The Red Bull comes good, and Ferrari miss out again – and what’s happening with Mercedes? Karun’s latest from the paddock 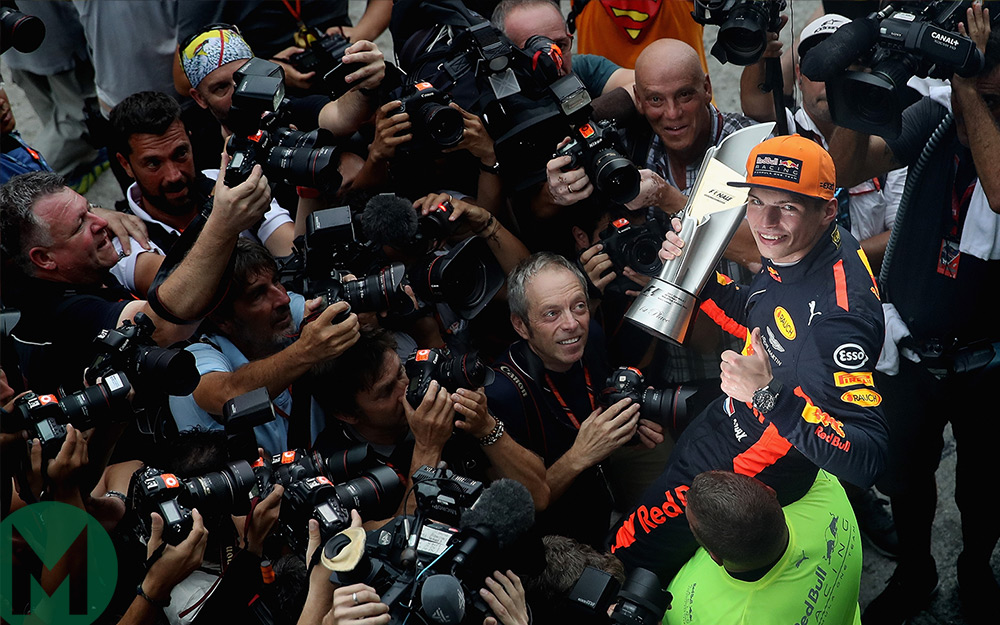 It was a typically hot and sweaty weekend in Malaysia with a bit of rain, but not as much as we have seen on previous occasions. All in all it’s a real shame to lose the Malaysian Grand Prix, it’s a fantastic race track and the first F1 track I drove at way back in 2001. It was just a couple of years old then and it was such a path-breaking venue in terms of a modern Grand Prix circuit. It’s a great track, the drivers love driving it and I have great memories of racing there. Such is life, Formula 1 will keep going.

The race was a great send off. If you would have said on Sunday morning that you were going to bet on Max Verstappen overtaking Lewis Hamilton on track and beating him by 12.7 seconds in a straight fight – there’s no way anyone would have believed it. When Max passed Lewis we heard Lewis on the radio talking about de-rate so we thought he would come back at him. But then the gap went very quickly to two seconds and it just went up and up. They were completely in control of the race, he was managing his pace, managing his tyres, managing the entire Grand Prix. It was a really impressive performance, and I think – I might be wrong – it’s the first time Red Bull has won a race in a straight fight without other people’s misfortune, weather or incidents. This is the first time in the hybrid era. That’s a massive pat on the back for Adrian Newey, Rob Marshall, Paul Monaghan and all the people involved in Milton Keynes on the chassis side but also on the Viry and Renault side. They have had a lot of reliability issues across the season, and Max in particular has been strong and competitive only for reliability issues to cost him.

I interviewed Jos Verstappen after the race and managed to get outside the Red Bull pits just when Max crossed the line and Jos is a hard man, a tough nut to crack, but even he shed a tear. The Dutch TV guys went absolutely crazy. Somebody tweeted me various people around Holland celebrating and it’s huge news. Max is a genuine star of the future and what was really impressive was the fact that he sat there in the lead and looked 100 per cent comfortable. At 20 years old he is so comfortable in that position: ‘hey, I’m here, I’m leading the Grand Prix, I belong.’ He’s not daunted by it at all, he acts like he belongs there and he really does.

I believe that this year Max has been the stronger of the two Red Bull drivers but because of bad luck and reliability the points tally doesn’t reflect that. I was so glad to see him win one on merit.

This was the weekend it all went completely away from them. Singapore massively hurt Ferrari’s chances with Hamilton fifth, Seb on the front row but he was overly defensive and he gave away 25 points. Sepang was a weekend where on Thursday we would have said Mercedes was still favourites, with Ferrari close. We would never have thought that Ferrari would have had the fastest car and really there was a chance to get Ferrari to get first and second because Kimi was on top form. Maybe Max third, Lewis fourth. There was a real chance for Sebastian to pull back points in the championship battle. They let it slip.

Reliability has been a real issue for Ferrari this season, and not just with Sebastian. At least he recovered and got fourth, and being within half a minute of Lewis at the end shows he would have been right in that fight. Kimi qualified within half a tenth of pole and didn’t even make the start. That’s a massive disappointment for them. If they have to think about when the title is lost they’ll think about Singapore and Malaysia. There’s no getting away from the fact that reliability has cost them.

It was an interesting weekend. Talking to people up and down the paddock, different engineers, Pirelli, and nobody is able to give a clear answer to why Mercedes was not competitive. Certainly they seem less consistent, there are more ups and downs than we’ve seen in the past. And when they’re weak, there doesn’t seem to be a real clear reason why. One theory I most believe is that on a green track the Mercedes isn’t able to get the tyres in the right window. We know the Pirellis are very sensitive to track temperature, conditions, the amount of rubber on track and the asphalt. This was new last year and 12 months on that bitumen that holds it all together was breaking up on the racing line so the grip was significantly lower than it was. There’s a theory that the lower grip surface is something that hurts the Mercedes – we saw it on the Friday of Baku and the Friday and Saturday at Budapest and Sochi. On the Sunday the car comes alive, when the track is fully rubbered up. There’s a school of thought that on the lower grip surfaces the Mercedes isn’t able to get a consistent tyre temperature balance and that may be something that is hampering the performance.

I don’t think it’s something that’s easy to fix, either, because if they had a clear answer and understanding of how to address that they would have by now as there are some extremely clever people on that pitwall. I’m interested to see what happens at Suzuka because in terms of layout it’s pretty similar with lots of medium/high-speed corners and changes of direction, a couple of braking zones, maybe fewer slower corners but the asphalt is really grippy. There’s lots of positive camber on the road and the surface has a lot of grip so if Mercedes can bounce back then that would add a lot of credibility to the theory I heard over the weekend. We’ll see what happens in Suzuka.

I have a couple of days at home in Madras before I head off to Suzuka. My parents have managed to keep the posters up from my youth – one is from 1990 and one is from 1997 where Goodyear celebrated 250 and 350 Grand Prix victories – so that’s a bit of memorabilia. See you in a week’s time in Japan.