Karun’s take on a riveting title-decider in Mexico, his view on Verstappen and where Hamilton’s title was won 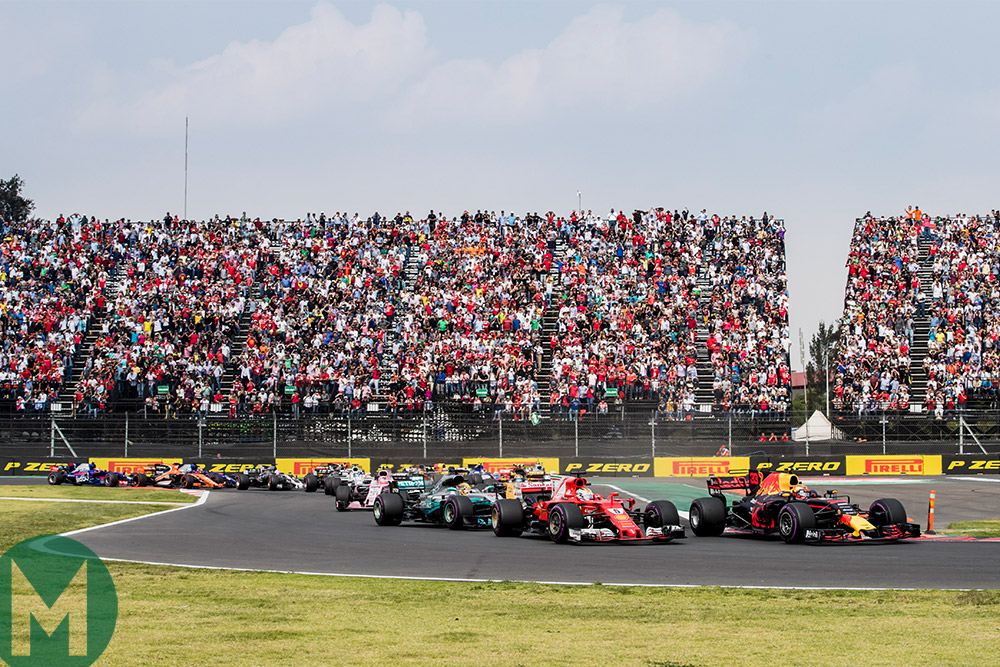 That was an exciting end to what was ultimately the World Drivers’ Championship battle. Obviously we’ve got two more races to go, but it was all settled in Lewis Hamilton’s favour in Mexico, as you would all know by now, I imagine.

The whole weekend in Mexico was really thrilling. We came from Austin with plenty of drama surrounding track limits and Max Verstappen’s penalty. Up in the paddock, wherever you went, all of the drivers and all of the teams were discussing whether or not he deserved a penalty. Most seemed to suggest, ‘yes’, and I agreed with that as I said after Austin. Like myself, a lot of people questioned how the consistency is applied across the track. I find it very hard to say that we should turn a blind eye for some corners and not for others: we should turn a blind eye when someone like Sebastian Vettel goes off at Turn 19 and gains a load of lap time.

They chose to turn a blind eye and yet they penalised Max who, of course, took a shortcut and deserved to be penalised.

So, I think the way these penalties are applied and the thought process behind it has raised a lot of question marks. It certainly was a big talking point after Austin, but even on the Thursday before Mexico. As the weekend began to unfold on Friday it was quite clear that we were going to have three cars in the fight. Red Bull looked on great form, as Daniel was quickest in FP2, though Max didn’t hook his lap together and you got the feeling that when he could hook it up he’d be fine. Ferrari was in the hunt as was Mercedes, so it really was interesting to see that despite the long straight, we did have three teams in the hunt.

It was nice to talk to drivers and hear for a change how they all had to manage the cars. I know we all want to see cars finish but, in some ways, if you look back to the ‘80s for example or the ‘70s the question of managing your car and looking after the gearbox, the brakes and the tyres – all of that was a big part of being successful in F1. Nowadays, the reliability is absolutely bulletproof and they’re all able to push 100 per cent, all the time.

In a way that’s taken away an element of the driving that the guys don’t have to do so much anymore.

Normally when you’ve got dense air, you’ve got a lot of downforce on braking and that helps deceleration and takes a load off the brakes. When you have 20 or 22 per cent less density due to the altitude, drivers have to rely more on the brakes and that puts a lot of heat and a lot of load on the brakes – discs, pads and everything – into the corner. That means that the drivers had to manage their brakes.

Lower downforce means that cars were sliding around a lot more through corners, unable to generate enough heat because there wasn’t enough load on the tyres. Therefore, into the slow corners, particularly the first six turns and the stadium section too, the cars were just sliding onto the top of the tyre. I went trackside to watch FP1 from different parts of the track; the circuit in Mexico really allows you to go right up close to the track and watch.

You could see drivers like Fernando Alonso, Verstappen, Daniel Ricciardo, Vettel, weren’t hanging around. For the first laps of the session, they were right on it. They also understood that there was an inherent lack of grip coupled with the lack of downforce, and the lack of abrasion from the asphalt. Therefore, they slightly underdrove and still carried so much speed – it was really impressive to watch.

Come qualifying on Saturday and the race on Sunday, Verstappen was just stellar. The talent that boy’s got is just amazing.

When he won the Grand Prix and you spoke to him afterwards it was none of this big ‘whoop-whooping’ and being over the moon, it was just: ‘I won the race, and that’s what I’m hired to do’. He was very non-plussed about it as if he’s on this planet and on the grid to win races. So it wasn’t a big deal to him that he won. I thought that was a really telling sign of where he is mentally. He believes if he has a car capable of winning the race, therefore he’ll win.

It was the same thing at Turn 1. He thought, ‘I knew to win the race I had to pass Seb into Turn 1, so I did’. There wasn’t an arrogance to it at all. In fact, because he’s actually a very down to earth guy, I think it’s that inner belief and inner self-confidence which is staggering to see from somebody that young and so early in his F1 career. I’m so, so looking forward to seeing whether Red Bull and Renault can give him a package to fight for race victories on a regular basis in 2018 because he will be an absolute force.

He was so dominant during the race on Sunday, and there were times when he was droning around. I think he did a low 1min 20sec and the team told him to slow down because people like Valtteri Bottas and Kimi Räikkönen were in the high 1min 20secs or low 1min 21secs. The next time Verstappen did a 1min 20sec again, they said ‘Max, come on, that was the same lap time’, and he replied ‘oh sorry. I thought I was going slow!’ He did a 1min 18.9secs late in the race which I don’t think the team was happy about and he just said, ‘oh was that the fastest lap?’ It was a psychological advantage to show to people that if he wants to, he can win the race by 40 seconds. In the end, he won it by more than 19 seconds, anyway. It was probably the most dominant victory I think we’ve seen this season, or certainly for a long time. It was pretty outstanding.

Was Lewis hit on purpose?

The biggest story of the weekend was Lewis winning the drivers’ championship. After the first lap, it was all pretty dramatic. There were a few people on Twitter, and I think Lewis questioned it as well, asking whether Seb hit him on purpose. Even after the race, he seemed a little unsure.

My personal view is that when Max passed Sebastian, Seb tapped the back of Max coming out of Turn 2 and damaged his own wing. Then, he was just a little bit put-off by that and maybe a little bit distracted, leading him to misjudge how close he was to Lewis. When you watch the onboard frame by frame in slow-motion, Lewis was on the outside, Seb on the inside, and Seb stabbed the throttle and got a flick of oversteer, which makes it look like he steered into Lewis. That’s why some people questioned it. When you play it with the audio you can hear that he had a bit of wheelspin and that caused him to countersteer, effectively, and at that point, he’s touched Lewis’ tyre. 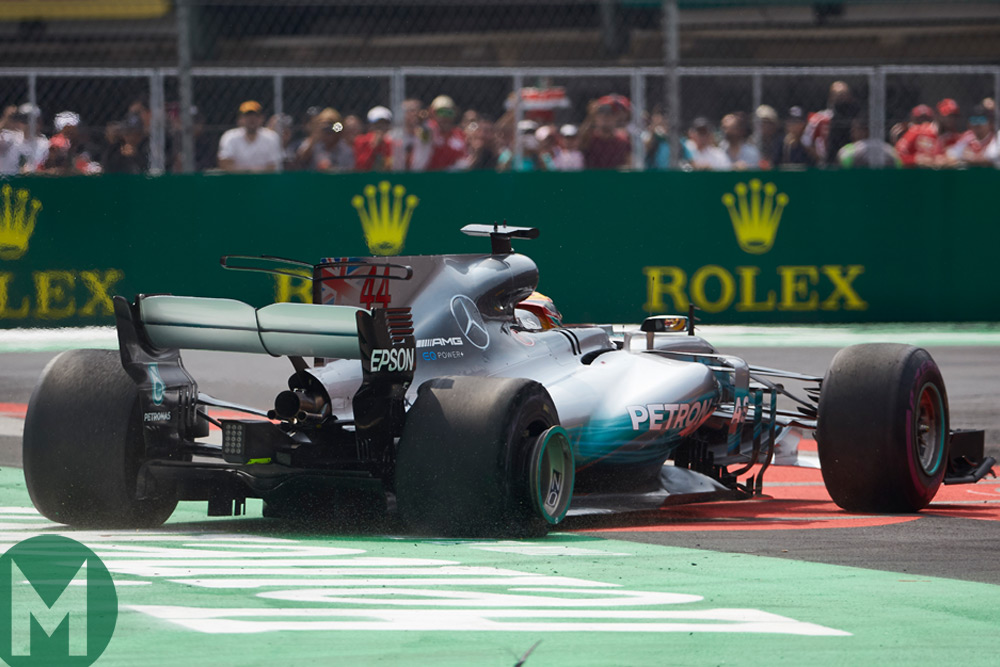 I don’t think Vettel did it on purpose, I think he misjudged it.

I think Vettel’s obviously more to blame than Lewis because Lewis did everything right. Lewis gave him plenty of space, he’s all the way to the outside of Turn 3 in an opportunistic move. It made an interesting race, because Mexico, although it’s an amazing event with grandstands and the crowd and the parade before the race, the racing itself can be quite dull. That’s just because the slipstream effect is so poor due to the high altitude and thinner air, that the drivers don’t get such a great slipstream down the long straight and it’s difficult to follow through the esses in the middle sector of the lap.

The racing can be a bit dull but this year we had Seb and Lewis coming through the pack, the World Championship at stake, and a great bit of battling between Alonso and Hamilton. I thought both of them gave each other a lot of racing room, a lot of respect, hard but fair, and I thought that was all really nice to watch. And in the end, the best man won the World Championship.

How the title was won

The Championship, although it was sealed in Mexico, was won across the season and ultimately, to me, Hamilton showed great maturity this season and made no mistakes. He showed maturity after Baku when he could’ve been pretty nasty; he dealt with it really well. He took disappointments on the chin and he bounced back on a regular basis. Maybe he underperformed a little bit at Sochi and Monaco, and in qualifying in Budapest, but nothing significant. It’s been just brilliant consistency, especially when it came to those Q3 laps.

A final couple of races and now with both championships settled, it’s all about whether Red Bull and Max can win any more races or Daniel for that matter. I think Ricciardo was super unlucky in Mexico, and Renault has admitted it got the engine strategies wrong.

We saw both Toro Rossos have trouble on Saturday, Brendon Hartley on Sunday, Ricciardo and Nico Hülkenberg too – that’s a lot of issues for Renault, which it won’t be happy about. Max has scored more points than anybody else in the last four races, so, if Renault can hold it together, it will be fascinating to see if Red Bull can win another one in Brazil, and I’ll see you then in a couple of weeks.