During the course of an interview with the BBC last Saturday, Mr Ecclestone invited us to consult a dictionary to check the meaning of the word ‘conspiracy’.

For those of you who either missed the interview, or failed to take up the invitation, allow me to clarify the definition of this word. A conspiracy is ‘a secret plan to carry out an illegal or harmful act, especially with political motivation’. 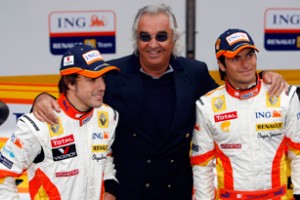 You will have guessed that the word, recently much-used by the media, came up in the context of what has become known, by the media at least, as ‘Crashgate’. You will decide for yourselves whether or not the unusual strategy employed by the Renault team at Singapore in 2008 was, in fact, a conspiracy. Certainly it was a secret, it might well have been harmful, and the motivation could be seen as political in the broadest sense of the word. But whether or not it was illegal is open to debate. The FIA, and the World Motor Sport Council, would undoubtedly see it that way. A civil court of law would probably have difficulty in establishing that an illegal act had been committed. 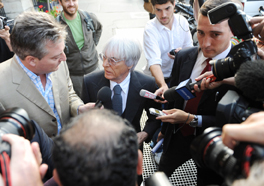 I mention this for two reasons. Mr Ecclestone, as is his prerogative as the public face of sport’s commercial rights holder, stoutly and oh-so-cleverly defended the FIA’s decision not to ban Renault from taking any further part in Grand Prix racing while at the same time suggesting that Mr Briatore’s lifetime ban was perhaps, and upon reflection, a little harsh. “You don’t get that for murder,” said Bernie. Well no, you don’t. And nobody died. But what is slightly worrying is that neither Mr Ecclestone, nor Mr Mosley, appeared to accept that the sport had suffered any serious damage as a result of the controversy

Some might beg to differ. Among those, presumably, are the senior executives of ING, the Dutch financial conglomerate.

While on the subject of conspiracy, it was surely a mighty relief to many, if not to Romain Grosjean, when the number eight Renault was safely parked in its garage after just three laps. The brake problems encountered in qualifying had not been solved. The prospect of Alonso’s team-mate visiting the wall during the course of the race was surely too awful to contemplate. A relief all round then. 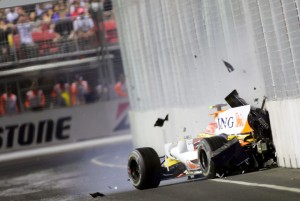 The Singapore Grand Prix may not have been the most exciting motor race you’ve ever seen, but it was without a major controversial incident. Furthermore, it was a spectacular occasion and the grandstands were full. Not only that, but we saw Lewis Hamilton at his majestic best, the renaissance of McLaren gathering speed, and the silver MP24 looking superb under three million watts of street lights. Not to mention Toyota in the top three, just a week before Suzuka, and Jenson Button taking one more small step towards becoming the 2009 World Champion. And, last but not least, the BMW team admitting to a mistake with the ballast weights and taking a penalty on the chin.

All we need now is for Mr Button to triumph in Japan and return home with the biggest prize of them all. Just as, all those years ago, we crawled out of bed at dawn and sat nervously in front of our televisions to see James Hunt come through the mist and rain to win his world title. I do not wish to be overly patriotic, but this would surely be the right result for a team and driver that have achieved extraordinary things this past season.

We have had more than enough conspiracy, however it may be defined. Albert Einstein is credited with saying that the only reason for time is so that everything doesn’t happen at once. I think we’d all agree that more than enough has been said, and the dents will only be beaten out with time. For now, we should sit back and enjoy what looks like being a very intriguing and exciting end to the season.