When John Barnard arrived at Ferrari from McLaren for the 1987 Formula 1 season, he found a team in desperate need of fixing.

By season’s end the Scuderia had achieved two victories after a barren spell dating back to 1985, but Barnard had to do it the hard way.

In Motor Sport’s latest Engineering the Greats podcast, the pioneering designer reveals how the culture changed as he moved from working for Ron Dennis to Enzo Ferrari.

“Enzo brought me in there and Enzo’s way of operating was to pit people against each other and see who was going to come out of the knife fight with the least cuts,” he said.

Barnard won his early battles. His success at McLaren, where he had developed the first F1 car with a carbon-fibre chassis, winning championships with Niki Lauda and Alain Prost, had earned him the clout to join on favourable terms.

“I think I was really brought in because [Enzo] realised that you couldn’t do it all with the engine,” says Barnard. “Ferrari was an engine-based operation. He brought me in because he’d been watching the McLaren, seen we knew what we’d been doing aero and chassis-wise, and so that was fundamentally why he got me in there.

“They used to have sit down lunches with table cloths and wine on the table, very civilised but nothing to do with Formula 1”

“They came back and said what about if you could set up an office in the UK? At the end of the day I don’t care what anyone says, Ferrari is Ferrari, you have to go there once.”

Barnard ended up with a Guildford office, but still managed to ruffle feathers in Maranello when he ended the team’s long lunches. “It was actually Marco [Piccinini] that came to me and said ‘What would you do at McLaren? What would you do at lunch time?'” syas Barnard. “I said because there’s always stuff to do on the car the guys would have a sandwich, spend 10 minutes somewhere and then get on with stuff.

“They used to have sit down lunches with table cloths and wine on the table, very civilised but nothing to do with Formula 1. He said ‘yes I thought so. Do you think we should change?’ I said ‘I think we should Marco, it’s really not a good way to go about Formula 1’.

“‘Leave it to me’ he said, next thing I know, that was all banned and it was my fault!” 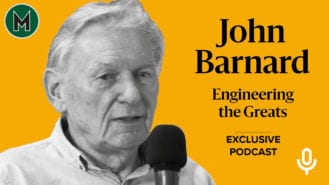 https://youtu.be/86ZDexFKKuM John Barnard wasn't just headhunted by Ferrari. Such was his clout that Enzo allowed him to set up his own design operation in Guildford, well away from the scrutiny…

But it was cold oil rather than lunchtime wine that saw Barnard finally meet his match.

It all led to a memorable ‘dressing down’ from Enzo Ferrari, who cut a typical enigmatic and unruffled figure at the head of the Prancing Horse during Barnard’s tenure.

“I do remember having been, for the first year I was there, I think it was the Sunday Times sent a journalist to follow me around for a week and I got talking to this guy and a lot of it was supposed to be off the record.

“I remember saying something like – because I’d been given a Ferrari road car to use, ‘the trouble is, I leave the garage in the morning, with the oil cold I can’t get first gear, I can’t get out without reversing because there’s not enough steering lock, there’s no ABS on the brakes that I can get on a Fiat Croma no problem at all’

“I then looked at his article before it went in the magazine and I was saying ‘take that out, take that out and take that out’, and when the magazine did run a lot of it was in and the road car factory saw some of this stuff, it wasn’t all in there but there were bits and pieces.

“They went storming off to Enzo and there was almost going to be a strike and so Enzo got me in and said ‘you’ve got to say something, you can’t say this and you’ve got to fix it’ – that kind of thing. So I made a statement saying that it wasn’t as bad as this or it was misinterpreted or whatever. I remember that caused quite a big stir.

“Even though I didn’t speak Italian and he couldn’t speak to me, there was a bit of a smirk on his face when he was going through it, because he knew the problems there were with the road cars.”

Listen to the podcast below