Small gains but a big impact: our review of Codemasters’ latest release in the F1 series 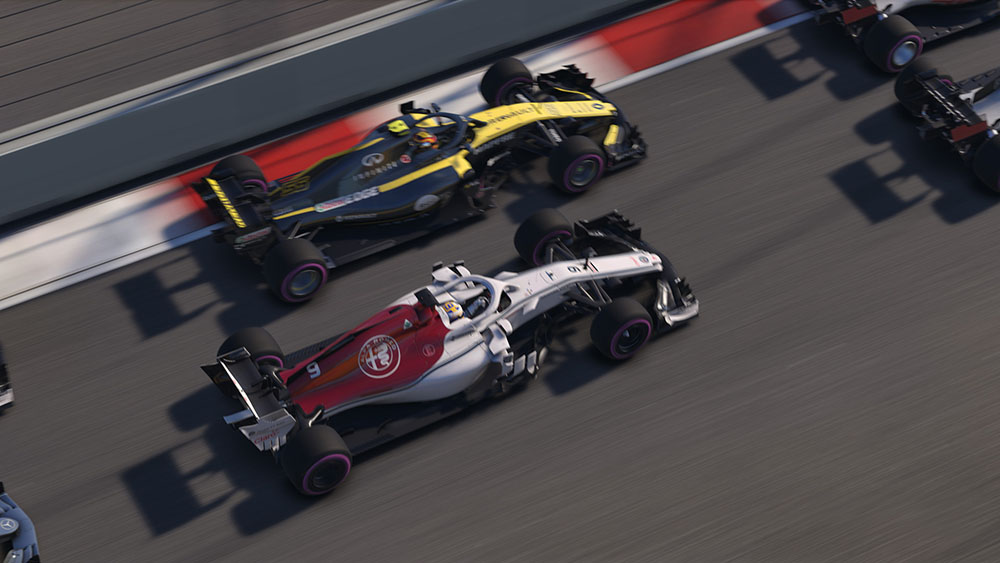 F1 2018’s gains have been marginal, but in a sport such as Formula 1 even the smallest tweak can make a huge difference. This approach from Codemasters has made its latest iteration the strongest yet, and it’s all down to the game’s focus on a single-player mode.

This year’s career mode will be familiar to those who have played F1 2017. Pick a team and you’ll be introduced to your engineers and agent, then given a seat at the team’s motorhome – one of many new environments added this year.

Jump into your first practice session and, once again, the team programmes such as track acclimatisation and tyre-wear evaluation remain the same. Why fix what doesn’t need changing? It’s a system that incentivises the player to participate in practice and gain points that can be used to improve the car.

Luckily, this time around development points are handed out a bit more generously, meaning that you don’t have to grind through the team exercises quite so thoroughly to gain an upgrade.

The role-playing, game-style upgrade system has undergone an overhaul, with the more powerful modifications hidden from the player’s view: picking a development path is shrouded in mystery, so there’s no guarantee that a focus on aerodynamics, for example, will yield the greatest improvements.

Older machines such as the Ferrari 312T are a real handful…

Regulation changes, which don’t alter the car’s look but do stymie development progress, again implement an element of insecurity when it comes to upgrades. You could choose to spend points on adapting your upgrades for next season, or go for broke and modify this year’s car as much as possible, knowing full well that next year’s won’t benefit at all.

The game sells itself on the new feature that has you interacting with an FIA reporter and cameraman (who resembles a real-life FIA F1 pass holder, according to our staff photographer). They’ll corner you post-race and the answers you give affect department morale, but the system isn’t as nuanced as it should be. You can easily answer questions fully knowing the impact that they’ll have in order to boost the morale of a particular group back at the factory. But it’s a fun feature and does make the player feel more involved, if not completely immersed.

That lack of immersion may be down to the slightly robotic and mostly silent characters around you, and the lack of interaction – apart from on track – between you and your rivals. But, once again, when it comes to the racing, the lifestyle components of F1 2018 fade into insignificance.

And that’s because the AI in this year’s release completes the racing package along with the solid physics, which (apart from the apparently overhauled suspension characteristics) have largely been carried over from last year’s release.

Your offline competitors will jostle for position and give anything but an inch if you try to overtake them, and very often you’ll feel the need to back off. The addition of an energy recovery system (ERS), and the ability to deploy it manually, adds yet another layer to this simulation. On a wheel, navigating the fuel modes and engine settings is already a bit of a task, and if you find yourself juggling unsuccessfully with the myriad options given to you while driving at full pelt, then ERS deployment can be set to automatic. But the fully committed sim racers will want to have full control, and that’s finally an option.

Turn the assists off and race in the rain – which looks spectacular in this year’s game – and the learning curve becomes precipitous. The ‘flashback’ option, we hate to admit, becomes a bit of a crutch in these situations.

When it comes to multiplayer, the game has received a full overhaul in the same vein as Gran Turismo Sport, with a new ‘superlicence’ system pitting similarly aggressive players against each other. Finally, Codemasters has found a way to siphon out online players who prefer to weaponise their own F1 cars. We haven’t tested the multiplayer component, but its efficacy will become apparent in the coming months.

If you need a break from career mode, 20 new classic cars have been added to the game and it’ll take a fair bit of practice to master their different handling styles. In particular, older machines such as the Ferrari 312T are a real handful compared with the Red Bull RB6.

F1 2018 shines when it comes to the racing itself, and while the media components leave something to be desired and visuals need an overhaul – something they will presumably receive next year – race simulation is at its finest with Codemasters’ latest release.