Formula 1 has released its global audience figures for 2020, which reveal that the Hungarian Grand Prix was the best-watched race of the Covid-affected season.

The third round of 2020 recorded a seven per cent increase in viewers, compared with the 2019 Hungarian race, which amounted to 103.7m viewers.

That was more than the season-opening Austrian race, the tyre-affected Silverstone rounds, and the dramatic Bahrain Grand Prix.

Valtteri Bottas headed into the Hungarian weekend as the championship leader and lined up alongside Lewis Hamilton at the front of the grid. The pre-race drama was stoked as the cars assembled, when Max Verstappen ran into the barriers on the way to the grid, leading to a race against time for Red Bull to prepare his car for the start of the race.

Despite Hungary’s success, the number of F1 viewers continued to fall last year, which promoters largely put down to the reduction in races from 22 in 2019 to 17 a year later.

The average number of viewers per race dropped 4.5 per cent to 87.4m and the total number of unique viewers was 433m, down on the 471m recorded last year, which was also a drop on the previous season.

New circuits performed strongly, with 100.5m viewers for Portugal, 98.1m for the Bahrain outer loop and 89.1m the Turkish GP.

In a statement, Formula One Management (FOM), which owns F1’s commercial rights, said that all major sports have struggled to retain audiences during Covid-19, and that F1’s drop off is not as steep as other rival leagues and series.

“Last year was an unprecedented time for everyone and Formula 1 had to adapt to the challenges presented by the pandemic,” New F1 CEO, Stefano Domenicali said.

“We delivered 17 races, something many thought impossible earlier in the year. The audience figures for 2020 show the strength and resilience of our sport, with average audience figures in 2020 at 87.4m and a total season cumulative audience of 1.5bn.”

FOM says it experienced an increase in viewership across several key markets and attributed the gain to the season taking place predominantly in Europe and the Gulf. It said that audiences grew 43 per cent year-on-year in China, 28 per cent in the Netherlands and 1 per cent in the U.S. despite no local timezone races taking place in 2020.

With fans kept away from the circuits for the majority of the season, F1’s social channels grew soared throughout the year, increasing followers by 36 per cent and engagement by 99 per cent. across the likes of Facebook, Twitter, Snapchat, TikTok and Instagram. 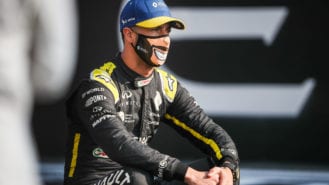 Will Daniel Ricciardo ever get to fight for an F1 title? MPH

What is Daniel Ricciardo’s route to a world championship? On the verge of beginning a new partnership with McLaren, he’s a world champion calibre driver but in 10 seasons of…

Video views rose by 47 per cent to 4.9bn and the first-ever F1 Esports Series generated 11.4m live stream views across all digital platforms, a 98 per cent increase on 2019.

“We had strong growth figures in China, the UK, Netherlands, Germany, and the USA, combined with the huge boost in our digital figures,” said Domenicali.

“We saw only a marginal reduction in TV audiences, caused by multiple reasons but clearly driven but a shortened and limited geographical calendar compared to 2019, but something every major sport has experienced in 2020. We are proud of what we delivered in 2020 and know we have an incredibly strong fan base and audience platform to grow in the coming years.

“We are delighted our fans feel a strong satisfaction with the sport, our season, and the way we responded to the global pandemic. We are looking forward to the start of the 2021 season after the winter break and we know our fans are as excited as we are to get racing.”