Formula 1 has confirmed that the 2022 Russian Grand Prix has been cancelled following the Russian invasion of Ukraine, with F1 saying that it could not take place “in the current circumstances”.

The decision comes after sanctions from around the world against Russia, including sporting organisations taking action. This morning, UEFA announced that the 2022 Champions League final had been moved from St Petersburg to Paris.

In a statement, F1 expressed its sadness and shock of the events unfolding and confirmed that it too would no longer be going to Russia this season, with the race at Sochi cancelled due to the ongoing conflict.

“The FIA Formula 1 World Championship visits countries all over the world with a positive vision to unite people, bringing nations together,” the F1 statement read.

“We are watching the developments in Ukraine with sadness and shock and hope for a swift and peaceful resolution to the present situation.

“On Thursday evening Formula 1, the FIA and the teams discussed the position of our sport, and the conclusion is, including the view of all relevant stakeholders, that it is impossible to hold the Russian Grand Prix in the current circumstances.”

The statement leaves the door open for the decision to be reversed in the event of a marked change in the situation, but this is thought unlikely. 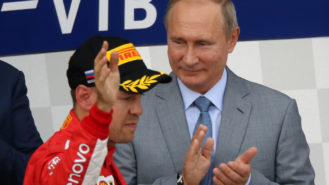 'I will not race in Russian Grand Prix' says Sebastian Vettel

Sebastian Vettel has said that he will not race at the Russian Grand Prix if it goes ahead this year, telling a Formula 1 press conference: "My decision is already…

F1 may have had its own revolt to deal with had the race gone ahead, with Sebastian Vettel, Max Verstappen, Charles Leclerc and Fernando Alonso each expressing their concerns if the race had remained on the schedule.

The Aston Martin driver was steadfast in his response when asked about the possibility on Thursday of racing in Russia, immediately announcing he would have refused to race in the country.

Yesterday Haas announced that it would run a white livery minus its Uralkali sponsorship and Russian colours for the remainder of testing following the invasion. The team has also removed all branding linked to the company overnight on its vehicles and in the garage.

It is unclear what the future holds for the team with its title sponsor facing sanctions from the wider global community.

Uralkali is a Russian potash producer owned by Dmitry Mazepin, an associate of Vladimir Putin, and father of Haas driver Nikita. It  could be one of the companies that may be targeted by sanctions.

Nikita Mazepin has been pulled from the FIA press conference scheduled to take place later this evening while Haas team boss Guenther Steiner has confirmed the team is reviewing legal options with regards to its Uralkali sponsorship ties.