Crock of gold or poisoned chalice? 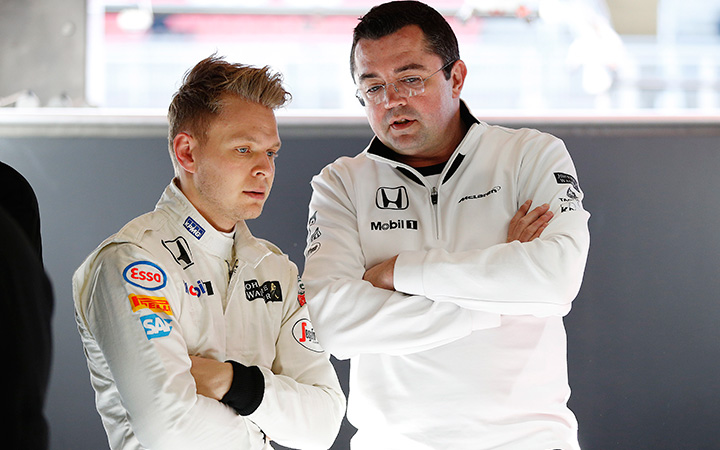 Be warned: it can go from Badoer to Wurz. 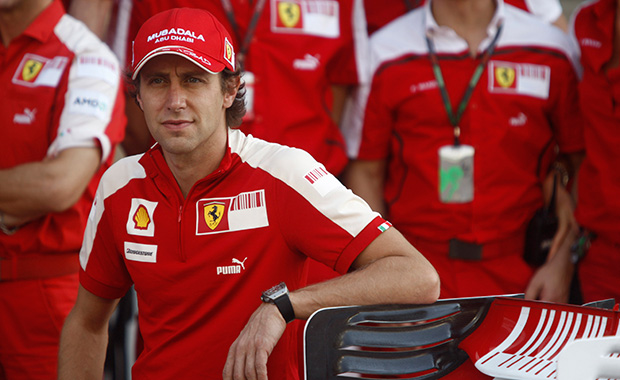 The former responded to a misplaced call from Ferrari in 2009 and made an unholy mess of replacing a recuperating Felipe Massa.

Whereas the latter’s stock rose, rather than be laughed at, when he came on as substitute for Benetton’s Gerhard Berger, laid low by sinusitis, for three Grands Prix in the midst of 1997.

Now it’s Kevin Magnussen’s turn at the wheel (of fortune) – as Fernando Alonso’s 11th-hour seat-warmer at McLaren in Melbourne.

The talented 22-year-old Dane has spent his recent career balancing perceptions of his family’s traits: precocious talent gone to waste – in F1 terms at least.

Father Jan was also 22 – and another hot property in danger of going off the boil – when in October 1995 he stood in for McLaren’s Mika Häkkinen, laid low by appendicitis, at TI Aida’s Pacific Grand Prix. 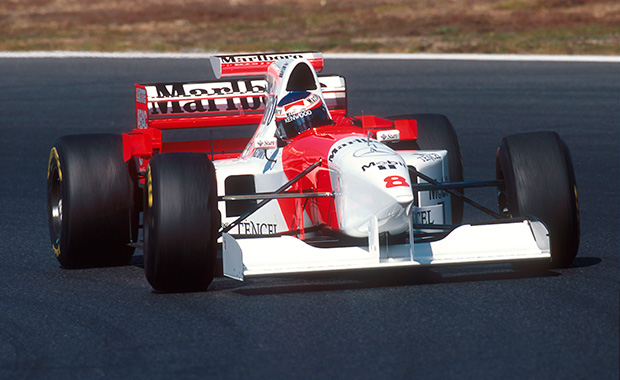 His assured Formula 1 debut – two places (12th) behind team-mate Mark Blundell on the grid and one (10th) in the final results – was meant to have been a springboard to arcing GP glory.

As was Kevin’s podium-on-debut in Melbourne 12 months ago.

Underperformance with a new and thus inconsistent team, Stewart Grand Prix, was what did for Jan.

Ho-hum consistency with a very well established but underperforming team mired in the midfield was what ‘did’ for Kevin – that, and the politics that go hand in hand with a switch of engine provider.

Now he must hide his disappointment under a bushel and shine. 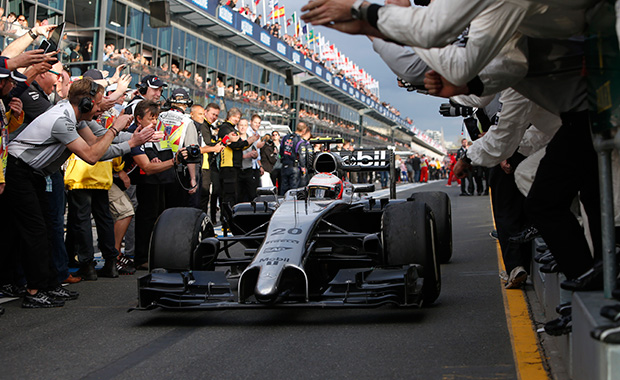 But how: to twist or to stick?

He knows the men and, to a lesser extent, their new machine – unlike some other F1 Johnny-come-latelys – but that might not necessarily be a good thing for a driver in need of shaking things up.

But then, if he were to rattle an MP4-30 against a wall this might prove to be his last roll of the dice.

At worst he needs to do a Wurz.

Or a Stuart Lewis-Evans. 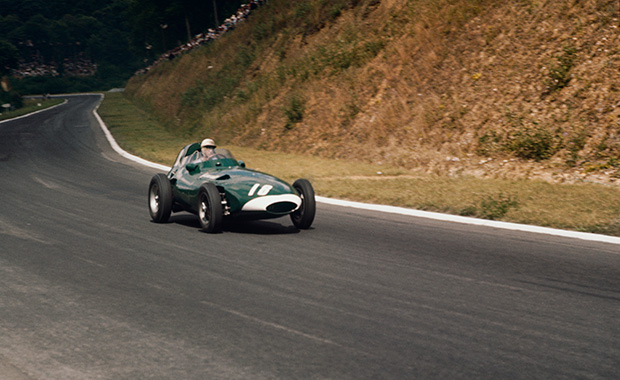 Vanwall in 1957 was the first great two-driver GP team: Stirling Moss and Tony Brooks. (Ferrari, Maserati and Mercedes-Benz tended to employ a number one and a phalanx of interchangeable support acts.)

But when Brooks was wounded in an Aston Martin prang at the Le Mans 24 Hours, and Moss was laid low by sinusitis, caused by water-skiing during a break near Cannes, Vanwall had to call on the experienced Roy Salvadori and GP newcomer Lewis-Evans as temps.

The latter was at Rouen for the French GP on the promise of a run in a Ferrari. When it became apparent that that would not be forthcoming – an irksome scenario with which Moss was familiar – the slightly built young man from Luton was among a number of drivers green-eyeing Stirling’s ‘abandoned’ car.

Lewis-Evans, on the recommendation of team manager David Yorke, got the nod from ‘Guv’nor’ Tony Vandervell – and performed well until a cracked cylinder head over-pressured the scuttle-mounted header tank, which in turn pressed with stiffening force against the steering column.

At Reims the following weekend – for a world championship GP in all but name – he qualified second alongside the hack Maserati 250F of benchmark Juan Fangio, and led with eye-catching ease until a worsening oil mist coated his goggles, and his gloves, rear disc brakes and Pirelli Stelvios.

The maturity he showed in finishing this 300-miler in third place was as impressive as his speed. 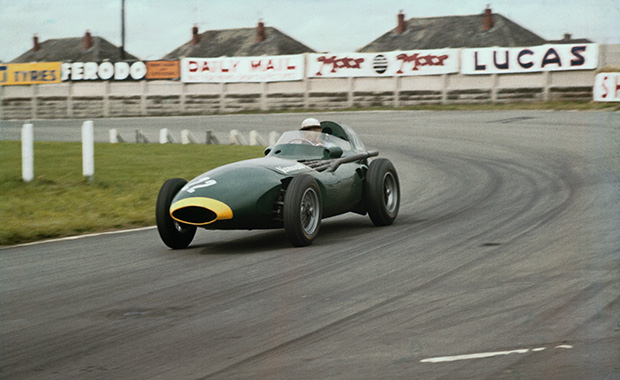 Thus Vanwall became a three-car team when Moss and Brooks returned in time for the British GP at Aintree.

But doing your Wurz – or Lewis-Evans best – is no guarantee of continued or future F1 employment.

When Jochen Rindt was hurt in a terrifying, car-banana-ing crash at Montjüich Park in 1969, Richard Attwood stepped up as Team Lotus’s Monaco stopgap and finished a meritorious fourth – yet he never raced in a contemporary F1 car again.

Neither Jean-Pierre Jarier’s fastest lap (by 1.5sec!) at Watkins Glen in 1978, as a replacement for the late Ronnie Peterson at Lotus, nor his subsequent pole position and dominant lead at Montréal secured him a seat with a race-winning team thereafter. 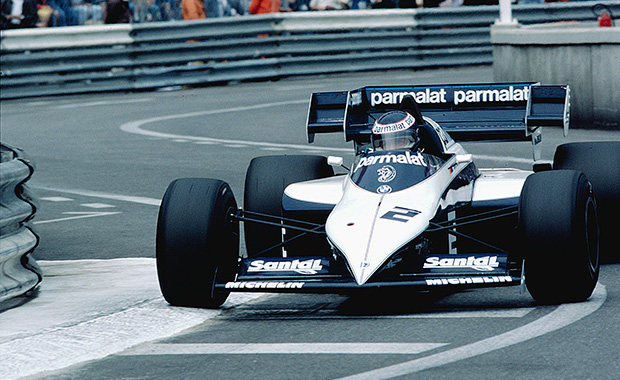 Corrado Fabi thrice did a solid job in elder brother Teo’s shoes at Brabham in 1984 – and was never seen again at the highest level.

Gianni Morbidelli was far from shoddy in the sacked Alain Prost’s Ferrari at Adelaide in 1991, but was back with struggling Minardi the following season.

And Nicola Larini’s second place at Imola 1994, where he subbed for a Jean Alesi hampered by a back injury sustained in a testing shunt at Mugello, was to be his last for Ferrari.

Larini’s cause probably wasn’t helped by his throwaway remark that sparked a furore about illegal traction control at the preceding GP, at TI Aida.

It’s so easy to put your foot in it when you’re a hired hand. 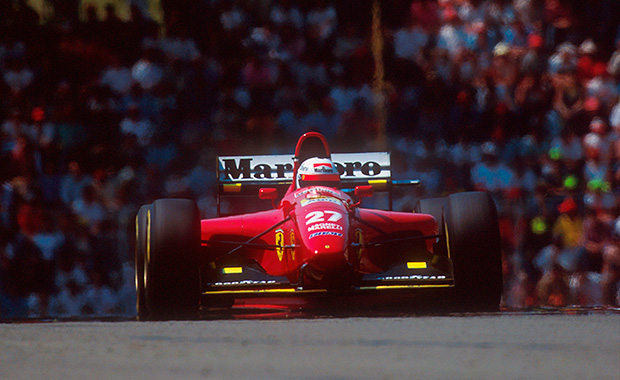 Later that same season Philippe Alliot bemoaned, innocently but aloud, why his Larrousse, which he was driving at Spa in the stead of a boracic Olivier Beretta, did not have the automatic upchange facility used by McLaren, for whom he had deputised for the banned Häkkinen a fortnight before at the Hungaroring.

The scenario can still be made to work.

Robert Kubica proved that in 2006, when an incumbent Jacques Villeneuve complained of a headache after his crash in Germany and, quick as a flash, BMW Sauber replaced him with the polished Pole. 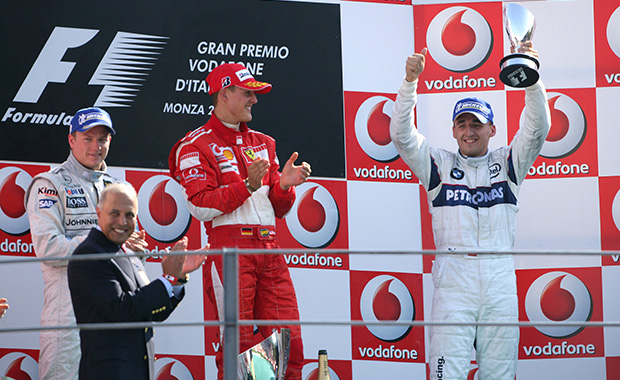 Sebastian Vettel also proved it, when he in turn replaced Kubica at Indy in 2007, after the latter’s bell had been rung by a violent tumble in Montréal.

So no pressure then, Kevin.

Simply replace the driver widely acclaimed as the world’s best, at the team that recently gave you a vote of reduced confidence, in a car-engine combination that carries a storied history but holds an uncertain near future. 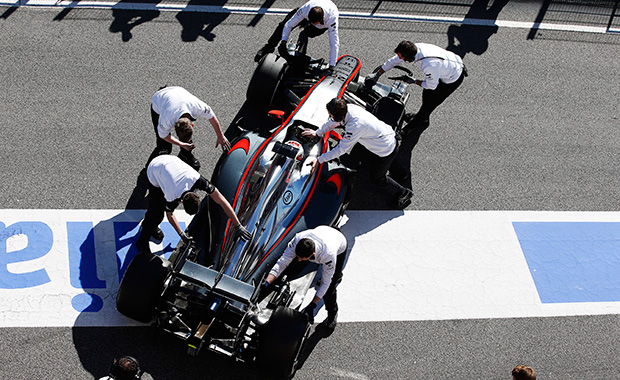 What could possibly go right?

And yet, who wouldn’t swap with him?

Ah, the fragile dilemma that makes F1 so compelling.

One minute its Gené is out of the bottle and all seems de la Rosa.

The next, everything’s gone South.