Valtteri Bottas finally restored Mercedes to the top of the F1 pile at the end of day two of testing after a tumultuous start to the reigning champions’s season.

A run on the C5 and softest compound tyre was good enough to put the W12 on top in the final hour, and ahead of Red Bull for the first time since Abu Dhabi last year.

Daniel Ricciardo kept up his record of finishing every session that he’s been driving as fastest, putting McLaren first in the morning session, while Fernando Alonso was back in a modern-spec F1 car for the first time with Alpine.

After two years away from the Formula 1 grid, Fernando Alonso returns today, as he tests the new Alpine car for the first time in Bahrain.

The two-time champion revealed yesterday that he would race throughout this season with two titanium plates in his jaw — a result of the cycling crash that interrupted his preseason training. However, he doesn’t expect it to affect his pace.

Sergio Perez and Nicholas Latifi also get their first taste of testing in 2021 for Red Bull and Williams, which leaves George Russell as the only 2021 driver yet to make an appearance on track. He is due to test on Sunday, after Williams gave test driver Roy Nissany a full day in the car on Friday. 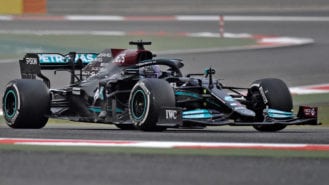 Mercedes will be looking to make up for lost time after its car was stuck in the pits for most of Friday with a gearbox problem that “came out of nowhere”. Team principal Toto Wolff has warned that the team will struggle to recover if it encounters further problems.

Yesterday was the first chance to see the 2021 cars in full, with Mercedes’ complex floor and Alpine’s bulbous airbox attracting attention.

But Friday may not tell the full story, with teams potentially saving some parts until later in the test. Last year, we had to wait until Day 2 for the appearance of Mercedes’ DAS steering system. could today bring another surprise?

Daniel Ricciardo set the pace and Fernando Alonso looked promising in the Alpine as Mercedes’ issues continued with a spin off for Hamilton.

The 7-time champion dropped it at Turn 13 and had to abandon his stricken car.

It resulted in a continuation of what represents the worst start to a hybrid season for the Silver Arrows since 2014, as a gearbox issue limited running for them on Day 1.

High winds caused trouble for others, as both Nicolas Latifi and Carlos Sainz flat-spotted tyres with spins.

After Mercedes’ troubles with a gearbox yesterday, Aston Martin ran into similar woes as Sebastian Vettel was kept in the garage for an extended period in the second half of the session.

The four-time champion made it back out in the final 10 minutes of the session but lost out on valuable track time versus rivals.

For the second day running though, it was McLaren and Ricciardo that led the way by the time the morning session came to an end.

Long runs took up much of the afternoon on day two, with teams running race stints and multiple-lap runs as they worked through run plans.

A brief on-track battle between Williams’s Nicholas Latifi and AlphaTauri’s Pierre Gasly took the attention for multiple laps as the Frenchman tried to find a way past.

Though full power modes won’t have been run, it took a late dive into Turn One after a few laps behind to clear Latifi even with DRS assistance.

Sergio Perez brought out the red flags in a bizarre incident that saw his engine cover detatch from the rear of his Red Bull and explode into plenty of carbon fibre shards on the main straight.

After the track was cleared, we got the first sight of what Mercedes might be capable of, with Valtteri Bottas desperate to catch up on the time he missed from yesterday morning’s gearbox issue.

He put Mercedes ahead of Red Bull for the first time in testing with a lap on the C3 tyre to go fourth fastest. That was until a flurry of soft-tyre runs in the final hour from the majority of the field.

Lando Norris and Gasly traded fastest times on the C4 and C5 tyres respectively until Bottas returned to the track on the softest C5 tyres to put Mercedes top of the pile for the first time since FP2 in Abu Dhabi last December.

Ferrari’s Charles Leclerc put in a time on the C5 tyres as well but couldn’t improve on P6, behind Alfa Romeo and Antonio Giovinazzi.

Lance Stroll made up for lost time at Aston Martin in the afternoon, putting the AMR21 third-fastest in the final 10 minutes on day two. Red Bull opted not to run a soft tyre in the closing moments, making it one of the only teams to choose not to.

Teams are running a single car, with most splitting the first day between team-mates. However, some drivers are being given a full day in the car, including Williams test driver Roy Nissany.

Below is the schedule for Friday.

What time does testing start?

Saturday testing starts at 10am Bahrain time, 7am GMT, which is the same each day this weekend. It’s split into two sessions: the morning session runs for four hours until 2pm, 11am GMT.

After a break, the afternoon session starts at 3pm, 12pm GMT, which lasts for a further four hours.

Local time in Bahrain is three hours ahead of GMT, so sessions start mid-morning local time and the testing day runs into the evening, ending at 7pm