Home advantage is in the main a psychological and statistical given. Familiarity with a venue creates a powerful force when combined with the will of the majority of its crowd. To overturn it is to risk the wrath of the sporting gods. Witness the furore caused by the rare penalties awarded against Man U at Old Trafford. The chanting is implicit but its effect is tacit – and the most even-handed can be swayed.

But does it exist in Grand Prix motor racing? 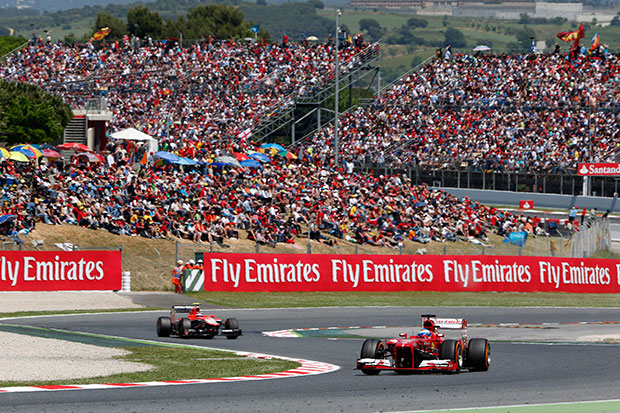 Even the annoyingly muffled trackside mics at Barcelona couldn’t fail to pick up the reactions of Fernando Alonso’s supporters to his every move.

Did he hear them? A commentating David Coulthard reckoned yes – as he himself did at Silverstone in 1995.

That has to make for a positive difference, doesn’t it?

One driver, however – was it straight-talking Mark Webber? – reckons it nothing but hokum.

If it was Webber, has he perhaps been coloured by his struggles in Melbourne since scoring those memorable on-debut brace of points for Minardi in 2002? He has yet to finish higher than fourth in his 11 subsequent attempts. Not only has luck not always been with him, but also he has appeared desperate to please on occasion. 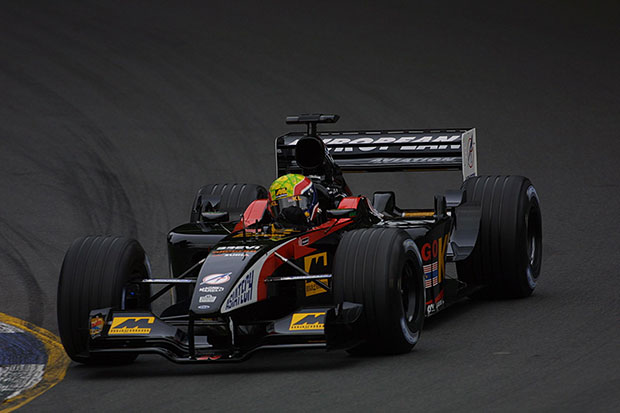 Indeed an Aussie has yet to win in Oz.

And no Belgian has won in Belgium in 57 attempts, despite Jacky Ickx’s love of – and speed at – the old Spa.

No Dutchman won at Zandvoort in 30 attempts.

Hungary has only Zsolt Baumgartner to show for its 27 hostings of a GP.

And Japan has hosted 28 and also exhibits a big fat zero in the home-win column – although Aguri Suzuki and Kamui Kobayashi scored their only podium finishes at Suzuka. 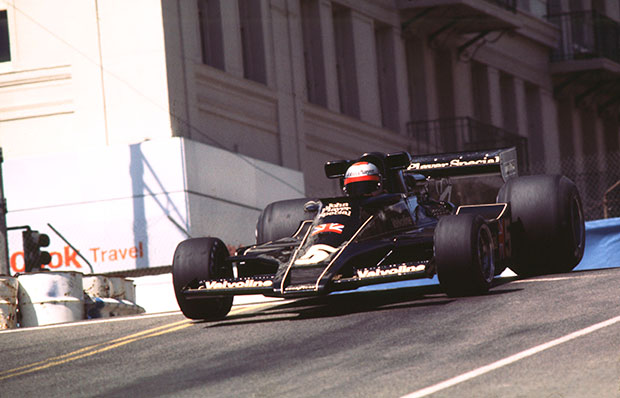 For the USA, it’s 50 – if you include Long Beach, Detroit and Dallas – and just one. Mario Andretti’s Lotus led only four laps of the 1977 US GP West, but they were those that mattered.

And Ronnie Peterson came within a last-lap puncture of winning the inaugural Swedish GP at the scrubby Anderstorp in 1973.

Perhaps Latin emotion is the clincher.

Giuseppe Farina (1950) and Alberto Ascari won the first three world championship Italian Grands Prix. But no Italian has won at Monza since ‘Lulu’ Scarfiotti in 1966. 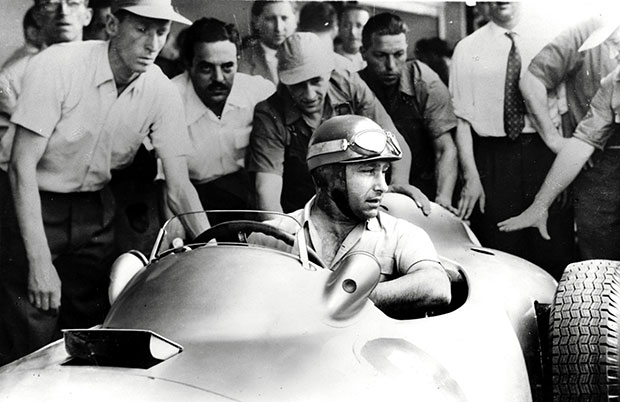 The consummate Juan Fangio won the Argentinian GP four times in succession from 1954-’57, although he had to share the third of these with team-mate Luigi Musso, whose Lancia-Ferrari he appropriated.

Not even Fangio, however, received more feverish support than did his super-cool compatriot Carlos Reutemann. Yet despite being on pole at Buenos Aires for his 1972 GP debut, ‘Lole’ never could reward it with a victory: two thirds, three seconds, but no win. Oddly, he won across the border in Brazil on three occasions. Four if you include the non-championship race of 1972.

Rubens Barrichello thrived on the samba emotion of Interlagos, and it fed off his embracing, honest response, but the win never came. Whereas Emerson Fittipaldi, twice a GP victor in Brazil, and Carlos Pace combined to make it three in a row from 1973-’75. Nelson Piquet and Ayrton Senna, though the latter had his trials and tribulations in his native race, added two apiece, before Felipe Massa made it nine home wins in total.

But that’s only one more – shrug – than Gallic Jean-Pierre Jabouille, Alain Prost and René Arnoux – four wins for Renault, plus three for McLaren and one for Williams – managed in France. And one fewer than those stony faced Northern Europeans the Schumachers – nine for Michael, two for Ralf – rustled up in Germany, if you include their six European GP wins at the Nürburgring. 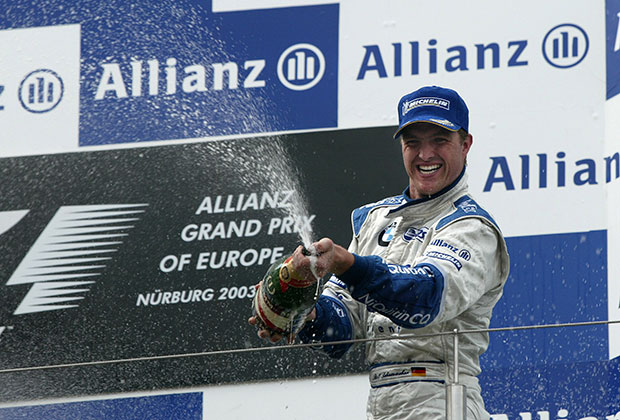 And even Niki ‘The Computer’ Lauda won in Austria in 1984.

Gilles Villeneuve prevailed in the first Canadian GP, 1978, at the Montreal circuit that bears his name today. And East London-born Jody Scheckter topped out for Tyrrell at Jo’burg’s Kyalami in 1975. This pair had wild streaks, but they were hardly Latin.

Then there’s the Principality conundrum.

Every driver wants to win in Monaco, but Frenchmen take a very particular delight. Maurice Trintignant, Jean-Pierre Beltoise and Olivier Panis scored their only GP wins here. All were surprises. Patrick Depailler, in another surprise, scored his first of just two. And Alain Prost won four times, including a hat trick from 1984-’86.

As for San Marino, an inherited victory for Elio de Angelis in 1985 must suffice for the Italians.

Upon reflection I would have to conclude that F1’s home advantage is weaker than some were it not for us stoical, reticent, play-up-play-up Brits. 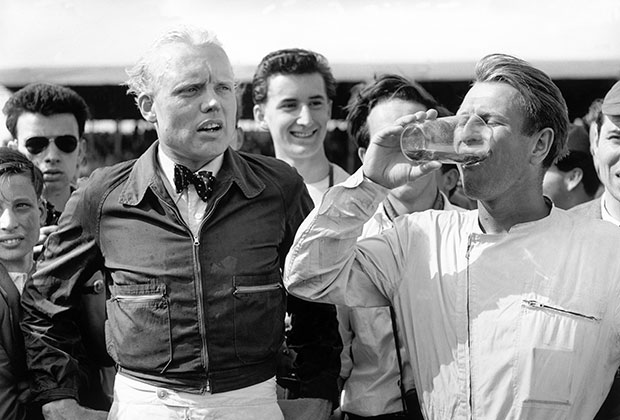 There was a time when our nation wondered if it would ever again win a Grand Prix. Then, 30 years after Henry Segrave’s victory in France, Mike Hawthorn provided a brilliant chink of light at Reims.

The man Mike beat on that occasion, Fangio, two years later deferred to the inevitable and allowed Stirling Moss to become the first British driver to win the British GP.

It was, however, the victory that Stirl shared with Tony Brooks at the same track, Aintree, two years later yet that truly opened the floodgates: Brits in a British car, a Vanwall, winning in Britain.

Peerless Jim Clark’s five wins in six years with Lotus. Stewart’s Woolmark win of 1971, after which his Tyrrell’s DFV was strip-searched by a dubious governing body. And Hunt’s in 1977, in the McLaren M26 that was lighter and stiffer but never as good as the M23 it replaced. 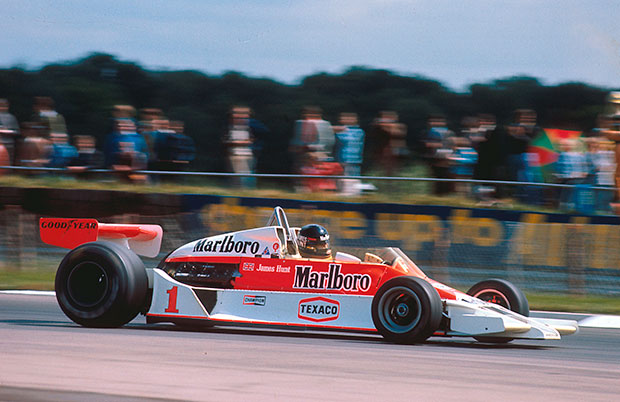 Ulsterman John Watson bringing the house down and ushering in the carbon-fibre era aboard John Barnard’s MP4/1 of 1981.

Williams-mounted Damon Hill hanging onto in 1994 what Dad Graham let slip through his BRM fingers in 1960. The fuzzy warmth created by Johnny Herbert’s success with Benetton in 1995.

DC at McLaren, doing a ‘Schumacher’ in 1999 and a ‘Mansell’ – albeit around the outside of Barrichello at Stowe – in 2000. And Lewis Hamilton’s sublime drive in the grizzly wet of 2008, ironically perhaps the sunniest, most carefree day of his McLaren career.

Britain’s GP has been won by a UK driver on no less than 21 occasions.

It’s 22 if you include Hunt’s at Brands Hatch in 1976. That win was ultimately taken from him, but the fact that he was inspired by a crowd that verged on a mob can never be erased.

And only two of them – fated Peter Collins’s day of days in 1958 and Stewart’s ding-dong dice with and victory over Jochen Rindt in 1969, both at Silverstone – were achieved in anything other than a car made in Britain: a Ferrari and a Matra (run by the most British of teams and powered by Britain’s greatest racing engine). 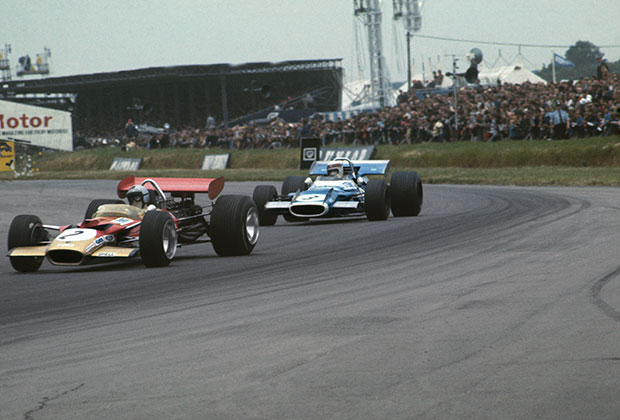 But there is more to this than weight of numbers.

Had Nigel Mansell been the only British driver to win the British GP, the manner of his four successes – five if you include his maiden victory in the 1985 European GP at Brands – would have been sufficient to overcome all statistical doubts. His withering defeats of Williams team-mate Piquet in 1986 and ’87: aboard the spare, set up for Nelson, at Brands; and that outrageous dummy at Silverstone. Plus his coruscating Copse commitment in Williams cars he very well could have simply eased to victory in 1991 and ’92.

Try telling ‘Our Nige’ that there is no such thing as home advantage in F1. He could put a figure on it: almost two seconds per lap. 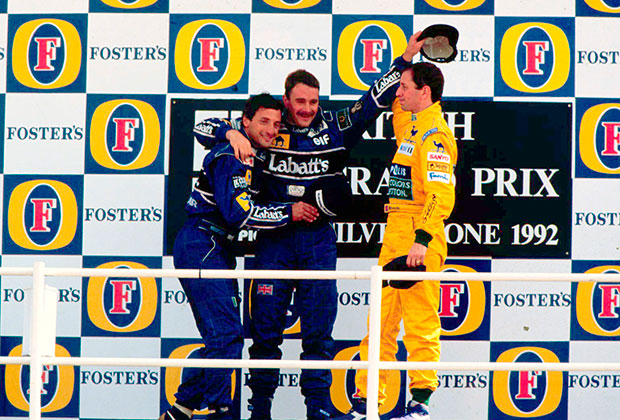 Hell would freeze over before Kimi Räikkönen could care less if there was a Finnish GP or not. Alonso, however, needs to win at home to feel complete. He has done so twice now – thrice if you include his beautifully constructed victory at Valencia last year. His joy on each occasion was unconfined. It’s this shot of passion, when added to his skill, relentlessness and cunning that makes him the best of a very good bunch.

That’s where his real advantage lies.