Fernando Alonso explains why the 2019 Daytona 24 Hours was so controversial, even though he was victorious 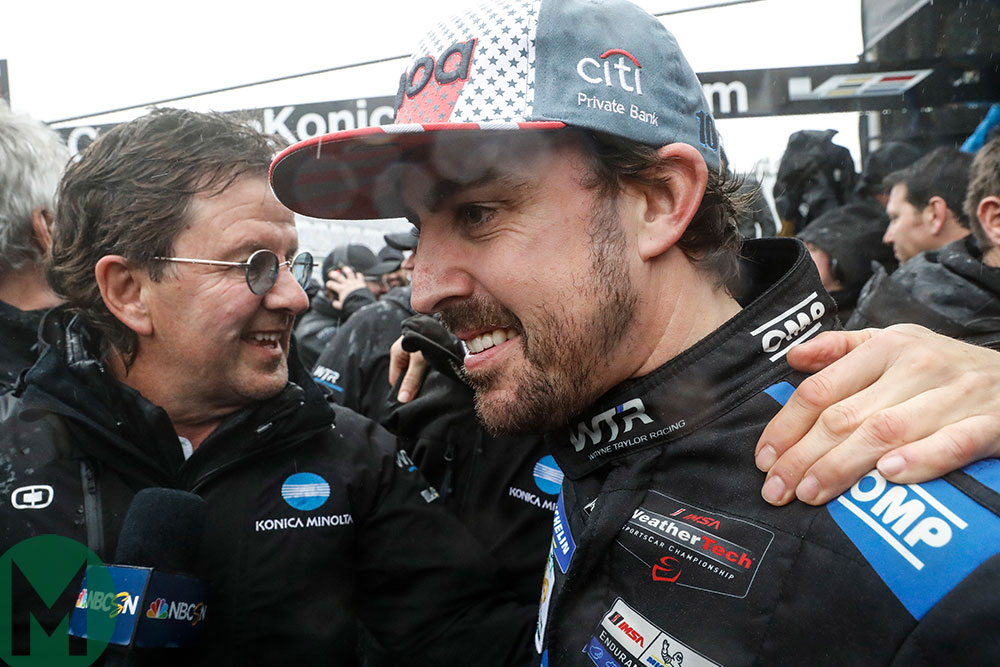 Yet he insists the win should not have been his, as he feels the rain-interrupted race – the result of which effectively declared two hours ahead of time – should have been stopped sooner due to the conditions, at which point he was second.

The 2019 running of the American Classic was stopped twice as well as had several full course yellow interruptions due to the rain and resultant incidents. Rain first fell at 5:30am – when nine hours remained – and shortly after that officials stopped the race for close to two hours. The second stoppage, with just under two hours to run, effectively ended the race as after no more running the result was called with around 10 minutes left on the clock.

Alonso benefited from the timing of the final stoppage as he took the lead shortly before when Felipe Nasr ran wide in his Action Express Cadillac. Alonso also was highly impressive in the wet conditions. Yet the two-time Formula 1 champion stated afterwards that the race should have been stopped sooner.

“I called a lot of times when I was second, over the radio, that safety car was necessary,” Alonso said.

“I think the last five, seven laps of the race, were not right. For anyone, because the visibility was nearly zero, we could not be flat out on the straights. The car was moving, that was coming in sixth gear, 200 mph. There were parts of different cars in different points of the track because people were losing the bodywork here and there. And I was calling the team for a safety car immediately because I could not see anything.

“Felipe went a little bit long into Turn One, we took the lead and we were just lucky today. But I think conditions were also okay to stop the race seven laps before they did and in that moment we were second.”

Alonso’s team boss Wayne Taylor corroborated the account. “Fernando Alonso is one of the most impressive guys I’ve ever seen,” Taylor said, “when I heard him come on the radio and absolutely talking in fear I suddenly realised, ‘Let’s not race anymore.’”

Many of Alonso’s fellow Daytona runners agreed that rain should have stopped play sooner. “I absolutely love racing in the rain,” said Richard Westbrook to Racer.com, who finished fourth in the GTLM class for Ford Chip Ganassi Racing. “I really enjoy the challenge, but that was just beyond a challenge. You’re just going down the straight, and you’re just thinking, if there’s anyone stopped, I’m toast and they’re toast. You could not see a thing.

“And because of the tri-oval around here…there’s a reason why NASCAR doesn’t race in the rain, because it’s just so difficult on an oval. You’re crossing white lines, you’re trying to avoid the puddles, the engine’s shutting off because you’re aquaplaning so much. It was just awful.”

Alonso’s co-driver Jordan Taylor accepted that the wet conditions suited the victorious WTR Cadillac. “When we saw the forecast we were kind of excited for the wet, knowing after qualifying that our pace wasn’t really there for the dry conditions,” he said to Racer.com. “Especially leaving the Bus Stop is where we lacked pace and that’s pretty much where you can pass on this track.

“So we knew it was going to be a long race if that was the case, but our goal was to make it to sunrise when the rain came and stay on the lead lap until that point. I think we played our cards right in the rain, and playing the long game rather than trying to have the fastest car in the dry.”