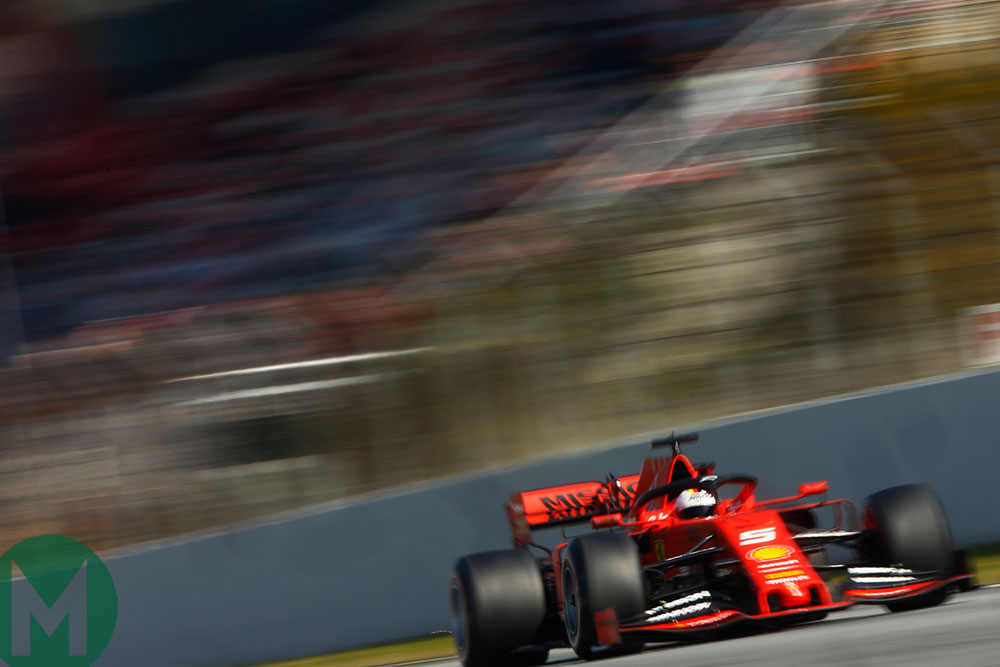 Ferrari ended 2019’s Formula 1 preseason testing still ahead of the pack as Sebastian Vettel set quickest time on the final day, but he was a mere three thousandths clear of Lewis Hamilton’s Mercedes.

Ferrari’s joy was also tempered by having to end its session early, after its car hit electrical problems this afternoon.

Vettel jumped to first place 45 minutes before lunch, with a 1min 16.352sec set on the softest C5 tyre compound. He then made two subsequent improvements in the morning’s session eventually to set a 1min 16.221sec, which remained fastest for the rest of the day.

It also was the quickest time set by anyone during the testing fortnight, beating his team-mate Charles Leclerc’s best from yesterday by 0.010sec. Vettel suffered electrical gremlins in the mid-part of the afternoon and, about an hour later, it was announced that the Ferrari would not return to the track for the balance of the day.

With about an hour of the session remaining, Hamilton all but matched Vettel’s mark with a 1min 16.224sec, also set on C5 Pirellis. Mercedes as usual split duties between its two drivers and Valtteri Bottas’s best from the morning was 0.340sec off Vettel’s, good enough for him to finish the day third overall.

Red Bull had a severely truncated day as its RB15 suffered mid-morning gearbox problems and was not seen on track for the rest of the day. Max Verstappen completed only 29 laps and finished the day 11th with a 1min 17.709sec on C3 tyres. He was the only driver today not to set his best time on C5s.

Nico Hülkenberg posted the fourth best time of the day with a 1min 16.843sec. Renault once again used both its drivers and Daniel Ricciardo, who was in the car during the morning, ended the day eighth with a 1min 17.114sec.

Hülkenberg was half a tenth clear of Toro Rosso driver Daniil Kvyat, who set a 1min 16.898sec. He in turn pipped Carlos Sainz (McLaren), who managed a 1min 16.913sec.

Haas was another team to split driving duties today and Romain Grosjean, who ran in the morning, finished the day seventh with a 1min 17.076sec while team-mate Kevin Magnussen was 10th (1min 17.565sec). Magnussen also caused a late red flag by stopping on track.

Kimi Räikkönen was ninth for Alfa Romeo with a 1min 17.239sec, while Racing Point’s Sergio Pérez was 12th on 1min 17.791sec. Williams once again propped up the times, Robert Kubica unable to dip below 1min 18.993sec.