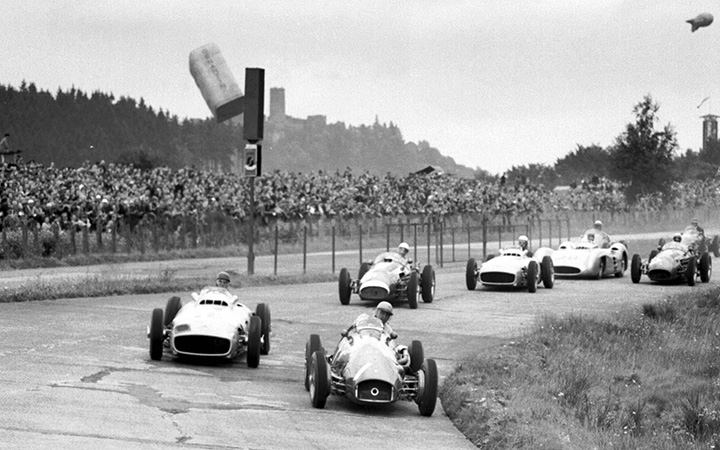 His emotions tended to run close to the surface: the unbridled joy of winning the 1951 British Grand Prix; the inconsolable tears after compatriot Onofre Marimón’s fatal crash at the Nürburgring in 1954.

He could be impassive – witness his stoicism during the late Latinate pitstop that threatened to cost him victory at Le Mans in 1954 – but at Reims for that year’s French GP he couldn’t hide his mood.

Hands on hips, face like thunder, back to the crowd – and to his toothless Squalo Ferrari, its bonnet charred by a flash fire indicative of a catastrophic engine failure – he was unequivocally grumpy. 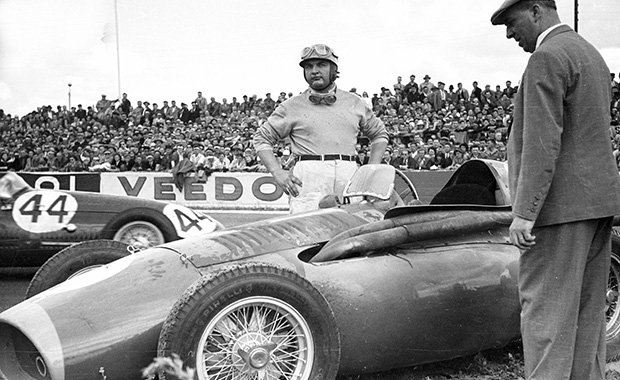 He’d been straining every nerve and sinew to keep the brand new Mercedes-Benz W196s of fellow Argentinean Juan Manuel Fangio and Germany’s Karl Kling in sight on the narrow, arrow straights through Champagne. But even Mercedes ‘junior’ Hans Herrmann, on his F1 debut, had given him more trouble than his car could handle in their battle for third place. That the latter’s engine also coughed – after setting fastest lap – was of little consolation: the Scuderia had been absolutely smashed.

Mike Hawthorn, whose Squalo had given him the fright of his young life when its engine failure left him with no brakes and no steering as he slid on his own oil towards a barrier lowered without a care across the escape road, remained remarkably upbeat.

He wrote in Challenge Me the Race: “We drivers were not unduly worried, as we felt confident that we could still match them [Mercedes-Benz] on a more twisty circuit where road holding and braking were more important.”

And Fangio, winner of that French GP – a result of which he had felt sure from the moment of his first test of the W196 at Reims, 10 days before the main event – suddenly had doubts. For hadn’t he spun while under zero pressure; Kling, an unwilling lieutenant at times, waited loyally for him to catch up. 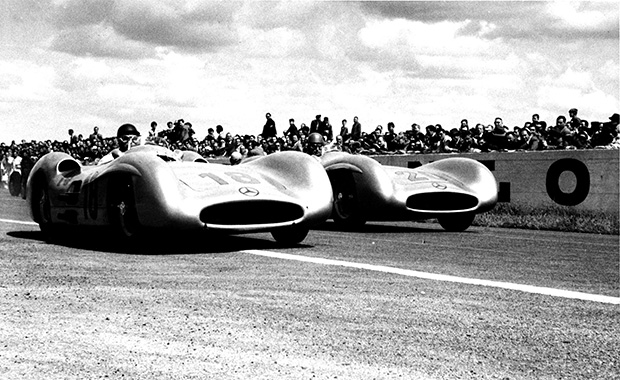 Fangio wrote in his eponymous autobigraphy: “When I looked in the mirror of my hotel room my confidence vanished. ‘Remember,’ I said, ‘no one ever won before crossing the line. So far, so good.’

“In the past I had seen what seemed certain victory disappear too often to run the risk again. I would continue to hope but in moderation, putting a brake on my spirits.”

And Denis Jenkinson’s paean to the sensational W196 – harbinger of F1’s “new era of science versus the rest” – concluded: “But as these words are being written before the British Grand Prix, I may have to eat this page ofMotor Sport.”

A fortnight later, at a disused WWII bomber base straddling the Bucks/Northants border, González and Hawthorn reverted to an older-type, more trustworthy Ferrari and finished 1-2, bloodying a Mercedes-Benz nose already broken by the concrete-filled barrels that marked the circuit’s extremities.

The bottles of Champagne that the latter had brought, with confidence rather than in hope, remained unopened. The bubble had burst. 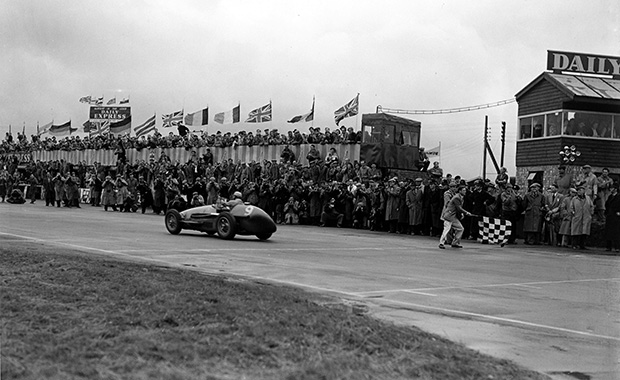 Despite its wind tunnel-conceived-and-assessed streamlined (rather than aerodynamic) bodywork, its computed spaceframe (every tube in either tension or compression), its Bosch direct fuel injection, its desmodromic valve gear, its synchromesh gearbox, its inboard brakes, its torsion bars within torsion bars… W196 was a handful, with its unfashionable low-pivot rear swing-axles and unproven Continental tyres, on an undulating surface made slick by oil and rain.

The incomparable Fangio qualified on pole position, but the necessary consistency over 90 laps was beyond even his reach. Having to hold the car in fourth gear, before losing third entirely, his was a hopeless task. Lapped by González, who led from start to finish, he could do no better than fourth place: “Silverstone inflicted a sharp lesson on me.”

And upon his technical team, too, when it was discovered that his straight-eight had suffered three partial piston seizures and was exhibiting signs of cracks in its crankshaft.

Mercedes-Benz reacted as only a super-organised industrial giant can, providing an open-wheeled version of the car in time for the German GP. Fangio was victorious. 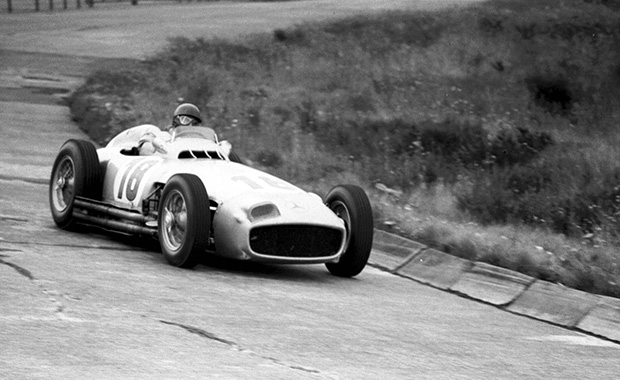 He also won the Swiss GP at Berne – but only after González had qualified on pole – and the Italian GP at Monza to clinch his second world title. The latter, however, was a lucky victory: Stirling Moss would have won but for a broken oil pipe on his Maserati 250F, and a guesting Alberto Ascari might have won had he not fluffed a downchange and over-revved his Ferrari.

The year’s final round was at Barcelona’s Pedralbes street course in late October – and Ascari’s Lancia D50 appeared at last. This compact semi-monocoque V8 design by Vittorio Jano was a svelte glove compared to a Krupp’s-steel fist. It led the early stages, from pole, and set the race’s fastest lap in fine style before retiring because of a clutch problem after 10 laps.

Ferrari hadn’t been standing still meanwhile. Its unloved Squalo had been transformed by replacing the transverse leaf springs in its front suspension with coil springs, and Hawthorn – team leader in the absence of González, injured at Dundrod’s RAC TT – was always in the mix for victory.

Which is more than can be said for Fangio. Losing on the brakes what he gained on the straights, he was slowed still further by oil leaking into the cockpit and overheating caused by newspaper scattered by a gusty wind and collected by his radiator inlet. 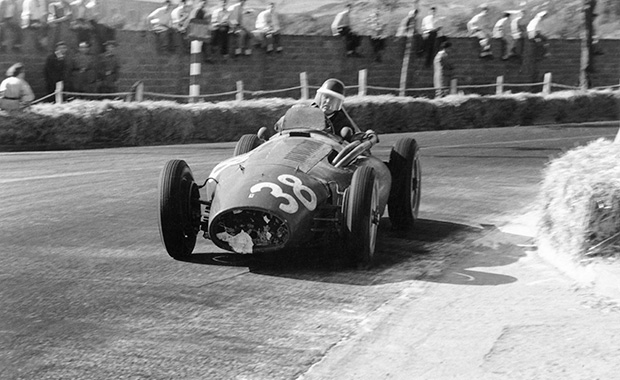 Grimly, he nursed his flawed genius of a car home to a lapped third place behind the victorious Hawthorn and the Maserati of Luigi Musso. Fangio rather than science had been the difference between Mercedes-Benz and the rest in 1954.

With the opening round of 1955, to be held in Fangio’s home country, just three months away, Mercedes-Benz faced another race against time. Its response was a shorter, lighter and more powerful W196 – plus the signing of Moss.

But for broken lock nuts in their valve gear in Monaco, it would have completed a GP clean sweep. Instead, Maurice Trintignant was able to sneak another against-the-odds win for a Ferrari by now in one of its regular slumps.

If the latest iteration of the Scuderia can avoid the latter while continuing to make the most of any hard-won improvement and strokes of good fortune, we can expect more tears (of joy) from Sebastian Vettel, ever-greater efforts from Mercedes-Benz – and…

… he does a good grumpy, Fernando Alonso Díaz.