The sympathetically reconstructed Spa-Francorchamps circuit is quick – Mark Webber’s fastest race lap of 2011 was set at 142.6mph – but it’s not as quick as its ‘daddy’ used to be.

There was a time when tracks – and I’m talking trees-and/or-houses road circuits, not banked ovals like Brooklands’ Outer Circuit, and not there-and-back blinds like Berlin’s AVUS – cared not a jot for safety nor health and instead blatantly vied to be the outright quickest.

The original Spa, you might be surprised to read, wasn’t really at the races in this respect. So it took drastic action. Back then ‘Eau Rouge’ was hardly white-knuckle. Two 90-degree lefts connected by a hairpin right, it was lumbered with a tardy nomenclature too: Virage de l’Ancienne Douanne. Ooh, feel the speed. It was sufficiently slow for Rudolf Caracciola, on his way to winning the 1935 Belgian Grand Prix for Mercedes-Benz, to smell a spectator’s wisping cigar smoke.

That changed in 1939 when a radically reprofiled road cut a lazier yet much faster ess down, across and up out of the valley. No more anciennes douannes, this was red-blooded: that’ll be the real Eau Rouge, thank you. Its ramping effect, however, was diluted by the rain that fatally caught out Dick Seaman on the opposite, return leg of the circuit: Hermann Lang, Mercedes-Benz W154 (with M163 engine), 101.4mph. 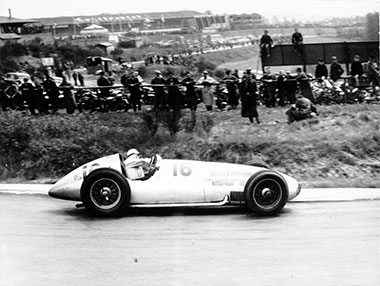 By 1950 and the inauguration of the (second) World Championship, Spa had undergone further surgery. Its tight right-hander on the outskirts of Stavelot town was by-passed with a new Stavelot – a sweeping, helpfully cambered right that opened invitingly at its exit. ‘Nino’ Farina thus uncorked an 115.1mph race lap in his Alfetta, faster than team-mate Juan Fangio’s subsequent season’s best at Reims in France (112.3mph) but slower than the Argentinian’s timesheet topper at Monza (117.5mph).

Reims’ rapid response was to undercut its photogenic but nadgery Gueux village section with a flat-maybe right of its own. This was linked by a new section of track to Muizon, a tight-ish right that usefully extended the subsequent hidden-dip fang along Route Nationale 31 towards Thillois. Merc rookie Hans Herrmann lapped this revised layout at 121.5mph in 1954, the first year of the 2.5-litre Formula 1 (Apologies to D.B., but I think we can overlook its 750cc-supercharged effort.)

Monza, suddenly lagging in the speed stakes, went several steps beyond in 1955 when it merged a new steepling oval with its long-established parkland blat: Stirling Moss, Mercedes-Benz W196 Stromlinienwagen, 134mph. 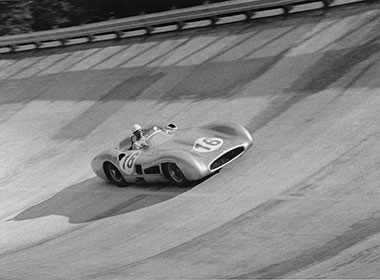 Trumped, Spa continued to smooth, ease, straighten and neaten, and had (un)comfortably topped 130mph by 1958.

Monza: 136.7mph – though no doubt this speed would have been higher still had not the British teams boycotted the Italian GP in protest of the unsubtle reinsertion of the oof-ow-ooer oval.

The 3-litre ‘Return to Power’ of 1966 marked Reims’ F1 hurrah, Lorenzo Bandini circulating at 141.4mph before having to jury-rig his Ferrari 312’s broken throttle with a stretch of wire snaffled from a fence. Team-mate ‘Lulu’ Scarfiotti’s fastest lap at Monza that year was ‘only’ 139.2mph. And it had rained at Spa, scattering the field hither and yon.

These speeds, though, were put into context in 1967 when Dan Gurney’s Eagle-Weslake clocked a 148.8mph race lap at an overcast but thankfully dry Spa. (Jim Clark’s Lotus 49-Cosworth DFV had cracked 150mph in practice.) It’s little wonder that wings sprouted here in 1968.

It couldn’t last, of course. Spa was given a chance to ‘redeem’ itself by a resurgent GPDA, but its extra Armco and unsatisfactory Malmédy chicane of 1970 could only ever be a stay of execution: Chris Amon, works March 701, 152mph. The 1971 Belgian GP was cancelled and Nivelles-Baulers – the 2.3 miles of anodyne anonymity that not long ago morphed into the trading estate that surely it was destined always to become – loomed. 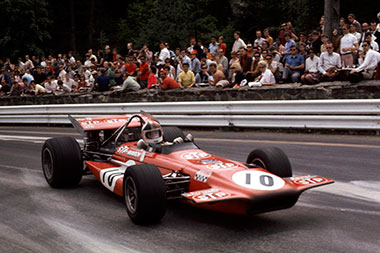 Forty years on, back-to-back grands prix at the still-majestic Spa and historic Monza will provide a much-anticipated kick-start to a championship that has been on hold for a month, while the subsequent dotting and capping of its extended denouement by Suzuka and Interlagos will carry me through the other, homogenised races, where, like as not, only the results will catch my eye.