Cast back your mind a few decades, to bygone Formula 1 launches. The weekly press would carry photographs of such events, specialised occasions whose attendance could be measured in tens rather than hundreds. The images reflected as much, with small groups of humanity clustered around new cars. The location was often Silverstone and the background would sometimes be laced with snow.

Back then, of course, the circuit’s pit complex was a single-tier structure, with cold, concrete bunkers doubling as garages. It was far removed from the contemporary Silverstone Wing, which divides opinion almost as spectacularly as it dominates the local landscape. It is still a pleasing throwback, though, that Force India chooses to unveil new cars in the Silverstone pit lane – the manor of old, if not quite the manner of old (coronation chicken sandwiches and vegetable soup would not have been available in 1977). 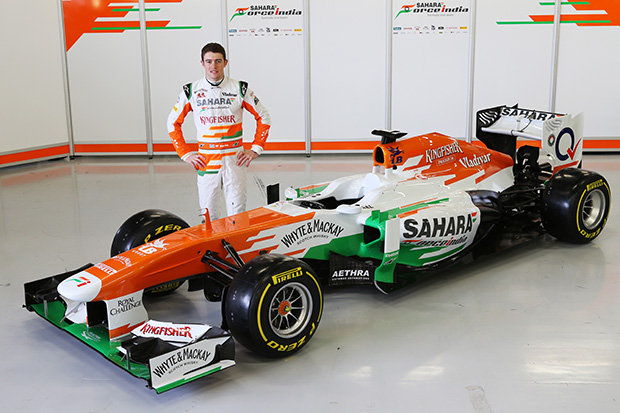 During the 1990s, F1 teams began moving away from their traditional habitat to unveil cars in theatres, with dancers, fire-eaters and pointlessly elaborate light shows thrown into the mix. In 1997, the Spice Girls turned up at Alexandra Palace to accompany the launch of the McLaren MP4-12: the central attraction lurked silently on a plinth, reduced to a sideshow in the eyes of the mainstream media. Of all the world’s sculptures, racing cars make the least suitable static exhibits.

The wheel has turned full circle, though, and nowadays teams tend to repair once again to racetracks. After the VJM06 had been unwrapped at Silverstone, Paul di Resta completed only the briefest of stints at the wheel. “It’s just a bit of a taste,” the Scot said, “before we run in anger at Jerez next week. It’s nice to see the finished product, though, after a few tantalising glimpses during the recent past. It will be my third season with Force India, so I’m another year wiser and have never felt more ready for the season ahead.”

There was no word on his future team-mate, although the rumour mill places Ferrari development driver Jules Bianchi on pole position. The 23-year-old Frenchman’s recruitment is said to be tied to a customer engine supply deal from 2014, but matters of such contractual delicacy breed only silence. Force India’s deputy team principal Bob Fernley wouldn’t be drawn, other than to mention that his line-up should be formalised by the time the second round of pre-season testing commences in Barcelona.

We didn’t learn a great deal, then, but it was nice to rewind the clock. Appropriately, it was also absolutely bloody freezing.