For the first time in many years, the Formula 1 rules are due to change very substantially in 2009, and Patrick Head recently talked about the problems implicit in developing, week in, week out, one car – the car actually competing at the moment – while attempting at the same time to work on its very different successor.

“Every team,” said Head, “knows that 2009 is an enormous challenge – the cars are going to be completely different. A big change may be welcome, but all the winglets and flip-ups and other aerodynamic bits and bobs will pretty much disappear. There’s more emphasis on mechanical grip, and less on aerodynamic.

“In many ways they should be better-looking cars than we’ve got now, because the profile will be so much cleaner. Mind you, having said that, the new front wing looks – to me – ridiculous. It’s a lot wider than the current front wing, and almost comes to the outer edge of the front tyres. On the face of it, it’s going to be pretty damn easy for drivers to knock the front wing off against other cars, but I suppose all you can say is that the drivers will just have to learn to deal with it…”

Williams has not yet completed a definitive 2009 car design, but one of its two wind tunnels is already largely engaged in the ’09 programme. Using one of last year’s FW29 cars, the team has have systematically stripped away all the aerodynamic ‘bits and bobs’, such as bargeboards, winglets and so on, and changed the diffuser and front wing to conform to the new regulations. “Steadily,” said Head, “the downforce dropped and dropped away. We’re not going to get back to this year’s level of downforce, but we’ll certainly get some of it back.”

All the teams are putting more resources into ‘next year’s car’ than would normally be the case, for it is not only a matter of new aero rules. For one thing, KERS, very much Max Mosley’s obsession of the moment, is mandatory in 2009; for another, after what will have been 11 seasons with grooved tyres, F1 cars will once more run on slicks.

As things stand, the slicks are due to be the same width as the current, grooved tyres, but in tests conducted so far the rears have not kept up with the fronts. “With the current tyres,” said Head, “there are four grooves in both fronts and rears, so ‘filling in’ those grooves necessarily increases the contact patch of the front tyre more than the rear. We’re due to test with a narrower front slick in a month or two – at the moment the front tyre is much stronger than the rear, and Bridgestone feel that a narrower front should balance things up better.

“It’s tricky. You know, the figures for the amount of TV exposure each team gets are available on the Monday morning after every Grand Prix, and if we’re on the screen for .73 per cent of the available air time or whatever, all of a sudden existing sponsors start saying, ‘We don’t want to be with you next year…’ And in this era it’s very difficult to attract new sponsorship.

“Obviously we aspire to be right at the top, but unless we can finish in the top six teams in the constructors’ championship, I don’t think it’s possible for us to generate the income we need. That being so, we can’t afford to say, ‘Oh, we’ll give up on 2008 to concentrate on ’09, and if that means we finish eighth this year, it doesn’t matter’. It does matter. So, one way and another, this year is an enormous challenge…” 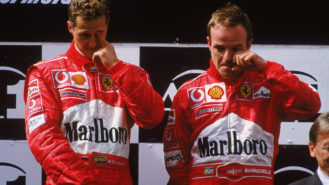