The second half of Simon Arron’s assessment of each Formula 1 team’s chances ahead of the Australian Grand Prix. Part one can be found here.

There are many who believe Sauber produced one of last season’s most effective chassis, a car that might have notched a few wins if the Swiss team had access to drivers of slightly finer pedigree. As it was, Sergio Pérez came within a damp kerb of winning in Malaysia. And now, in Nico Hülkenberg, it has a racer of immense promise… but nobody is sure how good the C32 will be following former technical director James Key’s transfer to Toro Rosso. It’s no surprise that Sauber plumped for Hülkenberg, only that a bigger team didn’t get there first. The underlying feeling, though, is that he’s here only while Ferrari keeps a seat warm. Esteban Gutiérrez looked terrific in both Formula BMW and GP3 – series in which he learned many a grand prix circuit – but a little less so in F3. More recently he has been brisk but erratic in GP2, although Sauber insiders feel he has greater long-term potential than the outgoing Pérez. That’s not a recent message, incidentally, but one the team imparted early last summer… In Melbourne there will be two Mexicans on a world championship F1 grid for the first time since 1968, when Pedro Rodríguez and Moisés Solana took the start in Mexico City. 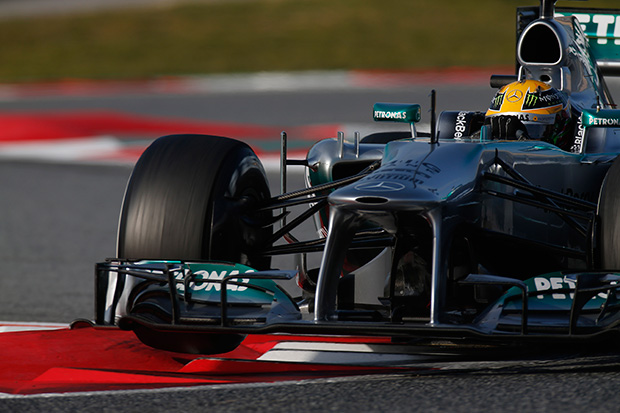 Has shown stellar one-lap pace during tests, but was that because the car represents a quantum leap over the W03? Or is it just that Mercedes was the only team capable of getting its tyres into an optimum operating range during wintry test conditions… and might thus shred them in the relative heat of Melbourne and oppressive certainty of Malaysia? Such are the details that render pre-season testing a fickle barometer. Mercedes has been collecting other teams’ technical directors like schoolboys collect stamps – Ross Brawn knows the role, while Bob Bell, Aldo Costa and Geoff Willis will one day be joined by Paddy Lowe – and there has been a management shuffle, with Niki Lauda (who doesn’t have a great record in this domain) stepping in as non-executive chairman and Toto Wolff moving across from Williams to replace Norbert Haug. There’s ample cerebral muscle, but can it be harnessed to conjure a car capable of sustaining Lewis Hamilton’s appetite for a scrap? Nico Rosberg, meanwhile, is about to embark upon his eighth F1 season but has still to convince the wider world how good he really is – or, possibly, isn’t. Against a benchmark such as Hamilton, the question should soon be answered one way or the other. Mercedes insiders claim Michael Schumacher was the team’s most consistently effective driving force from mid-2011 onwards…

The good news is that the core of a potent team remains intact – although it has lost aerodynamicist Mike Elliott, another swept up in a Mercedes recruitment drive that seems to involve signing everybody from almost everywhere. Romain Grosjean is devastatingly fast – and has been in everything he’s ever raced – but so far seems incapable of learning from his mistakes, despite his protestations to the contrary. For an object lesson in delicate racecraft, he needs but to look in the adjacent garage. Kimi Räikkönen last year earned rave reviews for the quality of his comeback campaign, but the foundation was consistency rather than startling speed. He might have won more than once had the team been more aggressive with race strategies – notably in Bahrain – and in such circumstances you’d expect Alonso, Vettel or Button to have directed tactics from the cockpit. You can’t really complain, though, about a driver who failed only once to score points (in China, where the team was a bit too ambitious with its tactics) and would have completed every competitive lap of the season had he not wandered off, mid-race, to explore the Porsche GT3 paddock in Brazil. It’s also to Lotus’s credit that it has moulded the Finn’s engagingly quirky personality into a useful marketing tool. In Malaysia last year, the media were all given free ice creams “courtesy” of Kimi. 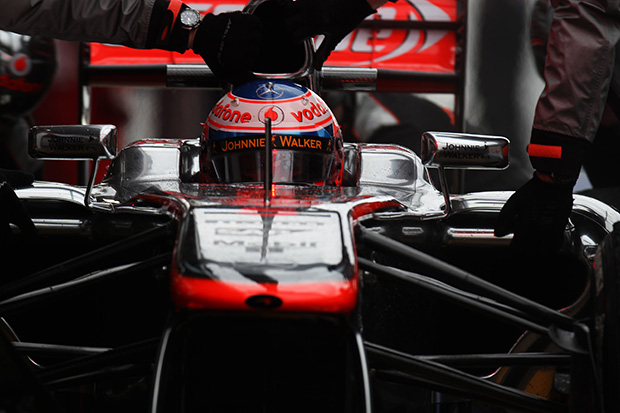 A few years ago, reigning champion McLaren was instrumental in persuading stakeholder Mercedes to supply engines to the cash-strapped Brawn team, which showed its gratitude by romping to a world title double. Since then, Brawn has morphed into Mercedes, which sold its McLaren shares, recently swiped Lewis Hamilton and will eventually recruit Woking’s highly rated former technical director Paddy Lowe. In return, McLaren has poached Jenson Button – a driver rarely given the credit he’s due. He wasn’t particularly consistent through parts of 2012, but his window of operation is narrower than the more adaptable Hamilton’s. When he gets the set-up where he wants it, though, he’s faster than almost anybody – Hamilton included. Incoming team-mate Sergio Pérez has driven some very good races during the past two seasons, although his former team boss Peter Sauber conceded that a brilliant run to second in Italy owed a little to fortune. If Pérez had done a better job in qualifying, he’d have been consigned to starting on Pirelli mediums – like the front-runners – and would not have been gifted the best tyre strategy. That said, he was one of very few to make the correct choice. And then, about five minutes after his McLaren deal was confirmed, his season fell apart. Despite its habit of building winning chassis (during the past 16 seasons, it has only once – in 2006 – failed to conjure at least one victory), it’s a bizarre statistic that McLaren has not been champion constructor since 1998.

This time last year the team was still wrestling with the scarlet equivalent of an Austin Cambridge, so it’s hardly surprising that the mood within the camp now seems a little brighter. There has been the customary volley of pre-season sound bites, Fernando Alonso claiming at one stage that Ferrari was in a “200 times better” state than it was at this juncture in 2012, when it was about 1.5s off the pace. We assume he didn’t mean the car was now five minutes per lap brisker. Both drivers, meanwhile, have said they’re not worried about the Red Bulls’ speed, which is hardly surprising as nobody – Red Bull included – is yet sure about the RB9’s true mettle. Alonso was consistently brilliant in 2012, the driver of the campaign in most eyes, and came within an ace of becoming the only Austin Cambridge driver to win the F1 title. Felipe Massa slept through the first 14 races, then awoke and did enough to preserve his job for an eighth consecutive season. It’s unclear which version of the Brazilian will turn up in Melbourne, but generally he’s an obedient lieutenant who is very good for team harmony, if less so in terms of winning the World Championship for Constructors. 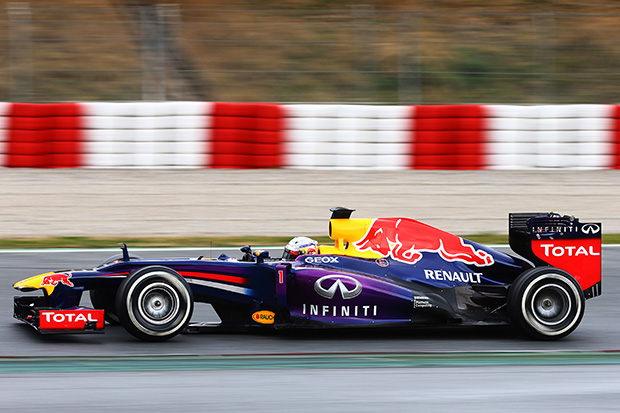 The defending world champion didn’t set many headline times during pre-season testing, but then it rarely does. The RB9 was launched in virtual twilight, either to hide Adrian Newey’s latest sculptural conceits from prying eyes or else to persuade rivals that there was something worthy of concealment, and few teams succeed in keeping their powder quite this dry. Its long-run test pace – the thing that most matters – looked reasonable, although Barcelona’s low ambient temperatures played havoc with tyre degradation patterns. And in any case, with Red Bull you can never be sure whether times were set with 30kg, 50kg or 70kg of fuel aboard. Even when the car isn’t immediately effective – last year, for instance – the team’s reactive capacity soon makes it so. And when it takes a major evolutionary step, its sense of timing is admirable. While others experimented with active double DRS (now banned) last season, Red Bull bolted it on in Singapore (which nobody noticed at the time) and won the next four races, albeit with help first time out from McLaren’s frailties. Success has made the team unpopular with rivals, but you can’t fault its methodology.