Each season we await the opening round of the Formula 1 World Championship with baited breath.

Some of us – despite the sport’s ever-improving reliability and spiraling exclusive budgets – hope against hope that it might conjure a surprise. For surely the first race of a season is the best opportunity for an outsider to make his mark, as the field dials into new chassis and strategies. Melbourne’s Albert Park should in a metaphorical sense be the year’s bumpiest playing field, an opportunity to peak early before each team finds its true level, with the you-know-whos you know where.

But is this thinking anything more than wishful?

There have been 62 Round 1s since 1950. Twenty-five drivers with a world title to their name have won 52 of them. That’s what the elite do best – hit the season winning. That, and not letting the rest catch up thereafter. Thirty-two of those 52 were secured in a season in which the winner was eventually crowned champion.

Better not to hold your breath, then. For F1 is not long on surprises. There are too many complex factors to be conquered for simple luck to be anything other than a fleeting factor in victory. That’s why only a handful do the winning in any era.

So, Round 1 is a race like any other – and more than likely a strong indicator of what’s to come that season. It tends to be won by a familiar face – usually driving a car made fast and reliable by an exclusive budget – who is already acquainted with the rostrum’s top step. Indeed, only six drivers have broken their duck in these races: Taruffi, Jack Brabham (1959), Graham Hill (1962), Rodríguez, Mario Andretti (1971) and Irvine.

Aha, but even those of us who have invested sufficient years in the sport to have watched hundreds of GPs that were not littered with overtakes – enjoying (nearly) all of them – and are thus inured to the blandishments of hype, know never to say never. Surprising things have happened at the first time of asking and will continue to do so – by my very rough reckoning (see below) – each and every decade. 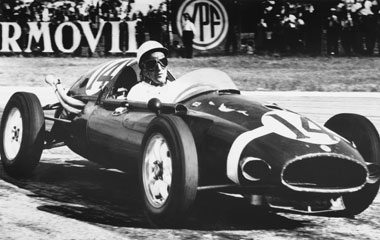 Stirling Moss stood the sport on its head with his cheeky rear-engined Cooper. He drove it because Vanwall was not yet ready for the new regulations. Having qualified the 1.96-litre machine seventh, he planned to run non-stop because it was light on tyres and fuel. The ‘establishment’ didn’t cotton on to this until it was too late, and Moss won by 2.7 seconds despite his Continentals being worn down to their canvas. 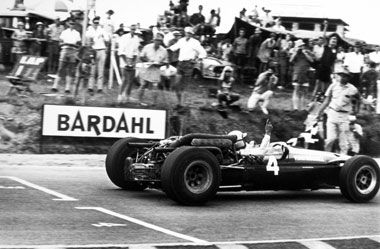 Mexico’s Pedro Rodríguez had wowed pundits since his emergence as a teenage tyro. However, at the age of 26 this was only his 10th GP. Given a try-out in an old car by Cooper, he qualified fourth, ahead of team leader Jochen Rindt, and raced aggressively and impressively in the early laps before being forced by transmission trouble to show another side to his talent: steely determination, which paid off as those ahead dropped out one by one. 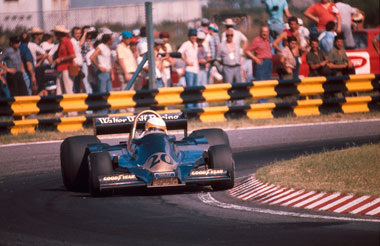 The brand new, one-car Wolf team suffered teething problems during practice – intermittent fuel feed, loose bodywork, a down-on-power DFV – and Jody Scheckter was resigned to a broiling race cloaked in the pack. Yet his car ran perfectly as others stuttered and he inherited the lead with six laps to go when Brabham’s Carlos Pace began to suffer heat exhaustion. 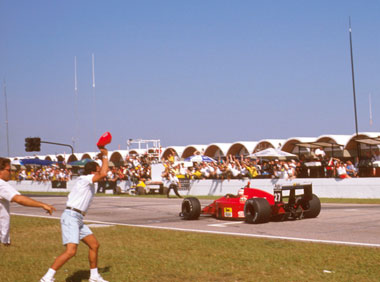 Nigel Mansell did well to qualify sixth given that his Ferrari’s ground-breaking semi-auto gearbox halted him in three of the four practice sessions. It had been the same in winter testing, and so his dispirited team booked early return flights. Yet the Brit took the lead on lap 16 and his car never missed a beat – although its steering wheel did come loose briefly – and he accepted the chequer after 61 laps. This was the furthest distance – 191 miles – that this Ferrari had covered without a problem. 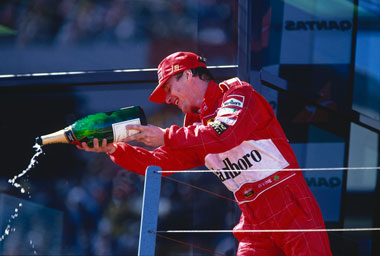 There has been few clearer – and seemingly content – number twos than Ferrari’s Eddie Irvine. But when Michael Schumacher, hampered by the slow-starting McLaren of Mika Häkkinen (on pole), stalled on the formation lap, the Ulsterman stepped up. The McLarens had dominated qualifying – faster by more than a second – and breezed away in the race, only to suffer transmission (Coulthard) and throttle snafus. Thus promoted, ‘Swerve’ held a steady course to prevail by a second. 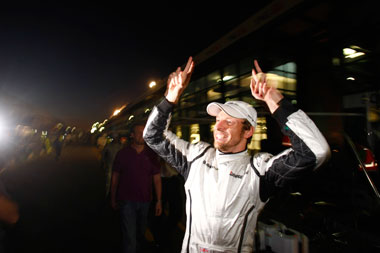 Winter testing pointed to it: the team that had almost gone bust just weeks before had stolen an aerodynamic march over its opposition. But it seemed too amazing to be true. Irrefutable proof was required – and was provided by Jenson Button, who smoothly steered his unsponsored, doubly diffused Brawn GP to pole position and a victory.

Whether we have to wait until this weekend or March 2019 for the next gladdening upset is fine by me. That this fast-moving sport has a counter-rhythm – tectonic shifts of supremacy: driver, car, team – is what gives depth to its razzle-dazzling colour.

In the meantime, my pick for Albert Park – and the world title – is: Sebastian Vettel.