It’s finally race week once again after almost 100 days since the drama of the 2021 finale and Formula 1 will begin a new season in Bahrain.

Redesigned cars may shake up the order as teams race to find set-up sweet spots and ultimate performance versus rivals.

It means this weekend’s Bahrain Grand Prix could throw up a surprise result or two with plenty of issues from testing still to sort out up and down the pit lane.

Following six days of testing, Ferrari appears to be back to its fighting best while Red Bull is looking equally strong heading into round one.

Reigning champions Mercedes downplayed its chances after struggling with porpoising (more on that later), though we’ve been down this road a few too many times in the past to discount them.

Another conclusion from testing is that the entire field looks to have closed up from front to back meaning that every tenth of a second will count, and drivers should be making more of a difference this year.

With that said, here are a few items to keep an eye on as the first race of the new Formula 1 era begins. 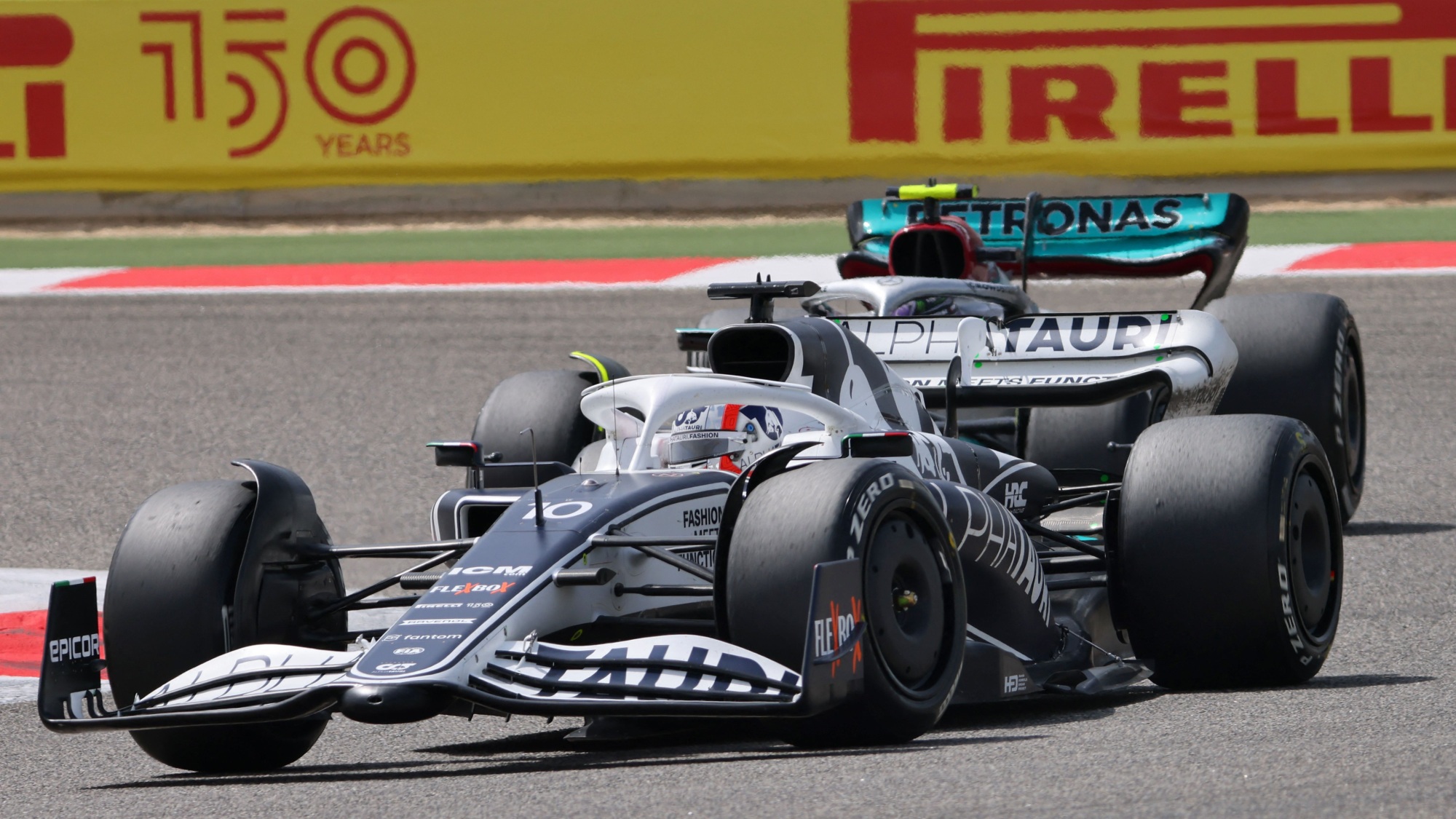 One major talking point during the second test in Bahrain was the relative ease in which drivers could follow one another in the turbulent wake of the car ahead.

Pierre Gasly and Lewis Hamilton had an almost 10-lap scrap on track with each remaining comfortably within a one second window around the entirety of the Sakhir International Circuit, boding well for race day this weekend.

“Following other cars is clearly better than last year”

The 2022 cars have been designed with better racing in mind and the rear of the cars send the turbulent air much higher than in seasons past. It appears to have had the desired effect, at least on the current viewing so far.

“I was quite surprised to be fighting with Lewis for a couple of laps, it was entertaining,” Gasly said after stepping out of the car on day three.

“It was interesting also to follow and just to get some data and feeling following other cars. I think it’s clearly better than last year, which makes me quite optimistic.

“In terms of racing, it was clearly an interesting few laps – quite fun battles, I think it should make all the races quite exciting for you guys this season.” 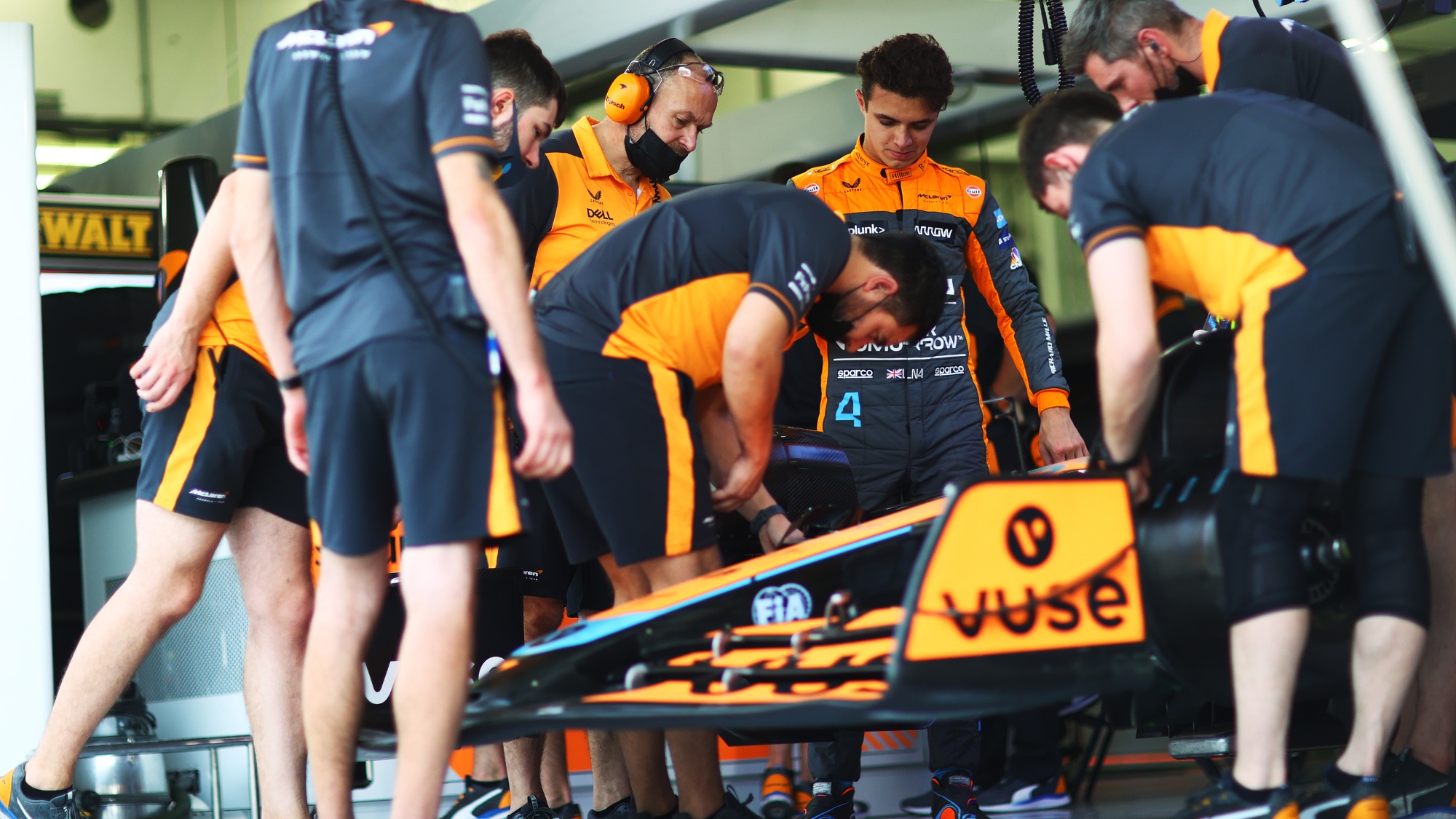 Two teams that struggled during pre-season testing were McLaren and Alpine. Both suffered from technical issues and were difficult to place in a projected competitive order.

While McLaren suffered overheating issues on its front brake assembly, Alpine was hit with two stoppages on days one and two, limiting mileage though it compensated and recovered well on the final day of running.

When Lando Norris was on track, the McLaren looked like a promising package though the limitations stemming from the brake issues were not resolved by the end of the test. The team had a fix on the way from its base but they never arrived in time.

“We continue to understand the car after a mixed pre-season test and the team are working hard to address the issue we encountered, in preparation for the first race,” team principal Andreas Seidl said ahead of the weekend.

Over at Alpine and the team is confident it has addressed all of its issues faced during testing and Fernando Alonso’s flying effort on the final evening to put the team in the top five was a promising sign.

“We’ve learnt a lot with the car and completed many laps, so I’m pretty happy,” Alonso said after the final day.

“We are all still learning about the new cars and set-ups. We’ve tried several things with some clear results. It was very productive. We don’t know what the others are doing, what programme they are following and how much fuel they have, and we need to wait until next Saturday to know.”

Will the team have made the step forward to fight at the top or is another season fighting in the midfield on the cards? 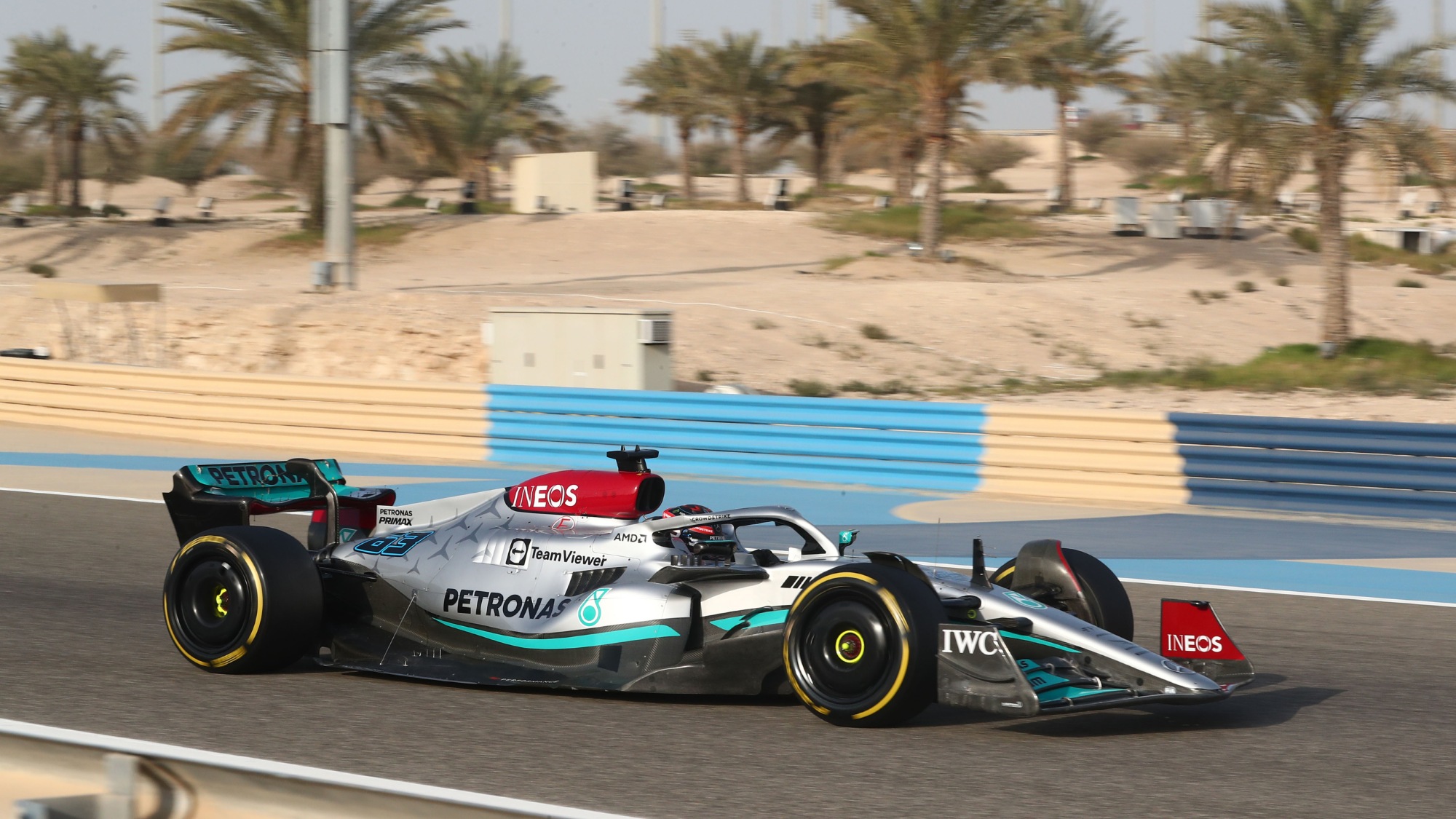 Mercedes was one of the worst cars for porpoising in Bahrain

There was a sense of pessimism from the Mercedes camp as pre-season testing came to a close last week.

Both Lewis Hamilton and George Russell suggested that the team was not on the leading pace, and could be as much as half-a-second behind Red Bull and Ferrari during the Bahrain GP weekend.

“We’re not the quickest. Ferrari look to be quickest then Red Bull then maybe us, maybe McLaren but we’re not currently at the top,” Hamilton said on the final day in Sakhir. 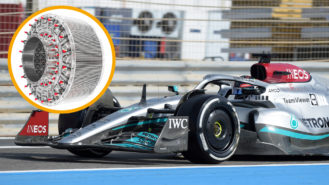 Mercedes certainly caused something of a stir in Bahrain with a radical take on the sidepod design of its W13. Sidepods are one of the most visually differing areas of…

“It’s not as good as last year. I think we have far bigger challenges this time and they’re not one week turn around, I think that would take a little bit longer. But from what I’m told, we have a considerable amount of pace to find.”

Of all the issues facing the team, the porpoising phenomenon might be the biggest hurdle to overcome. The severe bouncing the car suffered from on all three days didn’t appear to be solved by the end of the tests. In fact, Mercedes looked to be one of the teams most affected by the issue.

“At the moment for us, that’s one of our weaknesses, but I’ve seen other people also experiencing it and that’s not great. [It’s] definitely a hindrance at the moment,” Hamilton added after stepping out of the car.

“I hope somehow we’re able to fix these things so we can realise the true potential of these cars.”

Is it the usual downplaying of expectations from Mercedes or might the juggernaut be about to fall away in F1’s new era?

Ferrari vs Red Bull (and Mercedes?) 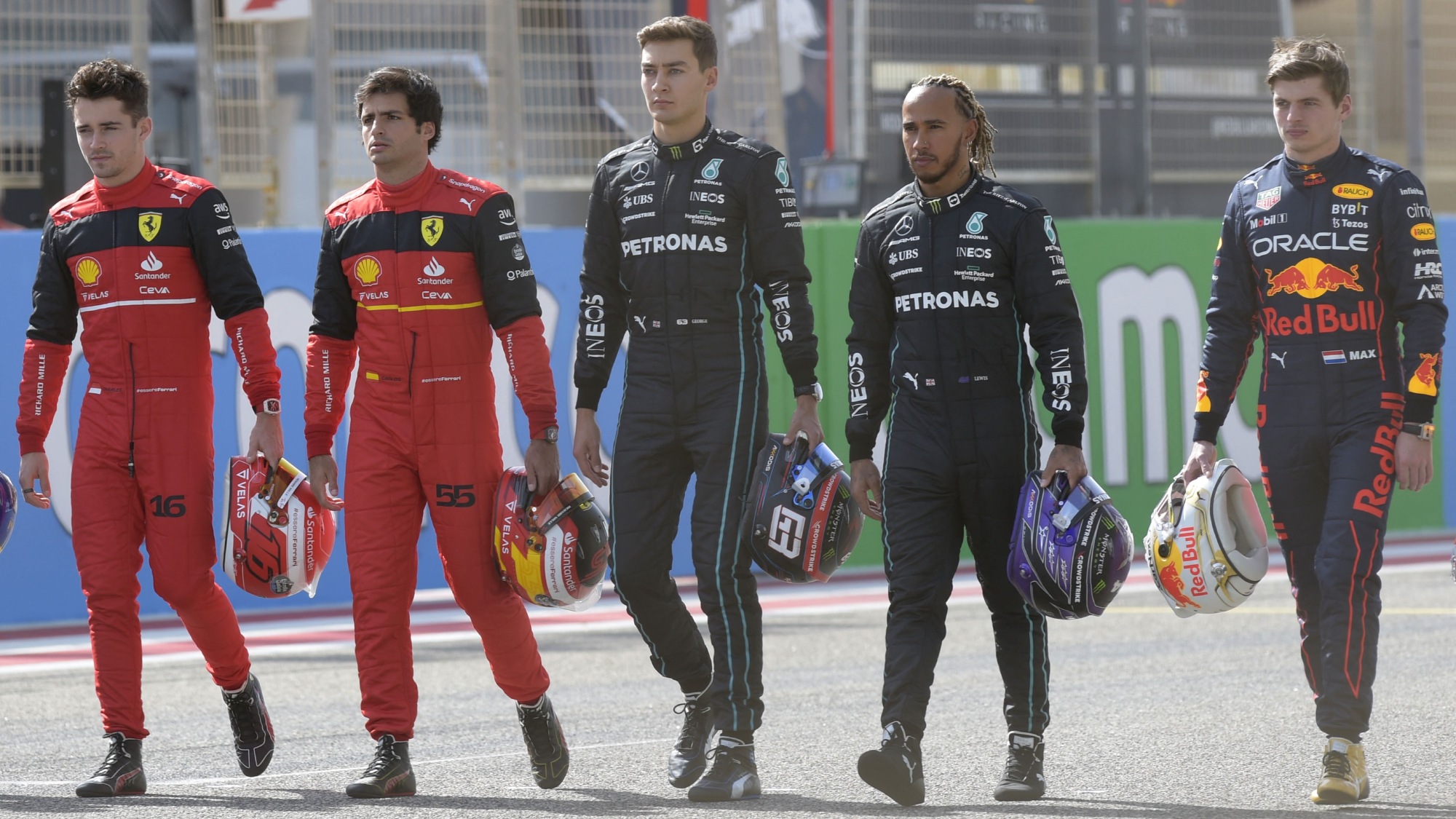 While Mercedes was keen to minimise expectations ahead of the opening race it was laying the favourite tag firmly at the door of Ferrari.

Likewise, Red Bull was in line to heap praise upon the team in red after it appeared to have the smoothest pre-season of the top teams in Bahrain.

Team principal Mattia Binotto tempered his appraisal of the competitive order but hardly dispelled the notion that Ferrari was back fighting fit and ready to challenge for wins from the outset.

Likewise, Charles Leclerc said that 2022 had been the best pre-season he’d had since arriving at the team. 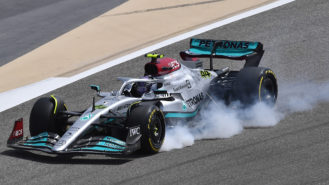 'I hope we get better tyres': drivers criticise grip of F1's new 18in Pirelli rubber

Pirelli’s new 18in tyres have come in for criticism on the final day of testing in Bahrain, with Lewis Hamilton criticising their grip level. “I hope we can maybe get…

“It’s definitely one of the smoothest preparations I’ve had [before] a season,” he explained on the final day of testing. “No major issues and especially on such a new project you always expect to find some barriers on the way, and for now, apart from porpoising that is still an issue in some conditions, it’s been quite smooth and we’ve managed to just keep improving.”

Red Bull brought updates on the final day of testing and those appear to have worked as hoped for the team. Sergio Perez went fastest in the morning and Max Verstappen followed suit in the afternoon, posting the fastest time of the entire three-day test.

The updated sidepod and floor of the RB18 look to have brought pace to the car and Verstappen made sure to underline he hadn’t stretched the limits just yet.

“Nobody is [at] full beans at the moment,” he said after the test was over.  “I think with the new parts also worked well, which you always hope for. They worked, so then hopefully we’ll keep them on [for the opening race].”

So where does that leave Mercedes?

After his duel with Hamilton on track, Gasly had an interesting take on the state of play at the top of F1’s food chain.

“I was kind of surprised to battle with Lewis. I think the conclusion is Mercedes probably doesn’t look as good as they were in the past.”

All the cards will be laid down on Saturday night.