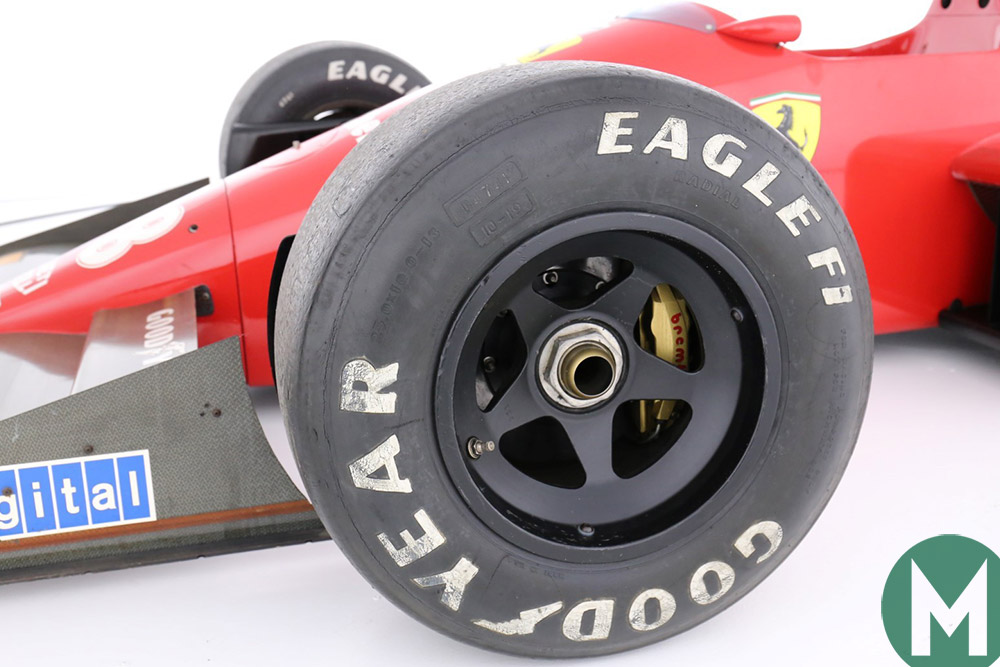 The Ferrari F1/87 driven by Michele Alboreto at the 1987 Hungarian, Austrian and Italian Grands Prix is set to be auctioned by Bonhams in Monte Carlo on May 11. Albeit, this one sports Berger’s no28.

While it never claimed victory, it does hold the unique honour of being the 100th Grand Prix chassis built by Ferrari since it began numbering in 1961.

Alboreto was partnered with Gerhard Berger for 1987, with the Austrian winning the Japanese and Australian Grands Prix and three poles that season. Alboreto, meanwhile, briefly led the San Marino GP but for a turbo issue to drop him to a third-place finish.

Chassis 100 made its debut at the Hungarian round, the ninth race of the season, with Alboreto qualifying fifth in the wet, spinning, and retiring on lap 43 due to engine problems. The following Austrian GP, which was restarted three times, wasn’t much better as a broken exhaust caused him to retire 10 laps before the end, and at Monza he was sidelined early on by a turbo failure. In Portugal, a transmission failure cut Alboreto’s race short.

It was only in the final two rounds of the season when the F1/87 found its true pace, as Berger won both and Alboreto completed a one-two for Ferrari in Adelaide following Ayrton Senna’s disqualification. The late surge helped Ferrari secure fourth in the constructors’ championship.

Since then, it has spent several years in climate-controlled storage but is no longer in running order. Underneath its engine cover is a Tipo 033 V6 engine that produced 950bhp in qualifying and around 880bhp in race tune through a six-speed manual transmission.

The car was designed by Gustav Brunner, who moved to Ferrari as John Barnard took over as technical director from McLaren. Barnard said that he would rather have worked on the car from the ground up, rather than joining a year after work had begun on it.

Yet the 87 was still an important machine for the Scuderia as it shook off the mid-‘80s slump that Ferrari found itself in. However, Ferrari’s next effort, the 87/88C, didn’t fare much better.