Reliving the closest (genuine) finish in Formula 1 history, at Monza in 1971

It’s hardly been better, rarely been faster; certainly never closer. Monza had a habit of producing slipstreaming classics, but its zenith was 1971.

Four cars crossed the line in less than a blink. Peter Gethin, the son of racehorse trainer, won by a nose for BRM, audaciously punching the air as he passed the flag man, who looked remarkably uninterested.

Ronnie Peterson, François Cevert and Surtees’ fresh recruit Mike Hailwood missed out by less than two tenths. Howden Ganley was six tenths back, a mile off in comparative terms. None had ever been closer to a Grand Prix victory, something that would remain elusive for Hailwood and Ganley.

Polesitter Chris Amon slipped into the pack with a bad start, the jump-starting Clay Regazzoni making it look even worse. The luckless Kiwi’s race soon deteriorated further, blistering tyres and fuel starvation leaving him adrift. That soon applied equally to his visor, Amon getting more than he bargained for when he ripped at a tear-off. “A bit disappointing, all in all,” he told Nigel Roebuck.

Jackie Oliver, who had relieved Gethin of his McLaren seat just a few weeks beforehand, faded to seventh. Jackie Stewart and Jacky Ickx’s engines had given up early on, Siffert’s BRM – victorious three weeks prior – jammed in fourth gear.

For Gethin it was all or nothing. “From the start of the race I just revved that V12 engine 500 rpm over its normal limit all the time,” he told Alan Henry in 1983. “I can honestly admit that I didn’t think it would last to the finish. Jo Siffert had a more powerful development engine in his BRM and that extra power broke his transmission, so I wasn’t optimistic.”

Engine aside, it didn’t all go to plan. The peloton at the front dragged away from any stragglers, with no chicanes disrupting the long slipstreaming straights.

“I got separated from the leading bunch as we were passing a slower car,” Gethin continued. “At one point I dropped about eight seconds back. But I chiselled away, gaining the odd tenth here and there, wondering to myself at what point I would pick up the slipstream of that half dozen or so cars at the front of the field. To my absolute amazement, the slipstream began working from four seconds back, and down that long Monza back straight I just hauled up onto their tails in a single lap!”

It was a race of 25 lead changes, the final one as late as the very last corner, Peterson entering it ahead of Cevert, followed by Gethin and Hailwood.

Gethin: “On the final lap I dived up the inside at Parabolica. The car started to slide and I piled on the opposite lock, telling myself ‘don’t lift, don’t lift’ and I came out of the corner first. I knew as long as I didn’t fumble a gearchange I could get to the line first, but Ronnie was surging up on me and passed me 20 feet after the flag. I knew it was going to be really close, so I waved my arm in triumph, not because I was showing off, but I reckoned that as this was Italy and they might not be too clever on their timing, the chances were that they’d give the win to whichever driver raised his arm!” 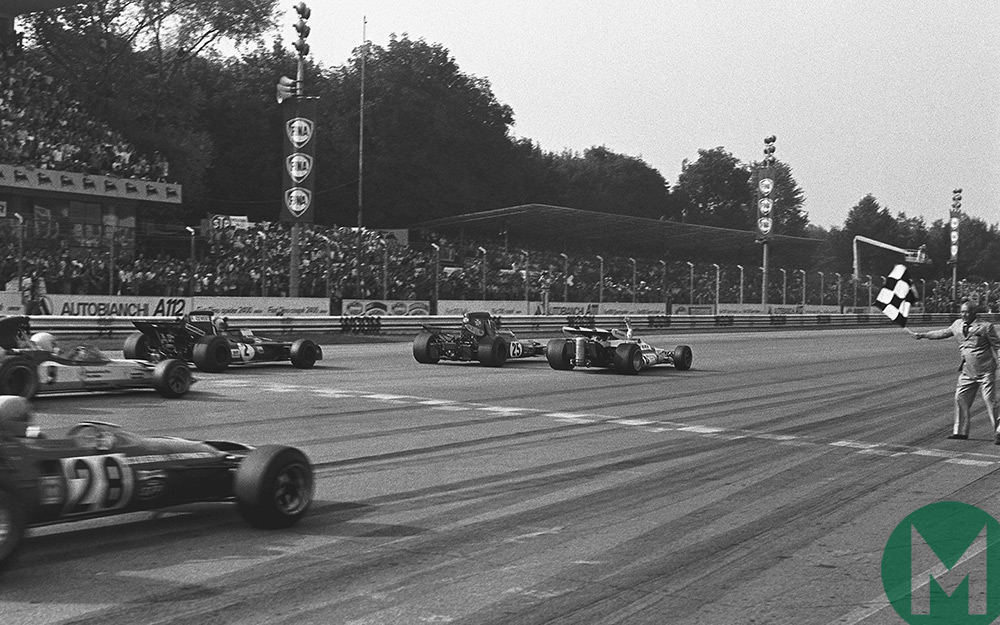 Cevert wasn’t impressed. He and Peterson both had plans – though neither accounted for the flying BRM. The Frenchman’s game was guile, the Swede’s ambush, as Denis Jenkinson explained: “During the closing laps Peterson’s March split an exhaust pipe and he told how he was 300 rpm down on maximum. However, he explained that he was able to stay with Cevert by braking harder and later (the Frenchman asked why he was not braking at the maximum before the exhaust pipe split). He had it worked out that he could pass Cevert’s Tyrrell between the last corner and the finish if necessary, as he had tried it a number of times during the last 15 or more laps.

Cevert counteracted by saying that he had a much more powerful engine than Peterson and could pass the March any time he wanted to, but did not intend to show Peterson this until the final sprint (and I thought they were racing “Harry Flatters”!). Cevert’s plan was to lead down the back straight, let Peterson lead into the last corner and pass him on the run-in to the finish by reason of his superior engine. He did not want to lead at the last corner in case Peterson got in his slipstream and “jumped” him at the line.

At this point Peterson asked Cevert why he braked so late into the last corner, because it forced the Swede to brake even later and go sliding wide. Cevert insisted that he had not braked late, and in fact had braked early to lure Peterson. Seeing the March in a full-lock slide on the outside of the last bend, Cevert decided to pass on the inside but at that moment saw his right-hand mirror full of BRM with Gethin really standing on the brakes and also heading for the inside. Thinking he would get a run into the straight he moved to the left, nearly collecting Hailwood’s Surtees in the process, and Gethin nipped through to lead the sprint to the finish. Normally he used third gear on the BRM for this corner, revving to 11,500rpm, and fourth up the finishing straight. This time he used his very high second gear, which got him out of the corner quicker and helped him to hold the others off in the acceleration match.

After all the explanations by the Frenchman and the Swede, I suggested to Gethin that he had been a bit unruly on the last corner. He grinned and said: “They left the door open and there was room for my BRM so I went through.”

Then he added: “It was a bit tight, but isn’t that what racing is all about?”