Us Brits are all fired up about the circus coming to town, to our patch, our home turf. And let’s face it, after weeks of rain (it’s supposed to be summer here) our turf is going to be at its greenest. Well, OK, it may be mud by the time 120,000 of us have been in and out of Silverstone. But, hey, who cares?

In my column in this month’s Motor Sport I allowed myself the tiniest of whinges about aspects of the new circuit layout. This in no way detracts from the sheer joy and excitement of immersing ourselves in the British Grand Prix at the home of British motor racing. If it’s a little emotional and very full-on, then imagine what it must be like for Messrs Button, Hamilton and di Resta who will be expected to deliver in front of us, the home fans. 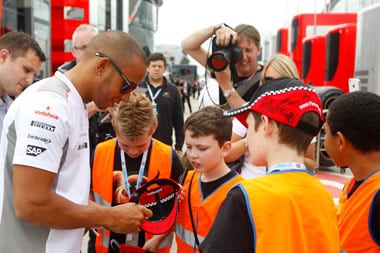 There is absolutely no point in going on about the old days, the way it used to be, the old Woodcote Corner, the old this, that and the other. That was then. Now is now. Things change, they have to. Ask the British Racing Drivers Club who own the place. If we wanted to keep our own Grand Prix, then we had to toe the line, build new buildings for Bernie and lay more asphalt for the commercial businesses that will hopefully sustain the ‘new’ Silverstone. You don’t have to like it, but what do you want? Another race in the back end of nowhere a whole time zone away from home?

I do not go to Silverstone thinking ‘Oh dear, let’s go back to how it used to be’. That is simply pointless and would probably spoil your day. No, I do not much like riding on a bus every time I want to go to the pits or paddock, but then I’m usually there to work, and some work has to be done. I can always walk out to Maggotts or Becketts, both still great corners, or I can stand at Copse and just marvel at how a 2012 Grand Prix car changes direction, how it sticks to the road at seemingly impossible speeds. Then there’s the noise; I love the noise. It stays in my ears for much of the journey home. It’s fun too, to chat to the fans, to compare notes, to see who’s doing what and who we reckon has got it all set up right for this demanding circuit.

Alright, it may be more difficult to get around, the traffic jams can be frustrating, but this is the British Grand Prix. We don’t expect to be sharing it with just a few mates. I might be at home for the race itself, if I’ve been asked to do any kind of reporting, because to watch on TV at home is pretty much the same as watching on a TV in the Media Centre where you can’t actually feel much of the bristling atmosphere anyway.

It will probably rain this weekend which will serve to make predictions even more difficult. Or maybe we will have three dry days in a row for the first time in heaven knows how long. But it matters not. The very best sport is the most unpredictable, the most surprising, and thereby the most dramatic. Ask Nadal about Wimbledon 2012, or the German football team at Euro 2012. Of course, us Brits would like see ‘Our Jens’ or ‘Our Lewis’ win on the day (Paul di Resta doesn’t have the car to do it) but many of us will be pleased to see Alonso at the front because he is just so good at what he does, or Vettel because he is so mind-blowingly quick when the car is perfect for him. We are there for the blast, for the annual visit of The Greats, and that’s why we’ve always been there. So, please, let’s not have any more whinging about the new, or longing for the old. Let’s just enjoy the British Grand Prix in all its glory, complexity, noise and colour. Rain or shine.