Lewis Hamilton has described the decision to press ahead with this weekend’s Australian Grand Prix as “shocking”, as more Formula 1 team members have been tested for coronavirus.

The six-time world champion had posted a picture of himself flying to the race in a face mask earlier this week. He said: “I am very, very surprised we are here,” in a Thursday press conference at the Melbourne circuit.

“It’s great we have races but it’s shocking we are sitting in this room.” 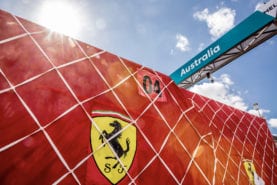 MPH: Is F1 irresponsible to race amid coronavirus outbreak?

Grand Prix racing could have been designed to spread a virus worldwide, says Mark Hughes. So should Formula 1 postpone more races until coronavirus subsides?

Hamilton contrasted the decision to press on and race with news that America has banned travellers from 26 European countries, and the suspension of the NBA season.

“So many fans here already today and it seems like the rest of the world is reacting, probably a little bit late,” he said.

“But we are seeing Trump shutting down the borders, the NBA has been suspended, yet F1 continues to go on.”

Hamilton was asked why he thought the race was going ahead as usual and replied: “Cash is king…. honestly, I don’t know.”

The Mercedes driver raised concerns over the health of older members of the paddock — including Sir Jackie Stewart — saying: “I just urge everyone to be as careful as you can be. Touching doors — I hope everyone has hand sanitiser.

“I saw all the fans going on like it was a normal day but I don’t think it is. I really hope we go through the weekend and don’t see any fatalities.”

Thursday brought news that two more Haas team members were being tested for coronavirus, in addition to three others — two from Haas and one from McLaren — who are already in self-quarantine.

However, Hamilton said that the results would not be known until after the race was over. “I heard the result is not going to come back for five days — coincidentally.”

Hamilton’s stance was backed by Sebastian Vettel, who said: “A lot of sport competitions, big events get postponed and cancelled. Like Lewis said, it’s fair to question why you’re here.

“Obviously, we have to trust the FIA and to take precautions as much as they can. But the answer that nobody can give you at the moment is how much you can control what’s going on. We are here so I think you just try to take care as much as you can.”

The Ferrari driver said that drivers would refuse to race if the situation worsened, with numerous coronavirus cases in the paddock, or even a death. “My stand would be hope it doesn’t get that far,” said Vettel. “If it were to get that far, then for sure you’d pull the handbrake.”