Like all the best awards ceremonies I’ll air my runner-up highlight first: fighting off the BBC to get time with David Coulthard.

We knew things would be tight when we arranged to photograph and interview David Coulthard driving Jim Clark’s Lotus 25 during press day for Silverstone Classic. A track full of cars, pits full of people, and a BBC crew trying to film the same story as us at the same time – and only 30 minutes of track time during lunch. That precious half-hour ticked away as the Beeb repeated its shots on and off track and got in the way of our DC portraits in the pits, both parties waging an unspoken struggle over man and car and to hell with the opposition…

Snapper Matt Howell finally had only a couple of laps on track with the famous Lotus, during which he almost fell out of the tracking car’s open boot. Squashed by DC – a dramatic end… But he got some terrific track shots plus an eye-catching cover, we snatched DC away and achieved a set of beautiful portraits, and I finally got DC alone and found he was no media darling but a proper car guy who’d been reading up on the history of the car he was here to drive. In fact, two days later in the office I couldn’t get at my desk because DC was sitting on it nattering about DTM after recording a podcast for us.

Extracting that story from such unpromising bones was highly satisfying, but the big thrill of the year for me was a simpler one – going for a ride in an old car. That might be under-selling it: this particular old car was the Rob Walker Short Wheelbase Ferrari 250GT which Stirling Moss stoked to victory in the 1961 TT at Goodwood. And we took it for a drive in the country.

It was a long-standing date: I met the car and its owner a couple of years ago when I did a feature involving Jaguar designer Ian Callum driving the SWB and a semi-Lightweight E around Callum’s favourite roads – around Lochinver in the far north-west of Scotland. As always that shoot was a rush and I didn’t expect to have a ride myself (although owner Clive Beecham, not then knowing I’m a wheelchair user, had originally proposed that the two of us drive the SWB from London to Scotland. Of all the opportunities I’ve not been able to take up since my injury, that stands about top). 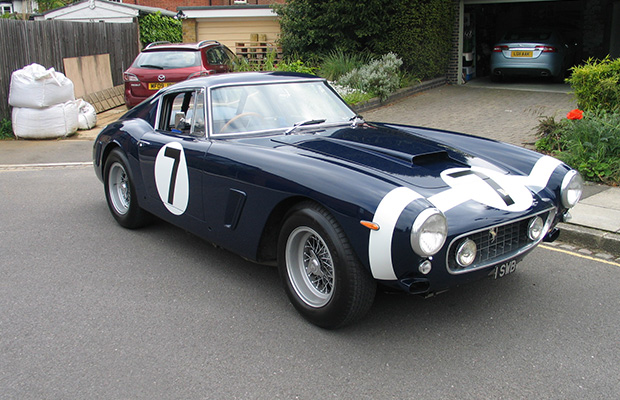 But Clive liked the resulting story and promised me a lunch trip in the famous blue Ferrari. Although this is one of the most important sports-racing cars on the planet, Clive isn’t precious about it: it’s still a car, and it was made to be driven. This summer the stars came together and suddenly the famous blue Ferrari was standing outside my house and I was wriggling into it. This always was a competizione version, with sparse black crackle-painted dash, basic dials, plexiglass windows and skimpy cord-covered seats, and it leapt into life with a spine-tingling jangle of chains and cams.

Being the south of England empty roads were hard to find, but even in traffic the car behaved itself, while I revelled in the sounds of gulping carbs and surging revs as Clive exercised the thoroughbred V12. We lunched at a very suitable spot – the William Bray in Shere, Surrey, run by ex-Tyrrell F1 driver Julian Bailey who appeared the moment our snarling machine nosed into the car park, and the car talk flowed through the meal.

But if lunch was enjoyable, the ride afterwards was blissful. Finally finding some road space, Clive gave the car its head over the North Downs, snapping through the gears as the car fidgeted on its Dunlop racers, feeling at all times securely planted but instantly responsive to throttle and wheel, the glorious noise echoing back from buildings as we passed. 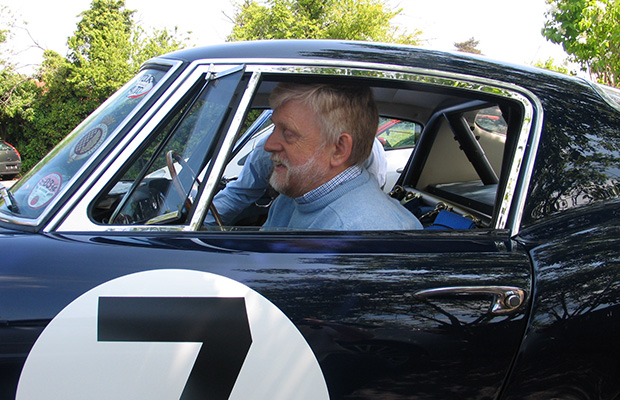 In an era of zealous traffic strangulation and safety cameras which have robbed driving of much of its pleasure and made overtaking a forgotten art, it was a genuine thrill to gaze through that shallow screen over the gleaming blue bonnet scoop and white competition roundel and watch the ribbon of road reeling rapidly beneath us amid the scents of hot oil and rubber. Made me realise how dulled the sensibilities become driving in and out of London, and it rekindled the sheer joy of a race-bred machine in full voice.

On the dash in front of me was a personal inscription: “The best GT car in the world – Stirling Moss”. I don’t need to add anything to that.