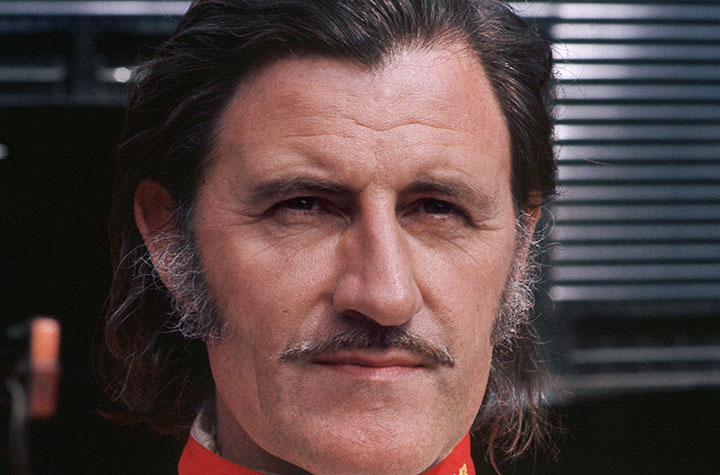 Graham Hill would have been 86 this week.

His death 40 years ago robbed a family of a fun and loving father and husband, and British motor sport of its greatest ambassador.

(Sir) Graham – a knighthood was surely in the bag – had not long embarked on the next stage of his adventure, as a Formula 1 team owner, when his private aeroplane clipped trees shrouded by a November fog. 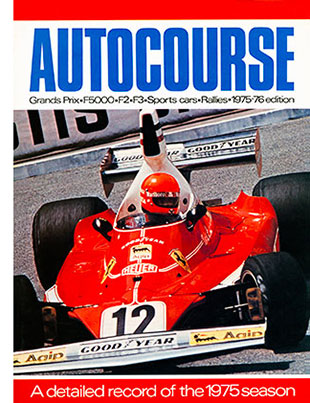 I recall seeing the Dante-esque scene – swirling mist, smoking wreckage, flashing lights – on TV, but its implication didn’t sink in until I received Autocourse 1975-76 as a Christmas present.

The annual was printed and awaiting despatch when news of the accident broke. So there is no obituary. Instead it carries a tribute to Hill by Jackie Stewart, the upbeat, lighthearted tone of which seems entirely appropriate for a life lived so fully – and in hindsight possesses a melancholy that no amount of gravitas could have evoked.

“So ‘Grandad’ finally retired!” is its opening line. It continues: “Let me say at the outset that the Stewart family are all very happy with his decision… When finally he did announce his retirement as a driver at Silverstone, it was a great relief for many people.”

Hill’s 1965-’66 BRM Grand Prix team-mate proceeds to refer to their Tasman Series fun-in-the-sun – water-skiing and flying lessons, with some racing thrown in – and their banter to relieve the boredom of sharing the overheating, underwhelming Rover-BRM gas-turbine at Le Mans.

But there’s a depth, too. It’s a telling sketch of an intense yet inspiring perfectionist prone to grumpiness and blessed with a winning and witty public persona: “Today he is a jovial, open and considerably less intense man than the pretty severe and sometimes unapproachable character of some years ago [1964]. He was never one to turn away from giving advice, but I never felt too sure about when to ask. 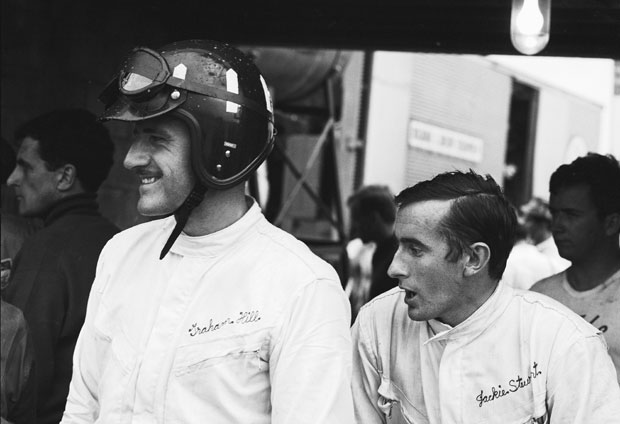 JYS and Graham Hill at Sebring in March 1966

“I needed guidance [in 1965] and there was no one better to study under than Graham. Many other drivers faced by a new boy coming in to the team and becoming competitive could easily have reacted in a negative fashion. At no time did Graham ever hold back information or help. For this I will always be grateful.

“I won my first Grand Prix [after a fierce internecine battle at Monza] and Graham was one of the first to congratulate me. A lesser man would have pulled rank and made a hell of a scene.

“He was [in 1968] the right man to win the title. It takes much more than driving to be world champion. One has to project to the public, speak on many occasions, and generally promote the sport as its leader. Even if I had won the title, I could not have done the sport justice. It was just too early in my career.”

And it concludes: “He has retired in excellent health and in extremely good humour, to bless us with his presence for many more years to come.

“Graham… You have achieved so much in the past, I am sure that the future will also lead you to the goals you most desire.” 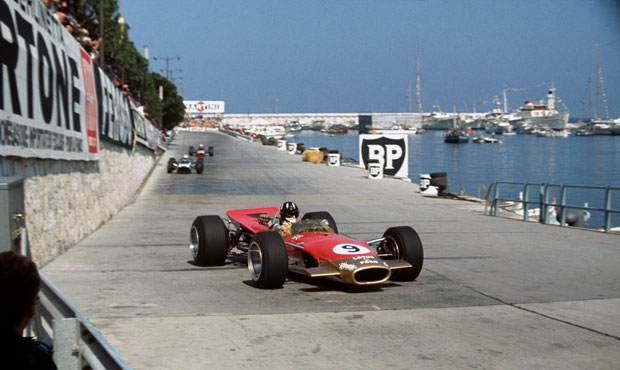 Hill leads into Tabac in the 1968 Monaco Grand Prix

His 1969 Life at the Limit autobiography concludes with “gorgeous nurses… rubbing cream onto my bottom” – one of the few pleasures to stem from a horrendous crash in the United States GP at Watkins Glen, his last as a works Lotus driver.

Stewart was not alone in thinking that this painful occasion might have been an apt time to retire. But Hill, in the very last sentence, writes: “I must be thankful that the accident occurred at the end of the season and I did not miss too many races.”

By the time Graham, co-written by Neil Ewart, was due to be published Hill had added the 1972 Le Mans 24 Hours victory to his unmatched cv – and retired, finally, from driving; a decision, like all his best, apparently, made in the bath (while mulling the excellent performance of new signing Tony Brise in practice for the Belgian GP).

A more reflective work, Graham ends thus: “While I had been a racing driver I had often said to audiences during speeches and talks: ‘You know the risks, you accept them. If man can’t look at danger and still go on, man has stopped living. If the worst ever happens – then it means simply that I’ve been asked to pay the bill for the happiness of my life – without a moment’s regret.'”

The book – eventually published a year after Hill’s death – includes an extra chapter. Written by his wife Bette (below), it is unsurprisingly haphazard, breathtakingly stark and, despite the chin-up spirit that had been such a support to her husband throughout his career, terribly, terribly sad. 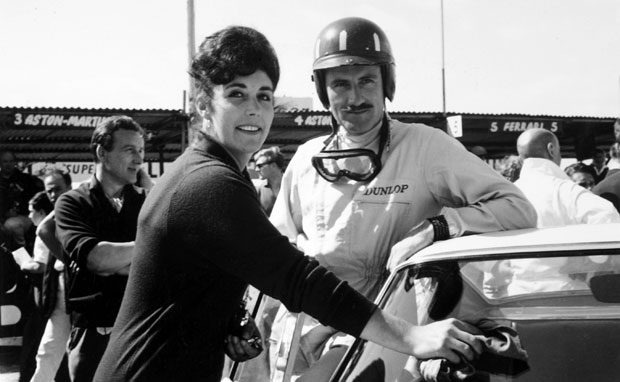 There is not so much as a flicker, however, about the monetary consequences of the crash. Hill’s paperwork was incomplete and, as a result, he was uninsured. The families of its five other victims had to sue.

Ian Flux was Brise’s number two mechanic. We spoke on the occasion of his driving GH2, the car that Hill and his crew had left behind them following an encouraging winter test at Paul Ricard.

“After the last funeral [the sixth in seven days] we went to a pub in Maidenhead and got slaughtered. That was the last time the rest of us were altogether. There was still hope, still talk, that the team might be able to soldier on in 1976, but we were deluding ourselves. Without Graham at the helm, wooing sponsors, driving us on, we had no chance.

“I wasn’t fully aware of the details, but it also soon became clear that his death had plunged Bette and the kids into severe financial difficulties. The team’s Transit was pressed into action again, this time removing furniture from a small house Graham kept near Brands Hatch. Everything had to go. It was now that I realised racing was a hard-nosed business: the team was asset-stripped without any sentimentality.” 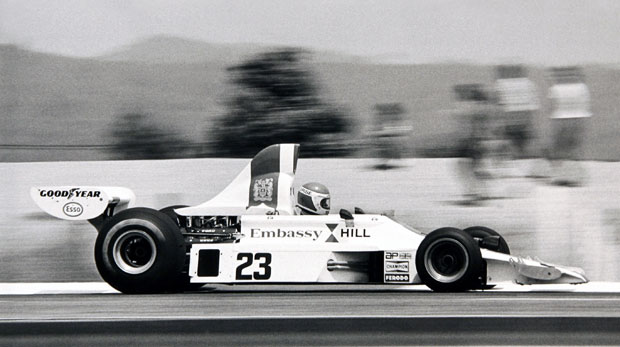 Hard-nosed, not hard-hearted: Graham Hill personified that shift better than anyone else.

Autocourse 1975-76, the first ‘adult’ book I read from cover to cover, keeps pride of place on my shelves. I have turned to it often as a source of material – but the extra page that was able to be stitched in always causes me to pause. Opposite its reverential black type is a full-page colour photo of a man with a military ‘tache, swept-back hair and mischievous grin: the ‘People’s Champion’. Unmistakeable.

To read the full tribute, as printed in Autocourse, then click here. Historic versions of the book are available on iPad and Android tablets – click here for more information.