The inaugural Canadian Grand Prix was held in September 1961. For sports cars rather than Formula 1, it was won by a 21-year-old local hero – despite the presence of Stirling Moss, at the peak of his powers, in the same make and model of car. 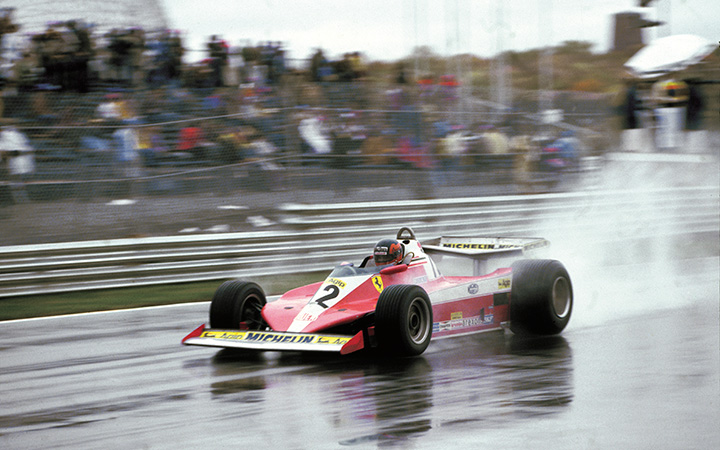 Philadelphia-born Canadian resident Pete Ryan had been a skier with Olympic aspirations before fully getting to grips with motor racing. As with many of his downhill ilk, he possessed balance and natural speed. Frank Gardner once told me that Ryan was the fastest he ever sat alongside – before placing him in the ‘balls-and-eyesight’ category.

At Mosport 54 years ago, however, Ryan necessarily played the waiting game and took a famous victory only after Moss began to suffer gear-selection bothers in the Lotus 19-Climax that the UDT-Laystall team had sold recently to an American owner.

An impressed Colin Chapman promised wealthy, well-connected Ryan a Team Lotus Formula Junior drive for 1962 but belatedly placed him with Ian Walker’s semi-works outfit. Wins in June at Monaco (a heat) and Mallory Park – a thrilling last-lap defeat of the works car of category benchmark Peter Arundell – were indicative of his talent and potential.

Sadly he was killed at Reims in July. Passengering chief mechanic John Pledger had enjoyed – endured? – their outbound trip to France. Now he had the sad duty of returning home at the wheel of Pete’s E-type.

Beginnings at St Jovite and Mosport

The Ryan family owned the famous Mont-Tremblant ski resort in Quebec’s Laurentian mountains and in 1964, to fill the summer gap, opened a circuit near the village of St Jovite. 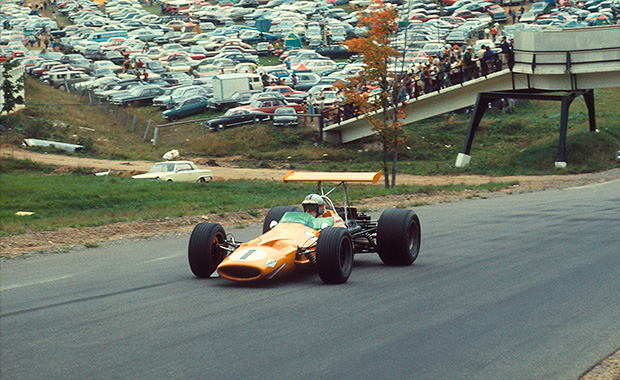 Extended the following year, the track possessed one of those layouts that sat well on paper. When the swells and swages of its picturesque setting were factored, it provided something of everything within its 2.65-mile challenge and was enjoyed by all – except perhaps Paul Hawkins and Hugh Dibley, an airline pilot by trade, whose Lola T70s back-flipped/took-off over a high-speed hump during practice for its 1966 Can-Am race.

For four years from 1967 – the Canadian GP’s world championship debut – it shared alternately the honour with Ontario’s Mosport Park in a Brands Hatch/Silverstone fashion. But its out-of-the-way nature and regular damage caused by severe winters saw it dropped after wins for McLaren’s Denny Hulme (1968) and Ferrari’s Jacky Ickx (1970).

Mosport, too, was another blend of fast sweeps and stomach-churning rise-and-falls. It survived in F1 until 1977 – the year of Jody Scheckter’s win for Canadian oil magnate Walter Wolf – before being replaced by the pan-flat but quirky Circuit Île Notre-Dame in Montréal.

O Canada, you have been blessed.

The move to Montréal

A great circuit doesn’t necessarily a great race make, but it don’t do no harm. With its light-on-downforce and heavy-on-brakes demands, plus its unyielding ‘Wall of Champions’, Circuit Gilles Villeneuve – it was renamed in his honour in 1982 – rarely disappoints. 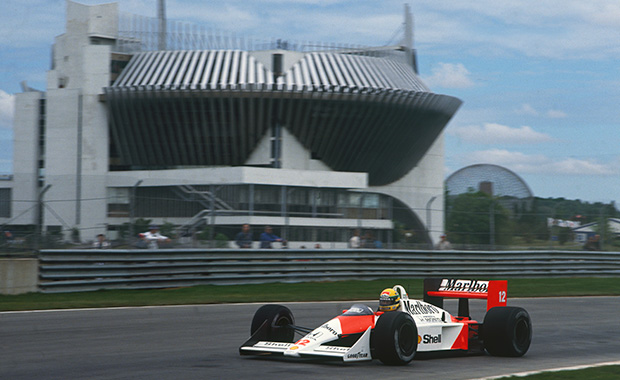 There’s something in the air out there on the St Lawrence Seaway.

In 1978, French free spirit Jean-Pierre Jarier, having been dumped twice by ATS – ‘in favour’ of Messrs Colombo, Bleekemolen, Binder and Ertl of Journeymen Inc – drove like Jackie Stewart to lead with almost contemptuous ease from pole position, as Team Lotus’s surprise replacement for the late Ronnie Peterson.

The crowd got what it wanted that bitterly cold day – a maiden Villeneuve victory – when Jarier’s runaway Lotus 79 leaked its brake fluid, but in truth the right man did not win.

Villeneuve makes his mark at home

Villeneuve’s astounding drives to second and third place in 1979 and 1981 were, however, indubitably worthy of victories. In the former, his Ferrari 312T4 led and chased Alan Jones’s clearly superior Williams FW07 throughout, the rest far behind: men against boys. In the latter, he barely batted an eyelid when the nosecone – cow-catcher? – of his bullocking 126CK became wrapped around its cockpit surround, and continued unabated once it had detached completely.

Even so he could catch neither the McLaren of ‘Wattie’ nor the Ligier of ‘’Appy Jacques’. This was the final F1 victory both for Laffite and Matra’s V12. You’d have to be stonehearted not to thrill to that. I’m sure that I could come to trust someone who expressed a dislike for either the affable Frenchman or for the ‘Vélizy wail’ – Mr Doppler at his most effective – but it wouldn’t be easy. 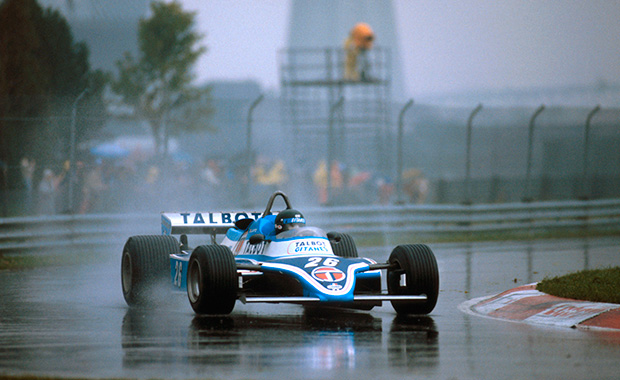 Once Nigel Mansell had ‘waved his last’ (1991) and Jean Alesi had scored another emotional win for number 27 (1995), the race settled into a familiar Schumacher-esque rhythm – although it was Ralf who led Michael to the historic familial 1-2 of 2001.

The wider talent pool of the latest generation has, however, provided some humdingers, with help from the Safety Car and dangerous groundhogs. Anthony Davidson was lying third in 2007 when one of the latter committed suicide against his Super Aguri’s front wing.

That race is remembered best for being Lewis Hamilton’s first GP win – he kept his head when all about him lost theirs – but there was another diamond sparkling amid the carbon-fibre shards: Davidson’s team-mate Takuma Sato.

The Japanese qualified 11th, dropped to last, rose as high as fifth, made an inspired early final pitstop on the cusp of another Safety Car period, and eventually finished sixth having overtaken the McLaren of reigning world champion Fernando Alonso. 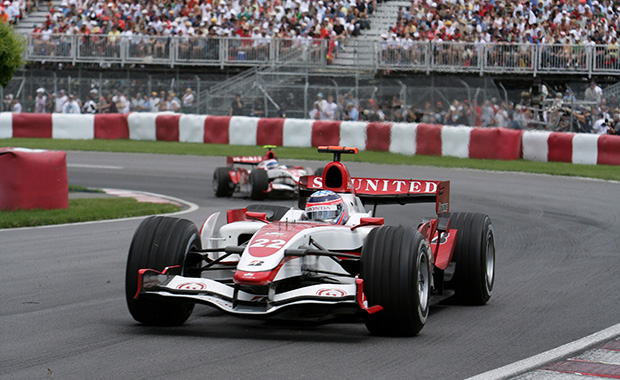 Button goes from last to first

Even Jenson Button, the man who eventually threaded it together, appeared frayed at times.

Soon after it, he tangled with Fernando Alonso’s Ferrari – scramble! – punctured in the process and dropped to last. 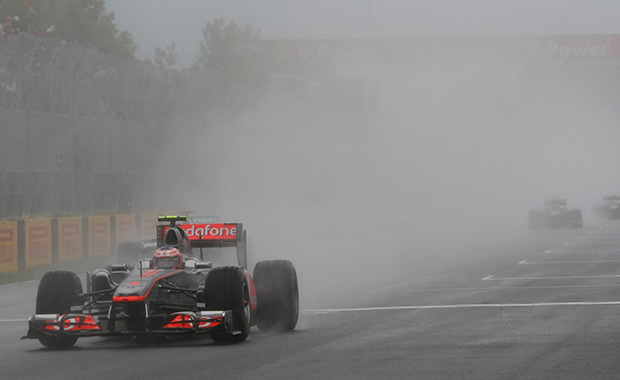 But thereafter he drove like a man possessed – of steely determination and velvety feel. He passed Mark Webber and Michael Schumacher – Mr Canadian GP himself – in quick succession. Set a Rindt-like fastest lap on the penultimate lap. And took the lead on the last when a flustered Sebastian Vettel made a Brabham-like error.

There have been lows, of course: the deaths of Ricardo Paletti in 1982 and trackside marshal Mark Robinson in 2013, plus the leg-shattering accidents of Jean-Pierre Jabouille and Olivier Panis, but the Canadian GP has often released the excitement from within F1 that can lie dormant elsewhere.

A passionate crowd, (usually) a large TV audience and a track – sited within a short distance of a global city – so punishing that its rewards must be hard-won and treasured forever thereafter.

That it was dropped from the 2009 calendar was indicative – was perhaps the first ripple – of modern F1’s self-destructive nature. Equally, that it has been revived since gives hope for the future.