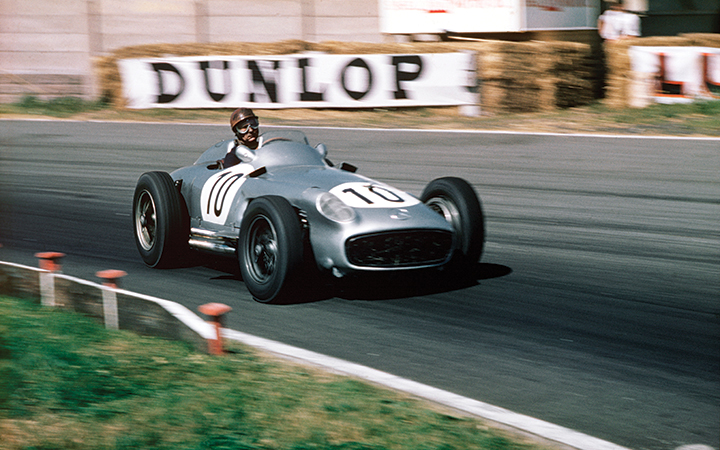 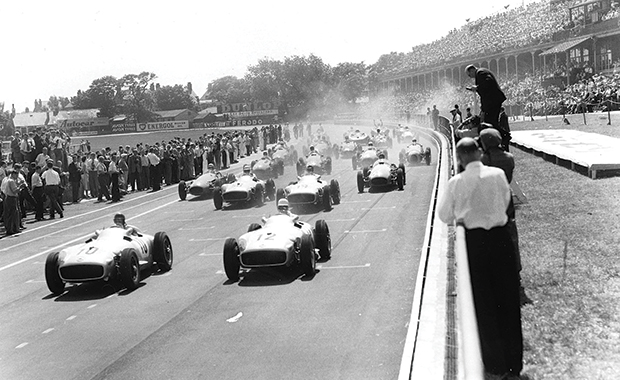 The 1954 Mercedes was fantastic in every aspect everyone, except for the driver, could not see! Remember that famous photo of Fangio hitting the oil drum at Silverstone? It was the ultimate F1 car really, way ahead of its time. It was simple and refined and of course it took Fangio to his third title. They were so far ahead of the opposition it was ridiculous. For an Argentinian like me it is nice to see our hero winning in one of the all-time greatest F1 designs.

The 2.5-litre normally aspirated engine had direct injection, which is what we have now in F1, 60 years later. It was the first car to have this so it was way ahead of the development curve in F1 at that time.

It had the inboard brakes and the engine was designed on the side to lower the line of the car, to be able to sit the driver on the floor. Again, something that none of the opposition even thought about until much later really.

It used new technologies like fuel injection and it was quick and reliable, winning nine of the 12 races it entered. And that is why I probably would not choose anything from the last 20-30 years, even when I was involved in F1. There were too many restrictions even then.

Every time I see the Mercedes-Benz W196 I look at it in wonder and awe. For the time in which it was designed and built, it is like a car from a different, future era. When you measure it against the Maserati 250F, which incidentally was a fantastic car and looked beautiful, there is no comparison from a technical perspective.

I remember Fangio saying it was not that easy to drive but you were always sure it would not break. That says a lot about the difference between German engineering and what other countries were doing at the time.

It would have been interestingly to see if Mercedes-Benz would have dominated Grand Prix racing had it not been for the Le Mans tragedy. In the 1960s we had lovely Formula 1 cars. I mean those 1500cc cars were absolute jewels, but jewels of simplicity. Mercedes was on a different level entirely and probably would have cleaned up for as long as they wanted to.

Return of a legend
Denis Jenkinson on the comeback they’d all been waiting for, as the new W196 dominated the French Grand Prix 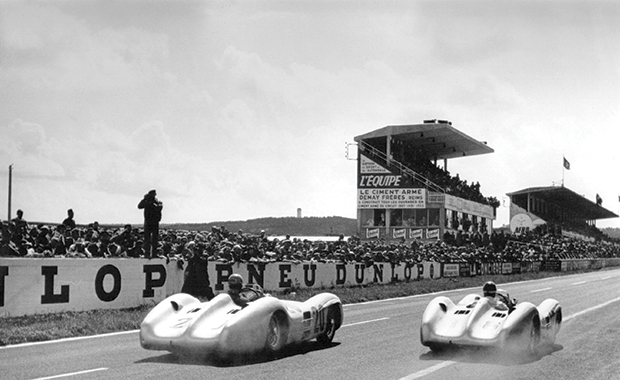 Everyone interested in Grand Prix racing has been awaiting the appearance of the new Mercedes-Benz with great expectations, remembering the peak of perfection that the 1939 Grand Prix cars had reached. With Rudi Uhlenhaut still in charge of design, and Alfred Neubauer as team chief, it was reasonable to expect the 1954 Formula 1 team to be the equal of any of its rivals, and also the season of racing with the 300SL sports cars in 1952 was an obvious practice for both design and organisation departments of Mercedes-Benz. The thoroughness with which the sports car field was attacked, with well-earned results, gave an indication of what one might expect when the Grand Prix team was finally put in action.

Keeping to their promise of three cars for the French GP at Reims, the Mercedes-Benz team made its first public appearance in a race on July 4, and achieved the result of first and second, positions that were held from the fall of the flag to the finish, while the third car set a new lap record before retiring when third. Clearly Mercedes-Benz was on form, and these racing cars, which could beat Ferrari, Maserati and Gordini on their first outing, were worthy of close inspection. The general shape of the cars, with all-enveloping body, is already well known to readers of Motor Sport, but what that body conceals is what interests.

Taking the power unit first of all, this is a straight eight-cylinder of 76min bore and 68.8mm stroke, giving a capacity of 2496cc and running up to 8500rpm. The engine is mounted on its side, some 20 degrees from the horizontal. Many readers have already complained that Motor Sport is too pro-German, but personally I feel that July 4 witnessed the beginning of a new era in Grand Prix motor racing, similar to that witnessed in 1934 at Montlhéry, when from the point of view of technical interest the current Alfa Romeos and Maseratis were made to look obsolete. The 1954 Grand Prix Mercedes-Benz sets a new standard, but in fairness I would say that I saw a similar standard, for its time, in 1949 when I had a first private look at the BRM. Unfortunately, it was obvious that the conception was beyond the capabilities of those concerned, as has subsequently been proved, but it was just as much a landmark in the development of the racing car.