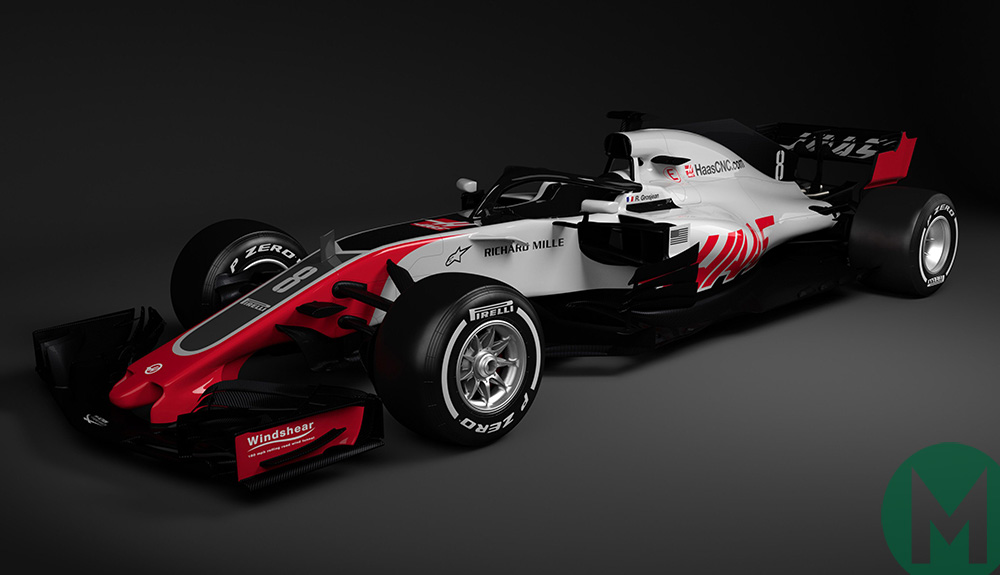 The Haas VF-18 is the first 2018 F1 car to be revealed, albeit only on screen. At first glance, it has a couple of interesting technical features that may well prove to be common to many of this year’s machines.

The new Haas takes its lead from last year’s Ferrari SF70H in having bodywork in the form of a turning vane to meet the 75-degree sweep-back regulation introduced last year. It’s a fairly simple and innocuous-looking bit of carbon fibre just ahead of the sidepod but was a fundamental part of the concept of last year’s Ferrari, arguably the most aggressively-designed car on the 2017 grid.

By using this vane – rather than the sidepods themselves (as on every other 2017 car) – to meet the 75-degree backwards sweep of the bodywork, it meant the sidepod openings could remain at around 90-degrees. This allows a better airflow capture and thereby smaller radiators than would otherwise be required for adequate cooling. This, in turn, means there was no need to stretch the gap between the front axle and sidepods as on other 2017 cars – helping retain a relatively short wheelbase. The resultant compact dimensions were a key part of why the Ferrari could use plenty of ballast to give the required fore:aft weight distribution range from track-to-track. This was a key part of why it was a more forgiving car to set up than the rival Mercedes, more tolerant of different track layouts, tyre compounds and track temperatures.

The Haas also appears to have been inspired by the 2017 Ferrari in placing the radiator inlets at the top of the sidepod, in contrast to the previous fashion. In this way the air arriving from the gap between the nose and the front wheel would have been less disrupted and slowed by having passed over the upper wishbone of the suspension. Mercedes and Toro Rosso actually went to the trouble of forming an extension atop the wheel hub to give a higher upper wishbone, allowing the air headed for the conventional low-mounted radiator inlets to pass beneath it.

Whether these similarities between the new Haas and the 2017 Ferrari are through the close family relationship between the two teams or indicative of last year’s Ferrari being widely copied in 2018 will be progressively revealed as the other cars are launched over the next week or so.