At times, Lewis Hamilton and Sebastian Vettel appear best of friends. It’s partly down to Ferrari’s performance, but the pair have realised they are both blessed, writes Chris Medland 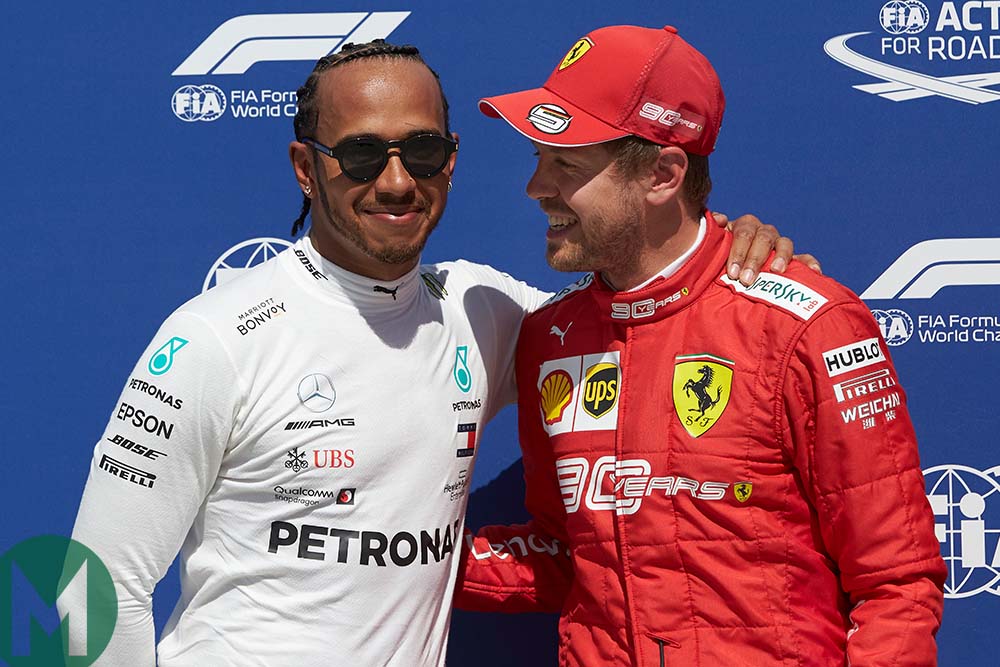 Hamilton and Vettel after qualifying in Canada Photo: Motorsport Images

The Canadian Grand Prix brought Lewis Hamilton and Sebastian Vettel close on track. And the ensuing drama meant that few have been talking about the pair’s rapport outside the cars.

For much of the season so far, the paddock has been the only place to observe Vettel and Hamilton’s dynamic because it has been frustratingly rare to see two of the most successful drivers in the history of Formula 1 go wheel-to-wheel proper fight. When they have it has been Hamilton coming out on top.

But qualifying in Montreal finally saw Vettel take his first pole position of the season – his first in 17 races no less – with a final lap that knocked Hamilton down to P2.

So the gracious reaction from the championship leader immediately after that disappointment betrayed a lot about the relationship between the two. 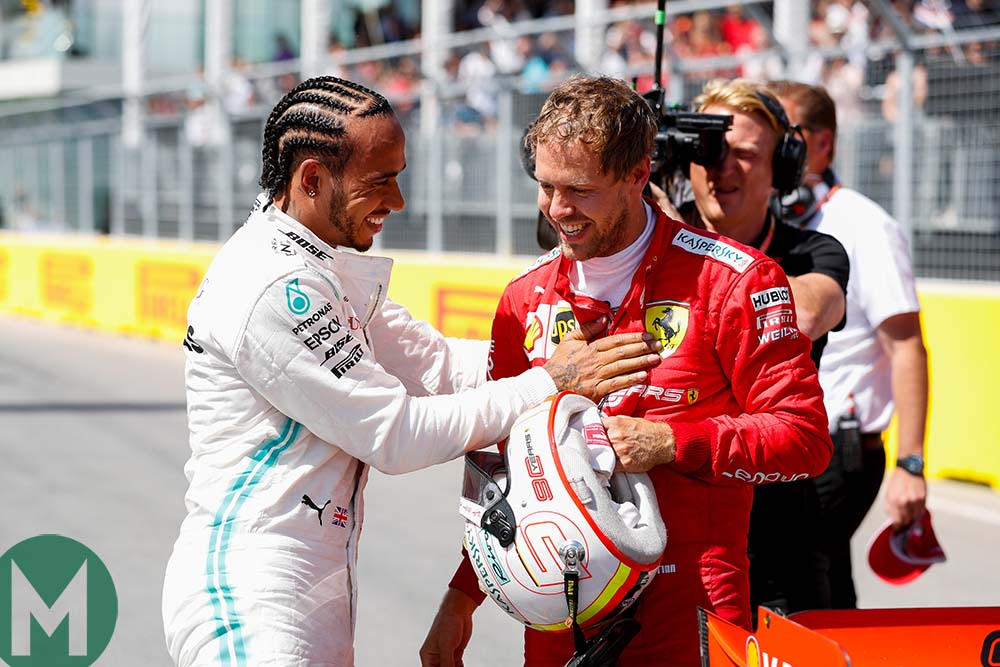 “Honestly, I don’t know for whatever reason but I don’t particularly feel disappointment,” Hamilton said.

“I’m actually really happy for Seb, he clearly did a really great lap.”

“Lewis and myself share great respect. I think we’re both very, very blessed to be in that position.”

The compliment came after a different – and somewhat inadvertent – one from Vettel himself, that had the pair joking with each other ahead of the race.

“I wasn’t quite sure if Lewis was improving,” Vettel said of his final lap. “Normally he’s pretty handsome or pretty good around here…”

“Pretty handy is what I wanted to say, but there you go, handsome as well. Look at him!”

The exchange is far from the bitter title rivalries that the sport has seen in the past although, that the relationship is so good right now is less about the pair finding a common ground than Ferrari’s inability to mount a significant championship challenge. 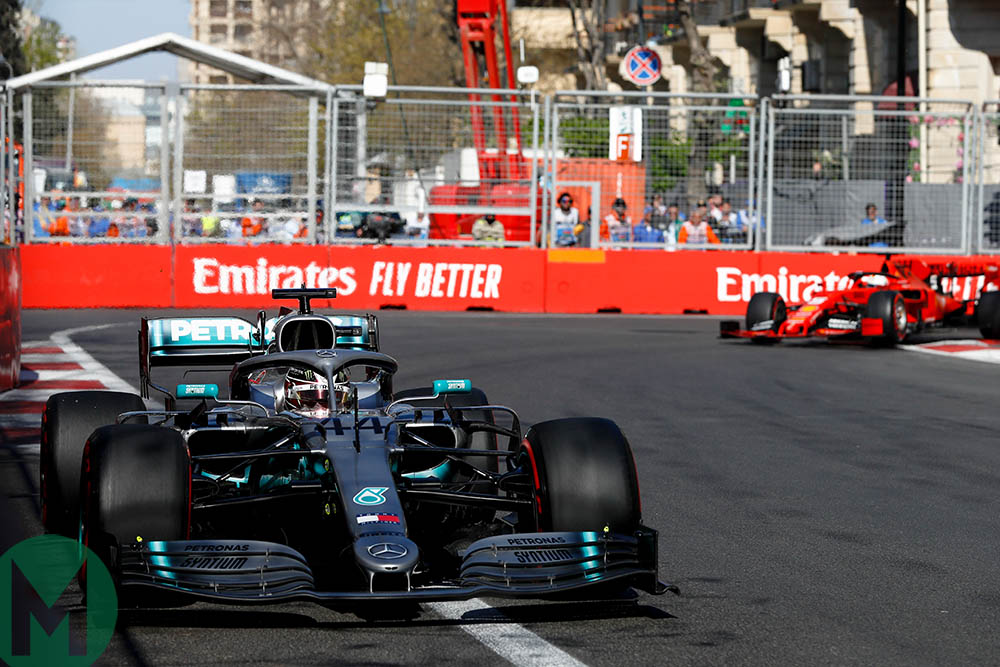 It’s hard to argue against the fact that Hamilton is performing at a higher level than Vettel, and Vettel knows it, which makes the times he gets the better of the Briton all the sweeter.

And it also means that, for Hamilton, a defeat or two to Vettel doesn’t sting quite as much as it could. At the point they were laughing together on Saturday night, the gap between the pair was 55 points. It would soon become 62. Even if Vettel had kept his car on the road, a 48-point advantage after seven races would hardly have left Hamilton sweating.

At a race track, the respect is clearly there between the two drivers, even if they share little in common away from it. It’s a respect that Vettel always had for Hamilton, but that perhaps was not reciprocated in the same way initially.

‘A worrying development for F1’ —Mercedes strengthens its hold

When the German was racking up his four consecutive drivers’ championships with Red Bull, Hamilton knew he was capable of similar himself if given the right machinery. At times certain comments almost verged on being bitter, because all he wanted was the same opportunity to win titles.

The Mercedes move gave Hamilton that platform, and he has duly delivered. But at the same time, the effort required to secure a title even with the quickest car – and perhaps emphasised by the 2016 championship defeat to Nico Rosberg – has led to an appreciation of what Vettel achieved with Red Bull. 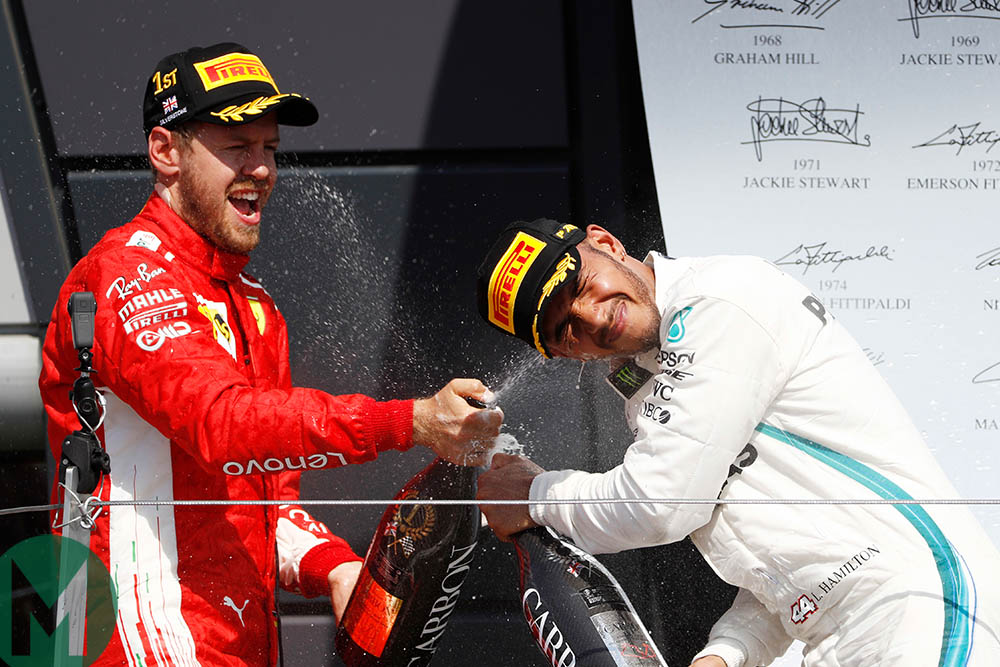 And the pair are maturing, with Hamilton now 34 and Vettel nearly 32. Even in the aftermath of Sunday’s controversial result, Vettel was able to speak highly of the man who finished behind him on track but stood atop the podium.

“I think Lewis and myself share great respect and I think we’ve achieved so much in the sport,” Vettel said. “I think we’re both very, very blessed to be in that position so one win up, one win down, I don’t think it’s a game-changer if you’ve been around for such a long time.”

At that time, it was fresh in Hamilton’s mind that Vettel had called for fans not to boo him on the podium. But it also hadn’t escaped the defending champion that his rival had faced questions about his future earlier in the weekend.

Words of reciprocation from the race winner were sincere, as they followed an impassioned monologue from Vettel about the state of F1 and his belief that it is no longer the sport he fell in love with. But it is the same sport that has delivered an era when two four-time world champions went head to head for a fifth for the first time in history, and for two of the greatest teams at that.

Hamilton came out on top last year, and looks like he will again this season. But those championships mean more to him when won against a combination such as Vettel and Ferrari than an internal battle.

That said, respect doesn’t mean friendship. The relationship was not as warm at the same point 12 months ago when Vettel headed to the French Grand Prix with a one-point championship lead. Nor did the respect shine through when Ferrari won at Silverstone and Vettel spoke of taking the English flag to hang in Maranello.

The undercurrent for a more explosive rivalry is still there if circumstances allow, but for now the pressure isn’t on Hamilton, which keeps matters so much more calm between the two 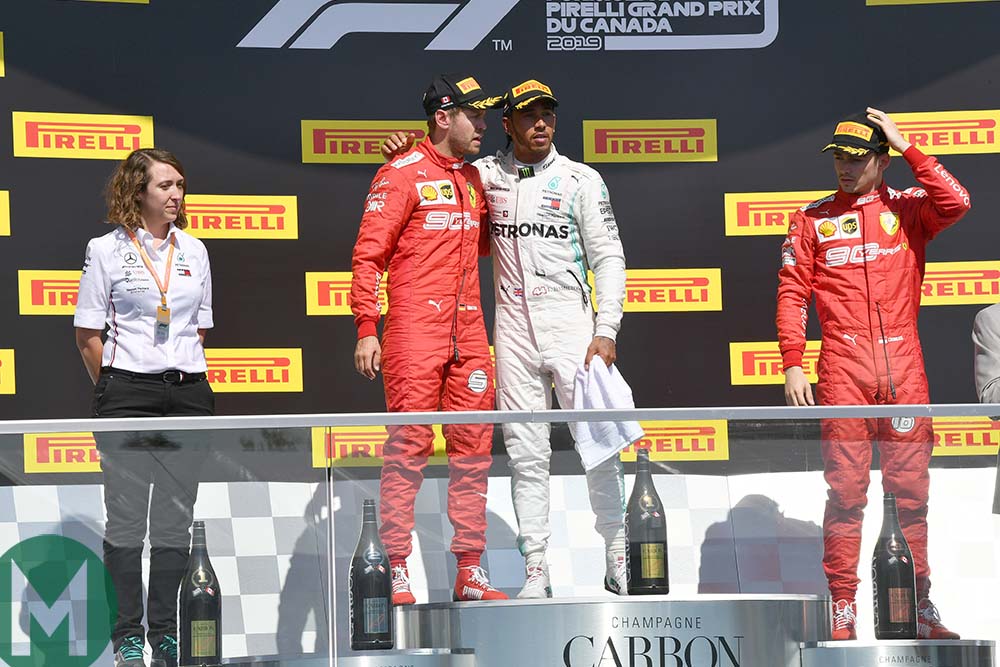 Hamilton invites Vettel on to the top step of the podium after the Canadian Grand Prix Photo: Motorsport Images

Of the current grid, only Kimi Räikkönen has achieved what Hamilton and Vettel have in winning a world championship, and he’s not going to add to his 2007 triumph at Alfa Romeo.

As much as they have each provided the other with the greatest threat over the past three years, races such as Sunday show the pair with nine titles between them need each other.

“I second what Seb said in the sense of the respect that we’ve always had between us,” Hamilton said. “We’ve had a lot of years racing together and there’s probably no one that I enjoy racing with on the track more than he.

“I always relish opportunities to battle like we’ve had (in Canada) and the previous years and they’re really memories that I will always cherish and I hope there are many more, so stick around.”