Pick a side: Max Verstappen or Lewis Hamilton.

That’s pretty much how it feels after the British Grand Prix, where the inevitable happened as the two title rivals collided at high speed.

If you’re picking the side of Hamilton, you’ll feel a 10-second time penalty was unfair, and that their contact at Copse was a racing incident. If you’re Team Verstappen, you’re probably believing a harsher punishment was needed for a crash that saw the Dutchman taken to hospital for precautionary checks after a 51g impact.

“It was a desperate move…” Red Bull team principal Christian Horner fumed. “Copse is one of the fastest corners in the world, you don’t stick a wheel up the inside, that’s just dirty driving.”

You won’t be surprised to know that was not a view shared by Mercedes’ Toto Wolff.

“I think if that would have been a low- or mid-speed corner then it wouldn’t have been a big debate what the consequence of that was – a five- or ten-second penalty – or less of a debate,” Wolff said. “But it was a high-speed impact, it is a corner that takes lots of guts to even take flat alone, and when two cars are trying to drive through it they need to leave each other space in order to make it through the corner and that wasn’t the case.

“The stewards think ten seconds was appropriate, I guess because both drivers were part of the accident, not one alone. It’s always much more nuanced.” 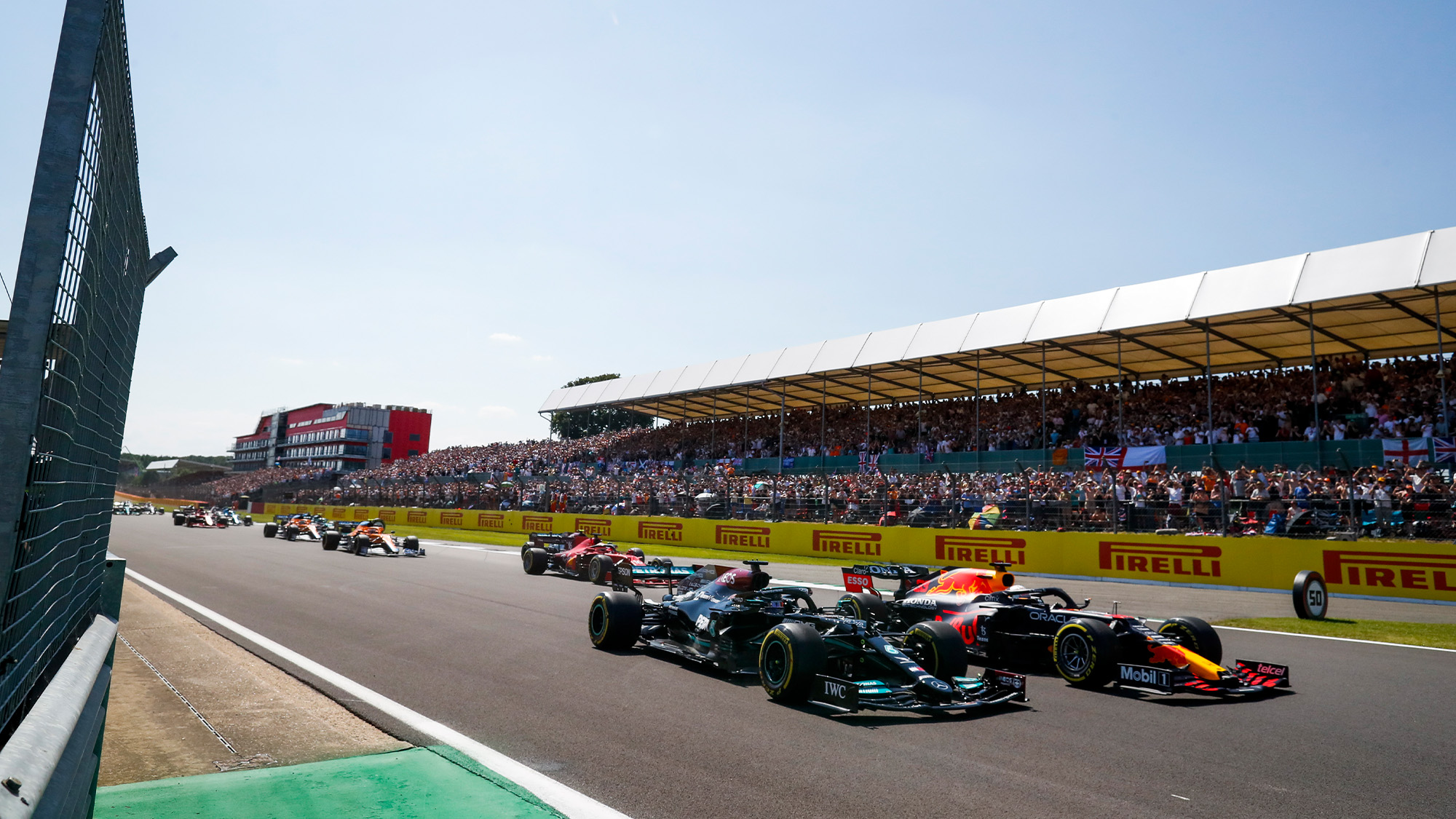 Of course they’d disagree. But what we can agree on is that an incident like this had been coming. Wheel-to-wheel moments had been regular throughout the first part of the season, with Hamilton yielding to avoid damage at Imola and Barcelona. But after seeing Verstappen win three in a row and take pole position away from him in the Sprint yesterday, the defending champion knew how crucial it was to get back ahead on the opening lap. 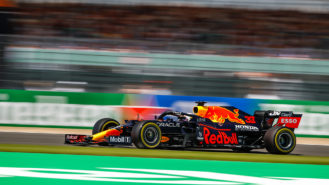 Silverstone felt ground-breaking for myriad reasons. After nigh on 18 months of lockdowns, social distancing and meeting in groups of six, we had a capacity crowd at a Grand Prix.…

The fight off the line was intense, as Hamilton got alongside Verstappen into Turn One and they so nearly touched as the Red Bull hung on around the outside. After setting him up for a few corners, Hamilton got a great run onto the Wellington Straight and squeezed Verstappen, the pair millimeters away but again the championship leader firmly holding on as he held the inside.

Hamilton repositioned himself, got the exit out of Luffield he wanted and slipstreamed on the run to Copse. Verstappen moved right, Hamilton went further and wedged open a gap next to the old pit wall to get the inside line. But just as he was about to pull fully alongside he had to lift to try and make the corner. Verstappen didn’t yield on the outside either, and left front of Mercedes met right rear of Red Bull to send the latter spinning into the barrier at enormous speed.

Behind them, Charles Leclerc had already beaten Valtteri Bottas off the line from fourth on the grid and he picked up the pieces to sweep past Hamilton on the exit of Copse to lead, just before the safety car was deployed. Verstappen clambered out slowly, clearly shaken and sore, and gingerly walked into the back of an ambulance as the race was stopped to allow barrier repairs. 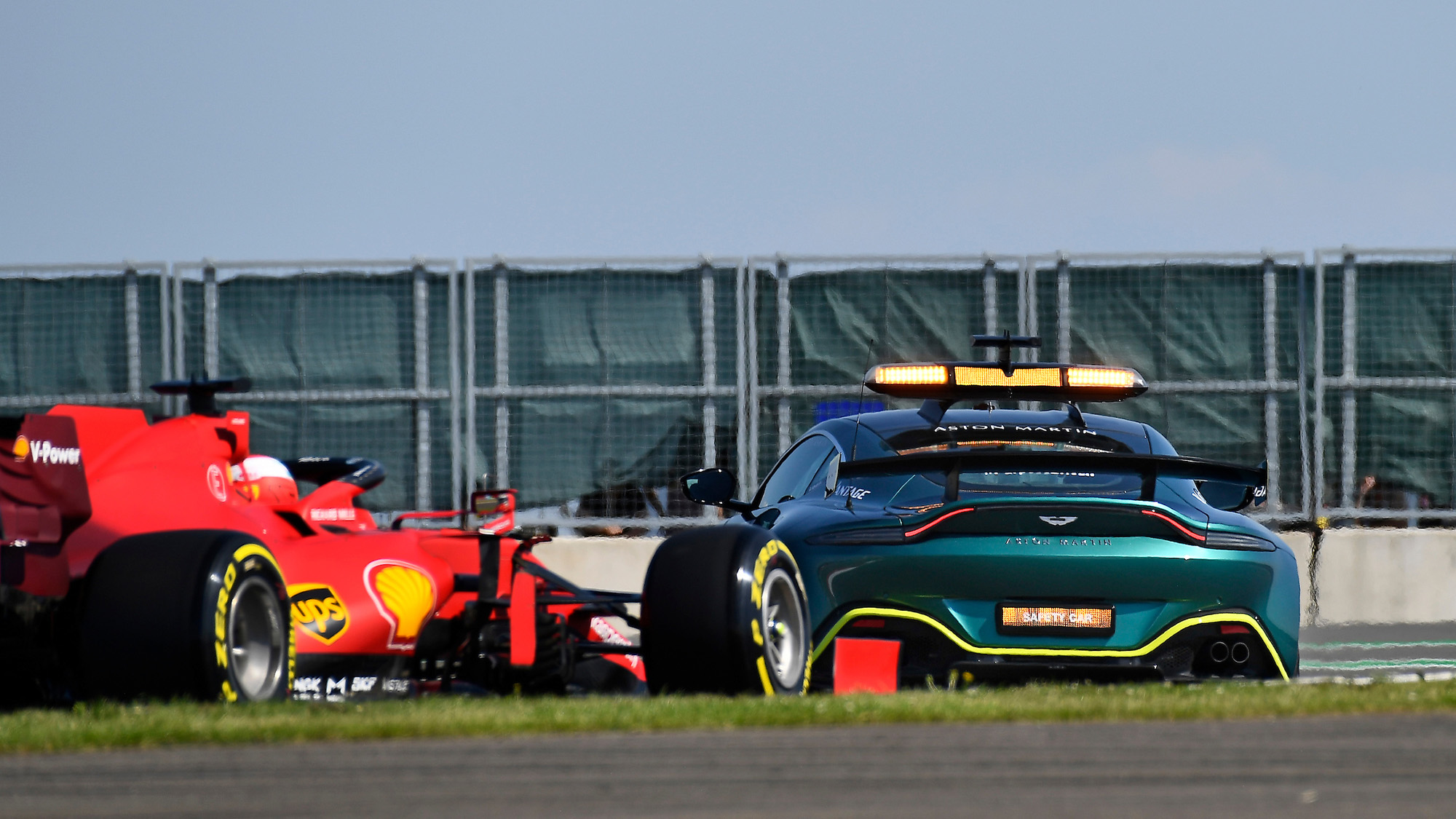 Leclerc found himself leading after the Hamilton/Verstappen collision

“We’re in a battle and I think this year he has been very aggressive and most times I’ve had to concede and avoid incident with him and live to fight on later in the race,” Hamilton said. “As you saw yesterday once he’s out in the clear they’re too fast, so when an opportunity comes I’ve got to take it, that’s what we’re out here doing racing.

“I got a great exit out of (Turn) Seven and was really happy with the dummy, I could go to the left then the inside and get up that gap, fortunately he wasn’t able to close it and unfortunately the aggression stays from his side and we collided. It’s unfortunate, but it’s a racing incident, these things happen.”

It’s the focal point of the race, but it was also amplified by what came next, which was so nearly a sensational upset.

Leclerc would restart from pole position with Hamilton alongside him as a grid start resumed the race, but the expectation was for the Mercedes to cruise past and try to negate whichever penalty came his way. That penalty was confirmed as ten seconds – to be served at his pitstop – not long after the race resumption, but by then the challenge was clearly much bigger. 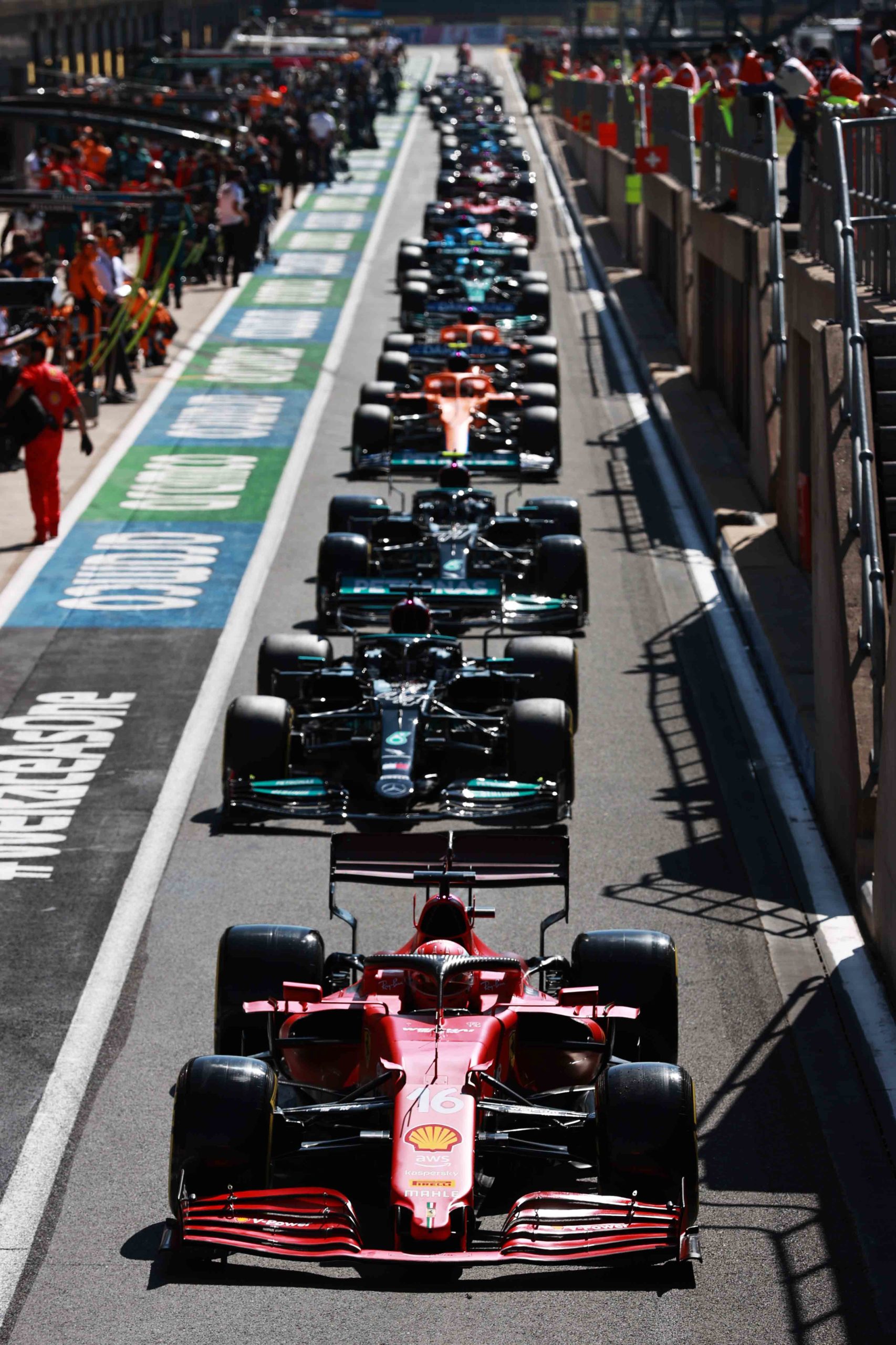 The Ferrari pulled away relatively easily and didn’t come under major threat from Hamilton in the first stint, never really defending at any stage and running a strong pace. The longer it went on, the better shape Leclerc looked to be in as Lando Norris copied him by jumping Bottas on the second start and holding off the Finn.

With Leclerc’s lead over two seconds, he started to look favourite for the win, but a complaint about his power unit cutting out saw that gap diminish on a few occasions and the question was whether the Ferrari would let him convert his strong position.

“I was really on it every lap, so I don’t think there was one lap where I did a big mistake,” Leclerc said. “With the problems we had with the engine I thought my race was over, I had quite a lot of things to do on the steering wheel, but I think we managed the situation very, very well and managed to diminish these engine cuts for the rest of the race.”

With the issues resolved, Leclerc didn’t even have to react to the undercut as Hamilton came into the pits first, with the home favourite stationary for 14.2 seconds. Ferrari could extend the stint slightly and save tyres, meaning he had a two-lap advantage after his stop. 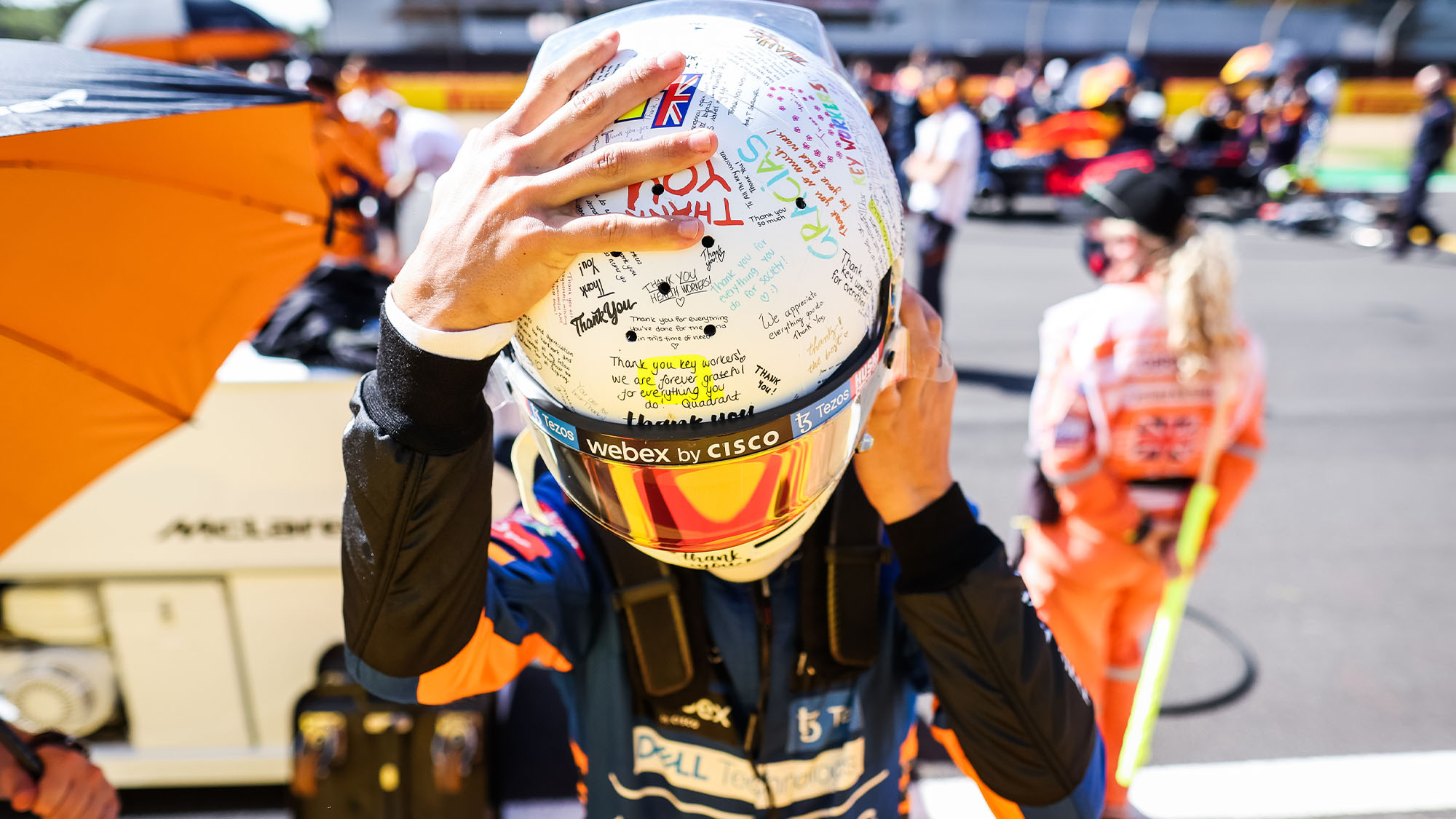 By then, Mercedes had a stronger hand as a slow right rear tyre change delayed Norris and allowed Bottas to jump him, with Hamilton in turn easily clearing the McLaren. But then came a number of laps where Leclerc actually extended his advantage out to ten seconds and Bottas had no response.

“Losing a place at the start compromised the race,” Bottas said. “So when Lando stopped, quite early, he had a slow stop and I had to react to that, as that was the best chance to get ahead of him, so we took the opportunity. At the same time, we knew that was going to compromise the end of the race.”

Unable to make an impact on Leclerc, the message soon came for Bottas to yield to Hamilton, which he duly did with 13 laps to go. At the same time, Hamilton took a second out of Leclerc’s lead to cut the advantage to 8.7sec and it was suddenly game on. The gap came down quickly but the Ferrari had been able to hold Hamilton off in the first stint so the tension rose into the final five laps. 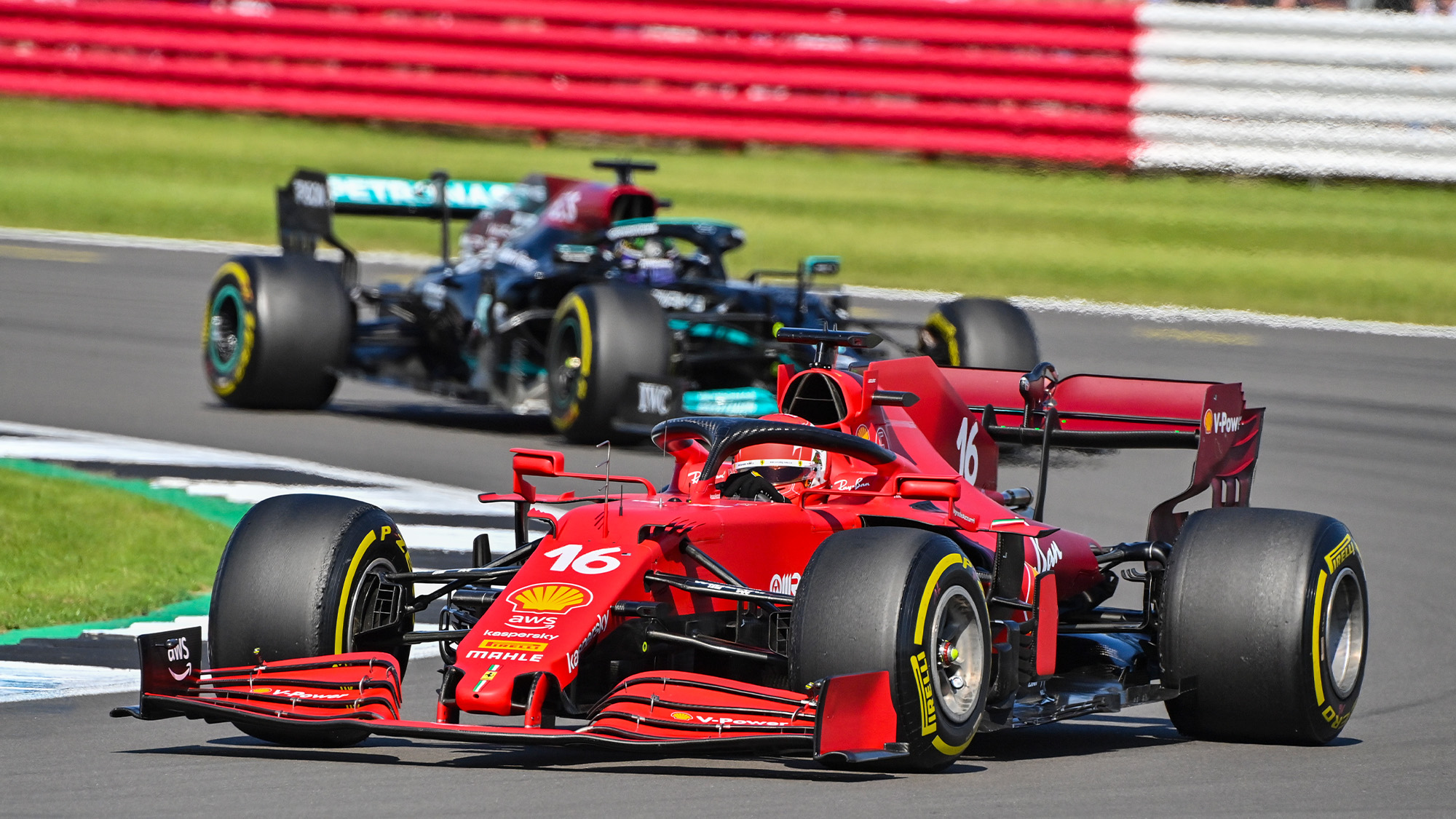 Hamilton loomed large in Leclerc’s mirrors as the finish approached

With three to go, Hamilton was within DRS range, got a tow towards Copse, and went to the inside once again…

Leclerc tried to hold on but had taken a wide line and ended up running over the kerb on exit to lose the lead.

“I knew Lewis was on the inside,” Leclerc said. “I left a space and unfortunately I had stayed in front but at the very end of the corner I had a bit of a snap and lost time and Lewis got in front of me.”

For Hamilton, that’s how the Verstappen battle should have gone.

“Charles was saying he was very respectful in terms of leaving a gap. Obviously I got relatively, somewhere alongside him, so he knew I was there, but he stayed committed and did a wider line and he nearly kept it, that was really great racing.

“In that moment I backed out at one point just to make sure we didn’t come together but I think it was just a really nice balance and how the racing should go. And of course in a perfect world that’s what would have happened in the first attempt. But yeah, different time, different place, different driver.” 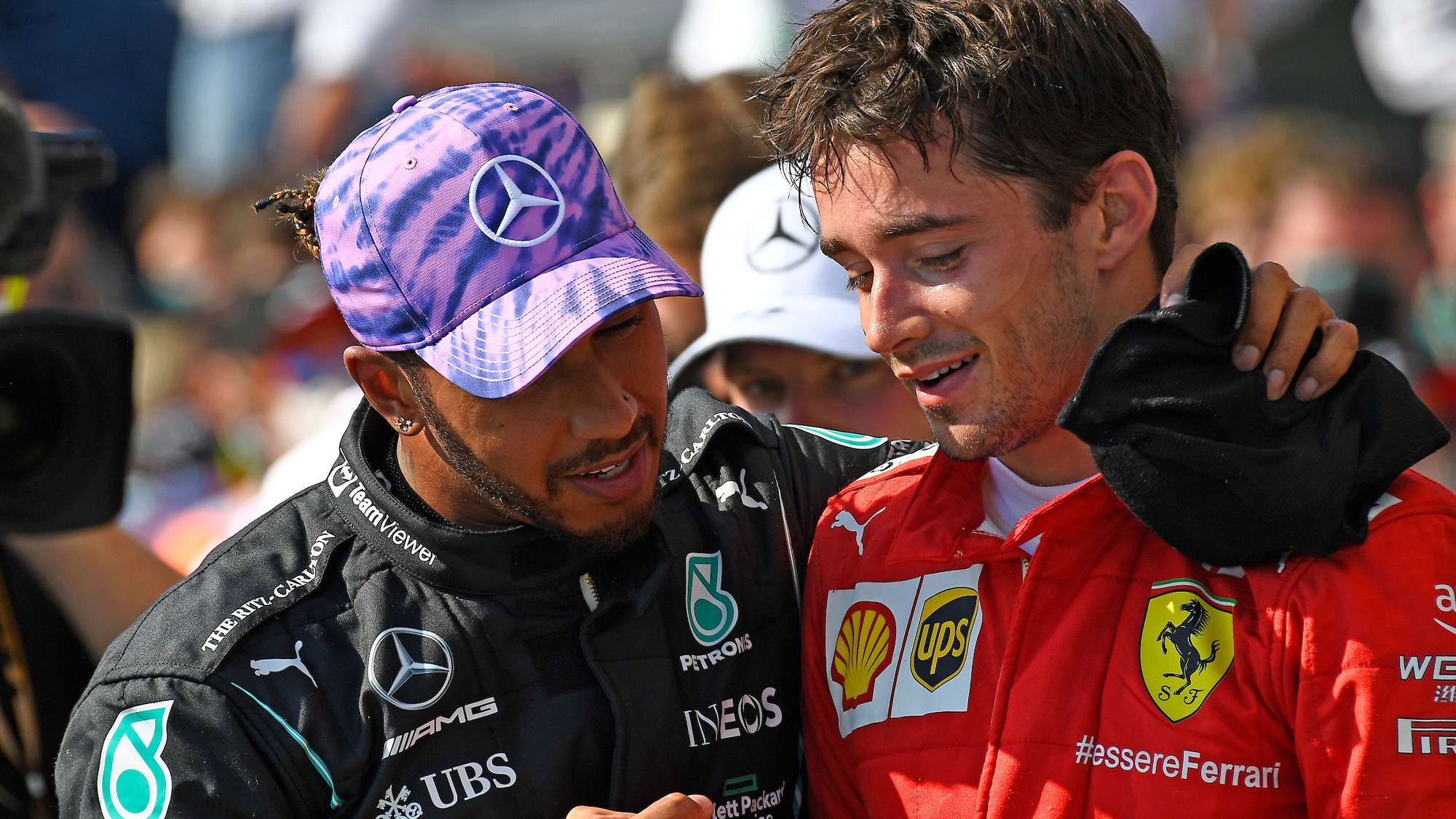 No hard feelings after Hamilton’s pass on Leclerc at Copse

Opinions will rage over whether the penalty was deserved, too lenient or too harsh, but in the end of the day it provided a thriller where Leclerc genuinely felt he could hold on and win until the moment Hamilton came by. Bottas rounded out the podium ahead of Norris and Daniel Ricciardo, with Carlos Sainz rueing his own slow pit stop that left him stuck behind the Australian.

There were points for Fernando Alonso, Lance Stroll, Esteban Ocon and Yuki Tsunoda, while there would have been for Sergio Perez but for a late stop for soft tyres designed solely to take the fastest lap point away from Hamilton and prevent Verstappen’s points’ lead from being cut to seven. 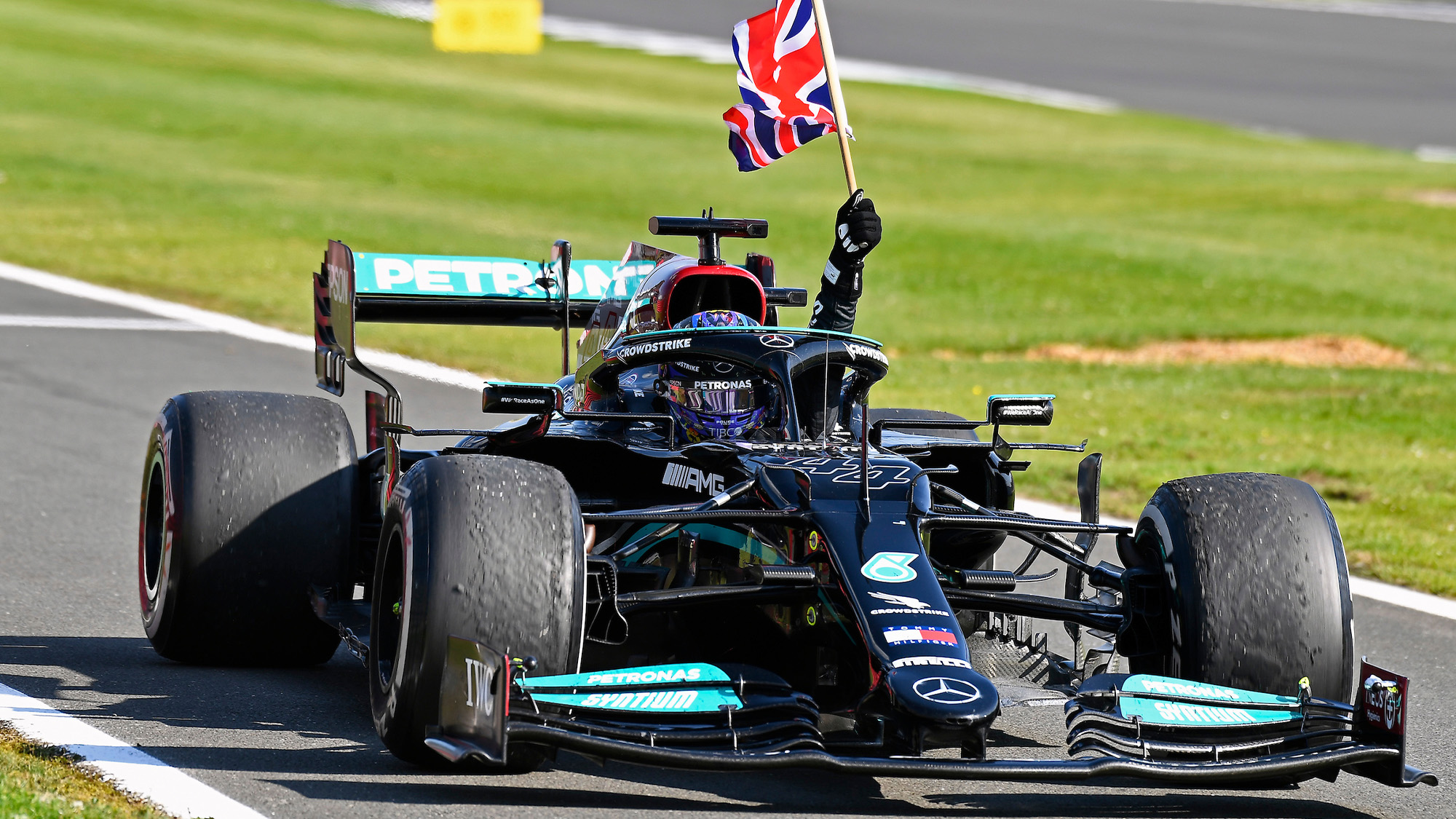 But it was the Dutchman who had the final word, having seen Hamilton celebrate with a raucous home crowd, flying the Union Flag from his cockpit and in front of the packed grandstands.

“Glad I’m OK,” Verstappen posted on social media. “Very disappointed with being taken out like this. The penalty given does not help us and doesn’t do justice to the dangerous move Lewis made on track. Watching the celebrations while still in hospital is disrespectful and unsportsmanlike behavior but we move on.”

Somehow, I don’t think anyone will be moving on very quickly. 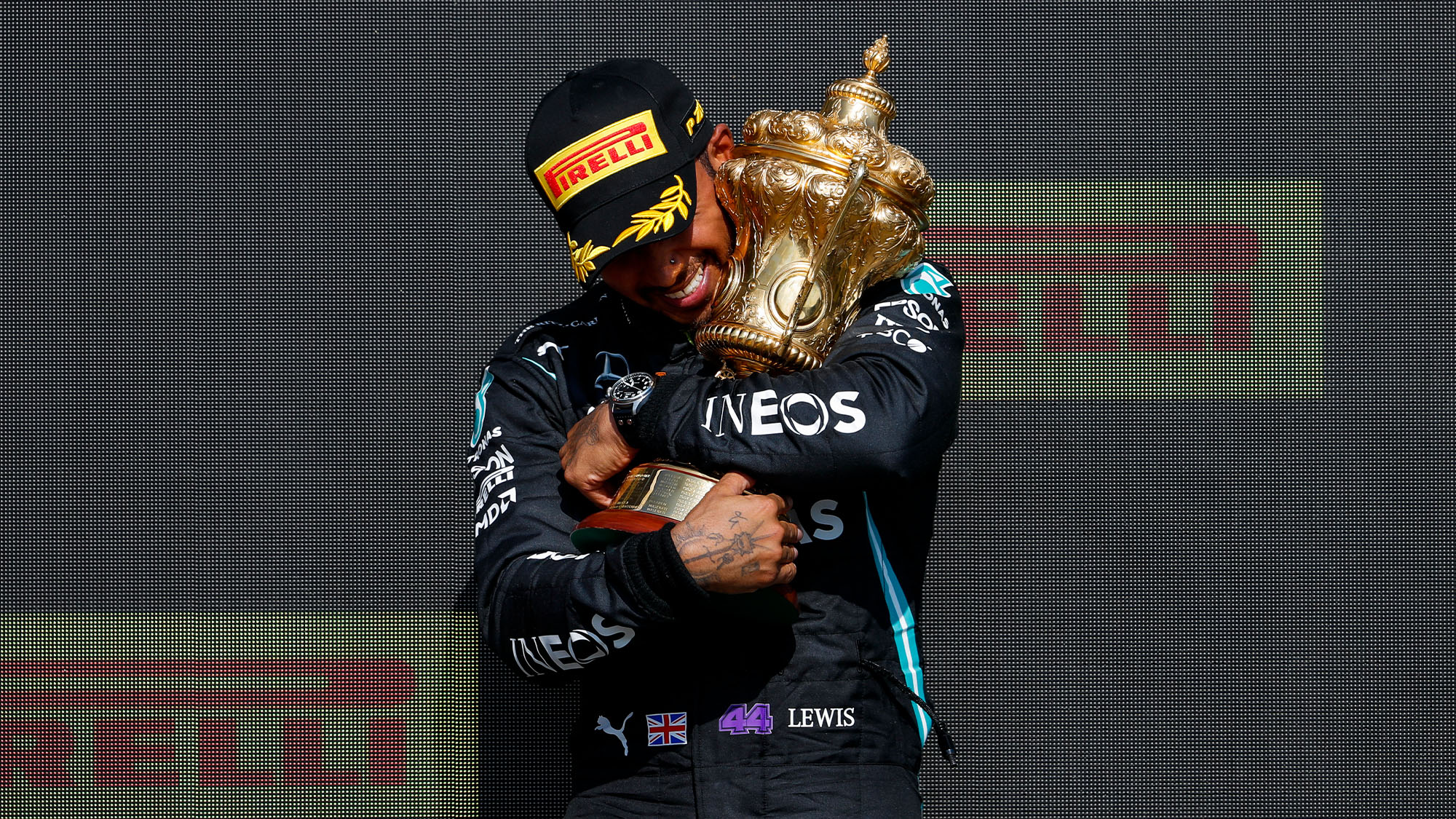