Last year’s sports personality of the year, Lewis Hamilton, has been left off the BBC’s shortlist for this year’s award after missing out on winning the F1 championship.

The list of nominees was published this morning, following the Abu Dhabi Grand Prix, where Hamilton lost out to Max Verstappen on the final lap.

His Dutch rival is up for an award: the world sports star of the year, which is open to international competitors.

This year’s Formula 1 season has been widely acclaimed as one of the best in the history of the world championship, with two drivers, at the top of their game, battling for race wins week after week.

Hamilton overcame a 19-point deficit in the final races to head into the Abu Dhabi decider level on points with Verstappen, and he effectively led the race from start to lap 57 of 58. 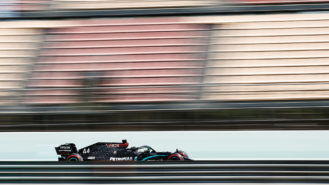 We have already counted rated Lewis Hamilton's F1 wins from 100 to 90 in order of greateness, and now comes the top 10: the finest victories from Hamilton's grand prix…

“I feel you deserve something this year. That was an exceptional year,” said former team-mate Jenson Button to the Mercedes driver at the end of the race.

But, as runner-up in the championship, Hamilton’s face may not have fitted on this year’s sports personality of the year shortlist of winners, which comprises of Olympic gold medallists Tom Daley and Adam Peaty; Britain’s most successful Paralympian, Sarah Storey, who added to her gold medal tally this summer; Tyson Fury, who retained his WBC title this year; US Open winner Emma Raducanu; and Raheem Sterling, who played a decisive role in Manchester City’s Premier League victory, as well as England’s Euro 2020 run to the final.

Voting for the main award will be open during the BBC live show on Sunday; polls close for the world sports star of the year tomorrow, on December 14.

Hamilton was named sports personality of the year in 2020, after winning a record-equalling seventh Formula 1 title, and days before his knighthood was announced in the New Year’s honours list.