When you look at the progression of the record for the most Grand Prix victories by one driver, it once appeared as if Alain Prost’s mark of 51 wins was going to be tough to beat, so what Michael Schumacher achieved was, quite frankly, incredible.

In raising the bar to 91, Schumacher nearly doubled Prost’s number and, watching the legendary German achieve it, there was always a feeling that it would take something special to even get close.

Lewis Hamilton always had that potential, entering the sport in a car that was capable of fighting for the championship in his rookie season gave him that platform. So at the end of his second season, when he had won one title and agonisingly missed out on another, Schumacher’s records of 91 wins and seven championships did seem achievable.

But there’s a reason such records are so hard to break. Hamilton did not have the car he needed for more titles after that, even if he clocked up at least one victory in every season. The latter stat was a testament to his skill and talent, which would ensure he had the chance to end up in the right place at the right time.

Six years ago, Hamilton had just one championship and 22 wins. I say “just”, that’s still one more win than Kimi Räikkönen’s whole career has yielded, and seven more than Jenson Button, but you’d have expected so much more at the end of 2008. 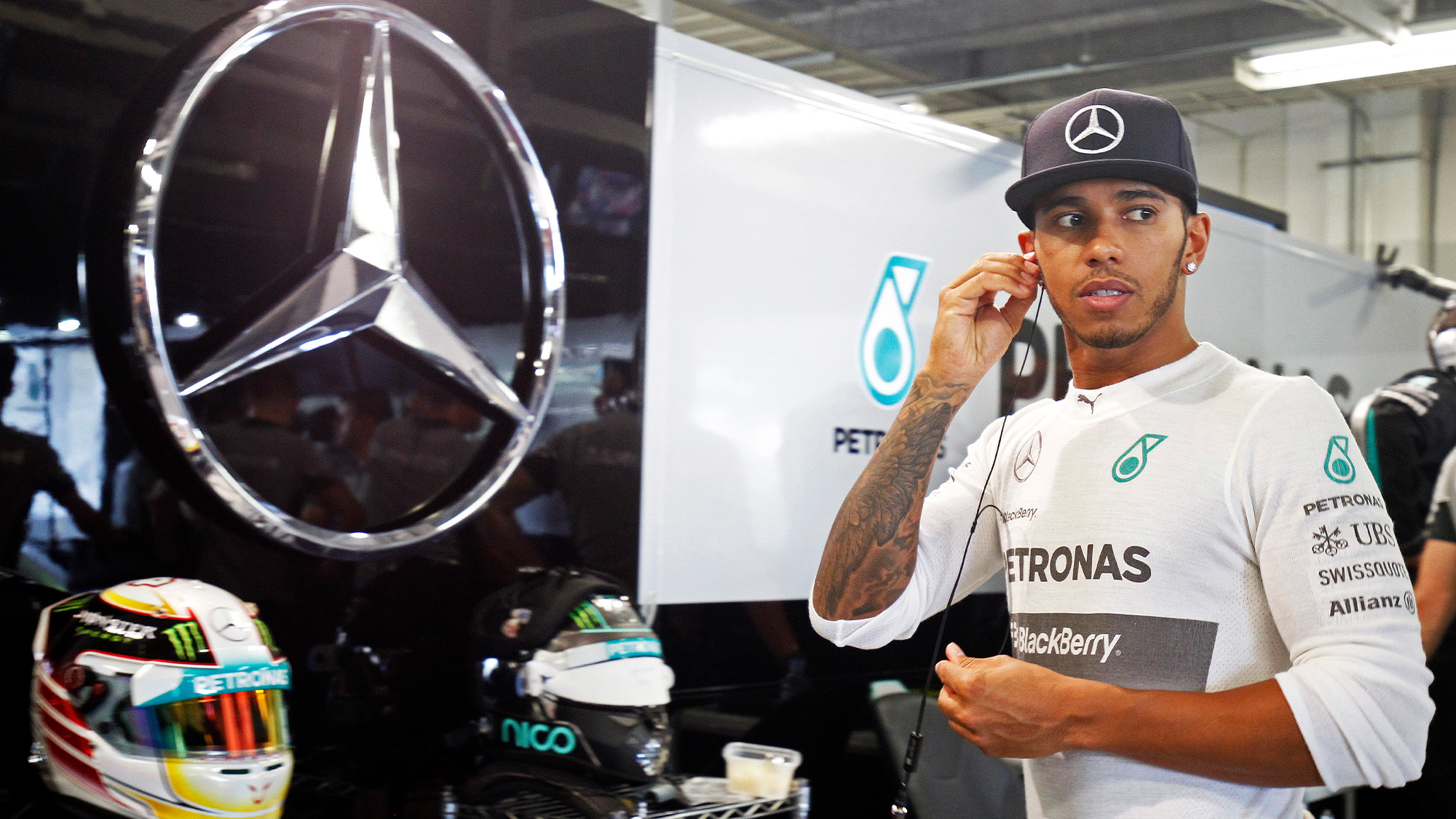 At the beginning of 2014, coming into his second season with Mercedes, Hamilton was 69 wins away from Schumacher’s record

Like Schumacher, it was a move to an iconic brand with the resource and potential to dominate that finally saw Hamilton able to rack up the kind of wins he had threatened to since entering the sport. And it all hinged on a crucial decision.

In late 2012, Hamilton’s contract was running down but he had been a McLaren driver his whole career. The team had always been in the mix for wins and championships since the late Nineties, and he made up one half of a British dream team alongside Button.

Mercedes? Well they had returned in 2010 by buying out the then defending champions Brawn but had been finding F1 a tough nut to crack. The established big two of McLaren and Ferrari were fighting with Adrian Newey’s Red Bull, and although Lotus threatened to crash the party on occasion those three teams looked like sure bets for the future.

But Mercedes non-executive chairman Niki Lauda knew Hamilton was wavering. He could see that there was more than just a driver looking for a competitive seat, but also a human being seeking more freedom from what had been a somewhat restrictive environment in Woking. 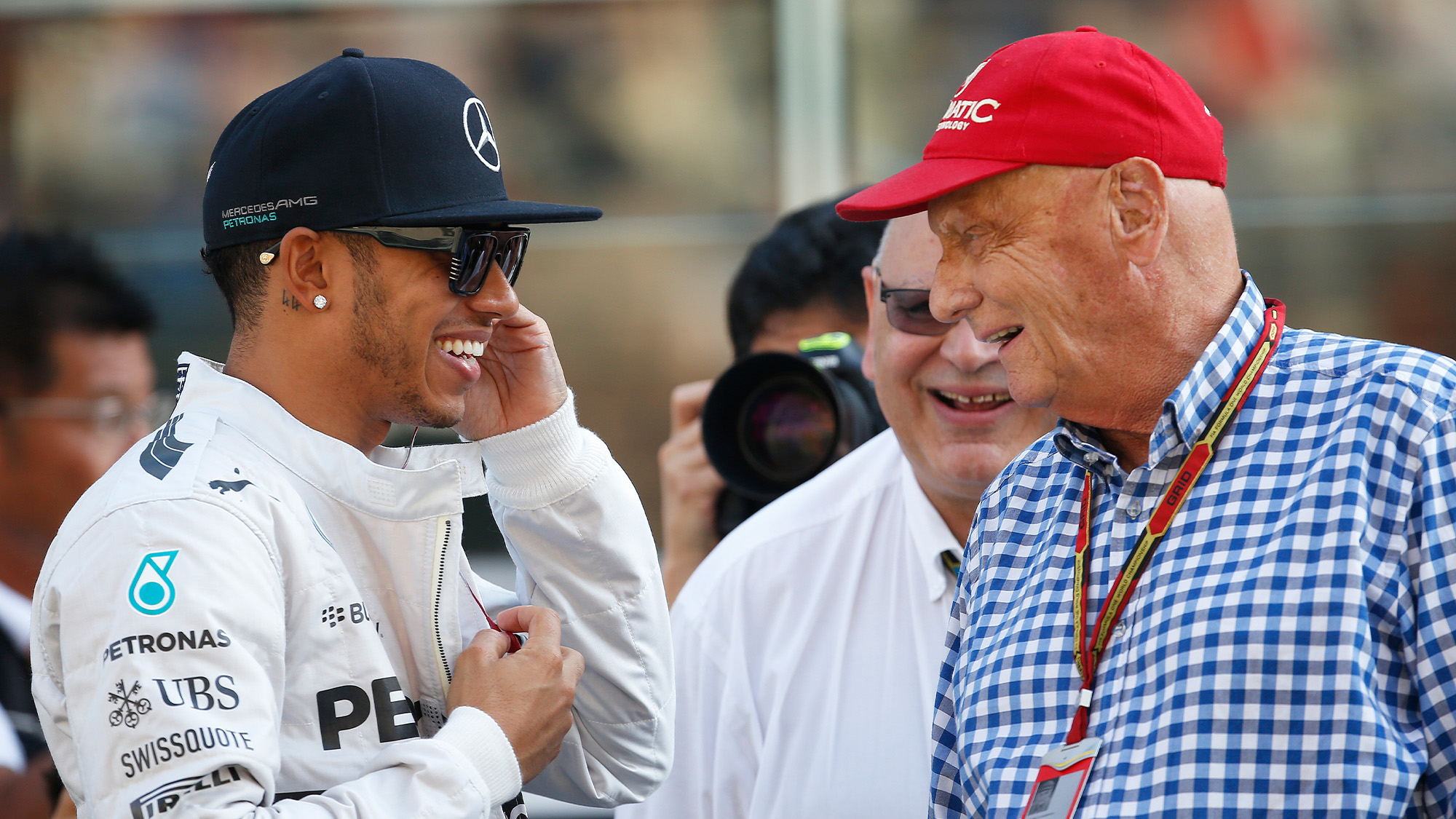 Niki Lauda was key in signing Lewis to Mercedes

“At the time it was one of the hardest decisions to make,” Hamilton admits when I ask him about that call. “I had been with McLaren and without them, and without their support along with Mercedes, I wouldn’t have made it to Formula 1 being that it is so expensive, so there was no way, as a family, that we had the sorts of money that some other families are able to throw at this sport.

“So, my loyalty was to them but at the time I had to think about what the future would hold and what I wanted to be a part of.”

It seems so easy looking back now, but when most commentators are honest and reflect on that exact moment in 2012, Hamilton appeared to be taking a big risk.

MPH: How Niki Lauda lured Lewis Hamilton to Mercedes - and their great friendship

In the next issue of the magazine you can catch up with Lewis Hamilton’s reflections on his season just gone. But one part that wasn’t included – and which he…

“Mercedes is a great partner of ours and they are a great team, but for anyone leaving McLaren, and he wants to win, I think that’s a mistake because I have faith and belief in this team,” McLaren team principal at the time Martin Whitmarsh said.

“Whether you measure it over the last four races, four years or 40 years, we’re a fantastic team. So I would say to any driver who wanted to win in this sport: ‘Come and join McLaren and aspire to join McLaren’. I wouldn’t advise anyone to leave McLaren if they want to win.”

“It is his decision, although I personally don’t think it is the right decision,” said Hamilton’s 2010-12 team-mate Jenson Button.

Those both had vested interests at McLaren, but the media were even more harsh: “A gamble”, “completely the wrong time to embark on such a project”, and “history relates that you do not leave a winning team in F1 unless it is to go to another proven winner…”

How wrong so many were. 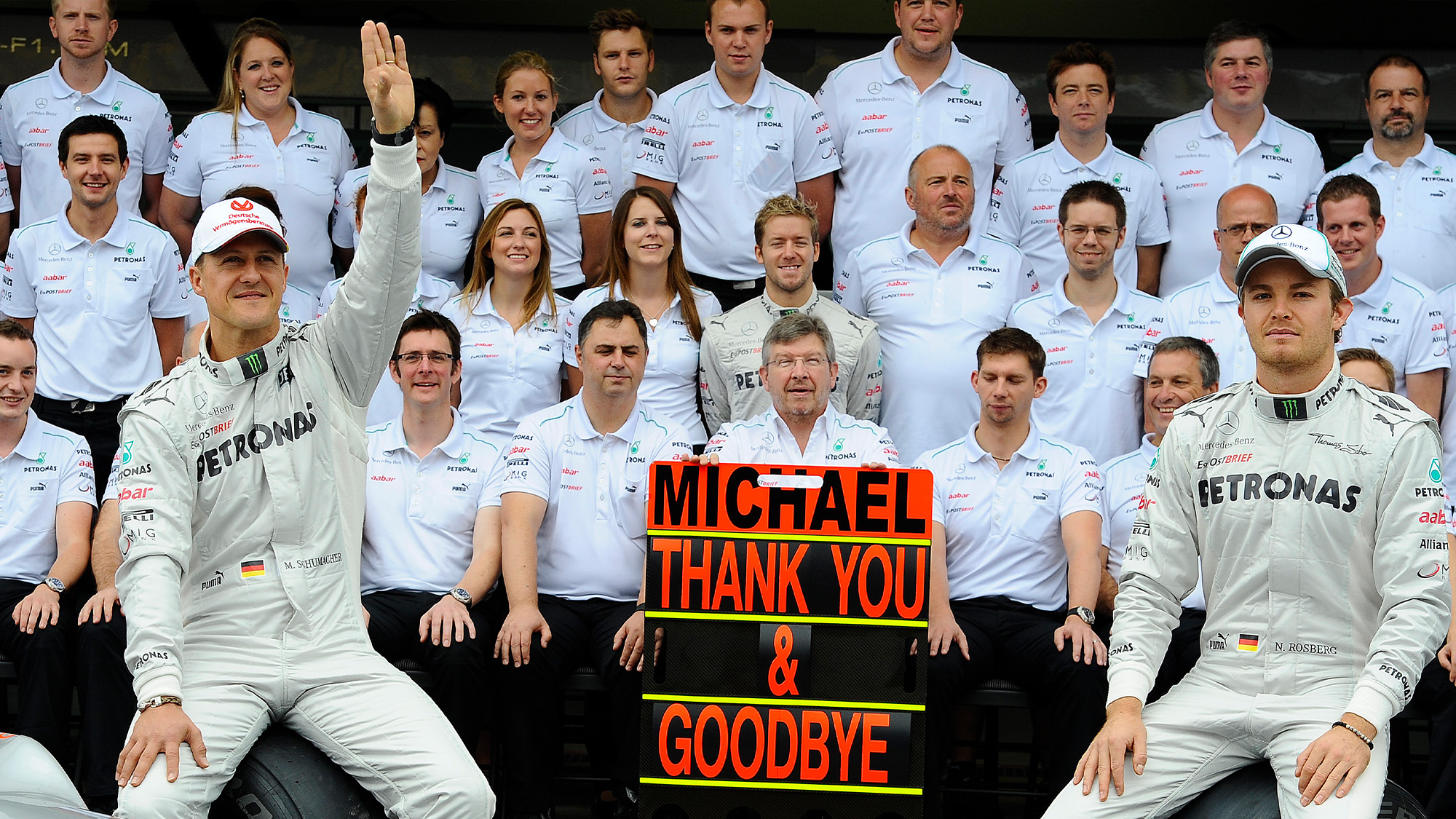 While commercial and financial aspects were serious considerations, when Hamilton came to make the decision, he reflected on what McLaren offered him from a sporting point of view. Since his maiden title in 2008, he had been handed machinery that rarely set the pace at the start of the season, but was often developed strongly. McLaren felt if it could deliver the quickest car out of the box, it would stay there, but 2012 offered that opportunity and the team fell behind.

The faith that he would have a car capable of winning another title at McLaren was fading, and – as simple as it sounds – Mercedes basically only needed the car. At the time, I wrote how Hamilton was the final piece in the jigsaw. The technical team was in place at Brackley, ready to exploit new technical regulations, but it was still early in its path to becoming a consistent front-runner. 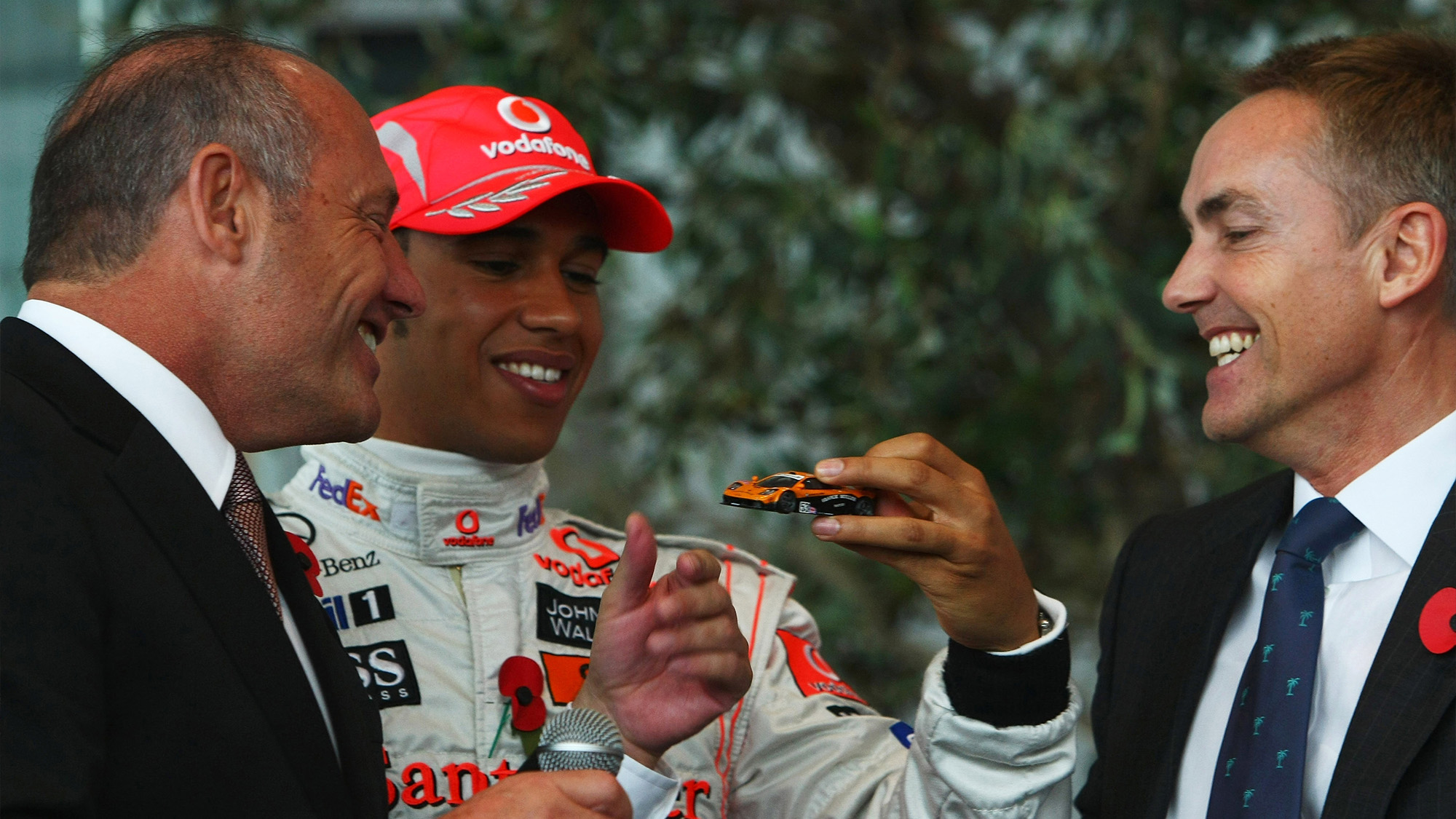 “I wanted to be a part of a team that perhaps hadn’t had as much success, was in the growing phase, and I wanted to be a part of that,” Hamilton recalls. “That growing journey. Building something relatively new. That was an exciting challenge and I didn’t know how long it was going to be until we got to winning ways. But I truly, truly believed that we would get there at some stage. 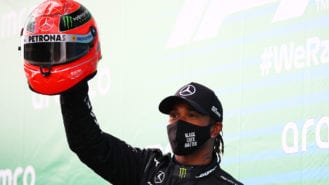 “Calling my boss, calling Martin in particular, was one of the hardest calls that I’ve ever had to make. I hope that he has forgiven me by now! I think so because he understands but ultimately I think it was the right decision.

“I knew it was the right decision for me personally and I think that is how life is generally, nobody can tell you what to do, only you will know personally what is right or wrong for yourself. You can’t have anyone else influence that decision. As long as you do your homework and you have got to do what is right for you and at the time that is what I did.” 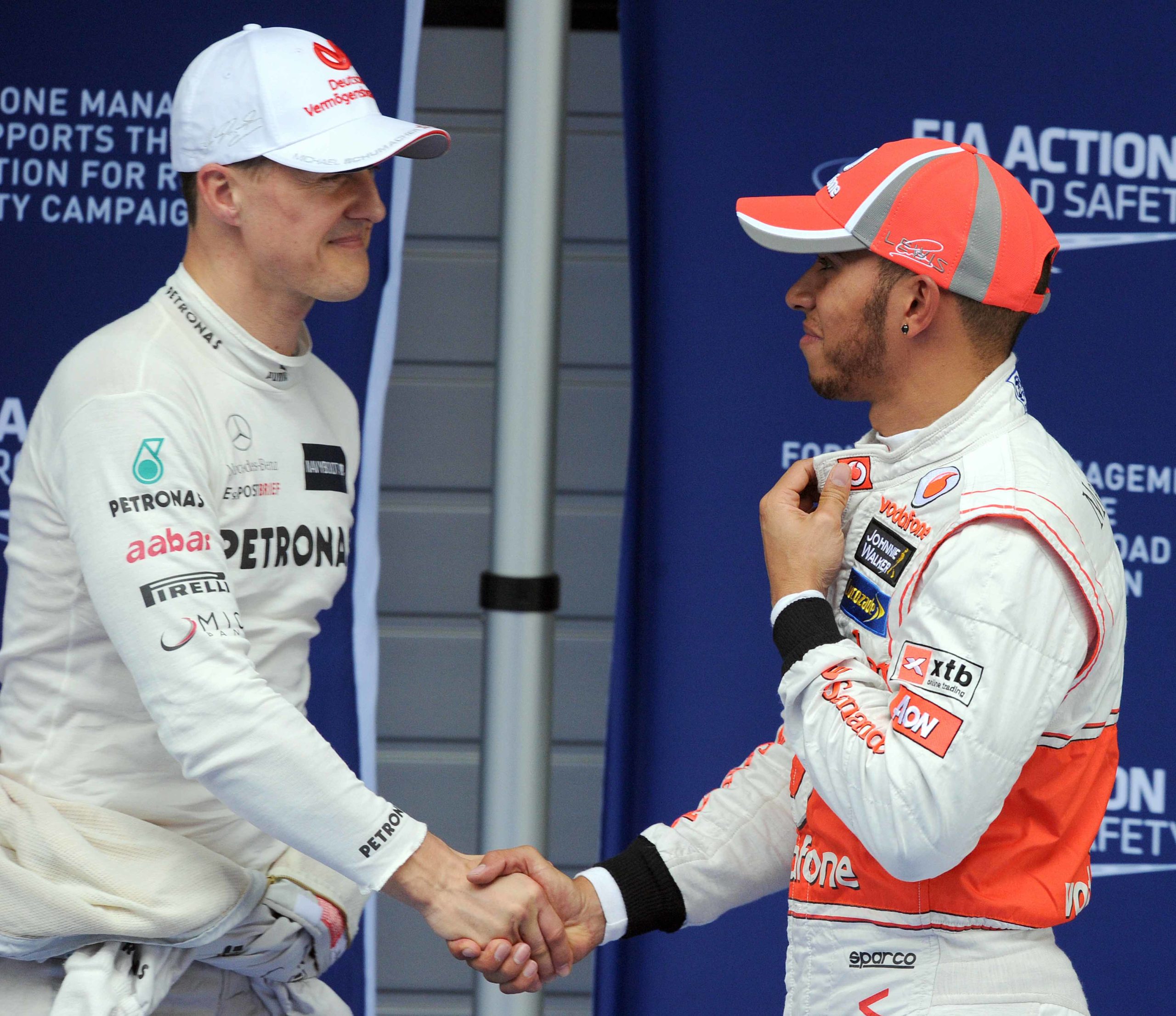 Hamilton and Schumacher in Shanghai in 2012