Can Lewis Hamilton finally log his historic 100th Grand Prix victory in Sochi after a wait of four races since his 99th success at Silverstone?

If he does pull it off today he’s going to have to fight for it, having qualified only fourth after not one but two uncharacteristic mistakes in the crucial closing minutes of a drying qualifying session on Saturday.

A victory in Russia will make up for the frustration that he’s experienced since the British GP back in July, when he survived a clash with Max Verstappen and overcame a penalty to win in front of his home crowd.

Like a nervous cricketer chasing a century he’s had to wait through a crazy race in Hungary (second after his late switch to slicks), the aborted event at Spa (third behind the safety car) and a fruitless chase of local hero Max Verstappen at Zandvoort (second again). Then came the clumsy crash with Verstappen at Monza after a bad start in the qualifying sprint put him on the back foot.

In Sochi on Saturday all seemed to be going Hamilton’s way as he sailed through Q1 and Q2 with the quickest times on intermediates. However when the rush to slicks came at the end of the session he first clipped the wall on the pit entry and then after taking a new nose spun and dinged his rear wing on his actual hot lap. Ultimately he was lucky to hold on to fourth with the time set earlier on the inters. 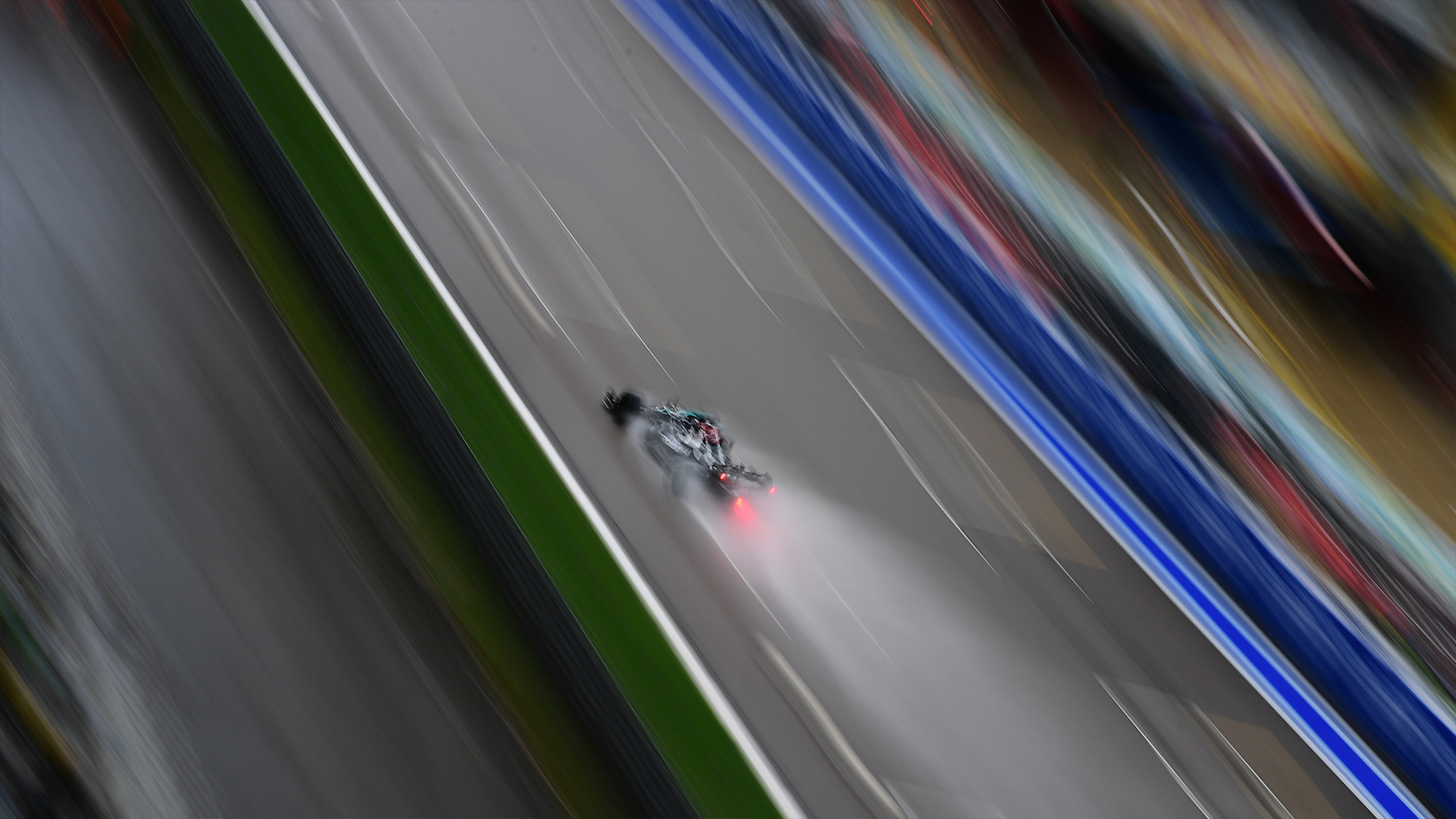 Hamilton topped Q1 and Q2 in Sochi, but was fourth in Q3

He could be forgiven for thinking that fate is conspiring to delay his progress to the magic 100 victories, but he denies any suggestion that outside forces at work.

“I’m just not superstitious, so I don’t believe so,” he smiled after qualifying. “It will come when it comes. But of course I’ll be giving it absolutely everything tomorrow chasing that number 100. It’s a big number. It seems like it’s taking longer than ever before to get it. But it’s a pretty cool number to wait for…”

Having had to time to review how the session had unfolded Hamilton was in an upbeat mood when he met with the media. After all, title rival Verstappen starts at the back after taking a new Honda power unit, so in theory Lewis should be able to get a good haul of points today.

From the outside it appeared that both Mercedes drivers had been too late with the call to switch to slicks at the end of Q3, as others jumped first and had the time to do two laps. Hamilton insisted that there were no regrets.

“It’s always a good time afterwards to reflect,” he said. “I think the management from the team was perfect, was spot-on. Of course you could say that we could come in earlier, but neither of us felt that it was worth the risk. Obviously the guys that were in sixth and seventh and eighth, it was easier for them to take a bigger risk. For us I wasn’t interested in doing so. 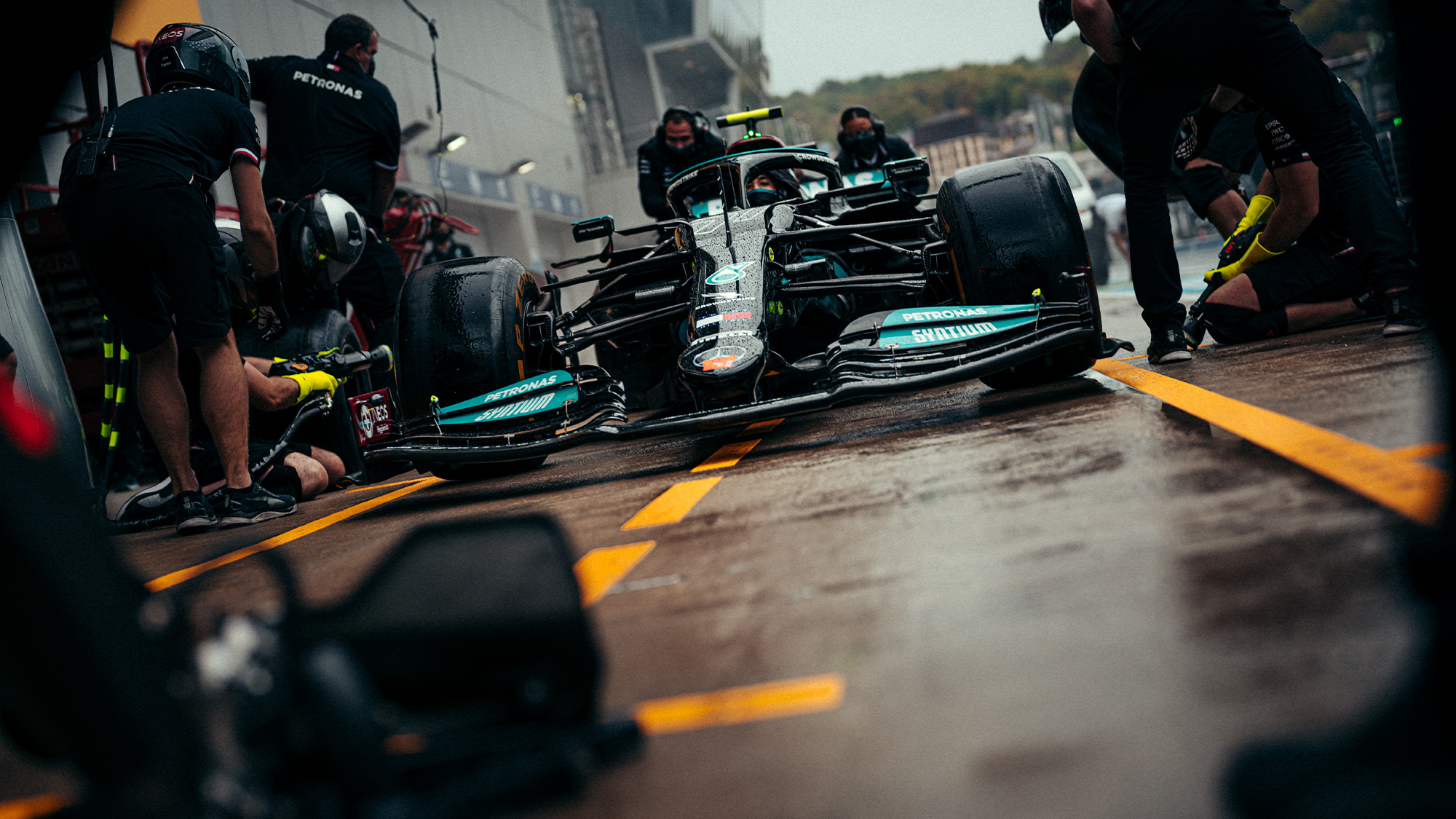 Pitstop practice: crew had their work cut out in Q3

“Obviously my performance, just sliding and touching the wall in the pit lane, it was frustrating, and I was most disappointed in myself. Because other than that, it was a really good qualifying session. Then they changed my tyres, and obviously had to change my wing, but had to let Valtteri go.

“So I was in the pit lane without blankets on for 64 seconds or something like that. So I lost a huge amount of temperature my tyres. The huge difference in temperatures between mine and Valtteri’s tyres makes a lot of sense for me, on my out lap and my final lap.

“And then just a bunch of things, like obviously we had to let people past, so we had to keep going off line onto the wet lines. I mean, it wasn’t ideal. And I’m just now putting all my energy towards tomorrow. I’m just hoping that the car is okay.

“Just looking at both of the incidents, the pitlane one, of course it wasn’t perfect, but relatively light touches. And the second one super, super light. So the second one is not an issue. And so far, they’re saying they think it’s okay, so they’ll do all the checks tonight. Obviously, the car is built to withhold a lot of force through all these corners. So those little taps hopefully haven’t derailed us.” 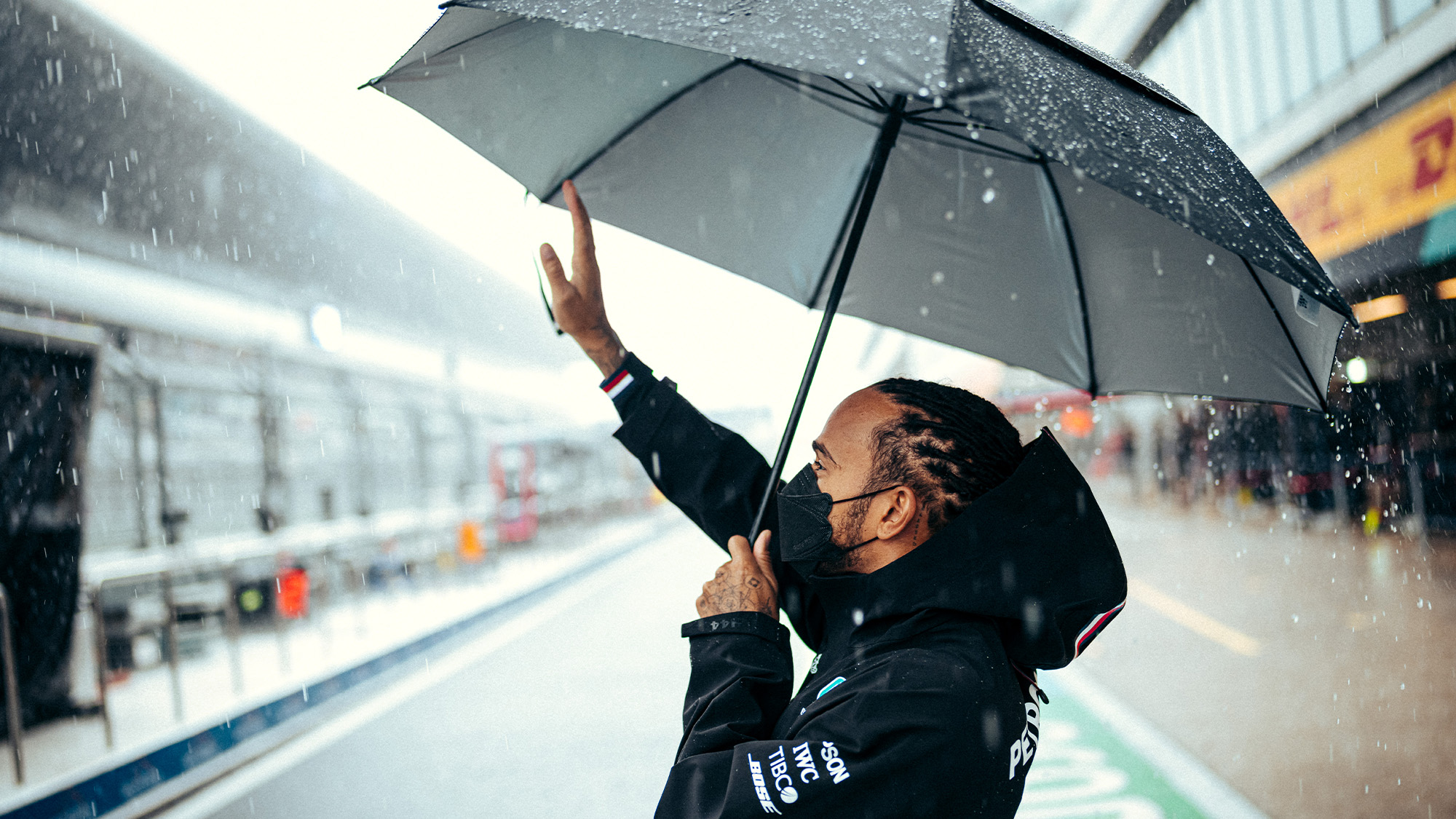 No pressure in the title race for Hamilton: Verstappen says it’s the same for him

It’s easy to suggest that Hamilton is under pressure in the World Championship race, and that such mistakes result from that sense of urgency. He denies that’s the case.

“It’s really nothing to do with pressure, honestly,” he said. “It really wasn’t a pressure scenario. It’s literally just mistakes do happen. Basically I came into the pits, I knew that I didn’t have a huge amount of time. And I was attacking, I was just trying to get through the pit lane as quick as possible, because I knew that I was gonna need as much time on track as possible.

“In the previous laps, previous times coming in the pitlane, we could take it really quite slowly. I thought the track was drying and the grip was quite good, and came in and just took it a little bit quicker than normal, and just lost the back end, and just slid into the wall. So yes, of course embarrassing, disappointed in myself, but shit happens. We all make mistakes.

“And of course, it’s not what you would expect a World Champion to do. But the problem when you have the successes that I have, anything but perfection, it feels like a long way off. But I’m only human. My dad called me afterwards, we just talked about it, and you just move on. Tomorrow I’ll get my racing head back on, back focused, and hopefully bring a good race.” 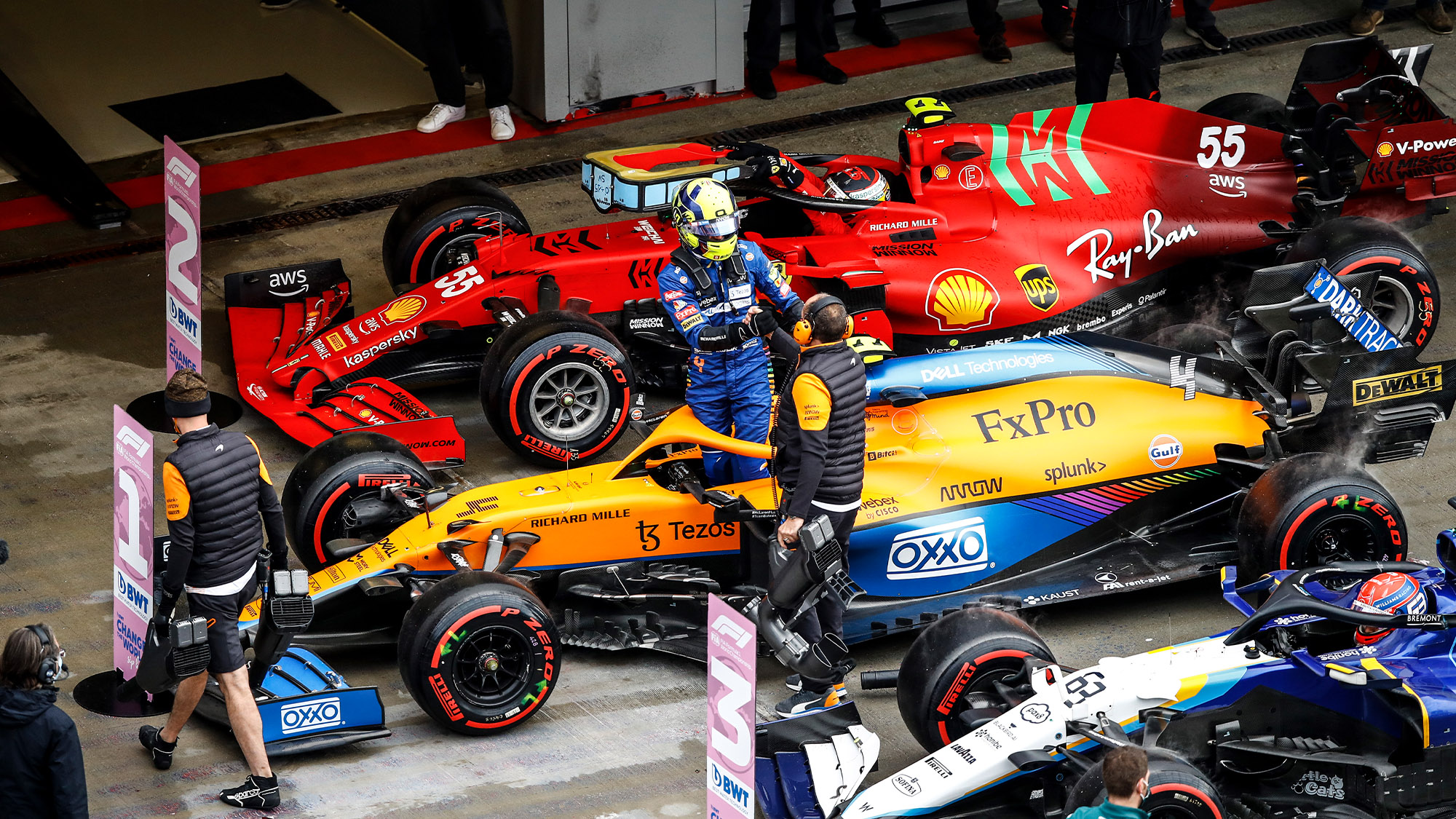 It will be fascinating to see how the start and first lap unfold. The guys ahead of Hamilton, Lando Norris, Carlos Sainz and George Russell, all have much to gain and nothing to lose – although the last named is well aware that contact with his future team mate won’t go down too well. The bottom line is that Hamilton will just have to go for it.

“I’m fighting for a championship, I’m chasing a championship, and I’m in a slightly different position to the people around me. But that doesn’t mean I won’t be racing hard. There’s just a balance that you have to try and have. In the past I have been relatively good I think with that balance of risk, so I should be okay.”

On paper Sochi should have been an easy one-two for Mercedes, as indeed was the case with Monza – that’s certainly how Red Bull Racing boss Christian Horner sees it. Having failed to take advantage in Italy it’s logical to assume that Mercedes and Hamilton have to do so today, especially with Verstappen at the back. However Lewis insists that the team doesn’t see it that way. 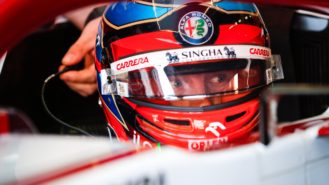 “Well, we can talk about it and just apply pressure to ourselves. I mean, of course if you could capitalise on on any opportunity you have, it can make a big difference.

“But what you’re seeing is with the rule changes that it’s been difficult for everyone with engines. I’m sure this weekend it’s been interesting seeing some of the movement [ie Verstappen’s PU change]. Who knows what the hell its gonna be up ahead of us all?

“We just have to focus on now, try to maximise tomorrow as a team. If you look, Valtteri’s come from far behind here I believe. You saw him come from last to third in the last race. So it’s not impossible for those at the back to come and get some good points.”

Power units have become a big issue as the last part of the season approaches. This is a long season with a limit of three per driver, and the manufacturers are pushing the limits in terms of reliability while also (within the rules) cracking on with developments for next year. Added to that some big names have lost engines in crashes, notably Verstappen at Silverstone – hence his early switch to a fourth example. 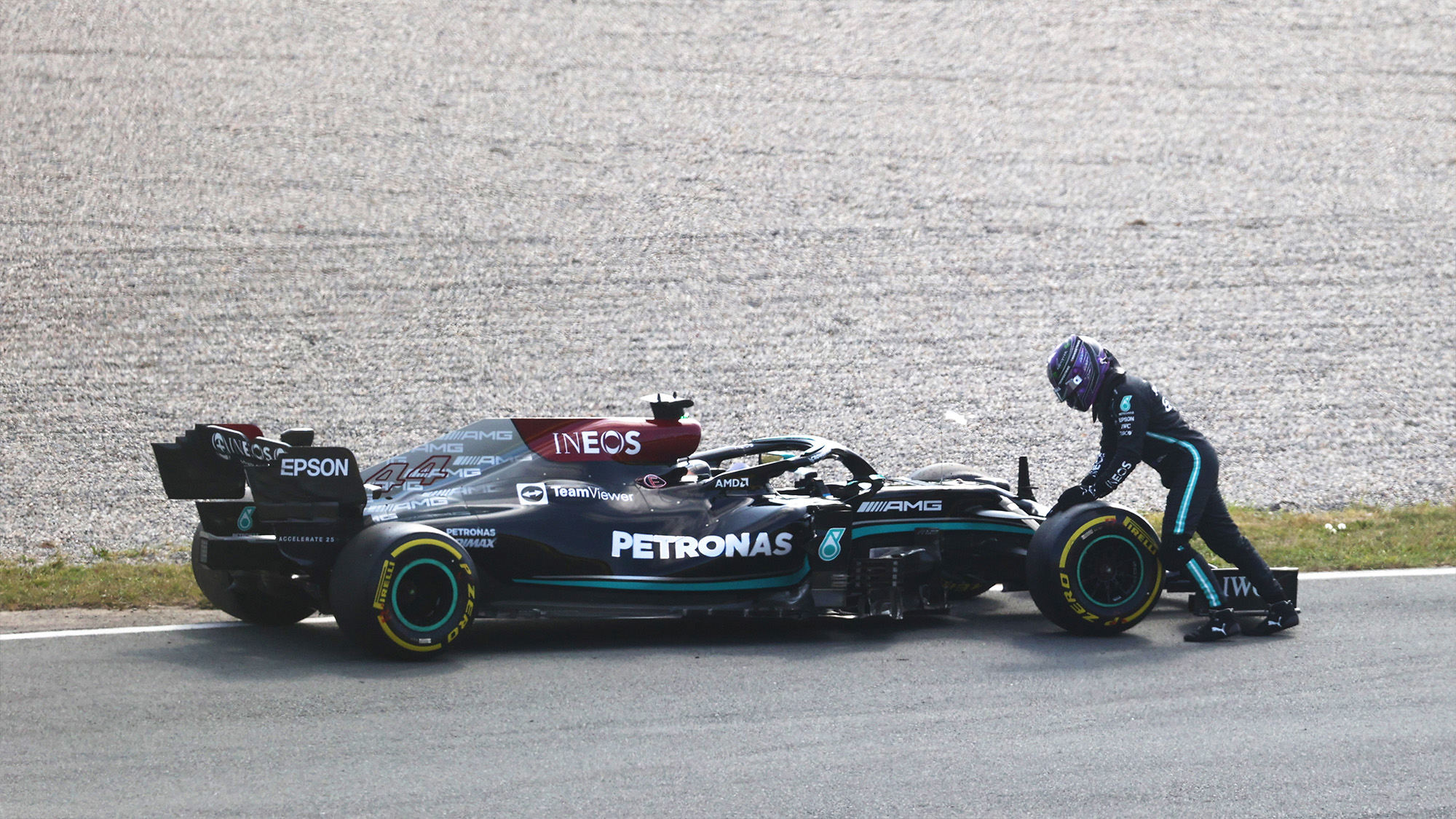 Hamilton is one (old) engine down after Zandvoort failure

Hamilton had a failure in practice at Zandvoort, but it was his oldest unit, one that had done a lot of race miles and was consigned to Friday use. With seven races to come after this weekend a change to a fourth example seems inevitable now, especially as Mercedes has experienced some issues, and there are even suggestions that Lewis will take it here.

“In terms of engines, I have absolutely no idea. Of course I’ve lost one engine, Valtteri’s had several. And there’s been others that Mercedes have seen up and down the paddock. So right now my I’m trying to treat my engines, the ones that we put in, with the absolute care when I’m driving, in terms of how much I’m gassing it, how much I’m revving the thing, revving the nuts off it, just really trying to minimise the laps that I do.

“But who knows? I can’t control the future. All I can do is try to maximise when I have the opportunity, and there’s been two [mistakes] particularly, in the last race, in the sprint race at the start, and then today.

“Just speaking to the team, they said that even if we didn’t have that pitstop scenario, we wouldn’t have had two laps, and ultimately you needed two laps to get the temperatures in the tyres. So it is what it is, and we’ll regroup. We’ve got great pace this weekend, so I’m still positive for tomorrow.”

So what can Hamilton do in the race? Sochi is possibly the least useful pole position of the season, as the long run down to Turn 2 encourages cars behind to tow past, and third is seen as a good spot. Hamilton is fourth, on the dirtier side of the grid, but he might be able to make good progress.

“I think that P4 is maybe not the worst of starting positions for Lewis with a quick car in a straight line,” said his boss Toto Wolff when I asked.

“And the tow is worth a lot. And probably the best position to start from is P3, we’ve seen that last year and in the years before. So P4 is not a catastrophe. On the contrary, it may even give opportunities…”