Williams was first on track in the first test session of the 2020 F1 season this morning, drawing a line underneath 2019, when it missed the first two days of testing.

George Russell was soon followed by cars from all ten teams, as drivers began their test programmes in preparation for the first race in Melbourne on March 15.

“I think we had an intense morning planned and to get everything in, it was important to get out from the beginning but also, off the back of last year, I guess it was psychologically important for all of us, everyone who’s worked day and night back at the factory to see their car out first from the struggles of last year, it was incredibly tough,” said Russell.

“Seven hundred-odd people working back at Grove, they’re working absolutely flat out to try and make things ready and working double time. So now it’s a relief for all and get cracking on with all of our test programme.”

Earlier in the day, the last of this year’s cars were revealed, as Renault unveiled a full car for the first time, in a dark test livery; the full 2020-spec Racing Point was shown and Alfa Romeo displayed its barely-changed new-season paintwork.

The drivers also took part in a pre-season video shoot, walking down the start/finish straight before the session began.

On track, there was little drama as teams began their varied test programmes, several cars laden with air pressure sensors.

At Ferrari, Charles Leclerc took the place of Sebastian Vettel, who was due to be in the car today, but was feeling unwell. 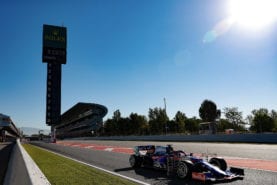 The timesheets currently give few clues to the competitive order, but you can read Mark Hughes’ guide on how to interpret the available information. Click to see what conclusions you can draw from these early days of the season.

You can also avoid driver confusion by catching up on the widespread helmet changes this season.

View the latest testing pictures in the gallery above. We’ll be bringing further analysis of the sessions as testing continues