Names such as Lella Lombardi, Maria Teresa de Filipis, and Michèle Mouton rightly stand out as pioneering female figures in motor sport, but before them there was one trailblazing driver whose career packed in more than most could hope to in several lifetimes: Hellé Nice.

She led a breathless early life as a socialite, dancer, model and downhill skier, then began a groundbreaking racing adventure in the 1920s and ’30s, before suggestions of Nazi collusion by Louis Chiron led to her dying alone and impoverished in 1984. Now, a crowdfunding campaign has been set up to shine a light on her incredible life in a 144-page book, illustrated with never-before seen images from a recently discovered suitcase.

She then made a natural transition from poster to the stage, and her earnings from performing allowed to buy her first car, a Citröen. Moving in the thrill-seeking circles of Paris led to a friendship with racing driver Henri de Courcelles, who first introduced her to motor racing.

Always in search of the next adrenalin rush, she first took up downhill skiing, but was forced to stop after injuring a knee whilst escaping an avalanche.

With careers in skiing and dancing now off the cards, she turned her attention fully to racing, managing to enter the all-female Journée Féminine weekend of racing at Montlhéry. She finished 15th in the championship race, as well as winning a five-car ‘Grand Prix féminin’ event at the wheel of an Oméga-Six.

What resulted was a factory driver role with Bugatti – following in the footsteps of her spiritual racing predecessor, Eliška Junková. At the wheel of the French car, Hellé Nice won the Actors Cup, one of the prizes being a sponsorship deal with Lucky Strike, of which she became the new face. In a short period of time, her fame in France skyrocketed.

In December 1929 she returned to Montlhéry to set a woman’s unofficial land speed record of 197.7km/h (122.8mph). This then led to her running dirt tracks in the US as a factory driver for Miller, another sponsorship deal with Esso and a new moniker: ‘The Bugatti Queen’.

Her fame at an all-time high, Hellé Nice made her way back to Europe in 1931 to compete in grands prix.

She acquitted herself well, racing against prewar legends like Louis Chiron, René Dreyfus and Philipe Étancelin, moving over to Alfa Romeo in 1933.

In an era as perilous as it was glamorous and romantic, the Frenchwoman suffered a career-defining crash in 1936 whilst competing in Brazil.

Whilst running third on the final lap of the Sao Paolo Grand Prix, Hellé Nice crashed into the crowd, killing six people. Thrown from her somersaulting car, Nice’s fall was broken by a hapless solider working at the event.

Hellé Nice was already a hero in Brazil, a status only reinforced when she awoke from the coma sustained by the impact after three days. She had been shown in newspapers laid out with the deceased from the crash, making her recovery appear all the more miraculous.

The Frenchwoman would make her racing return in 1937, breaking ten records in the Yacco endurance trials at Montlhéry, but doubts about her health after that huge crash meant sponsors and factory drives were thin on the ground.

The advent of WWII brought down the curtain on racing, and Hellé Nice managed to see out a relatively untroubled life in Nice whilst the fighting raged on. 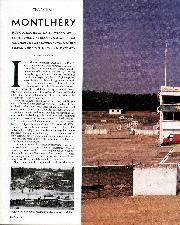 It was what the French call 'Un ete de la Saint-Martin"— an Indian Summer. Across continental Europe the weather had been hot, oppressive. During our night time run into France…

This led to suspicions about her relationship with the Axis forces, a rumour promulgated by Chiron on the eve of her planned motor sport comeback at the 1949 Monte Carlo Rally; the grand prix legend insinuated she might be a Gestapo spy.

Now estranged from her sponsors and family, the riches of Hellé Nice’s formerly glamorous life ebbed away.

Falling into poverty, she eventually ended up moving into an attic room in Nice, and was seen by neighbours taking milk from neighbours’ cat saucers in a bid to stave off starvation. She died alone in 1984.

Her exploits featured in newspapers and magazines of the time, but Hellé Nice is rarely mentioned among racing’s pioneers. Roaring: The Dramatic Journey of Helle Nice, is designed to remedy that, with newly-commissioned illustrations, archive news pieces, and rediscovered pictures.

The book, to be published by Red Runner in English and French, needs 500 pre-sales to make print. The crowdfunding campaign is currently around two-thirds of the way to its target.

Roaring: The Dramatic Journey of Hellé Nice is the story of one pre-war racing’s most glamorous and mysterious racers. From her early beginnings as a model and dancer, to racing exploits and then sorrowful fall from grace, this book should illuminate a lesser-known character from racing history.