If Lewis Hamilton wins in Spain and Mercedes-Benz team-mate Nico Rosberg finishes second (again), the Englishman will assume a three-point lead in the standings.

And it will be done and dusted. 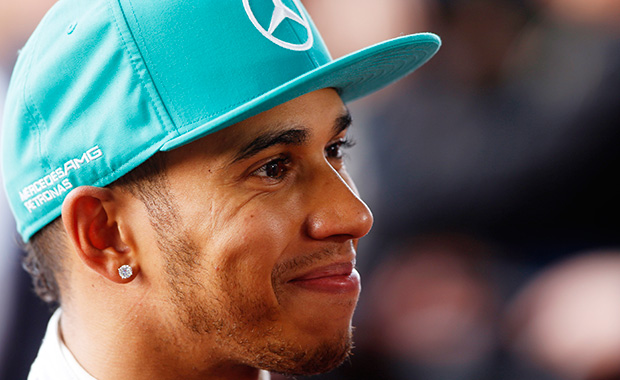 At least that’s what the statistics strongly suggest: win four or more Grands Prix in succession in a single season and you will be that year’s World Champion.

There have been occasions, too, when a bog-standard hat trick was sufficient: witness Messrs Stewart (twice), Vettel (albeit two in one season either side of half-time), Hill, D, Lauda and Fangio.

And there have been occasions when it wasn’t: Hill, D (twice), Schumacher, Mansell, Prost and Senna.

Jones loses out to Ferrari

That was a strange, lopsided season. Drivers were allowed to count their four best scores from each half of it – but the cancellation of the Swedish GP in the aftermath of the deaths of Ronnie Peterson and Gunnar Nilsson caused the second half to be more (or less, I can’t decide) equal than the first.

The odd ‘first half’ was won by the Ferraris of Jody Scheckter and Gilles Villeneuve, as Jones made do with the old Williams FW06 before switching in Spain, round five, to 07.

The latter, though clearly superior, suffered teething problems: a gearbox drama at Jarama (after a pitstop because of a puncture) and an electrical glitch, while leading, at Zolder.

At Monaco, the pressure of driving a potential race-winner perhaps got to the usually phlegmatic Jones. He crashed after a frustrating but minor delay in qualifying – a mistake that left him ninth on the grid – and during the race bent his steering and suspension against the barrier at Tabac.

He was harrying the leading Ferraris at the time but probably wouldn’t have finished in any case, for his gearbox was losing oil.

His total at ‘half-time’, therefore, was a meagre four points – 16 fewer than Villeneuve, in third behind Ligier’s Jacques Laffite, and a whopping 26 (net) behind Scheckter.

The internecine battle at the Scuderia was fascinating. Newcomer Scheckter was ostensibly the number one, but Villeneuve had beaten him twice in succession – at Kyalami and Long Beach – upon the arrival of the 312 T4.

Scheckter simply had to win in Belgium.

Jones’ misfortune there was telling. Had he won, he would have been able to add 13 points to the full house – 36 (net) – that he garnered in the second, even, ‘half’. And that would have given him the title by a point, from Scheckter, with Villeneuve a further point in arrears.

That is despite both Ferrari men having scored more points (gross).

It could, though, have caused further twists.

The determined Scheckter might have lost more than three points had he finished second in Belgium, for Villeneuve’s momentum and status within the team and at Maranello – Enzo was enthralled by him – might have proved unstoppable thereafter.

Villeneuve finished out of the points in Belgium yet was the star of the show, having recovered from an early pitstop caused by collision damage to be third with less than a lap to go when he ran out of fuel.

Four GPs in a row

Scheckter was mighty in victory at Monaco – particularly in pipping Villeneuve to pole – but then that victory in Belgium had given him vital breathing space, confidence and momentum.

Without it, who knows?

He had earned Villeneuve’s respect, but would Gilles have been as content to play the dutiful number two in the 1-2 at Monza that saw Scheckter crowned?

Probably yes – he was that kind of guy.

Had Villeneuve dived by in front of the tifosi, he would have been the world champion, with or without a Jones victory in Belgium.

Or maybe Scheckter would have been compelled to usher his team-mate to the title in the face of a stronger challenge from Jones.

Back in the real 1979, Jones was running away with the British GP when his water pump’s casing cracked. If it smarted that Clay Regazzoni scored Williams’ maiden GP win that July day, the tough Aussie didn’t let it show.

And then his dam burst – and the luck, as so often it can for a man suddenly in winning form, ran in parallel with his skill.

At Hockenheim a fortnight later, he nursed a deflating rear tyre for 10 laps to the finish. In Austria, he missed a shift and lost a wheel weight. And at Zandvoort, he battled a reluctant third gear and a relentless Villeneuve until the latter spun because of a puncture and added to his legend by flailing back to the pits.

Jones’s first GP win had come as a surprise at a damp Ӧsterreichring in 1977. Thus he twanged that old saw: hissecond win was his hardest.

He won in Canada, too. Four wins from five.

And in Argentina the following year. Five from seven.

In fact, he became a streak driver: eight of his 12 GP wins were scored back-to-back.

Making up for lost time

For Jack Brabham, it was nine of 14 (albeit with a six-year gap between his batches of five and four.)

It’s intriguing that they all arrived late in F1 after long, circuitous slogs and scored those first wins beyond their 30th birthdays. Time was against them.

The same cannot be said of Hamilton, who arrived as if to the manor born at just turned 22 after fastidious grooming by McLaren.

However, he has seen the years and titles slip by since those halcyon days. There were occasions, indeed, when he looked sickened by the process.

Yet he has emerged a more rounded driver and is clearly relishing his current run of success. Happier, more relaxed and fresh-faced, smoother, smarter and faster, he is harvesting while the sun shines.

It will be interesting to see if Sebastian Vettel can achieve the same. For those nine wins of 2013 have lost their bounce.

The Spanish GP will see the top teams unveil a host of updates and, as such, it’s likely to be Red Bull and Renault’s last chance to spoil Hamilton’s season.

Ditto for Rosberg – according to the statistics.

Oh, hang on, I forgot, there’s another oddball, uneven scoring system to factor in.