The heat of Hungary delivered a commanding victory for a chilled Lewis Hamilton. He spoke of being “mellow” and in a “different headspace”: distracted almost and yet somehow totally focused on the job. Here was the driver that his handlers, Mercedes-Benz – and McLaren – so craved: the fastest, most marketable on the grid striking the perfect balance between aptitude, attitude and fortitude. All the ’tudes, dude. He smoothed his hair a couple of times during a TV interview but in truth appeared unruffled after his coolest victory to date. 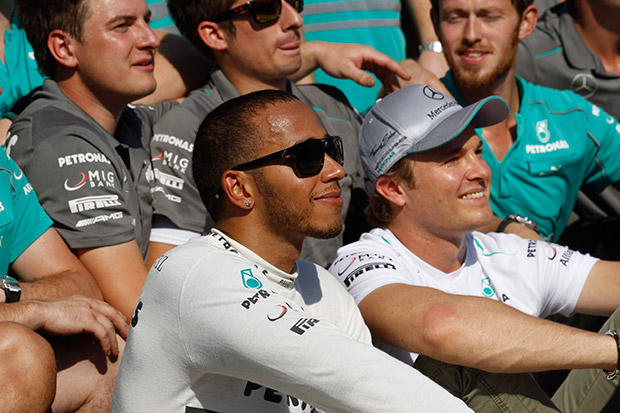 He wasn’t the first Mercedes-Benz driver to sunbathe in glory, however.

The 1955 Argentinean Grand Prix was hotter still: 40deg C. According to Fangio, in his 1961 ghosted autobiography: “In the searing heat, the shape of the Autodrome itself dissolved, trembling and vibrating under the blinding sun shining pitilessly in a sky the colour of fused lead.” Wow.

Drivers roasted from without by the pampero – the hot wind gusting from the pampas – and from within by engine heat percolating through their cockpits, wilted left, right and centre. Three of the cars that finished in the top six required three drivers to complete the distance. One required two. Even bull-strong Froilán González suffered sunstroke. Two, however, were driven singly: by Fangio and compatriot Roberto Mieres. 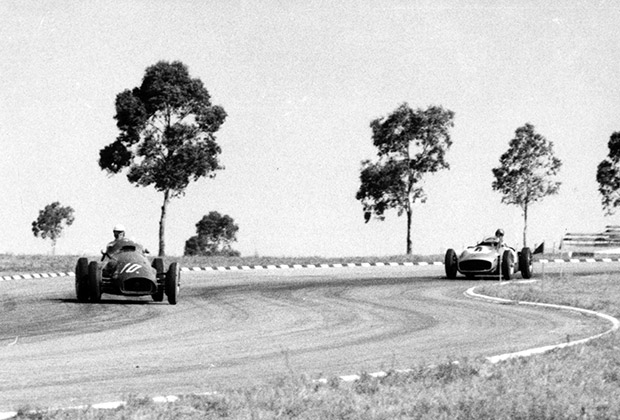 The latter, an all-round sportsman of note, finished fifth in a Maserati 250F. The former, whose (tubby) fitness derived from his experience of the long-distance, cross-country Turismo Carretera races in cut-and-shut Chevys, won in a W196.

Fangio acknowledged the benefits of acclimatisation and felt sorry for the drivers from “The Old World” who had arrived direct from a Europe in the grip of a harsh winter. He did not, however, expound the benefits of hydration. In contrast to modern practice, he reduced his liquid intake in preparation so that he could complete the three-hour race without a drink. When handed a cup of water during a pit stop he poured it over himself before resuming, sat up to his waist in an imaginary snowdrift. He was harnessing the power of the mind as well the body.

Four years later that most relaxed of drivers, Tony Brooks, won a torrid French GP. The cornfields surrounding the shade-less Reims circuit shimmer for a reason above and beyond their colour. The whippet-quick Englishman, piqued by suggestions (made despite his victories in long-distance sportscar races) that his willowy frame indicated a lack of stamina, appeared to sail serenely on. Ferrari had thoughtfully fitted a flask of reviving liquid in his cockpit. By the time the pole-sitter and race leader remembered its presence, however, the orange juice contained was scalding. The reviving cups of tea he drank after the finish were much more his, er, cup of tea. 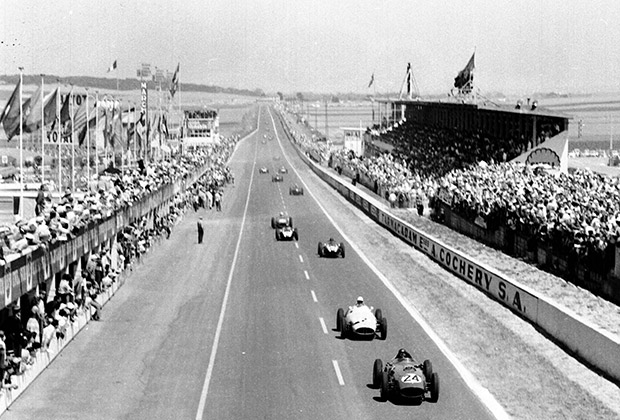 There is a telling photograph of Bruce McLaren from the race’s immediate aftermath. The New Zealander, then still 21, has just finished fifth in his first GP in a Formula 1 car. He is slumped in the Cooper’s cockpit and has a faraway look in his eye and a drained bottle of pop in his hand. His is the face of war not sport. McLaren’s team leader Jack Brabham finished a careworn third, his nose-cone pocked by shrapnel of loosened stone and molten tar and his Perspex windscreen smashed by his own hand to let more (superheated) air into the cockpit. And Masten Gregory, the third works Cooper driver – and the most fearless man Brabham ever met – retired because of gashes to his face.

Stirling Moss, meanwhile, spun his clutch-less BRM in the goo at Thillois hairpin and rendered himself senseless in a vain bid to push-start it. (He recovered sufficiently to win the Formula 2 support race in Rob Walker’s Cooper-Borgward.)

Reims dished up more of the same two years later. It is often forgotten that newcomer Giancarlo Baghetti battled the conditions as well as his rivals and inexperience to win on his GP debut. Some drivers sucked rags to wet their mouths and protect their faces from the grapeshot retro-fired by the cars ahead. Others slowed at Thillois to slurp water or have it thrown over them. Baghetti, who kept his ‘cool’ throughout, had to be hauled semi-comatose from the cockpit of his semi-works ‘Sharknose’ Ferrari and be doused head to foot before fully recovering his composure. He had earned his immortality in his day in the sun. 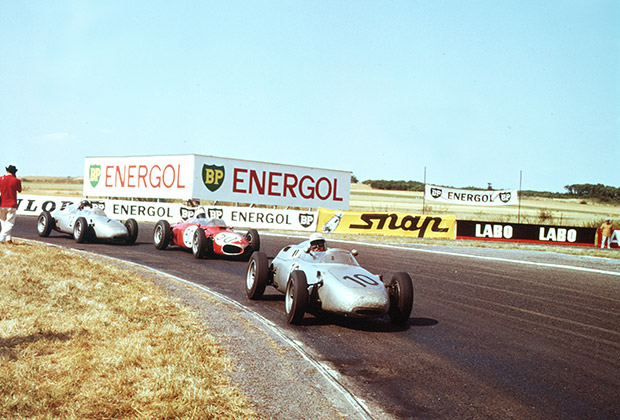 It was the crowd that lost its rag at Brands Hatch in July 1976. Although the heat wave that had grilled the country for almost a month officially broke on the first day of practice, there were still sufficient BTUs radiating to have the James Hunt followers baying for blood when it became (un)known that their horn-playing hero might be denied his moment because of a footling technicality. Their behaviour, like the weather, was distinctly un-British.

You’d have thought, however, that Brazil’s Nelson Piquet would have been in his heated element. Not so. Hardly the fittest of his peers, he secured his first world title while in a stupor, lolling in his Brabham, having vomited inside his crash helmet. He wasn’t helped by the circuit’s anti-clockwise nature – he was in agony with a cramping neck – nor by its situation in a baked Nevada car park, its tortuous route picked out by reflective white concrete barriers. Fifteen minutes passed before he felt well enough to attend the podium, where he was greeted by beer-chugging race winner Alan Jones. No worries, mate. 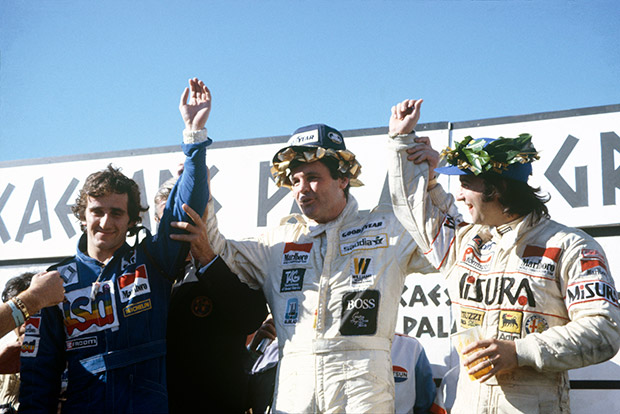 At the 1982 Brazilian GP, an exhausted Piquet collapsed on the podium – even before news broke that his victory would be annulled because of his Brabham’s alleged water-cooled brakes. He should have taken a leaf from Keke Rosberg’s book. The Finn, who helped steady a tottering Piquet in Rio – and later lost his second place for the same infringement as Nelson – won two of the hottest GPs on record.

Water-cooled skullcaps were the order of the day in Dallas in 1984. Nigel Mansell led for Lotus on a Fair Park circuit crumbling to dust in 38ºC heat but would end the race in a foetal heap alongside his car after attempting to push it across the finish line – albeit not before the Osella of Piercarlo Ghinzani whizzed by for the only two points of his GP career. Rosberg, in contrast, was the epitome of cool in his hot-tempered Williams-Honda.

This combo had fully got their act together by the time of Rosberg’s victory in the 1985 Australian GP – his last for the team before switching to McLaren. Having elected to fit old-fashioned cast-iron brake discs rather than carbon items because of their longevity in the heat, he even had time for three pit stops for fresh rubber before taking the chequered flag. Oh, those icy Finns and their saunas. 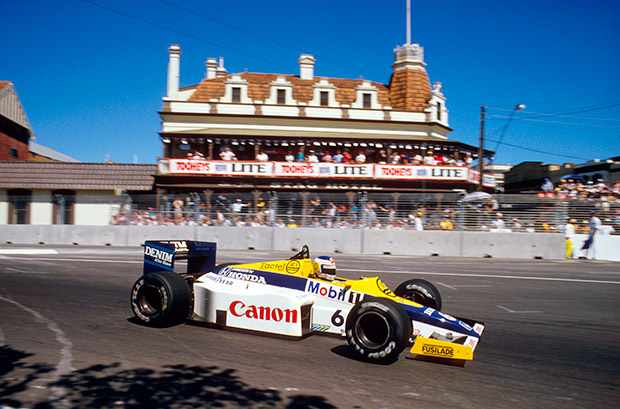 Nobody, though, has been cooler (though not in the hip sense) after a scorcher than Michael Schumacher. Nary a worthy hair out of place, nary a bead of sweat, and plenty of energy left for a celebratory leap. It was the car that let him down in the sweltering Bahraini desert of 2005 – another 40deg C affair – hydraulic failure resulting in his first mechanical retirement since Germany 2001.

If Mercedes-Benz can match that astounding Ferrari reliability perhaps Hamilton can yet tilt at the title. Ayrton Senna is his hero he loves to emulate, but he has never driven more like Schumacher than he did on Sunday. A blend of the two wouldn’t do him any harm.

PS There is a photograph of two-time Indy 500 winner Bill Vukovich that for me epitomises the heat of battle. The ‘Mad Russian’ is sat, grubby bare feet raised, on a workbench in Gasoline Alley. He is grabbing a moment’s peace and shade. His oil-stained right hand shields his burning eyes while supporting his weary head. Covered in sweat and grime, he looks like a hobo rather the winner of the biggest auto race of 1954 – itself a round of the World Championship. He had spent most of the previous four hot and humid hours battling the only driver as tough as he: ox-strong cowboy Jimmy Bryan of Phoenix. Hey, you should see the other fella! 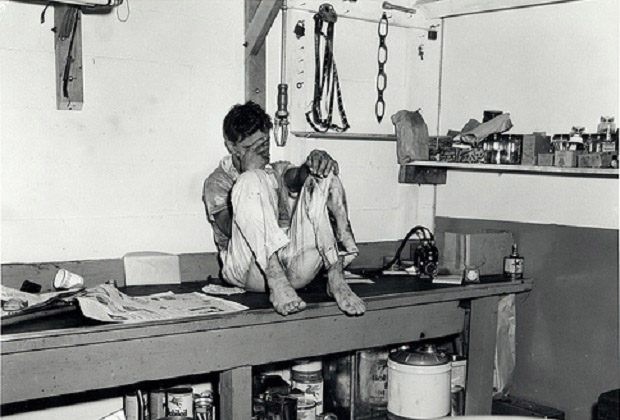 And yet 1953 was the truly hot 500: several cars were shared by three drivers; Chuck Stevenson and Andy Linden drove three apiece; Gene Hartley crashed two different; and Carl Scarborough collapsed and died of heat exhaustion after finishing 12th. Vukovich, travelling alone, won that one, too. Asked about the conditions, this son of a poor Slavic immigrant farm worker, who died during the Great Depression, responded; “You think this is hot? You ought to try driving a tractor in Fresno in July!”