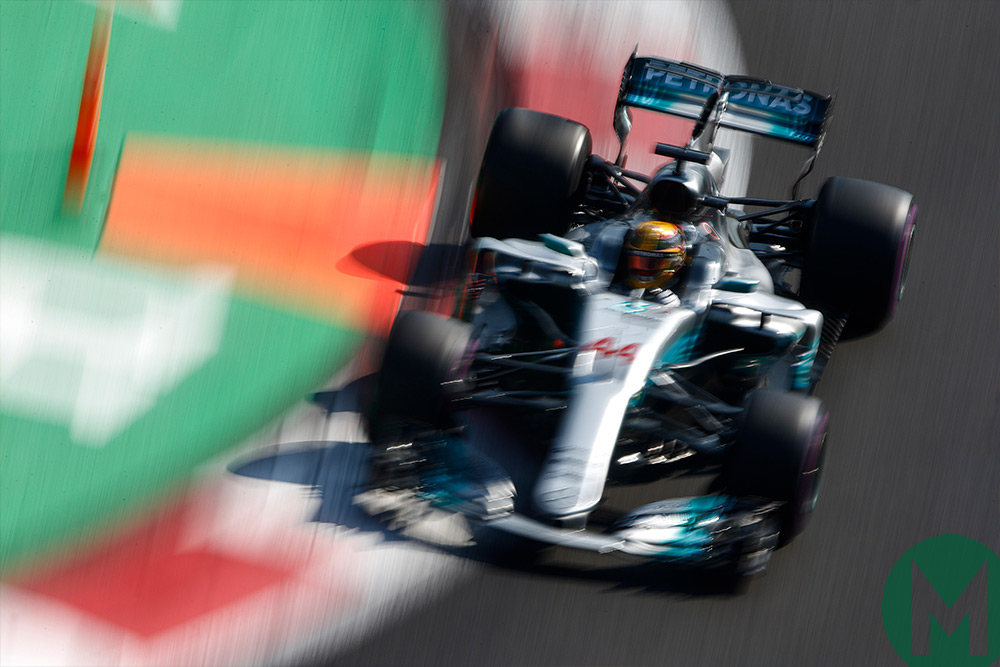 It wasn’t the performance he would have wanted in Mexico. But his title-winning drive was an anomaly in a season where Lewis Hamilton – especially since summer break – has been nothing short of outstanding.

The other drivers may not want to admit it, but it’s clear that Hamilton is still improving. It’s not only Hamilton’s driving that has moved up a level, either; there are many moving parts in becoming a better driver and often they’re indistinguishable. Andrew Shovlin, chief race engineer at Mercedes F1, explains that Lewis has been working harder than ever to understand the chassis, tyres and engine to better communicate his needs to engineers.

Hamilton has also developed a much more open relationship with Valterri Bottas than he had with his previous team-mate Nico Rosberg. In fact, after this year’s Malaysian Grand Prix Toto Wolff said his post-race debrief was the most productive he’d ever had with Lewis.

But most importantly, he’s getting more out of his Mercedes than ever before. This is most apparent – and best to analyse – during qualifying when the drivers are on maximum attack and not required to save fuel or tyres.

As we know, the Mercedes has a special engine mode that helps during Q2 and Q3, but in a chassis that has not always been the best on track Hamilton has without doubt overperformed. On average Hamilton has been three and a half tenths quicker than his team-mate this season, and he hasn’t been out-qualified by Bottas since Hungary in July. Bottas has only managed to beat him on a Saturday twice all year.

Lewis has increased his average qualifying advantage over Bottas in the second half of the season by 0.15sec, and while some of this gain is certainly due to a lack of pace from Bottas, the majority is thanks to Lewis.

To be clear, two qualifying sessions have been ignored to create a more balanced idea of ultimate pace. The first is from Monaco, where Hamilton was heavily restricted and didn’t complete his final run in Q2 due to a red flag – leaving him 14th.

Lewis’ gift is with his connection to the track’s surface. He has a natural and extremely sensitive feeling of how much grip is available and combines this with the delicate touch of his feet and hands.

I’ve watched hours of Hamilton’s onboard footage this season and what stands out the most is how subtly he transfers the load around the car. When a car is braking, turning or accelerating, its suspension is diving, rolling, squatting and mostly a combination of two. The less load that’s moved around the car – i.e. the less ‘spikey’ a driver’s inputs are – the higher the overall grip level.

This means a smoother, more fluid driver will have slightly more grip available to them than a driver who has sharper inputs with the pedals and steering wheel.

Lewis’ racing lines are more rounded than many of his rivals, he’ll introduce the car to the corner quite early and continue the turn for longer, allowing for softer inputs and less load transfer. This means that Hamilton can carry a higher minimum speed than other drivers, but the difference in lap time compared to a driver who squares corners off more can be negligible, it’s just a difference in style.

The real edge that Lewis has is his sensitivity. The smooth touch means that he can have his car closer to the edge of traction, in a more controlled manner for longer throughout the corner. More spikey drivers might be 0.5 per cent over or under the limit and so will not be able to carry the optimum corner speed.

Hamilton’s smooth style is most noticeable in corners where it’s not necessary to brake and just a lift will suffice. Watch his pole lap from Spa this year and listen to how subtly he lifts off the accelerator into Pouhon and especially into the second part of Campus.

Through these areas, the driver needs to transfer a precise amount of load to the front tyres to get it to turn in, but not enough to cause excessive rotation. As these corners have quite a long entry phase, the loads needs to be transferred forwards slowly or else cause too much oversteer and a reduction in minimum corner speed.

Hamilton is a pleasure to watch and due to his sensitivity under deceleration, whether it be lifting from the throttle or trailing off the brakes, he can carry massive speed into each corner.

Lewis also has a great feel in the traction zones. While other drivers break the traction threshold out of the slower corners, Hamilton rarely gets any wheelspin. Again, it’s due to his finely-tuned feet and ability to predict how much grip is available – and not spike over it – as he lays down the near 1000hp.

There is no doubt that this has been an impressive year for Hamilton, one where he’s not only won another World Championship but arrived at another level thanks to his thirst for learning.

He’s at a point in his career where he’s improving multiple processes by tiny fractions, but the sum of these small parts combine to become significant. It will be fascinating to watch how much better Lewis Hamilton can be.