As the two title rivals lined up on the grid for the start of the Abu Dhabi Grand Prix, the tension was almost unbearable.

Max Verstappen’s advantages of starting from pole position and on the soft tyres lasted a matter of metres. Lewis Hamilton on mediums, the better tyres for the race, seized the lead and the initiative, putting him on course to claim an eighth title.

The first stint went off without a problem for the defending champion, yet — with hindsight — the race was about to swing wildly out of his favour.

Verstappen stopped early for hard tyres, and Hamilton had to follow suit to maintain his position ahead of his title rival. That left Sergio Perez in the lead, with Hamilton catching quickly.

Perez couldn’t hold him at bay for long, and it initially looked as if the Mexican hadn’t quite done enough to get his team-mate back on terms. But the two-lap defence job that Perez performed on Hamilton won Verstappen his first world championship crown. 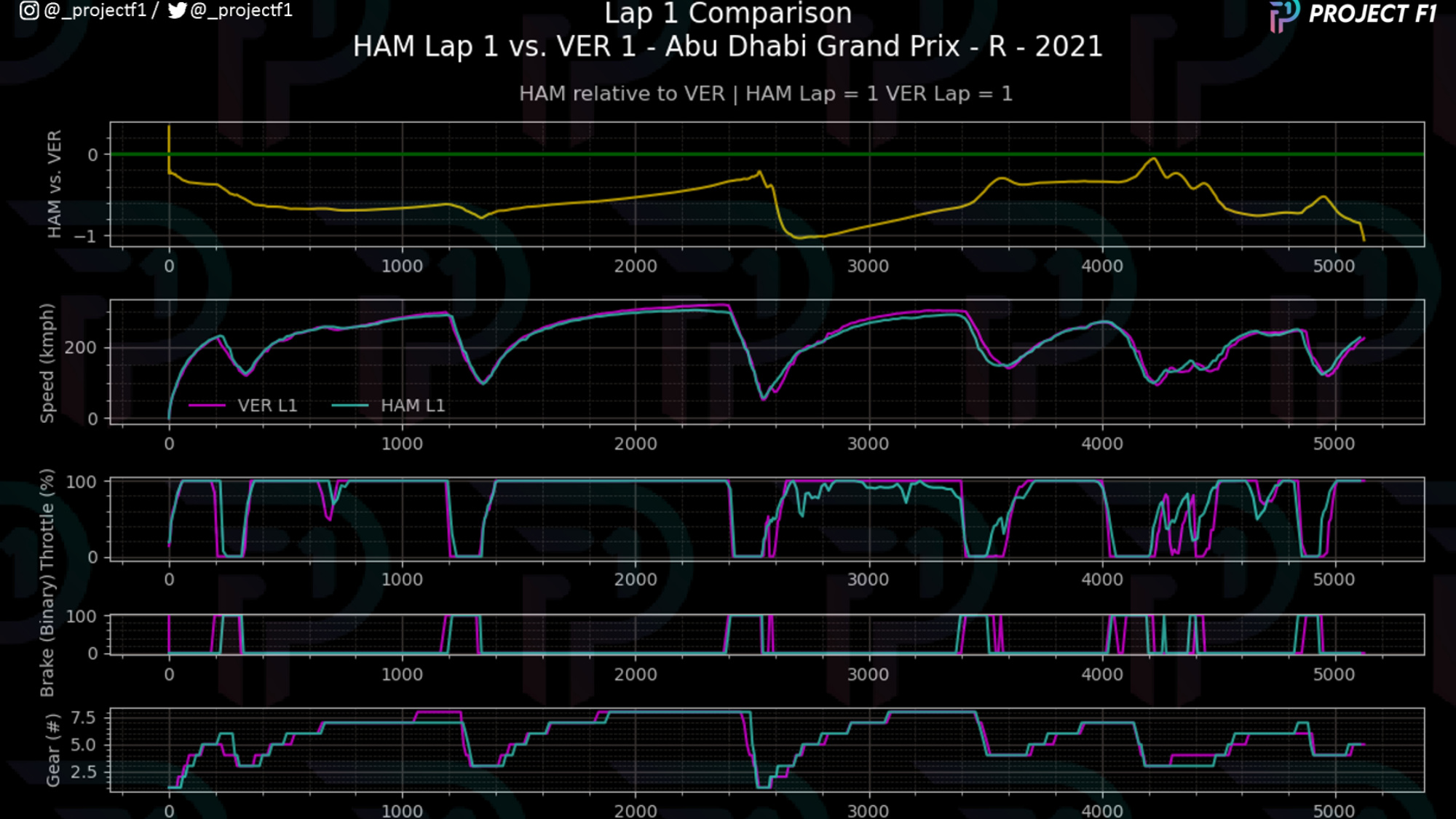 Firstly, the move that put Red Bull on the back foot.

Hamilton had a brilliant launch from P2 on the grid while Verstappen struggled to get going. The former’s reaction time was a whole tenth quicker than Verstappen, a huge amount in the scheme of things from a front-row launch.

But down the first of the back straights, Verstappen had a nice tow and with a fair amount of bravery, attempted to re-pass the Mercedes. Verstappen actually brakes fractionally earlier than Hamilton, to be expected with the overspeed from such a tow, but couldn’t complete the move as Hamilton went off the circuit.

Evident at around 2350m on the above chart, Hamilton could get back on throttle much earlier to retain his position, but as the throttle trace also shows, he backs out of it multiple times along the next straight to hand back some of the advantage he’d gained missing the chicane.

The move is very strategic as Red Bull might have said last week. With the lack of a good tow into the fast Turn 9, the chances of losing position were slim and Hamilton retained the lead that set him up for a very strong race from there. 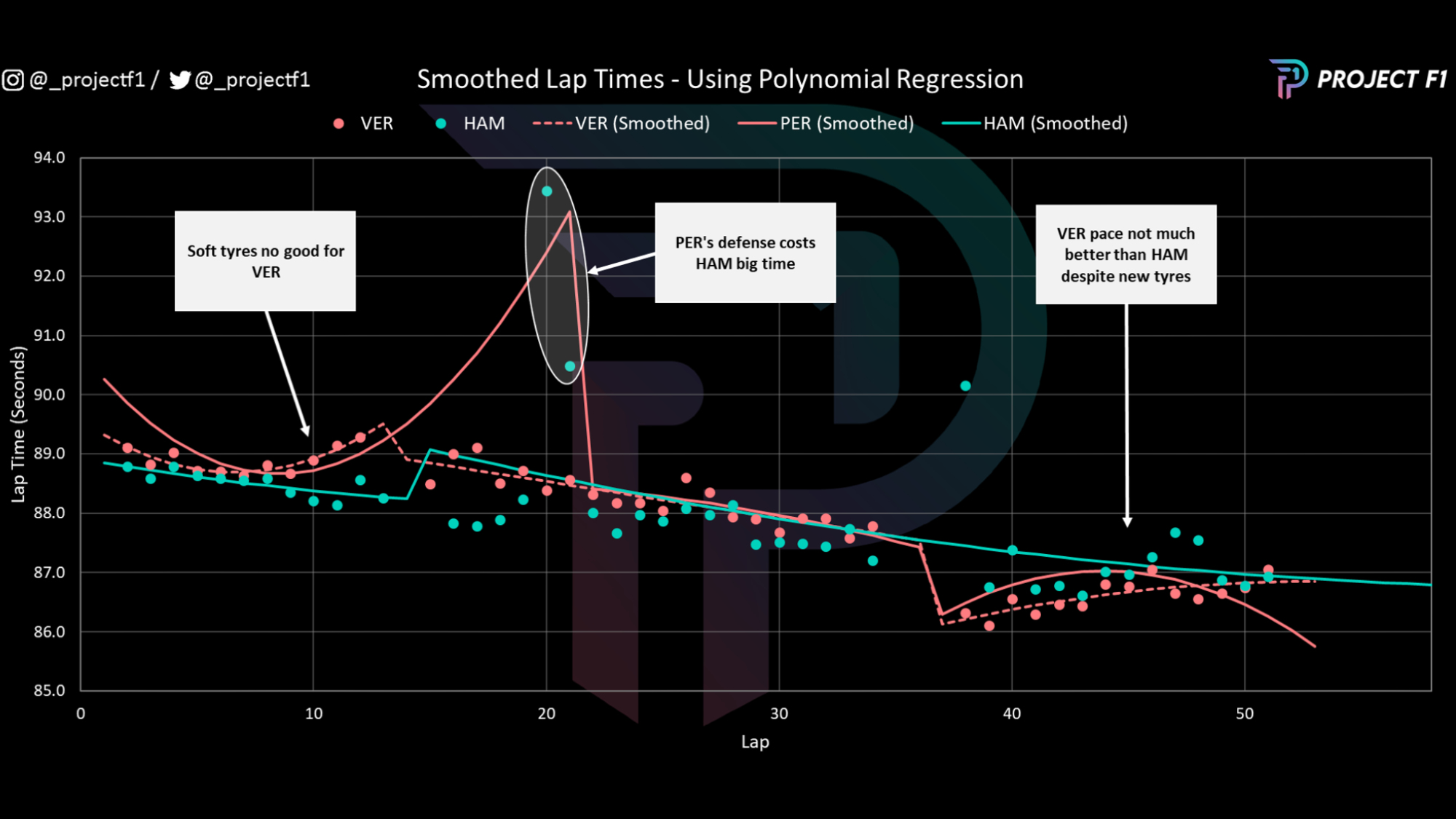 After getting the lead from the start, Hamilton set off into the distance at a pace Verstappen couldn’t quite live with, especially as his soft Pirelli tyres began to fall away from peak performance.

No doubt his pace would have been hindered by following Hamilton so closely through the very early stages but practice had revealed the softs couldn’t sustain themselves for very long after the peak of the tyre had gone away. It’s unlikely Verstappen would have been able to build up much of lead such was Hamilton’s pace on the mediums.

His qualifying lock-up on the medium tyres in Q2 turned out to be quite a big mistake.

But Red Bull was about to play its joker. Perez remained out on track and as has been the case in years gone by, eked out the tyre life as best he could, preserving as much as possible while remaining in Hamilton’s pit stop window.

When Hamilton pitted, rejoined and eventually caught the second Red Bull, it was the pivotal moment of the race that was decided by drivers on a race track.

Perez is able to reduce a 9sec gap between Verstappen and Hamilton to just 1.9sec after two critical laps.

As shown in the chart below, Perez won Verstappen five seconds on lap 20 and a further two on lap 21 alone. 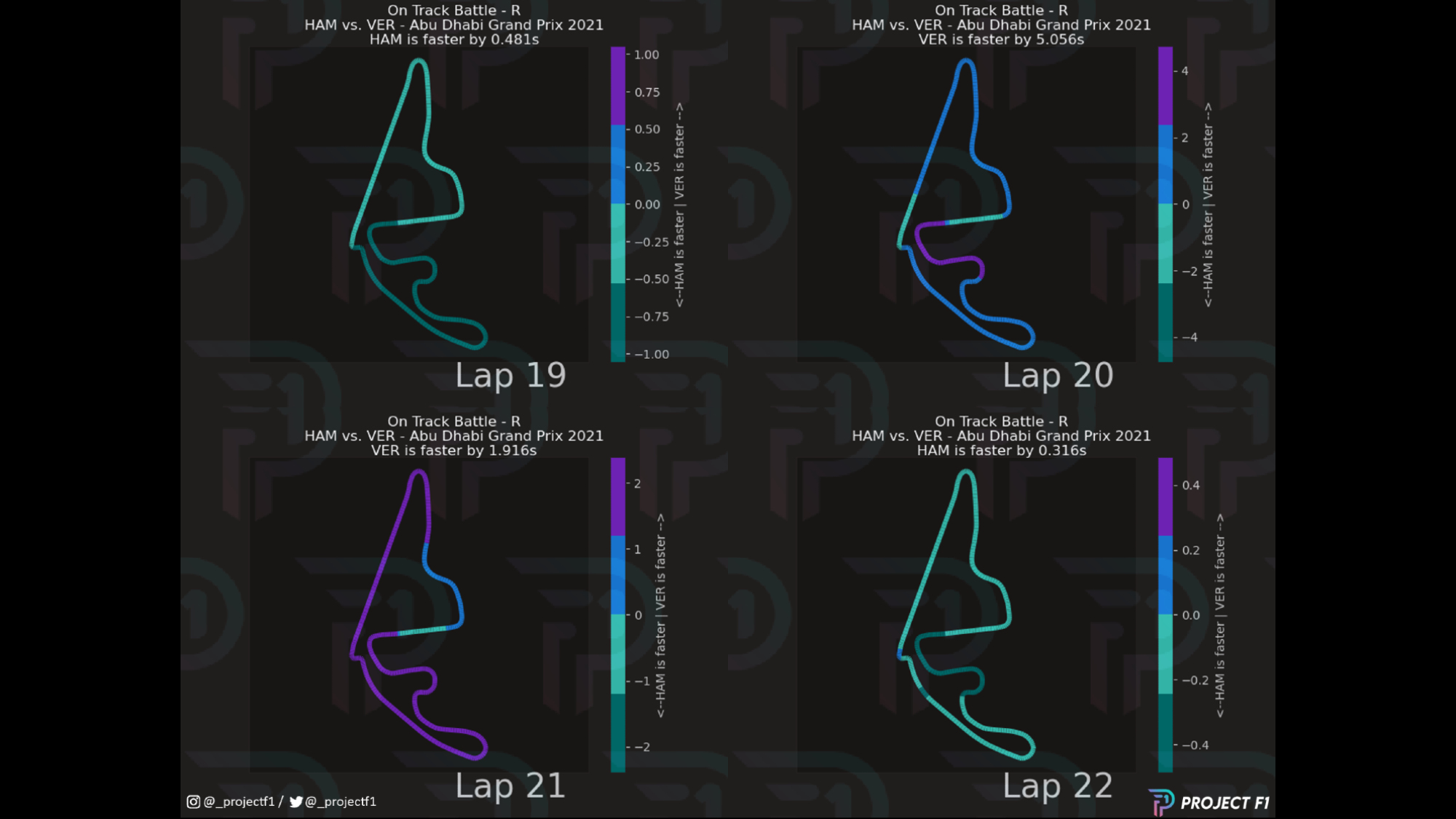 Lap 20 and Perez was expert in his positioning of the car to have the most damage in sector three, critically where he would be able to keep Hamilton behind without much threat of being overtaken.

The timing of the blocking was perfect in Red Bull’s favour. As Hamilton arrived on the gearbox of Perez, Verstappen had cleared Carlos Sainz following his pit stop and was roaring uninterrupted up to his title rival.

Perez’s defensive prowess is evident in the chart below. Displaying data taken from both drivers on lap 20 from all three, Perez is able to slow right down in sector three, evident from 4000m onwards, baulking Hamilton in the process.

Following his overtake on Perez, Hamilton returned to his prior pace and was able to build up another advantage over Verstappen, evident by the dark blue line showing data from lap 22. But he’d already lost crucial time in that two lap period. 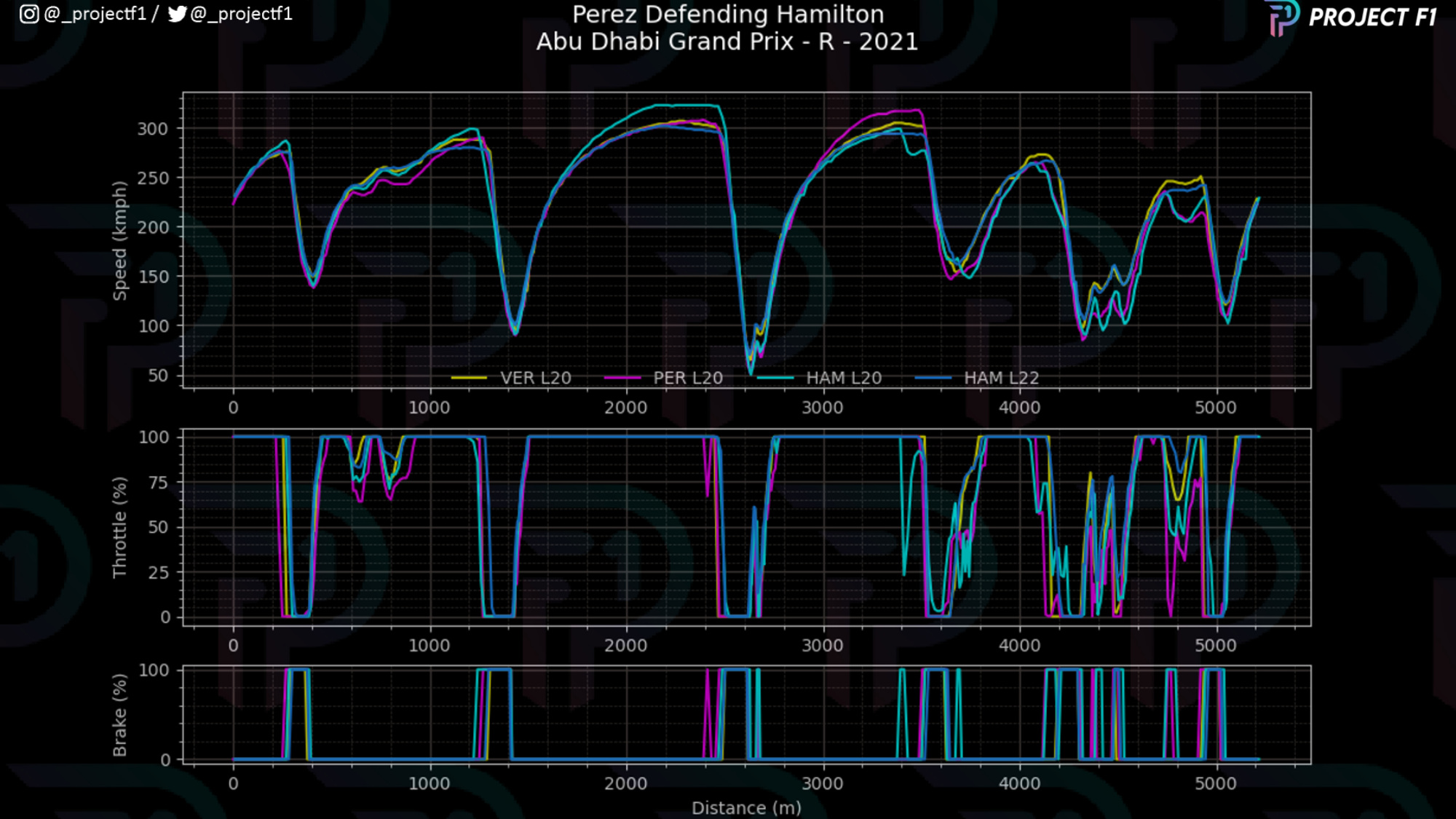 Critically, with the delay allowing Verstappen to close back up on Hamilton there was no longer a cushion for Mercedes to exploit in the scenario of a virtual or actual safety car being deployed.

It looked as though for much of the afternoon that such an eventuality wouldn’t happen, and that Hamilton was set to cruise to the finish unimpeded after passing Perez and keeping him outside of his pit stop window.

Things appeared straightforward for the reigning champion until Antonio Giovinazzi came to a spluttering halt on lap 36. The VSC was then deployed to recover the Italian’s car.

Hamilton remained out on track, unwilling to cede track position to his championship rival at the risk of setting up another wheel-to-wheel fight with Verstappen – who could afford a double DNF. 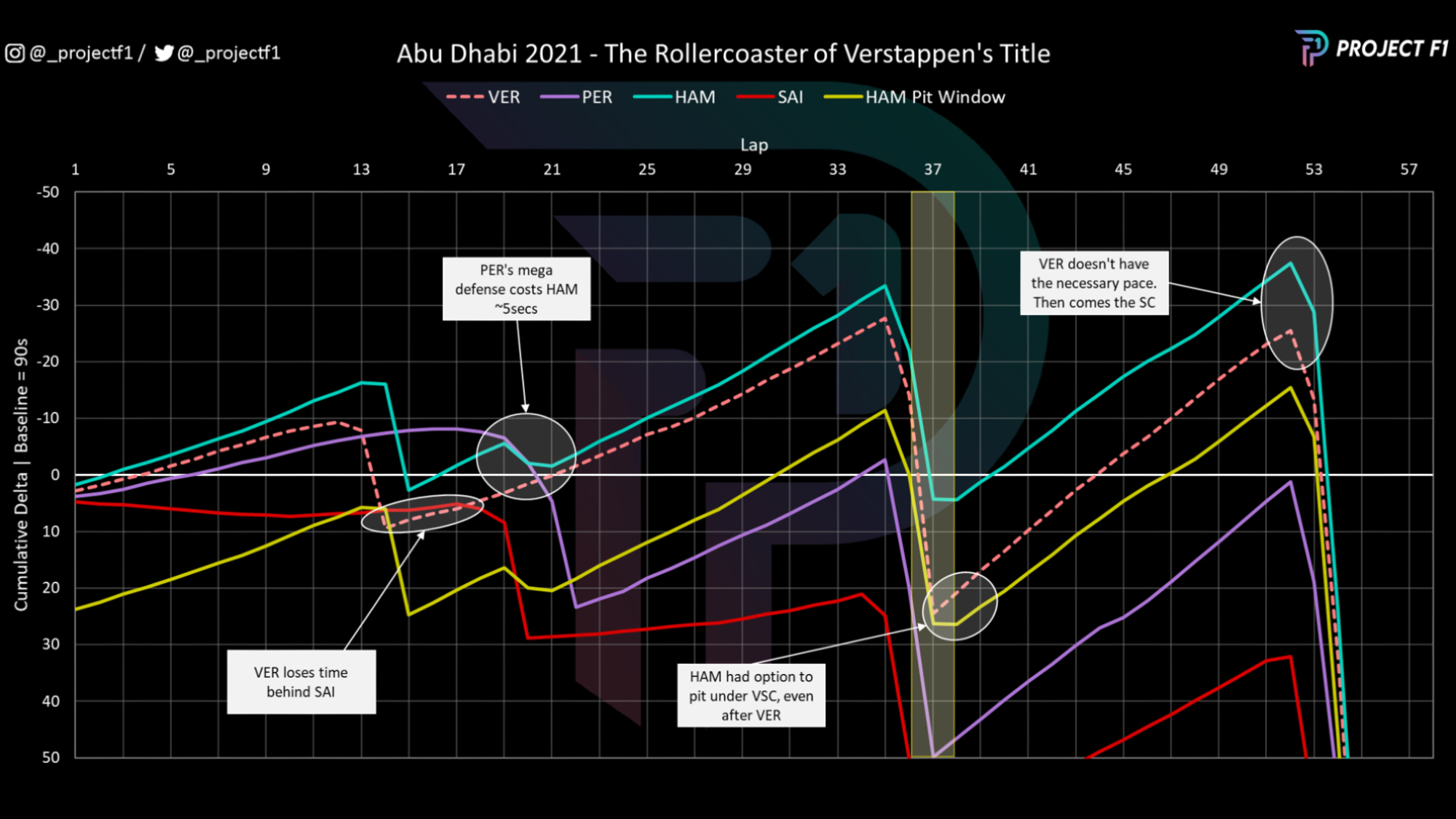 Mercedes had already considered the possibilities just three laps prior:

Pete Bonnington: “If we are to stop under safety car, do you prefer medium or hard?

Lewis Hamilton: “Both tyres feel good. This one [hard compound] does too.”

Yet when Verstappen did pit and the gap opened up further, the VSC remained on track for another lap. As Hamilton approached the pit entry on lap 37, the camera cut to the stranded Alfa being wheeled back behind the barriers and Mercedes said: ‘stay out’.

The yellow trace on the above chart is Hamilton’s race time with 22sec added to it to simulate a hypothetical pit stop under green flag conditions. The loss of time behind Perez put him in a marginal position versus Verstappen for an extra stop, with the pit stop delta at around 14sec under a VSC/SC.

As Verstappen rounded Turn 14 and the VSC was withdrawn, the gap to the leader was around 18-20sec. With two corners of the lap for Verstappen to get back to racing speed, Hamilton would have been navigating the pit exit. Emerging back on track with the lead or rejoining just behind Verstappen, the pair would have been separated by a knife-edge.

But even if he’d have lost track position, hamilton would have been much closer to the Red Bull driver than if he had made another stop under green flag conditions.

By Mercedes opting to remain on track, it left Hamilton vulnerable to any further safety car intervention that, with hindsight, we know was a critical error from the team. However, it can’t have known during the race, that this was an eventuality that would play out. 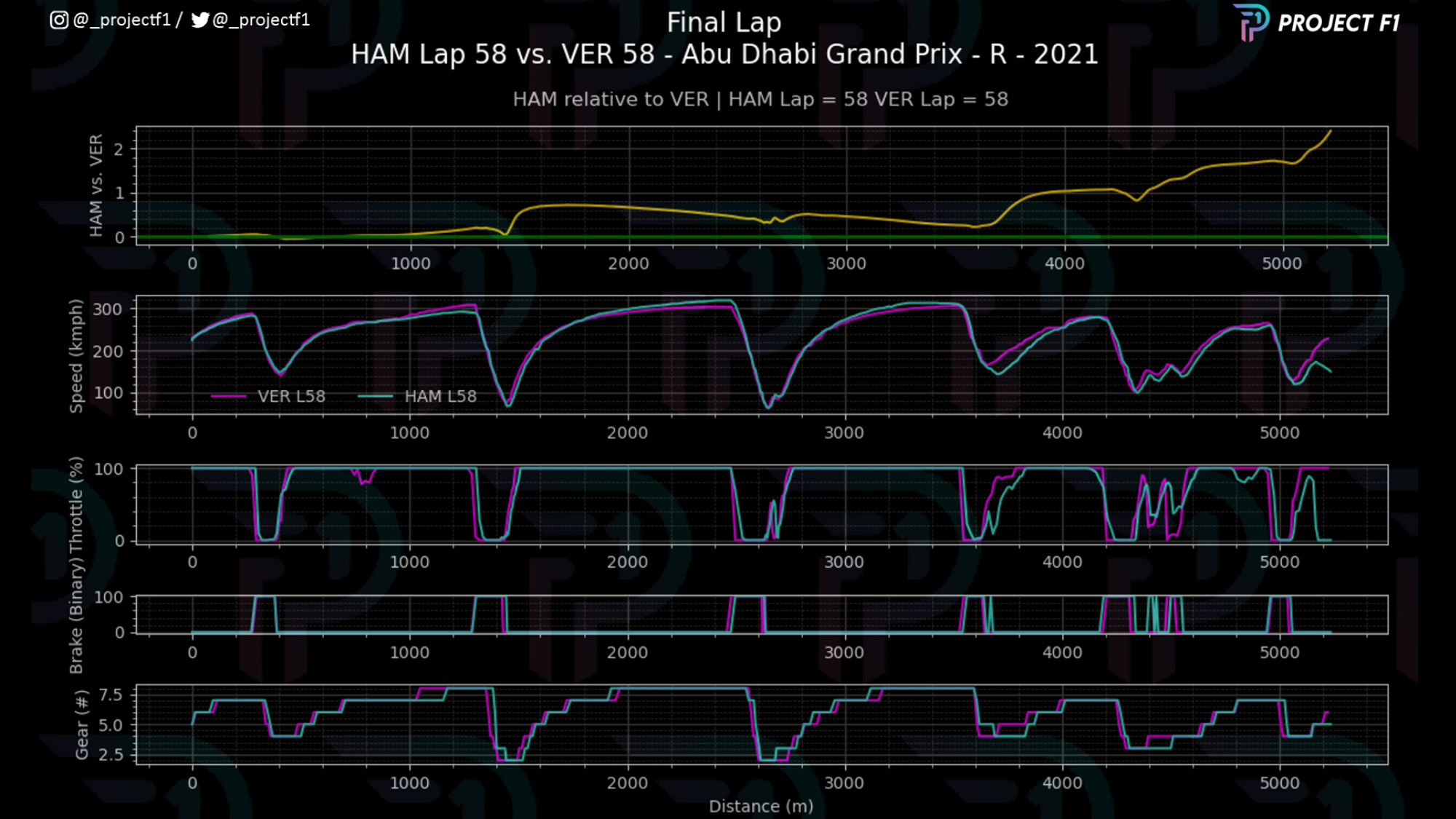 Telemetry of the final lap between Hamilton and Verstappen

And so when the safety car was controversially withdrawn with just a single lap of the 2021 season remaining, and with Verstappen now on soft tyres versus Hamilton’s 44-lap old hards, the race was all but decided.

It was a circumstance Mercedes could not have envisaged, the safety car deployed and withdrawn in time to leave it defenceless after Michael Masi removed any obstacle for Verstappen to overcome to catch the leader on his fresh tyres.

Hamilton would have needed something out of this world to have kept the Dutch driver behind, but the two long straights presented a major threat to his lead with Verstappen showing he was more than willing to dive down the inside from some way back.

It never got that far. 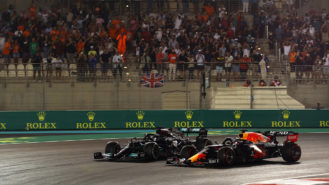 Yes, the 2008 title finale was dramatic, but this one topped it. Max Verstappen won the race in Abu Dhabi and thereby the world championship by overtaking Lewis Hamilton on…

Hamilton was on the brakes at the same point as Verstappen but the Red Bull’s overspeed into Turn 5 gave him the impetus to dive to the inside and take the position.

With the slipstream on both straights, Hamilton’s top speed is higher than Verstappen’s but with DRS disabled until three laps after the safety car has returned to the pits (three laps beyond the end of the race), Hamilton’s task was just too much to overcome.

He’d led from the start and strategically handed back the advantage from the controversial lap one scrap with Verstappen and looked set for victory from there.

But it was the valiant defensive driving from Perez that left Mercedes vulnerable enough to the Mexican’s team-mate that meant when the chaos unfolded, there was too much risk involved for Hamilton to mirror his closest rival. Had Valtteri Bottas been in play, it may not have unfolded in the manner it did had the Finn been able to remain in Verstappen’s pit window.

Not pitting under the VSC turned out to be a race-costing mistake and when the worst-case-scenario of a late safety car emerged, it was all but over for the 2020 champion.

Hamilton hadn’t put a foot wrong in the title-deciding finale but the Mercedes team was exposed to being strategically weak versus a Red Bull team with nothing to lose and everything to gain.