The United States Grand Prix is back on the calendar after a one year absence and the fight for the 2021 title is still too close to call between Max Verstappen and Lewis Hamilton.

Six points currently separate the championship contenders but the balance of power between Mercedes and Red Bull is arguably closer than it has been all season thus far.

The recent chaos from rain or collisions has disguised the true order since the summer break but Red Bull fears Mercedes might have found another level in performance with its engines. Will COTA prove that true this weekend with dry conditions expected from start to finish?

Highlights will be on a little later than usual with the time difference to the US meaning you’ll need to grab a coffee if you’re hoping to catch the race on Channel 4 at the earliest opportunity.

Here are all of the TV channels, timings and sessions for this weekend’s United States Grand Prix.

How many laps is the United States Grand Prix?

The 2021 US Grand Prix is 56 laps of the Circuit of the Americas in Austin, Texas. There is a 17% chance of rain during Sunday’s race and even less of a chance expected throughout the rest of the weekend.

Sky Sports F1 and Sky Sports Main Event are showing both qualifying and the race live this weekend. The F1 channel will feature both pre and post-race coverage too while all three practice sessions will be solely available on Sky Sports F1 from FP1 on Friday to FP3 on Saturday.

(Late highlights due to time difference)

NowTV shows all of the Formula 1 sessions live as they happen via the Sky Sports F1 channel. You’ll get all of the pre and post-session coverage that you do on TV and can buy a weekend pass to stream the race live.

This weekend looks set to be the first race since Monza that won’t be affected by rain. That Italian GP also has the caveat that both title contenders took each other out of the race so we never did find out which driver would have prevailed in their battle following the pit stops.

The race prior to that was at Zandvoort and Red Bull was comfortably the faster package around there. Since then though, Mercedes has introduced a fresh power unit for both of its drivers (two in the case of Valtteri Bottas) and that might have turned the tables in the reigning champions’ favour. 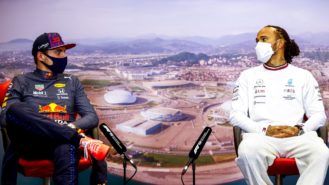 Seven F1 races to go: do they favour Verstappen or Hamilton? - MPH

Two points separate the duo but of the seven remaining races, which favour Red Bull and which are Mercedes tracks?

Red Bull team principal Christian Horner believes that Mercedes is now running its engines at a higher power mode at the cost of poorer reliability so another issue with an engine isn’t ruled out just yet.

Hamilton received a fresh ICE in Turkey though couldn’t make the podium from 11th on the grid. But even in the rainy conditions Mercedes looked the faster car. Though he and the team will be worried about any unreliability between now and the end of the year, the fact he took just a single new component instead of a totally new power unit suggests the team believes it can make it through.

The back straight at COTA is plenty long for the supposed extra power to make a difference though the twisty sectors one and three will balance the books back towards Red Bull.

If qualifying is close and falls in favour of Verstappen, the higher engine modes might come into play and rescue a much-needed race victory for Hamilton.