It wasn’t much of a secret in recent weeks, was it? Mercedes told George Russell he would be driving for the team in 2022 before the Belgian Grand Prix, and then he had to spend two weeks keeping it to himself.

But while he couldn’t talk about the upcoming move until it was made official on Tuesday, Russell could talk about his current team. In fact, it was notable that the 23-year-old spoke more about Williams in his press release quote announcing his Mercedes drive than he did about Mercedes.

Williams has been a huge education for Russell, from the struggles at the back of the grid that 2019 provided to clinging onto the back of the pack last year and now being able to fight for Q2 and even Q3 on a regular basis. He’s gone from driving in Formula 1 to racing, and with that progression has been able to show his development to Mercedes and the rest of the grid.

“There’s definitely been a lot of lessons along the way,” Russell told me. “There have been mistakes I’ve learned from – which I think is only natural for any young driver coming into a new sport and getting up to speed – and I’m sure they won’t be my last mistakes either. We’re only human, but I feel a more complete driver than I ever have been and I feel like we’ve made incredible progress over these three years.

“Especially last year to this year, in a season where the regulations stay very stable and there’s not a huge amount we could do, it was down to the driver and the engineers to try and find more performance from areas. I think I’ve really improved on the technical front which I think will put me in good stead for the future.

“It’s something I’ve been so grateful for, and in ways having such a difficult race car – especially in 2019 and 2020 – probably forced me to work even hard on that front.” 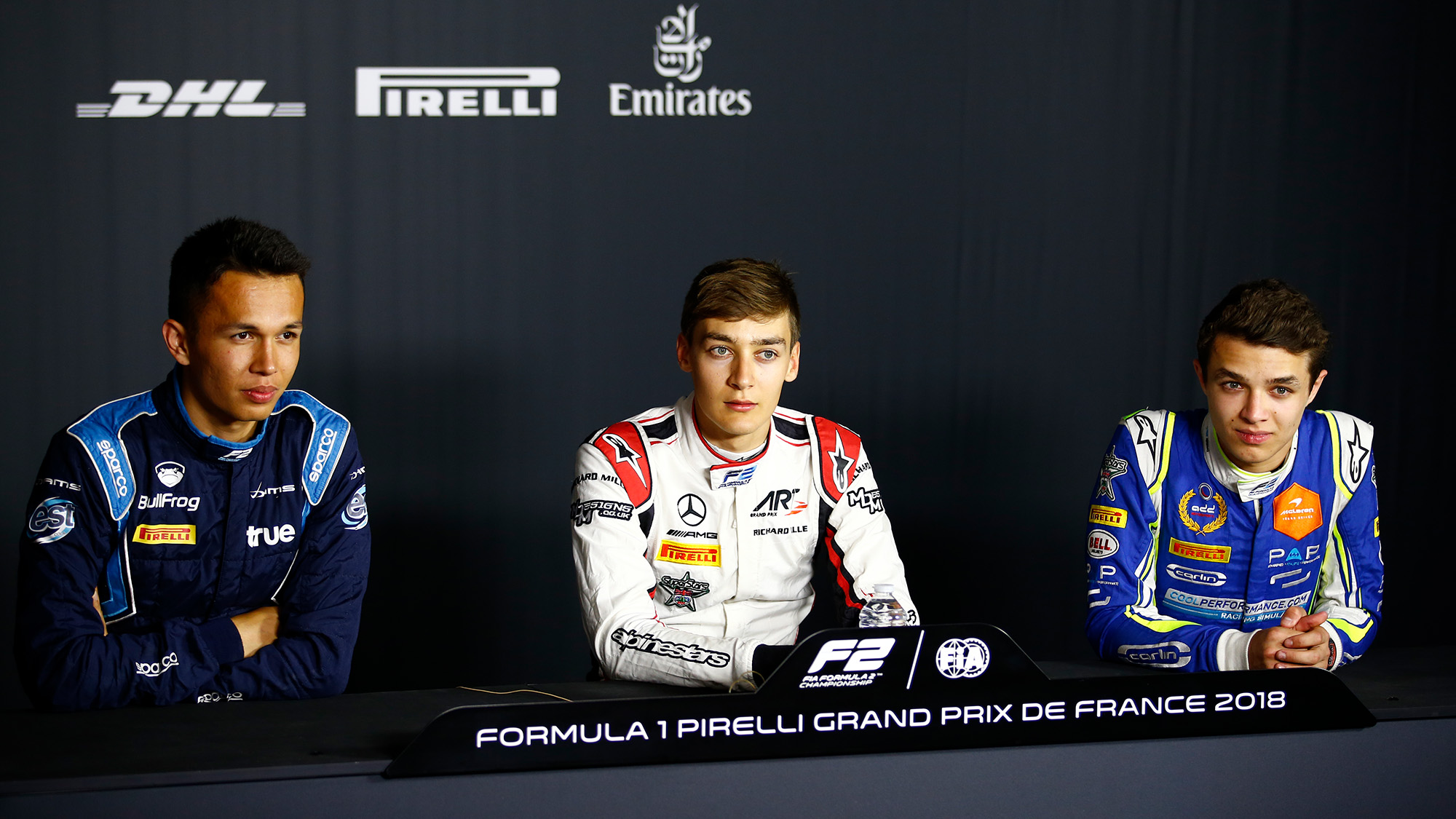 Russell won the F2 championship in 2018, ahead of Norris and Albon

Given how tough 2019 was, Russell could be forgiven for feeling a little short-changed after winning the Formula 2 championship in such style but then seeing the drivers he beat – Lando Norris and Alex Albon – in much more competitive machinery. But he drew inspiration from the team around him who were all pushing to improve matters from that low point.

“The team have been on a similar journey to myself where there’s been a lot of difficult moments and it’s been a real test of character to push through psychologically. I think it’s forced us to look at every single area, to see how we can improve.

“If you have a fast race car it’s quite easy to not look at the small details because you think everything is sunshine and glory, but when you do have some very difficult years we’re really made to look at ourselves in the mirror and think ‘Are we doing a good enough job in this area and that area?’.

“Even back at the factory the correlation and work ethic, especially since Jost came onboard, has been a real boost for everyone.” 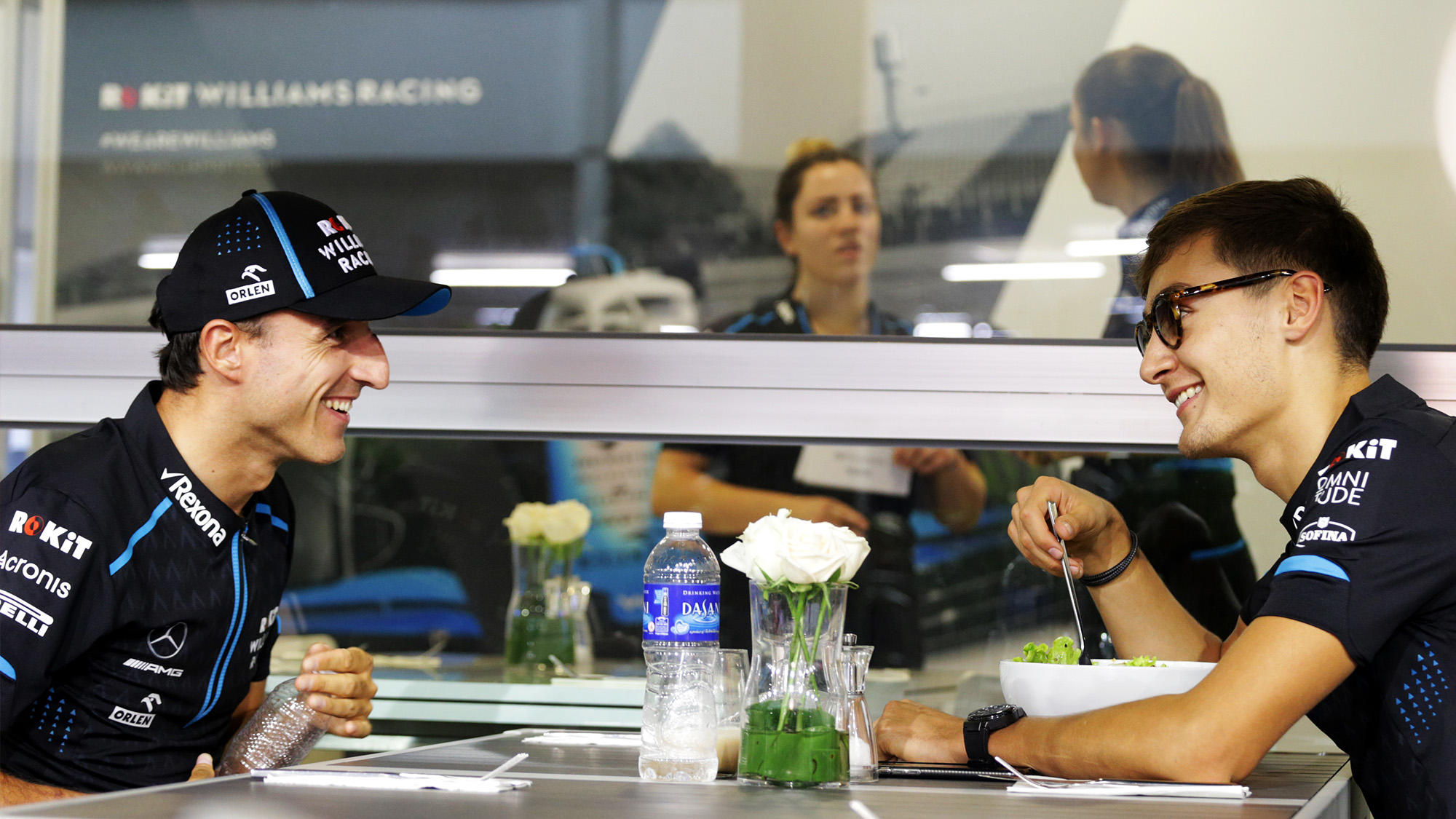 Kubica inspired Russell to up his game

While Russell is now looking forward to a spell as Lewis Hamilton’s team-mate in what is likely to be a race-winning car at the very least, it’s one of Hamilton’s old rivals who he credits with showing him just what it was going to take to be a more rounded driver.

“I feel like I’ve made huge progress since 2019, I feel like I can come to the track and discuss openly with the engineers about different set-up options and items and what I believe would work in this part of the track or these corners, why we want to go down this direction. This was really benefitted by just seeing how educated Robert was, which really helped me in 2020 and this year when Nicholas [Latifi] came onboard as a rookie.” 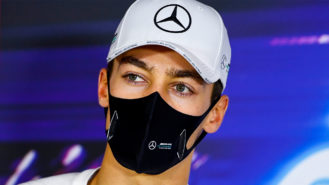 George Russell on his Mercedes chance: 'It's no secret, I just want to win'

Four years as Mercedes junior, three with Williams, now George Russell is ready to step up to the top table – and he's unequivocal in his aim

Latifi was the driver who actually gave Williams the greater share of points when Russell finally finished in the top ten in Hungary, but despite being second on the road to his team-mate, the Briton was in tears after the race.

It was the culmination of so much work that had led him to the point of becoming a Mercedes driver, and it felt like a more tangible reward before that contract was finally signed.

“I wouldn’t say I was worried that it might never come, but we had so many occasions where we were so close and always something seemed to happen. But we kept on fighting and fighting and I think that’s why it all came to me after the race, because we didn’t give up and when you’re down in the weeds and you’re trying to fight back out and you’ve got these small opportunities that go amiss, you sometimes start to think: ‘Why am I… Is this ever going to happen?’

“But we just kept on fighting and I think it really shows why.” 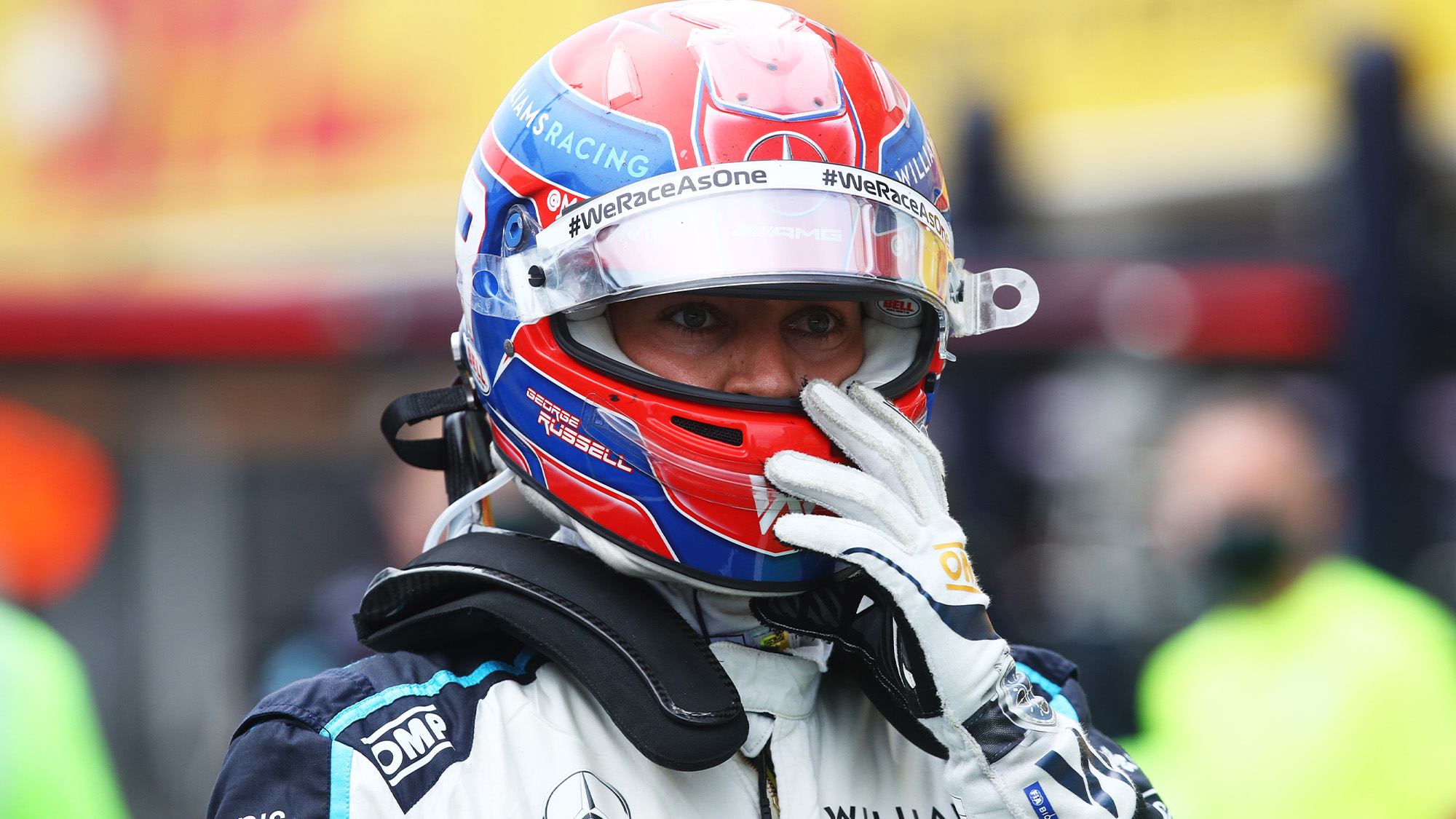 Emotional Russell was overwhelmed by Latifi’s points in Hungary

At the time of the race in Hungary, Russell insists he hadn’t been definitively told where his future was going to be. And it was a situation that offered him the chance to address one of the arguments that was often used against him being promoted – namely whether he would be the same team player Valtteri Bottas has been at Mercedes.

With Latifi running third after the chaotic start to the race, a very clear radio message from Russell was broadcast: “If you need to compromise my race to help Nicky, do it. I will box early to avoid the undercut for anyone else. Prioritise Nicky.”

Russell insists it wasn’t directed at anyone other than Williams, but it surely can’t have helped alleviate any potential concerns on that front.

“That was just something in the heat of the moment that I felt was a necessity to say because obviously I’ve been very loyal to the team and I can understand why they want to be loyal and give me the opportunity too, but my goal is to seal the team P8 in the constructors’ championship, and to be honest I don’t really care if that comes from a result from Nicholas or a result of mine.

“Obviously I wish it was a result of mine but in our position we’re not naive to the fact that we need to get a little bit fortunate to be in that position. We’ve had some excellent races and it’s just not been enough, so obviously I’ve done 50 races in F1 now and taking away my DNFs I think I’ve had my team-mate finish ahead of me on four or five occasions out of 50 and two of them have been for points!

“So it’s just one of those things I guess, but equally I wouldn’t change it because I want to win a world championship, that’s not a realistic goal this year, but my target will be accomplished if we finish eighth in the constructors’ championship and I’ve contributed to that.

“Whether I score all the points or none of the points, all of the team contributed to it one way or another. I push Nicky, Nicky pushes I, and that is contribution enough.” 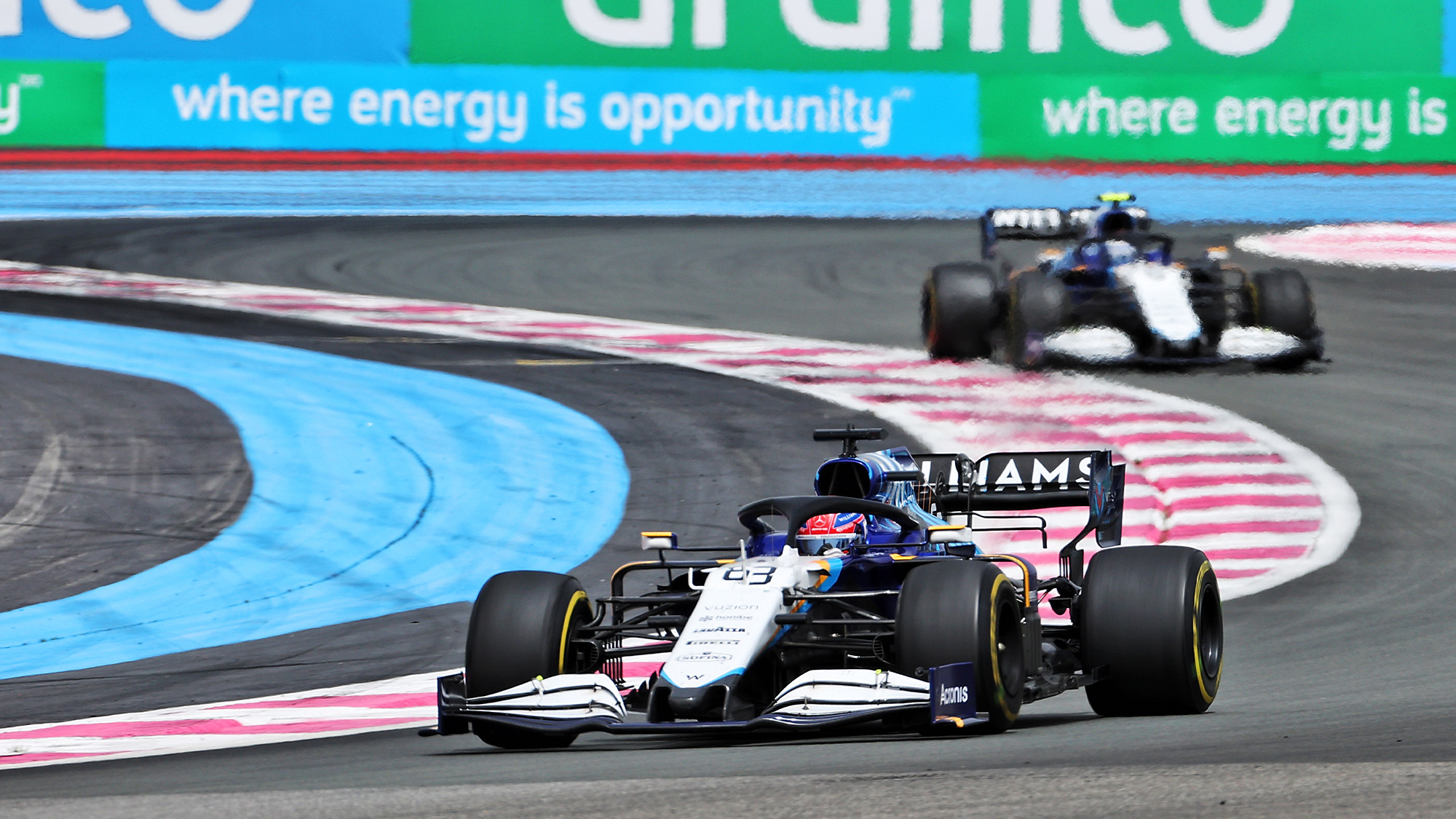 There are nine races remaining for Russell to complete his target on the track and right now it’s looking good. Beyond that he will have to watch how Williams gets on from afar while taking on his new challenge at Mercedes, but he won’t forget just what a role it played in his future, and hopes the same will be true for the team.

“I’ll feel a huge amount of pride to see the progress we’ve made over these years, and hopefully have contributed to the resurgence of Williams.”