He didn’t appear to be suffering from Hungarian heatstroke, so we guess he was being genuine. Jenson Button, looking tanned and relaxed in the paddock yesterday afternoon, stated quite clearly that he remains optimistic McLaren can win a race this season, despite all evidence to the contrary from his MP4-28. Raised eyebrows all round, then. 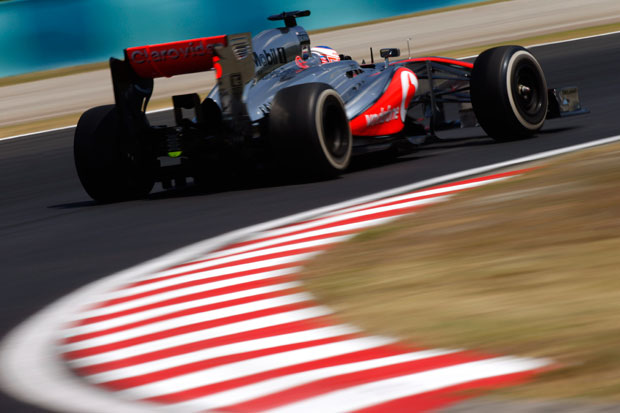 The former world champion, who ended up ninth fastest after today’s opening pair of free practice sessions at the Hungaroring, is sincere in his confidence that McLaren has made real progress with its disappointing race car. A competitive sixth place in the German GP three weeks ago has given Button new cause for optimism following lacklustre results in Montréal and Silverstone, where he finished 12th and 13th respectively.

“We still want to win a race and I still think we can,” he said with conviction. “The last race for us was a good step forward and morale is high. Obviously we’re not satisfied fighting for fifth or sixth place, we want to win. But it’s good to see a step forward.  And here we have some more parts, which should help us get closer to the front.”

The team has stated that its main focus has already switched to the 2014 car and the new rules it must adhere to, but they haven’t given up on the MP4-28 yet. Indeed, it has been heavily revised aerodynamically in a change of development direction more in keeping with its predecessor, the car that finished last year as F1’s fastest.

And the next race after the summer break is the one Button’s really got his eye on.

“Spa is a race I’m really interested in and excited about, fighting for a podium,” he said. “That has to be our aim and I think we can. The main aim is to win a GP this year and at the moment Spa is the best race for us to look for that. We understand the circuit and we understand what we should bring to that circuit in terms of aero.”

But for now, at a circuit requiring Monaco levels of downforce, Button would probably be more than satisfied with another sixth place at the Hungaroring. His team continues to trail Red Bull, Ferrari, Lotus and Mercedes in F1’s pecking order.

The Red Bulls looked dauntingly impressive during both free practice sessions today, Sebastian Vettel leading Mark Webber for a team one-two in both. The world championship leader’s fastest time of 1min 21.264sec edged out the Australian by just 0.044sec in the afternoon.

Hungary is the first GP in which Pirelli has supplied 2013 compounds with last year’s specification of construction, and the ‘mediums’ and ‘softs’ allocated for this weekend should lead to a proper motor race as we saw in Germany, rather than the tedious tyre-saving endurance runs of earlier rounds. Having said that, how long each team can make the soft compound last could well be the deciding factor on Sunday. And on this point, Red Bull is looking strong. 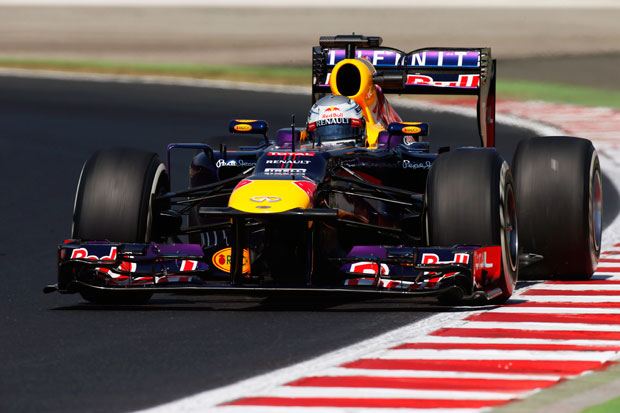 Both Vettel and Webber put in nine-lap runs on the softs after they’d set their quickest times, with only a minor drop in pace as the stints played out. Vettel also showed a clean pair of heels to everyone, including Webber, with impressive speed during these runs.

In comparison, Fernando Alonso’s Ferrari lost more than two seconds per lap from the beginning to the end of his stint. The Spaniard stated the obvious yesterday when he said he can’t afford to lose more ground to Vettel in the title race if his championship hopes are to remain realistic. On the face of today, he’ll need a clever race strategy to achieve that aim.

Alonso ended the day fourth fastest, just 0.162sec down on Vettel, with Romain Grosjean splitting the Red Bulls and the Ferrari. The Lotus man looks set to follow up on his impressive Nürburgring form as he chases the first GP victory of his career. Could it come this weekend? Although the Red Bulls look good at this stage, it’s mighty close between the top three teams on one-lap pace. 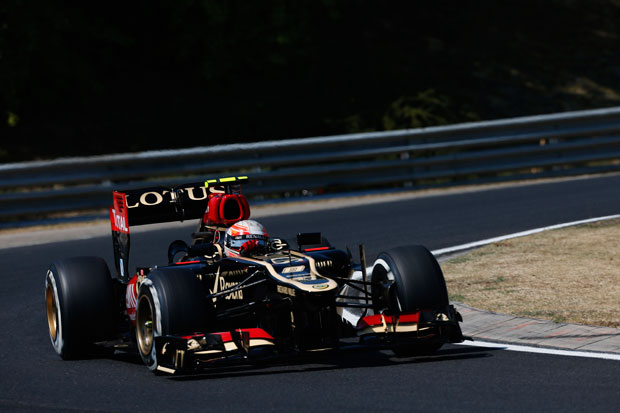 Mercedes duo Lewis Hamilton and Nico Rosberg have already ruled themselves out of contending for victory this weekend, with track temperatures reaching the mid-40s during the sessions. They trailed fifth-fastest Felipe Massa to end up sixth and seventh, just ahead of Kimi Räikkönen’s Lotus. The Finn was baulked by Button as he prepared to go for a time. 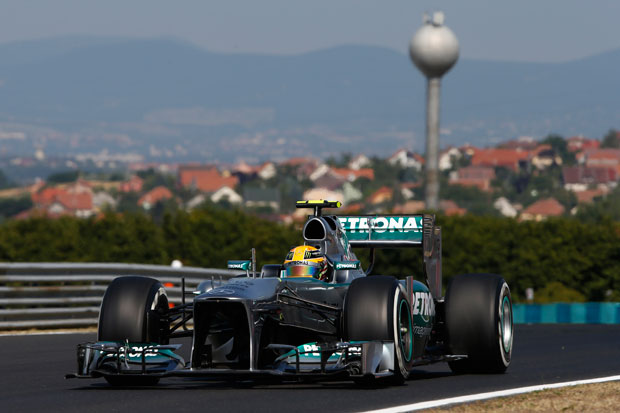 “It wasn’t ideal today but it wasn’t that bad either,” said Kimi. “We took a bit of time to understand the new tyres and it was also very hot. It’s too early to say if the heat will suit us with these new tyres, but we’ll soon have a better idea.”

Adrian Sutil, who will mark 100 GP starts on Sunday, completed the top 10 ahead of Force India team-mate Paul di Resta.

Pirelli motor sport boss Paul Hembrey reported that there was “very little sign of any graining or blistering,” despite the intense heat the sessions were run in. “The performance gap between the two compounds today was around 1.5 seconds and we are likely to see between two and three pit stops during the race, with the majority of the field qualifying on the soft tyre,” he added.

“We have a new pitlane speed limit from this grand prix onwards of 80 kilometres per hour, which puts around four seconds on the total pitstop time. This too is likely to have a big effect on the strategy, which makes the work carried out today all the more important when it comes to planning team tactics – particularly as it’s hard to gain track position at the Hungaroring through overtaking alone.”

Just like Monaco, tomorrow’s qualifying session will carry heightened importance beyond those of other circuits on the calendar. If Saturday goes to plan for Lotus, the team will fancy its chances against those rapid Red Bulls.