Sunday’s Japanese Grand Prix all but settled the Drivers’ World Championship. Even feisty Fernando Alonso had to concede that his distant fourth at Suzuka would serve only to prolong Ferrari’s agony. 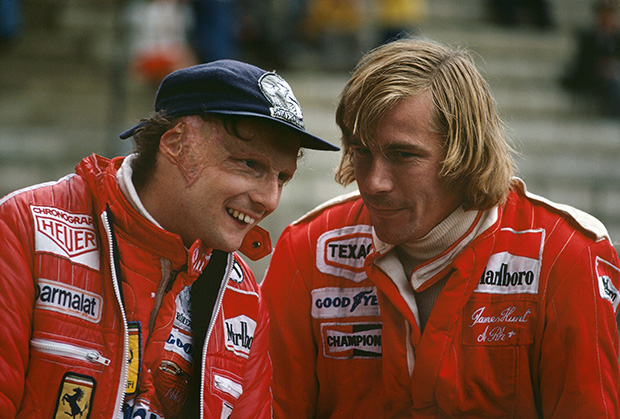 Sebastian Vettel’s fourth consecutive title would have been done and dusted, with four rounds remaining, had his Spanish rival finished ninth. As it stands, the German is 90 points to the good, with only 100 still available. Thus a champion is likely to be crowned for the first – and probably the last – time in India.

The Japanese GP, in contrast, has a long history of wrapping up championships – some less satisfactorily than others:

In 1987, Nigel Mansell hurt his back in a practice crash and withdrew, handing the title to Williams team-mate Nelson Piquet.

In 1989, Alain Prost turned in on McLaren team-mate Ayrton Senna. In 1990, the latter showed the Frenchman, now at Ferrari, how to do it ‘properly’: shunting at 150mph, not punting at 50; it wasn’t until 1991, however, that the overwrought Brazilian admitted, during his champion’s press conference at Suzuka, that he’d always planned to jam his right foot in if Prost left a sliver of a gap at Turn One. 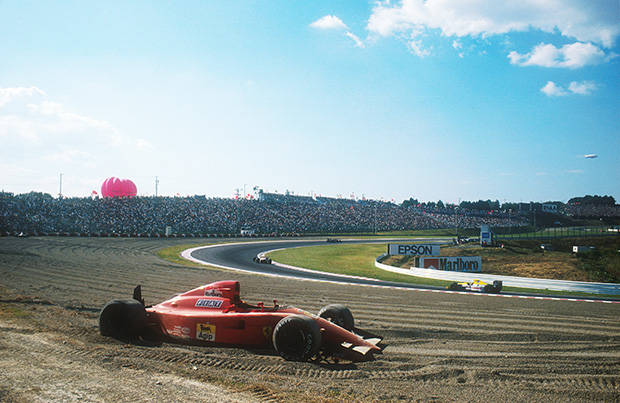 Schumacher did it again in Japan in 2003 – the last time Suzuka hosted a finale. He did so on this occasion with a single point for eighth place after being hung out in a shower during single-lap qualifying – he started from 14th – and an early pit stop for a new nose.

In 2011, a third place at Suzuka – the only time he’s failed to win this GP in the past five seasons – Vettel clinched his second title.

The most compelling occasion, though, was the first: Fuji 1976…

Barry Sheene, like James Hunt, was handsome, irreverent and hot news. As Britain’s newly crowned 500cc motorcycle world champion, he knew precisely what his F1 mate was going through; and as a fun-loving party animal, he knew exactly how he planned to play it. That’s why, while ostensibly in Japan for talks with his Suzuki paymasters, Sheene detoured to Fuji: to offer – in his own cheeky, chirpy words – “immoral support”. 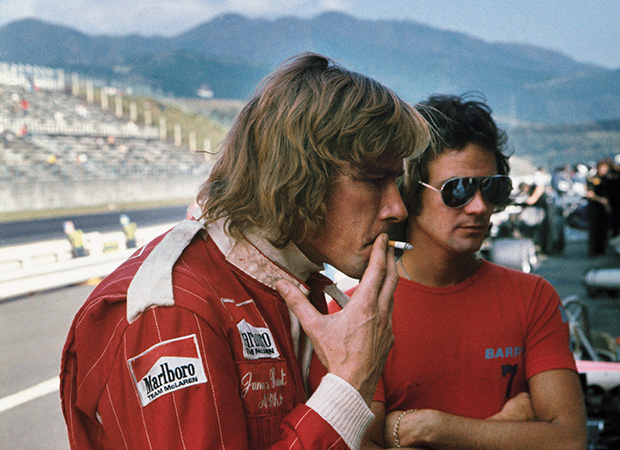 Hunt had been in Japan a fortnight, ostensibly to test at a circuit new to him. Delays at customs, car problems and bad weather had severely restricted his running, but at least now he was totally orientated and, in his inimitable fashion, ‘relaxed’. That meant when he wasn’t strutting his stuff on the hotel’s squash court, he was billing and cooing with its latest migratory flock of trolley dollies. It beat jogging.

Lauda arrived later, low-key and at a low ebb. The spirit that held the demons at bay during his remarkable Monza comeback had evaporated in Canada and America. Now running on empty, he was full of doubts. While Ferrari team manager Daniele Audetto attempted to whip up retro oppo to McLaren’s ‘illegal’ testing, his star driver looked the other way and wished it over: Lauda was sick of Enzo and his minions, of a season in its 10th month and of press intrusion.

Niki was plastered across front pages because of his near-death experience on the track; James was on them because of the life he led off it. Their battle and clashing personalities, though they were good friends, had made the world championship a global news shit-fight. Hunt, outgoing but often lonely in a crowd, pretended to be okay with it. Lauda didn’t.

Friday’s practice sessions provided blessed relief, therefore, even though both men suffered understeer on the stickier Goodyears made available to its faster teams because of the rare presence of Bridgestone and Dunlop on one-off Japanese entries. The title rivals finished the day one-hundredth apart on a provisional third row. 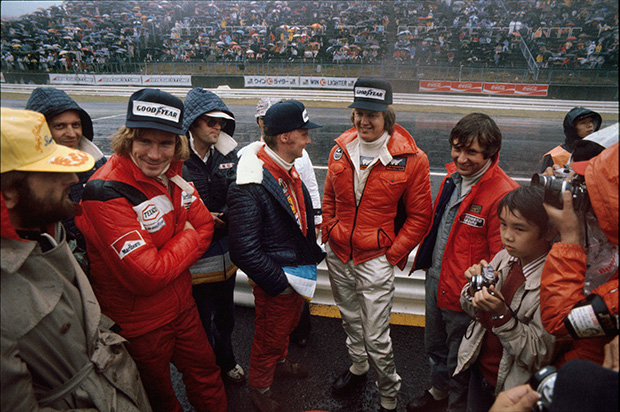 Each improved on Saturday – Hunt to second, Lauda to third – and James, a notoriously slow starter who, by his own estimation, needed to win the race in order to become world champion, was in a much-improved mood. Niki’s never budged.

The storm that swept in from China a day later than forecast was the last thing Lauda needed: another element beyond his control. Mist shrouded the snow cone of Mount Fuji, which supposedly bestowed good fortune – when visible – and Niki felt hemmed in by circumstance.

Not that Hunt was enamoured with the situation. He spoke privately with Lauda and agreed an attempt to have the race postponed – albeit not before he stressed that he would take the start if necessary and race as hard as Niki forced him to.

Hunt, nervously retching and hacking more than ever, was so distracted that he took a leak in full view of the spectators. Cue polite applause. Ominously, he then walked a plank laid across a puddle and stepped aboard his McLaren M23. He tipped his helmet back against its roll-hoop and closed his eyes in contemplation. Lauda, crushed by all that had gone before, hunched forward in his 312 T2’s cockpit. Both knew that fate was about to be sorely tempted. 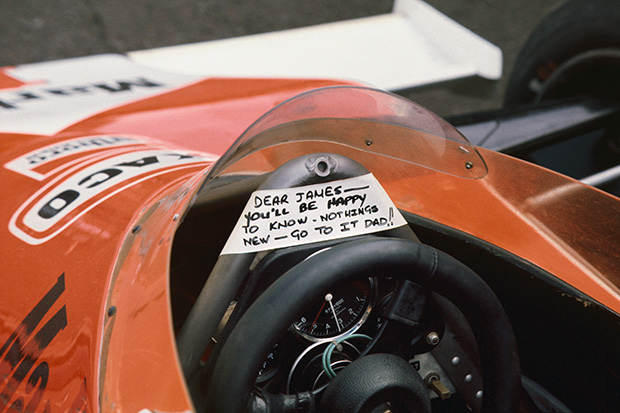 Hunt made a blinding start and held a huge lead by the end of the opening lap. As the rest pecked hesitantly in his rooster-tails, he was out of sight, both physically and metaphorically.

Meanwhile, Lauda, unable to blink because of his burn injuries, was drowning in the pack and questioning his sanity. He formulated an answer by lap two. The Ferrari – “a paper boat in a storm” – rolled into the pitlane and drew up at its garage. Measured. The team descended while designer Mauro Forghieri craned into its cockpit to ascertain the problem.

Sheene could have told him in a heartbeat. He knew precisely what Lauda was going through, too. Having recently suffered a horrendous 175mph crash himself, he was keenly aware that stuff that never used to bother him now played on his mind. He could see no reason why Niki wouldn’t feel the same.

Physical recovery was the easy bit.

Indeed, the reigning world champion had the skill but not the will to continue. It was “murder” out there – and life was for living. 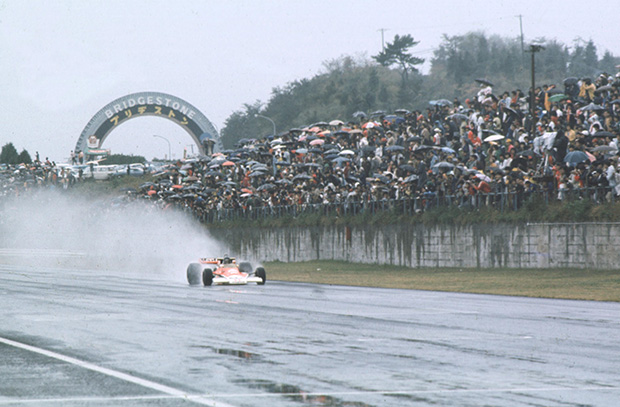 Hunt, as drivers without a world title feel compelled to, pressed on and kept his date with destiny. Hunt being Hunt, of course, he almost missed it. Not until his post-race red mist lifted could he be persuaded that he hadn’t.

Ten weeks later he arrived in Argentina to begin his title defence feeling underwhelmed and under-prepared. A few celebratory cigs and tins with Sheene at Fuji and a riotous return flight had been followed by a disorientating whirl of meetings, interviews and engagements. The race-by-race title chase had been thrilling: a sequence of one-day stands. Making it official had cooled the relationship. The love affair was over.

Niki, though, had a system – plus a plan to run his own airline – and ultimately would return to the F1 cockpit and be successful. James, whose theories were sometimes somewhat scrambled, would not. He bred budgies instead. You do what you have to do. 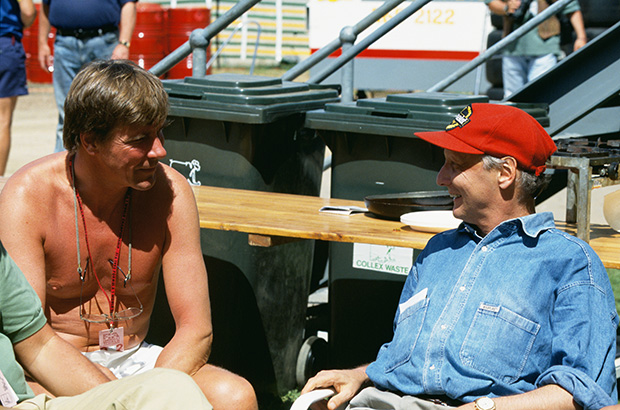 Hunt knew that life was for living, too. Tragically, however, he had just discovered how best to when fate too soon snatched it from him.