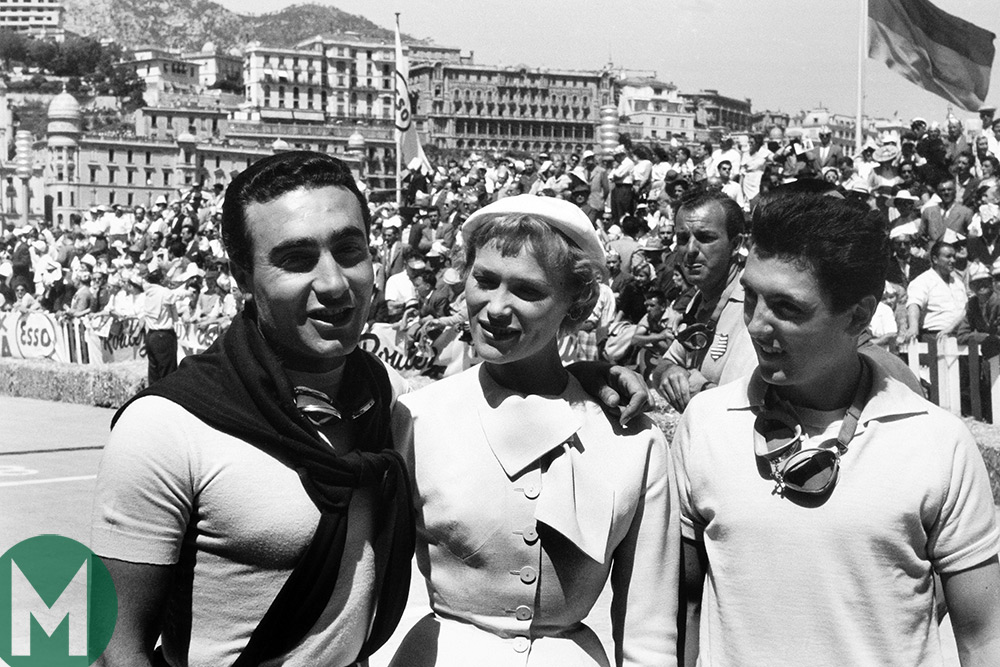 Moss and Jenks exchanged knowing glances across the cockpit of their Mercedes-Benz 300SLR as the car ahead of them weaved from verge to kerb and hurled tuffets of grass and bullets of rubber.

That was no way to win a Mille Miglia – and so they followed at a distance as safe as can be (un)reasonably expected while pulling 170mph on public roads.

Neither were surprised when Eugenio Castellotti’s hard-pressed Ferrari 121 LM stopped for new tyres at the next time control.

Nor would they be to hear that its 4.4-litre ‘six’ had wilted under the strain.

Yet 12 months later their roles would be reversed: Moss and Jenks’ untried and unwieldy Maserati 350S was propped against a tree – on the edge of a 300ft precipice! – as Castellotti scored the greatest victory of his tragically shortened career.

His nearest challenger – Ferrari team-mate Peter Collins in an 860 Monza 3.4-litre ‘four’ – was more than 12min in arrears.

His great Italian rival – north versus south – Luigi Musso of Rome was a further 22min back in the other Monza.

Castellotti had ended 1956 as the Champion of Italy

And world champion Juan Fangio, in the other 290MM, was almost 40 minutes behind in fourth place, soaked through, pale and shivering and grumbling about poor car preparation verging on sabotage.

The great Argentinean was giving his victorious team-mate – with whom he got on well and had shared the winning car at Sebring – almost 20 years’ head start.

So there was good reason to think that the improving Castellotti was Ferrari’s future.

He was catnip to the opposite sex.

By 1956 he was in a stormy relationship with ballerina turned famous actress/singer Delia Scala.

Clearly the air was cleared because a marriage date was set for April 1957.

Castellotti had ended 1956 as the Champion of Italy – though it had been Musso who’d shared the victorious Ferrari with Fangio in the Argentine GP opener and come within three laps and broken steering of winning the finale at Monza.

(Between times Musso had been sidelined by arm and rib injuries sustained in the Nürburgring 1000km.)

That Italian GP had been a fraught affair despite champion-elect Fangio’s efforts to soothe het-up team-mates and fellow front-row men by promising to step aside in the latter stages if they agreed to go easy to begin with and so save their tyres.

Fat chance! They each threw a rear tread on the fifth lap.

Although the taller Musso, six years Castellotti’s senior and squiring actress Fiamma Breschi, seemed the more self-confident, a gambling predilection was an unsettling force behind his scenes.

Both men had something to prove still and maturing to do during 1957 – in a team with more drivers than Formula 1 cars.

Castellotti led briefly in Argentina in January before joining Musso on the list of retirements.

They then joined forces to win the Buenos Aires 1000km in the Temple Buell-entered 290MM that was driven by Masten Gregory, too.

Castellotti had also shared the third-placed car – and at one point torn after Musso – after his original retired because of an ignition problem.

These were unsettling times at the Scuderia.

Castellotti was undoubtedly emotional. His pole position for the 1955 Belgian GP at Spa, set just before rain swept in, had been in response to the recent death of his Lancia team leader, idol and inspiration Alberto Ascari.

Jenks, hardly the most emotionally touchy-feely of journalists, saw how great a toll this effort had taken from a young man at only his third world championship GP and “couldn’t help but fear for him in the race.”

No match for the Mercedes-Benz W196s of Fangio and Moss, Castellotti’s D50’s gearbox failed not long before half-distance.

Whereupon Scuderia Ferrari commandeered him as part of Fiat’s purchase and redistribution of bankrupt Lancia.

A driver’s stock at Maranello was rarely high.

So when Enzo summoned him in mid-March, Castellotti reluctantly cut short a break with his bride-to-be in Florence and first thing sped over some of the same mountain roads on which he had starred only months before.

His task this time, however, was more menial: Jean Behra had broken the lap record while testing for neighbours Maserati at the walled Modena aerodrome circuit and a piqued Enzo wanted it back.

Castellotti’s mood can be imagined.

He had seen first-hand the consequences of mental unpreparedness: Ascari had been wearing Castellotti’s crash helmet when he took the latter’s Ferrari sportscar for a quick spin around Monza – on a brand of tyre new to him.

Some say that the twice world champion’s arrival that fateful May 1955 day was unannounced, others that he had been invited and then persuaded by Castellotti to step aboard.

Now Enzo reckoned the latter to be “bitter and absent in his manner” as he set off at Modena and blamed his driver’s “confused and conflicting time” for what happened next.

The blaring Ferrari clipped a high kerb at the chicane on its second lap – the spectating Behra reckoned it to have been in neutral at the time – and flew high into a grandstand, coming to crumpled rest against its brick back wall.

Castellotti, 26, had been thrown out. ‘Il Bello’ was dead.

Musso was forlornly quoted in Rome’s Paese Sera newspaper: “Now I am alone.” Self-centred at its surface, it had a deeper meaning and ultimately chilling denouement.

And Castellotti would today (Wednesday) have been 88.