Charles Leclerc will start on pole position for tomorrow’s Azerbaijan Grand Prix, posting a lap almost 0.3sec faster than anybody else after a close qualifying session.

The Ferrari driver said that he didn’t expect to be able to beat the Red Bulls after they topped the first two qualifying sessions, but that his final lap came together to decisively claim pole.

He will have a Red Bull alongside him and one behind after Carlos Sainz was forced to pull out of his final flying lap to avoid hitting a barrier.

The tight sections of the Baku circuit caught plenty of drivers out, with several of them brushing the barriers. Both Aston Martins crashed into them; proving terminal for Lance Stroll‘s qualifying and derailing Sebastian Vettel‘s session.

“It feels good,” said Leclerc. “This one I probably did not expect because I thought Red Bull was stronger but in the last lap everything came together. I’m really excited for tomorrow”.

Lance Stroll will start tomorrow in 19th place after hitting the wall twice in two laps, ending up stranded at Turn 2 and triggering a red flag towards the end of Q1.

That set up a busy shootout, with 13 cars on track and two-and-a-half minutes remaining. Lewis Hamilton and Daniel Ricciardo were among the drivers at risk, and just above the drop zone.

At the restart, there was only just enough time for all cars on track to have another flying lap; Mick Schumacher only just making it across the line with seconds to spare, but it didn’t help him. The Haas driver was eliminated along with his team-mate Kevin Magnussen, both Williams drivers and Stroll, while Verstappen headed the session, a hundredth ahead of his team-mate.

The second session saw more cars meet the wall. Vettel slid head-on into the barrier at Turn 15 under braking, and managed to recover, while Verstappen, Leclerc and Yuki Tsunoda were among those to brush the hoardings.

Both McLarens were in the drop zone as the clock ran down and Lando Norris did his Q3 hopes no favours when he ran down the escape road at Turn 15. Both he and Daniel Ricciardo were eliminated, along with Esteban Ocon, Zhou Guanyu and Valtteri Bottas.

Sergio Perez was fastest in Q2, a tenth of a second ahead of Leclerc, with Sainz and Verstappen close behind.

Stewards said that they would look into Hamilton’s driving after he was driving slowly and apparently holding up Norris. 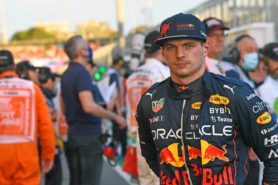 'We earn our multi-million pound F1 salaries by risking our lives,' says Verstappen

Going fast looked to be an unappealing prospect as the Mercedes bounced vigorously. In Q3, Hamilton complained of a “dangerous” amount of porpoising on the fast 1.4 mile stretch that includes the main straight.

At the top of the table, the top four drivers were split by just 0.18sec, with Sainz heading his team-mate and the two Red Bulls.

Both teams were sending their cars out in formation so at least one driver got a tow on the long straight, but Red Bull’s plans went awry when the team couldn’t initially start Perez’s engine ahead of the final lap and both cars were sent out separately for their final runs.

Charles Leclerc moved to head the table as the times came in, with a 1min 41.359sec lap — half a second better than his previous effort. Carlos Sainz lost his chance when had to back out of the battle to avoid hitting the barriers after running wide.

Verstappen didn’t have an answer when he crossed the line, posting a 1min 41.706sec lap. That left Perez, racing towards the finishing line, with paper-thin gaps to the barriers. He was quicker than Verstappen but couldn’t match the Ferraris.

Behind them George Russell, Pierre Gasly and Lewis Hamilton were within 0.2sec of each other.

“The start of the lap was good then it went away from me after a while,” said Verstappen who complained that he was struggling to find front and rear balance over one lap.

He was more upbeat about the team’s chances in the race from their second and third grid positions. “We seem to lack a tiny bit over one lap but in the long run our car should be good,” he said.