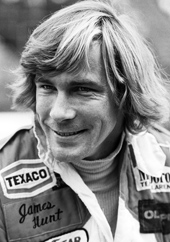 Imagine if James Hunt was still around today, I mused to Martin Brundle at Daytona a few weeks ago. “Well, if he was I’d be out of a job!”, the BBC’s new lead commentator fired back.

The truth would probably be somewhat different. Hunt, who died of a heart attack at the age of just 45, would have struggled to hold on to a high-profile media role in the modern world. Richard Keys and Andy Gray would have had nothing on Master James! Had he lived, he’d have said something outrageous long ago and would probably have been handed his cards after a short and very nasty tabloid campaign against him. After this, I like to think he would have settled down into his new role as an outspoken, politically incorrect star columnist here at Motor Sport… and how refreshingly outspoken and irreverent those columns would have been. Such a shame he was taken from us all so early.

Hunt was a brilliant, instinctive broadcaster during his time sharing a mike with the long-suffering Murray Walker from 1980-93, in much the same way that he was a brilliant, instinctive racing driver. He shot from the hip and carried lasting prejudices (yes, poor Riccardo Patrese), and that attitude would not have sat well in this sensitive age. Can you imagine the froth that would have been generated on the web forums if Hunt was broadcasting today? They’d have loved him and lynched him.

For me, Hunt was all the greater because of his imperfections (He once turned me down for an autograph at a Brands Hatch Grand Prix because he was late for the celebrity race. Somehow, I didn’t mind  – because it was him. Even as a kid I was aware of his reputation for timing, so found the polite but firm ‘no’ and the mad rush he was in very amusing).

He took his racing intensely seriously, to the extreme of vomiting before the starts and so on, because he knew only too well how dangerous was his chosen vocation. But at the same time he refused to take life seriously away from the races – which is exactly why he agreed to pose for Patrick Lichfield’s cheeky photoshoot that adorns the cover of the April issue.

Nubile young ladies on the cover of Motor Sport? Sacrilege! Mr Tee (Motor Sport’s former proprietor) must be spinning… But if there is an image that sums up the man our writer Eoin Young struggled so hard to like, it’s this one. All that’s missing is a bottle of something strong and a fag in his mouth. Like James, we don’t like to take life too seriously here at Motor Sport, and we couldn’t resist. Especially as it highlights once again how different our world is today compared to the 1970s. Can you imagine Jenson Button taking part in such a photo shoot? (I can actually – but I don’t think McLaren, Vodafone etc would like it much! Imagine the airbrushing…)

Eoin was James’s original – and very reluctant – biographer. His personal impressions of a man who he came to know well, and eventually like a great deal, are fascinating. For those of us who only knew him as an image in photographs or as a voice on television, they are truly revealing. Incidentally, Eoin lives back in New Zealand these days and we were alarmed to hear this week of the dreadful earthquake that has devastated Christchurch. We were relieved to hear that Eoin was unhurt, although he has suffered damage to his property. From everyone at the magazine, and I’m sure all of you who read it, we send you our best wishes, Eoin.

James Hunt pops up again elsewhere in the April issue, his serious racing side highlighted within Rob Widdows’ entertaining Dispatches column on an eye-opening trip to Monaco with Hesketh Racing, and also within this month’s riveting Lunch with Murray Walker. Now, you won’t be surprised to read that Murray was typically eloquent when Simon Taylor met up with him recently. But even for Murray, this one is special. Despite suffering from a heavy bout of ’flu, he saved his best form for Motor Sport. I’ve never read a more frank and insightful piece on a man who is always a great interview.

We also look ahead to the forthcoming F1 season, with a bumper preview featuring Nigel Roebuck in discussion with Sir Jackie Stewart, a definitive explanation of the new rules – including those gimmicky moveable rear wings – and a study of the overtaking debate by former Renault technical boss Pat Symonds. Since we went to press, the Bahrain GP has been cancelled, of course, so we’re down to ‘only’ 19 races beginning in Australia on March 27. Within our issue, Jackie Stewart has some strong words on the circuits that F1 visits today and the changes that he believes are needed to inject a greater challenge into the sport. We quite agree.

You can also read our verdict on the new McLaren MP4-12C road car, find out more about Mini’s return to world rallying and catch up with comeback kings Martin Brundle and Mark Blundell during their impressive return to the cockpit at the Rolex Daytona 24 Hours.

Before I close, I should mention that our founder editor Bill Boddy celebrated his birthday this week. On February 22 WB turned 98 years old. His stories continue to file into our inbox for each issue and the magazine simply would not be the same without him. Happy birthday, WB, from all the team at Motor Sport.