The radio messages were relatively muted, but the satisfaction ran deep. Mark Webber is rarely given the credit he’s due, but the 12th pole position of his Formula 1 career – his first since Korea 2012 – came at the end of a day during which he was quite simply Red Bull’s most effective performer. He might be counting down his days at the sport’s top table, but this was the perfect start to his Suzuka swansong. The Australian has always been a fan of ballsy circuits and for 1min 30.975sec he was absolutely in his element. 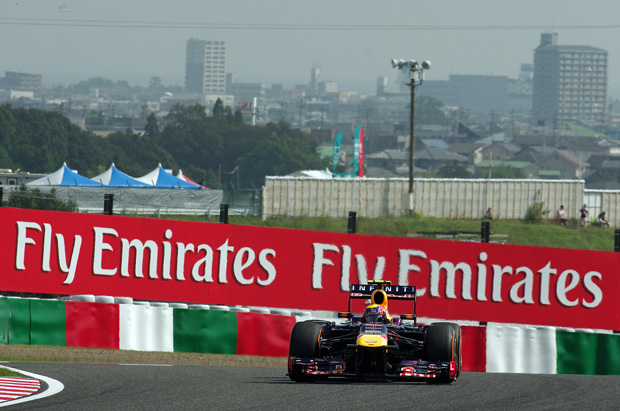 Webber conceded that this was a slightly hollow outcome, because team-mate Sebastian Vettel had been hobbled by intermittent KERS problems that limited him to only a few free practice laps and struck again during qualifying. “You have to take these things when you can, though,” he said, “because they aren’t just handed out. It was a bit of a mixed day, with people switching between hard and medium tyres, then scrubbed and unscrubbed, but this is a nice way to bow out at Suzuka. It’s a great track, we all enjoy driving here and I’ll never forget the final time I drove through the first sector today.”

Vettel managed only eight laps in the morning, when his KERS battery had to be changed, but the system still wasn’t right when it mattered. “I don’t think I was badly affected in terms of preparing or settling into a rhythm,” he said, “because I have done plenty of laps here. I did have a few problems, but I’m not a big fan of making excuses. We’ll go through everything this evening and I’m sure we’ll get it fixed.” He had a significant wobble at Spoon on his first run, then locked his front left at the hairpin on his second. “Given the circumstances,” Webber said, “I think Seb did a pretty phenomenal lap.”

Webber’s pole was Renault’s 209th as an F1 engine supplier – a new record that puts the company one ahead of Ferrari.

As expected, Mercedes provided the closest challenge… although the gap was a touch wider than Friday’s artificial infusion suggested. Lewis Hamilton was 0.264sec back in third and said, “I’m really happy with that. Realistically, it would have been almost impossible to get ahead of these guys, because they’ve had a better package for a long time. My car felt awesome – so I can only imagine how theirs must have been. The circuit has changed a lot since yesterday, because the wind has turned through 180 degrees, but we’re expecting conditions to be similar tomorrow.” 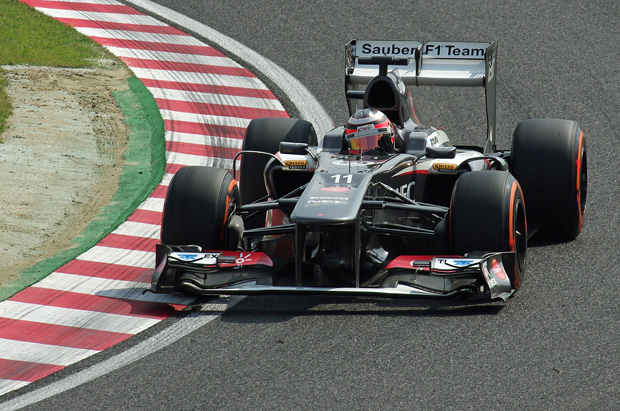 Romain Grosjean took fourth for Lotus, ahead of Felipe Massa. The Brazilian made it quite plain that he’ll be driving his own race tomorrow – “I have no need to fight for Fernando any more” – but needs to summon some of the Saturday vim that so frequently deserts him during races. Alonso lines up back in eighth – and concedes that it is only a matter of time before Vettel puts the title beyond his reach. “We have been seventh to ninth in every session,” he said, “so this is more or less what I expected. If Sebastian doesn’t win the title here, he’ll do it in India or Abu Dhabi. We usually do better in the races and our main goal has to be getting ahead of the Mercedes drivers, to help us retain second place in the championship for constructors. That’s the most important thing. Do I feel frustrated? Not really. We’ve been a second slower than Red Bull for the past four seasons, so today’s result is no surprise.”

Reprimanded in the morning, for tripping Caterham driver Charles Pic, Nico Rosberg took sixth ahead of effervescent namesake Hülkenberg, who did yet another fine job for Sauber. It is an enduring mystery that the German still has no guaranteed employment for 2014. He escaped censure following an incident in final practice, when he was summoned to the stewards for impeding Max Chilton, but Sauber was fined €20,000 for giving its driver misleading radio information.

Behind Alonso, Kimi Räikkönen and Jenson Button completed the top 10 – but there is potentially brighter news on the horizon for the Englishman and McLaren. The team on the verge of re-employing aerodynamicist Peter Prodromou, who has recently been in charge of aero operations at Red Bull. That notwithstanding, the MP4-28 felt good during qualifying. “I think the change of wind direction helped,” Button said. “We had a tailwind pushing us down the main straight, then a strong headwind giving us extra downforce through the first sector. I might be nine tenths off pole, but the car felt great.”

Sergio Pérez was best of the rest, ahead of Paul di Resta, Suzuka sophomore Valtteri Bottas (who practised here last year and has driven rings around Pastor Maldonado throughout the first two days… without hitting any tyre walls) and Esteban Gutiérrez, who had to hop from his car during Q1 when it briefly ignited in the garage. The incident was swiftly controlled and he was soon back on track.

It was a miserable day for di Resta’s team-mate Adrian Sutil. He crashed at Spoon during the morning, was knocked out of qualifying at the first hurdle and then received a five-place grid penalty for an unscheduled gearbox change, dropping him from 17th to last.

Toro Rosso driver Jean-Eric Vergne’s day came to a spectacular end when a brake circuit fire developed towards the end of Q1, which had to be red-flagged as a consequence. It took a while to extinguish the flames, but the Frenchman’s chassis was not seriously damaged. 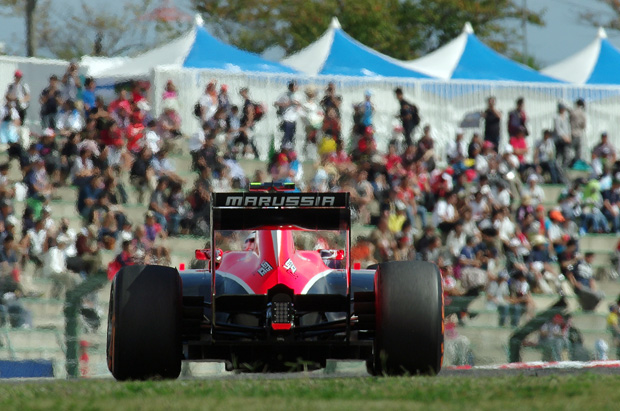 At the back, Chilton put in one of his best laps of the campaign to secure the unofficial Class B pole, outpacing team-mate Jules Bianchi by six tenths and, more impressively, beating Charles Pic and Giedo van der Garde at a track that should have suited the Caterhams rather better than it did the Marussia.