Sebastian Vettel (1st)
A quite brilliant weekend for Vettel. Lost a little time in his first pit stop due to Heidfeld passing, but the German was in a class of his own. Even though he’d never raced at Suzuka Vettel produced one of the most dominant drives of the season. 10/10 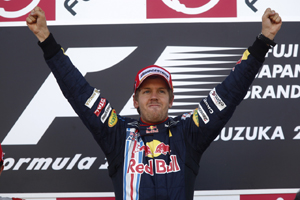 Jarno Trulli (2nd)
Lost out to Hamilton’s boost button at the start, but never let him get too far ahead and eventually jumped him at the second stops. Quite where he was last weekend in Singapore is anybody’s guess. However, he was right on it in Japan. Great drive. 9.5/10

Lewis Hamilton (3rd)
Made a good start and looked to be in control of Trulli until the latter part of the race when his KERS system decided to pack up and go home, and his car went into neutral while leaving the pits. Lacked downforce in the first sector, but I suggest this was as good as it could have got for McLaren this weekend. 8/10

Kimi Räikkönen (4th)
How on earth does Räikkönen, with no more development being done on the car this year, manage to pick up five points? By driving quite superbly. It’s now certain that he won’t be at Ferrari next year, but he’s doing a fairly good job of trying to make the team doubt that decision. 9/10

Nico Rosberg (5th)
The timing of his second stop, just as the safety car was deployed, certainly helped him. However, you can’t say too much against Rosberg since, once again, he delivered while his team-mate was pottering about in 15th. By no means his best weekend, but he’ll be a happy man to take home four points. 7/10

Nick Heidfeld (6th)
Lost some time in his second stop after a wheel nut got stuck and also lost a place to Rosberg with the timing of the safety car so was unlucky not to be placed higher up. Having said that he did spend a certain amount of time with his team-mate trying to get past him. I think we can safely say there are no team orders at BMW… 7.5/10

Rubens Barrichello (7th)
A qualifying penalty effectively ruined Barrichello’s afternoon, but in the race his pace wasn’t consistently great. Where in the first stint he made Button look somewhat average, he was much slower in the second stint. He won’t be robbing Button of the title with performances like this. 6/10 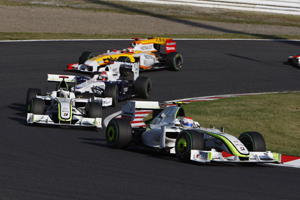 Jenson Button (8th)
The fact that he managed to cruise past Sutil and Kovalainen when they collided in the first stint pretty much summed up how lucky Button has been in the second part of the season. Spent much of the race in dirty air, but when he was in the clear he was certainly quick enough to have finished higher up. 6/10

Robert Kubica (9th)
A good battle with team-mate Heidfeld probably didn’t consol Kubica too much after so narrowly missing out on a point. He was trying everything he could to get past Button after the safety car, but it just wasn’t enough. A strong race though and good to see BMW away from the back of the grid. 6.5/10

Fernando Alonso (10th)
A single-stop strategy meant Alonso struggled with faster cars in the opening stint, but thanks to a strong drive he did manage to eventually salvage 10th. Something I doubt he could have done much better than considering how unsuited the Renault was to the twists and turns of Suzuka. 7/10 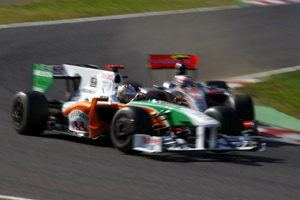 Heikki Kovalainen (11th)
Running much slower than Hamilton in the opening stint (with fuel weights taken into account) and then collided with Sutil. Having left the door open for him he promptly shut it at the following corner. As Coulthard put it, he was “fighting too late”. An absolutely superb pass on a sleepy Fisichella on the way out of the pits brightened his afternoon a bit. 5/10

Giancarlo Fisichella (12th)
Fisi still seems to be struggling to get to grips with the Ferrari, but his race pace has picked up. What he could do with just one days testing would be interesting to see, however, with a team-mate like Räikkönen he’s never going to look (itals) that (end itals) quick. 5/10

Adrian Sutil (13th)
Unlucky to be tagged by Kovalainen after he got past the Finn and be demoted to 12th. An afternoon of being stuck behind slower cars meant that he stayed there. The straight line speed of the Force India is quite phenomenal, what it’s like to actually get round a corner must be something else… 6/10 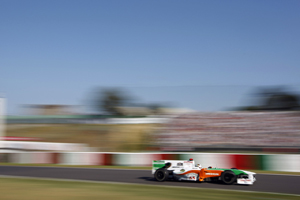 Vitantonio Liuzzi (14th)
A good overtake on Nakajima in the second stint and also passed Alonso a couple of times throughout the race. However, I suggest he’s another victim of the lack of testing. A shame, especially after his debut at Monza. 5.5/10

Kazuki Nakajima (15th)
Stuck in traffic for most of the race and even when he wasn’t, Nakajima didn’t exactly set the lap timing sheets alight. A weekend to forget, and there’ve been too many of those from the Japanese driver. 4/10

Romain Grosjean (16th)
A very heavy car meant that he had chronic understeer. He went wide in the second stint to let Sutil through, which is just another mistake in a Formula 1 career with too many mistakes. Again, I’m sure he wouldn’t mind a bit of testing… 4/10

Mark Webber (17th)
Where to start? He pitted five times, started from the pitlane and had one of those races where a lesser racer would have driven straight into the garage and left the car there. He didn’t though and went out – three laps down – to post the fastest lap of the race even though he was fighting… well, for nothing. Superb. 8/10

Jaime Alguersuari (RET – 18th)
He may have been held up in the first stint, but he didn’t help lower Toro Rosso’s giant bill for their drivers crashing their cars during the weekend by losing it at 130R. 3/10 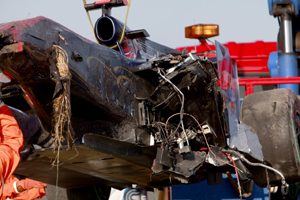 Sebastien Buemi (RET – 19th)
Not an ideal weekend for Buemi after crashing during qualifying and then his clutch going wrong in the race. 2/10