“Without a moment’s hesitation Jean-Pierre executed a perfect handbrake turn. In a great big Mercedes V8 saloon. In the wet. On a street of modest width. With cars parked either side. 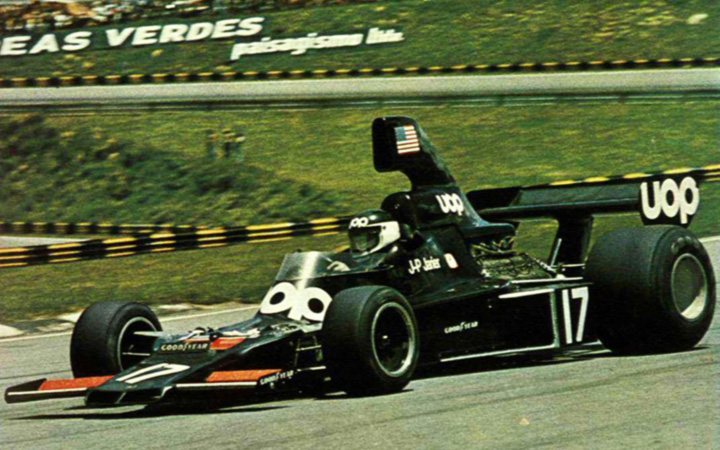 “And he never stopped talking throughout.

“[Team manager] Alan Rees looked at me and we giggled. That was Jarier.” 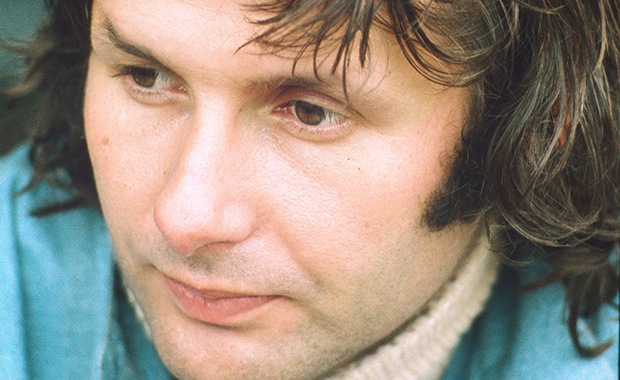 This spectacular arrival of Shadow Racing Team’s top brass and number one driver at the Paris café launch of its 1975 Formula 1 challenger proved apposite.

Forty years ago this month Jarier starred at the opening South American rounds of the world championship aboard Tony Southgate’s DN5 design.

Sadly, however, two magnificent pole positions would result only in heartache.

According to Motor Sport reporter Alan Henry, the ebullient Frenchman’s late-braking, opposite-locking assault on the infield section at Buenos Aires “bordered on imprudent”.

Yet nobody could get within four-tenths of him during qualifying.

As a result, there were whispers of favours received from Shadow’s Northants neighbour Cosworth.

“I wish,” says Southgate. “We were never that high in the pecking order.

“John Judd did our engines and we paid him for a small development programme: different lengths of trumpet, megaphone exhausts. But you’re talking no more than 10-15bhp.” 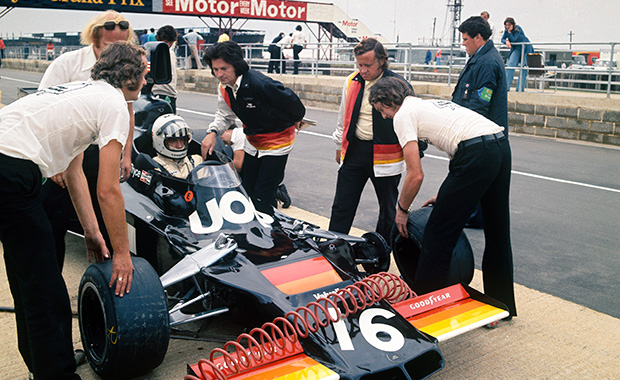 The root of the sudden turn of speed lay elsewhere: DN5 had broken new (moving) ground.

“I spent half my life doing aero at Imperial College,” says Southgate. “And DN5 was the first to use its new rolling-road wind tunnel. As far as I know, it was the first in the world.

“What we discovered was a massive split, front to back, in downforce. People had always thought that they had about 30-40 per cent on the front. In fact it was no more than 20.

Southgate moved his driver forward 2.5in within a longer wheelbase (with removable 4in spacer between engine and gearbox), developed deeper nose fins and placed springs and dampers inboard.

“The car was an aero jump. We matched downforce to its static weight distribution – about 35/65 – and the spacer allowed us to tune the chassis to different circuits; we would find 1.25sec at Silverstone just by removing it. 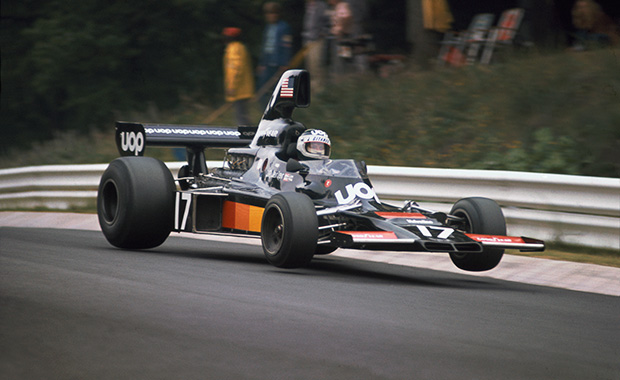 “Immediately it was clear that our car had more downforce than the others and was very well balanced. [In its short-chassis specification] Jarier was taking the fast bend after the pits at Interlagos without lifting and I remember Roger Penske being very impressed by that.”

On this occasion nobody could get within eight-tenths of him.

And on this occasion he appeared to have rid himself of bad luck before race day, a fresh DFV failing while running on full tanks during the final practice session.

In Argentina, a crown wheel-and-pinion fitted overnight by way of precaution had swallowed some teeth on the way to the grid.

“I had been persuaded to use Hewland’s latest TL200 gearbox instead of its FGA400,” says Southgate. “I think only we and Copersucar did so. It was meant to be more reliable, with helical gears 20 per cent stronger and more bearings in the pinion shaft.”

Improper heat treatment was blamed for the failure. 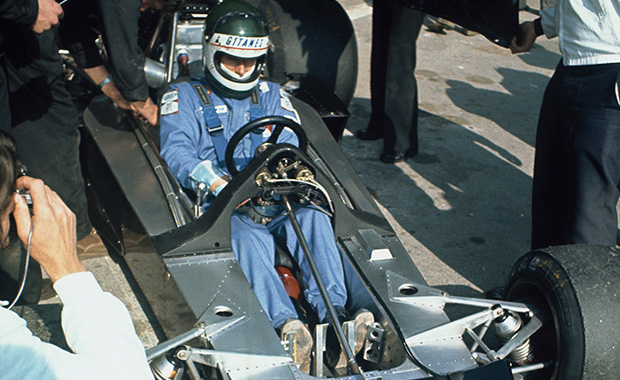 Heat would strike elsewhere in Brazil.

Brabham’s Carlos Reutemann anticipated the start to lead from the second row, but his decision to fit a harder front-right Goodyear soon counted against him: Jarier sliced by at the start of lap five.

Already 2sec to the good by the end of that 4.9-mile lap, the dark Shadow continued to pull away as a train developed behind the hampered Reutemann; its lead at half-distance was beyond 20sec.

“Jean-Pierre wasn’t a finisher,” admits Southgate. “When he was leading you were waiting for something to go wrong. He wasn’t mechanically sympathetic. He just wanted to drive flat out and so tended to find a car’s weak spot.”

Leading August’s non-championship Swiss Grand Prix at Dijon-Prenois, his DN5’s transmission failed before half-distance. He had, according to Autocourse, been “driving as fast and untidily – but so entertainingly – as only he knows.” 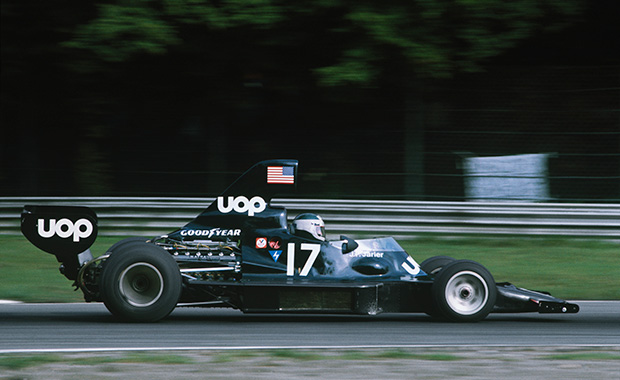 There was, however, no suggestion of this occurring in Brazil. Having conclusively broken the tow on lap 10 with the race’s fastest lap – 4.3sec slower than his pole – Jarier eased off while continuing to extend his advantage.

The man who had dominated the 1973 European Formula 2 Championship now looked entirely at home in F1.

At which point Carlos Pace, having passed his stubborn Brabham team-mate for second place on lap 14, steadied the gap before beginning to reduce it.

The Shadow’s throttles were occasionally sticking shut and, on lap 33 (of 40), they jammed when the metering arm of its Lucas fuel injection seized. Sans sponsor UOP’s lead-free, Jarier coasted, alighted and slumped against the barrier.

“When the mechanics retrieved the car after the race they fired it up and drove it to the pits,” says Southgate. “The unit had simply got too hot even though the engine was open to the airflow.”

Jarier’s entire season would be a rolling boil of frustration. With spins punctuating mechanical failures, he scored just 1.5 points: a contentious fourth place – he was docked a place for overtaking under yellows – at Montjuïc’s ill-fated and prematurely halted Spanish GP. 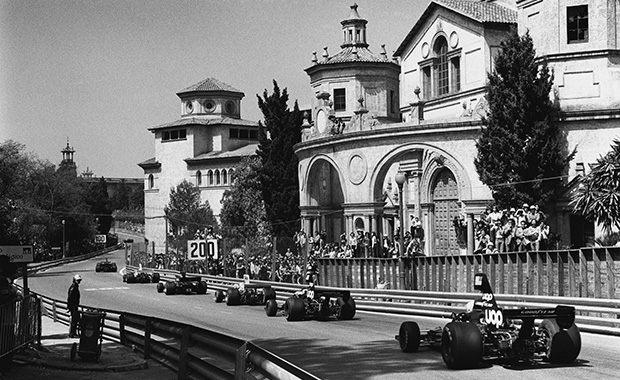 “Our budget was tight and there was little development of the car,” says Southgate. “It wasn’t good on fast circuits where we had to unbolt its downforce so we weren’t swamped on the straights.

“Plus better-funded teams cottoned onto what we were doing and were ringing Imperial College to ask if they could use its wind tunnel.

“Our speed was still there on occasion: at Silverstone and Monaco, for example. But Jean-Pierre tried to win the latter on the first lap.”

In the wet, on a street of moderate width, he hit the barriers three times while hassling Niki Lauda’s leading Ferrari. His eventual spectacular and ragged departure at Tabac was apposite.

For that, too, was Jarier.

Jarier will be reunited with this very DN5 at Goodwood’s 73rd Members’ Meeting. He’ll drive it in the parade for high-airbox F1 cars (of which there are now over 20). The unique Shadow DN7-Matra, which Jarier raced only twice in ’75, will also be there. A small number of tickets for non-members are left. To buy one, click here.