The designer of Formula 1’s new Jeddah street circuit has said dismissed the safety concerns some within the sport have expressed about its high-speed nature, saying “This is what the people want.”

The Jeddah Corniche Circuit, which was completed in record time of just over a year, is the fastest street circuit ever created, with a 27-corner lap taken at 79% throttle. Its architect Carsten Tilke – son of famed track designer Hermann – believes this new racing concept’s safety provision is sound though.

Speculation as to the circuit’s safety has mounted in the run-up to the event, with Red Bull boss Christian Horner describing it as “insane –Suzuka with walls” whilst Damon Hill has expressed his concern over the “high jeopardy” of the track – however Tilke remains unconcerned.

“Actually not,” he said when asked by Motor Sport if any worries had been expressed directly to him. “Of course we have worked closely with the FIA. We have our experience too.

New Jeddah F1 track is going to significantly reward the brave and accurate. Multiple series of very high speed corners between walls where there’ll absolutely be no small accidents. 27 turns of which about 14 will be recognised by an F1 car, but there’s peril everywhere pic.twitter.com/lNPpZ6bJ1s

“We need to make it challenging, we need to make it thrilling and I think this is what the people want. The FIA check everything, do the safety inspections, the safety simulations – which we also do in house – but at the end, the decision lies at their table.

“Every track needs a Grade One certificate. If you don’t get this this, you’re not able to race with Formula 1.”

F1 has introduced the SAFER concept, first used in the US in oval racing, into its barrier design in recent years, and this is crucial to the safety aspect of Jeddah.

Standing for Steel and Foam Energy Reduction, the barrier is made of steel tubes welded together which are attached to the existing wall. Behind the tubes is a polystyrene foam, with the structure designed to allow energy to both dissipate over a longer distance down the wall and not propel the crashing car back into traffic.

“We used SAFER for the first time in Baku, where we also have this some very fast corners without runoffs,” says Tilke. 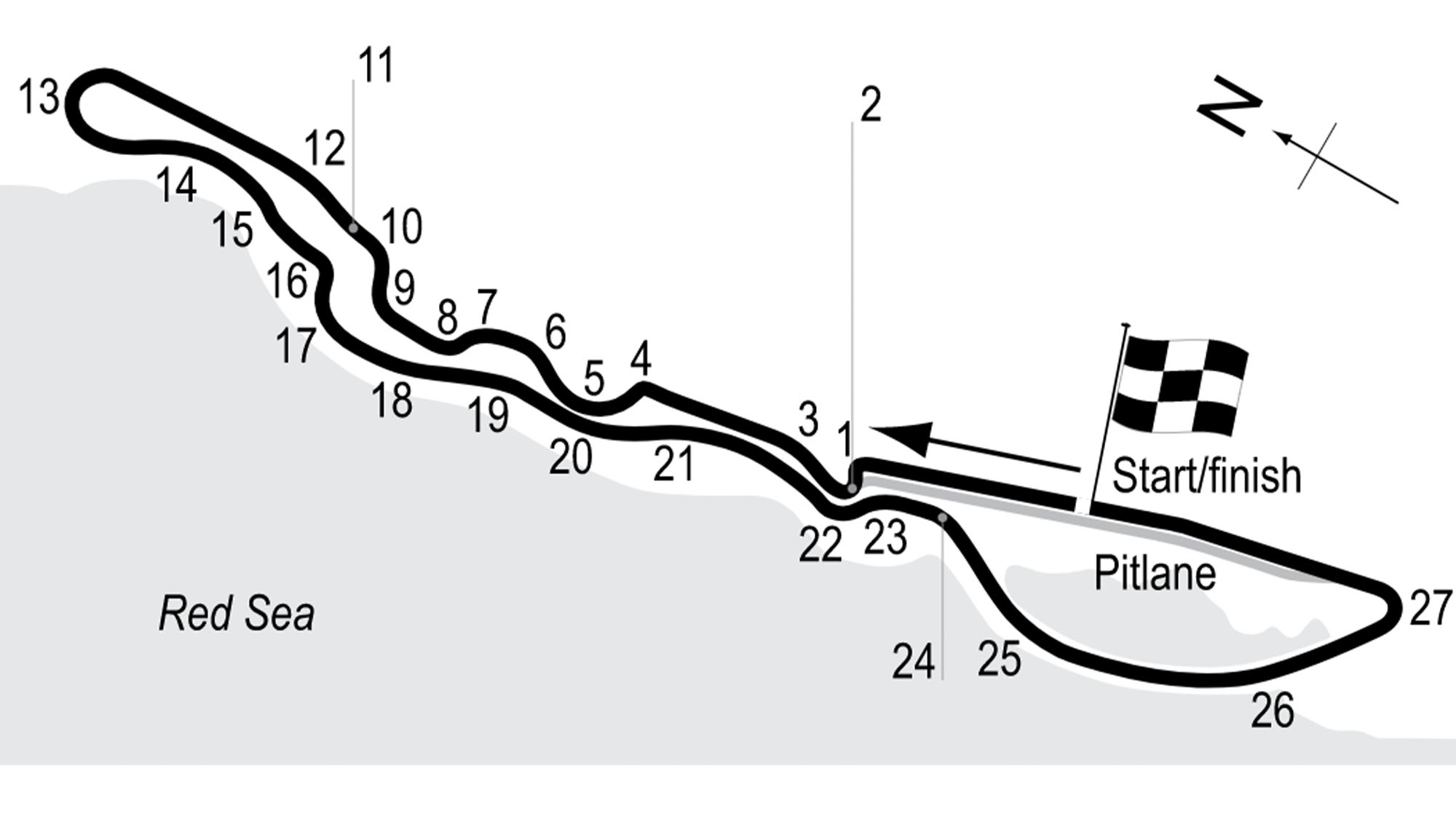 The circuit presents a challenge like no other in F1

“But for sure, it’s a street circuit, better not to make a mistake.”

Despite the safety concerns expressed, Tilke is clearly brimming with pride for his new circuit, believing he and his team have created a challenge like no other.

“I think it’s a really unique layout, you cannot compare it so much with other tracks,” he told Motor Sport. “It’s not a typical street circuit, where you have existing streets which brings 90-degree corners going around buildings. We were a little bit more flexible in creating a very fast, flowing design.”

What brought about this flexibility was the blank canvas Tilke and his team were given to work on – turning the sometime street circuit cliche of ‘racing in a car park,’ on its head.

“Most of the area was just an asphalt, they used it for parking – they had a Covid Test Center Centrum or something like this,” he said. “We worked very closely together with Formula 1 to develop the track to bring the most atmosphere to make it most exciting for the drivers and for the fans.

“So very exciting for me will be to see section T4 to T10-11 then into the esses combination, where you’re very fast. After that you’re going in into Turn 13 with 12% banking. 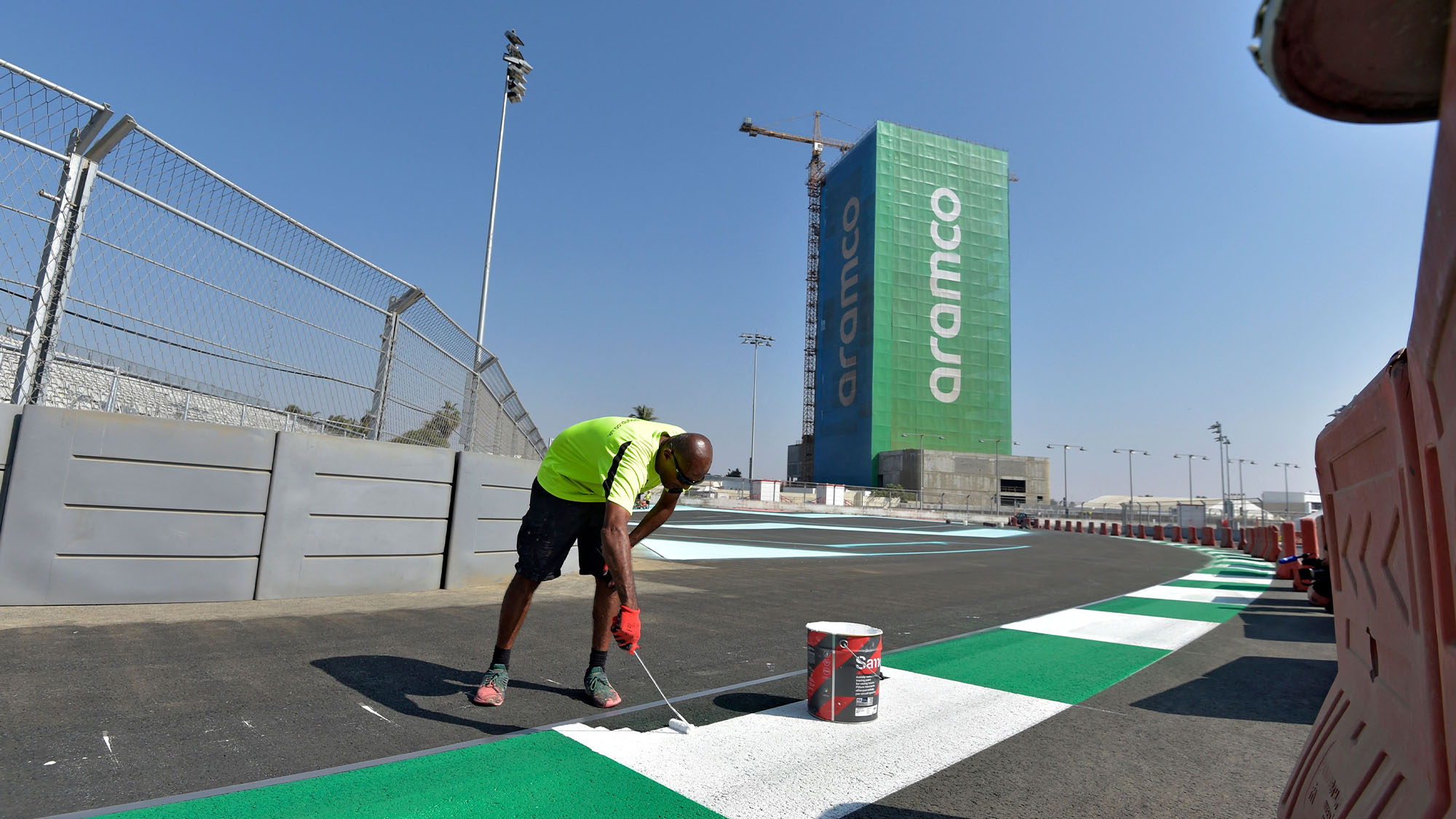 Work on the circuit has gone down to the wire

“We’re excited to see different racing lines, maybe there and different approaches to this corner.

“It’s really cool, because if you’re standing there you see that the banking increases when you go into it. It seems that the corner is never-ending, because you’re not seeing the exit till very late.

“Then you have a long passage of full-speed corners, followed by a corner combination where you have to brake but not too much. You see the braking point quite late.

“I think it will be challenging to make a good lap, but let’s see what the drivers say tomorrow.”

Amongst various challenges brought about by the seafront location include the torrential rain which hits not very often, but hard when it does, as well as the record time it was built in.

“It’s not like a normal street circuit – all the streets are built completely new and have an integrated a new drainage system,” Tilke explains. “So we had to lift the track almost everywhere [off the original asphalt surface by] minimum one and a half metres, to make sure it dries fast.

“This was also the tightest schedule we’ve had and the one where we had the most pressure to really deliver. It’s one year since we started designing it and construction even less, we had only eight months.”

Despite the various challenges of building a seafront circuit on the edge of a desert in record time, Tilke believes he and his team have provided something different for motor sport fans.

“For the spectators, it’s also nice that the two parts of the track are always very close to each other because the plot was so narrow,” he says. “So you go from Turn 1 to Turn 13, then you turn around you come back.

“So when you when you add the grandstands, so you’re not just seeing one corner or one straight, you’re seeing always two different areas. It makes it really cool I think for the fan experience.”